Most melanomas identified in the stomach are metastatic; primary gastric melanoma (PGM) is extremely rare, and the relevant studies are relatively scarce. PGM may be incorrectly diagnosed as other gastric malignant tumor types.

We describe a rare case of PGM confirmed through long-term clinical observation and pathological diagnosis. A 67-year-old woman presented to our hospital with recurrent chest tightness and chest pain. Digital gastrointestinal radiography revealed a circular shadow in the gastric cardia. Computed tomography (CT) revealed a heterogeneous tumor with uneven enhancement. Enlarged lymph nodes were noted in the lesser curvature of the stomach. On magnetic resonance imaging (MRI), T1- and T2-weighted imaging revealed hyperintensity in and hypointensity in the tumor, respectively, both of which increased substantially after uneven enhancement. Near total gastrectomy was performed, and the tumor was pathologically confirmed to be a gastric melanoma. Because no other possible primary site of malignant melanoma was suspected, a clinical diagnosis of PGM was made. The patient was followed for nearly 5 years, during which she received CT reexamination, but no recurrence or metastasis was observed.

Certain imaging characteristics could be revealed in PGM. Imaging examination can be of great value in preoperative diagnosis, differential diagnosis, and follow-up of patients with PGM.

Core tip: Primary gastric melanoma (PGM) is extremely rare and has rarely been discussed. This report presents a rare case of PGM, along with the relevant digital gastrointestinal radiography, computed tomography, and magnetic resonance imaging findings of PGM, which have been rarely reported thus far. In this case report, the related literature was reviewed so as to explore the imaging features of PGM.

Melanoma is a malignant tumor that commonly occurs in tissues where melanocytes reside, such as the skin, oropharynx, eyes, meninges, and anal canal, and is rarely found in the esophagus, stomach, or small intestine[1-3]. Most melanomas identified in the stomach are metastatic; primary gastric melanoma (PGM) is extremely rare and has rarely been discussed[4]. PGM may be misdiagnosed as other gastric malignant tumor types because of its nonspecific characteristics[5], so it is not easy to make this diagnosis via clinical or imaging manifestations. This report describes a pathologically confirmed PGM case with long-term clinical observation. Additionally, the characteristics of digital gastrointestinal (GI) radiography, computed tomography (CT), and magnetic resonance imaging (MRI) were analyzed, and relevant studies were reviewed to improve the understanding of PGM and provide diagnostic evidence and reference values for clinical treatment of this malignancy.

A 67-year-old Chinese woman presented to our hospital with recurrent chest tightness and chest pain.

The patient who presented with recurrent chest tightness and chest pain persisting for more than 15 d was admitted to our hospital. The clinical symptoms were characterized as primary distension pain near the xiphoid process without obvious cause. The patient demonstrated no panting, coughing, hemoptysis, hematemesis, or weight loss. The patient could take food normally.

The patient’s past medical history included hyperlipidaemia and coronary heart disease for more than 10 years.

The patient did not have a history of smoking or consuming alcohol, and the patient's family medical history was negative.

Physical examination revealed normal cognition and reflexes, and the patient was cooperative in the examination. No abnormal pigmentation of the skin or sclerae, enlarged superficial lymph nodes, or head deformities were observed. The patient’s heart and lungs were normal; the liver and spleen were not palpable.

A laboratory examination indicated that the levels of the tumor markers CA19-9, CA-153, CA-125, carcinoembryonic antigen, and alpha-fetoprotein were in the normal range. Blood tests for liver and kidney function and electrolyte levels, sternum compression test, and liver, gallbladder, and spleen ultrasound all demonstrated normal results.

The patient underwent digital GI radiography, CT, and MRI examinations during hospitalization. Digital GI radiography indicated a 3.8 cm × 3.8 cm circular shadow in the gastric cardia and fundus (Figure 1). A thickened rigid gastric wall with no peristalsis was detected. Thus, radiography data suggested that the tumor was a malignant gastric tumor. CT revealed an iso-or slight low-density tumor in plain scanning (Figure 2A). The tumor had heterogeneous enhancement in the arterial phase (Figure 2B) but persistent enhancement in the portal venous phase (Figure 2C). Enlarged lymph nodes in the lesser curvature of the stomach were detected. MRI revealed a 4.0 cm × 4.0 cm mass in the gastric cardia. The mass exhibited heterogeneous hyperintensity on T1-weighted imaging (T1WI) (Figure 3A) and hypointensity on T2-weighted imaging (T2WI) (Figure 3B), and the lesions displayed hyperintense signal on diffusion-weighted imaging (DWI) when a b-value of 800 s/mm2 was used. There was slightly uneven enhancement during the arterial phase and continuous enhancement on delayed scans (Figure 3D). Based on these results, the presence of melanin was suspected. Therefore, the tumor was suspected to be melanoma. Endoscopic images demonstrated growth of hyperpigmented lesions affecting the cardia and gastric mucosa, causing swelling and congestion. Endoscopic gastric biopsy confirmed the presence of melanoma in the gastric cardia. 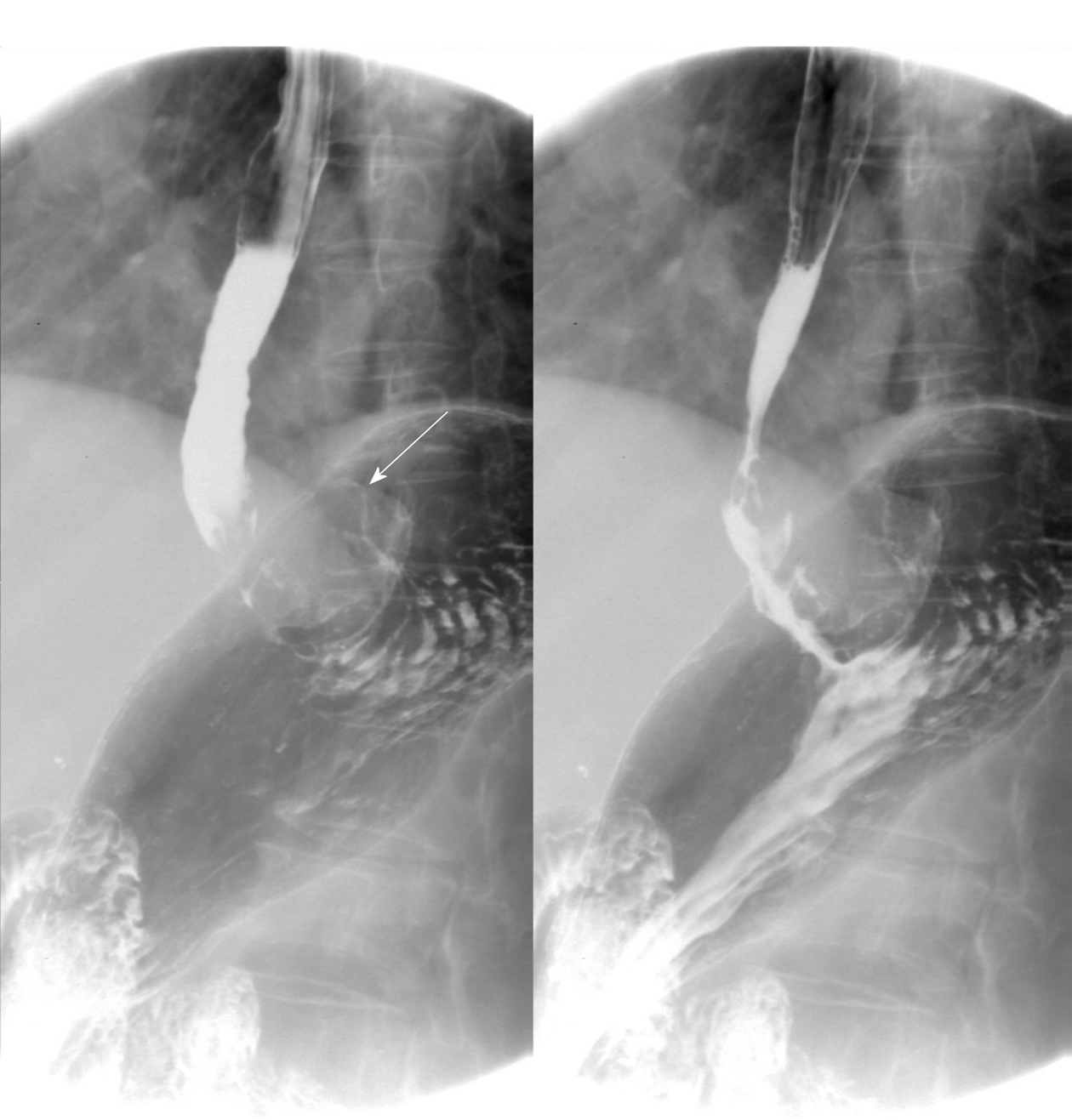 Figure 1 Digital gastrointestinal radiography showed that the tumor was located in the gastric cardia. Thickening and rigidity of the gastric wall with no peristalsis were detected. 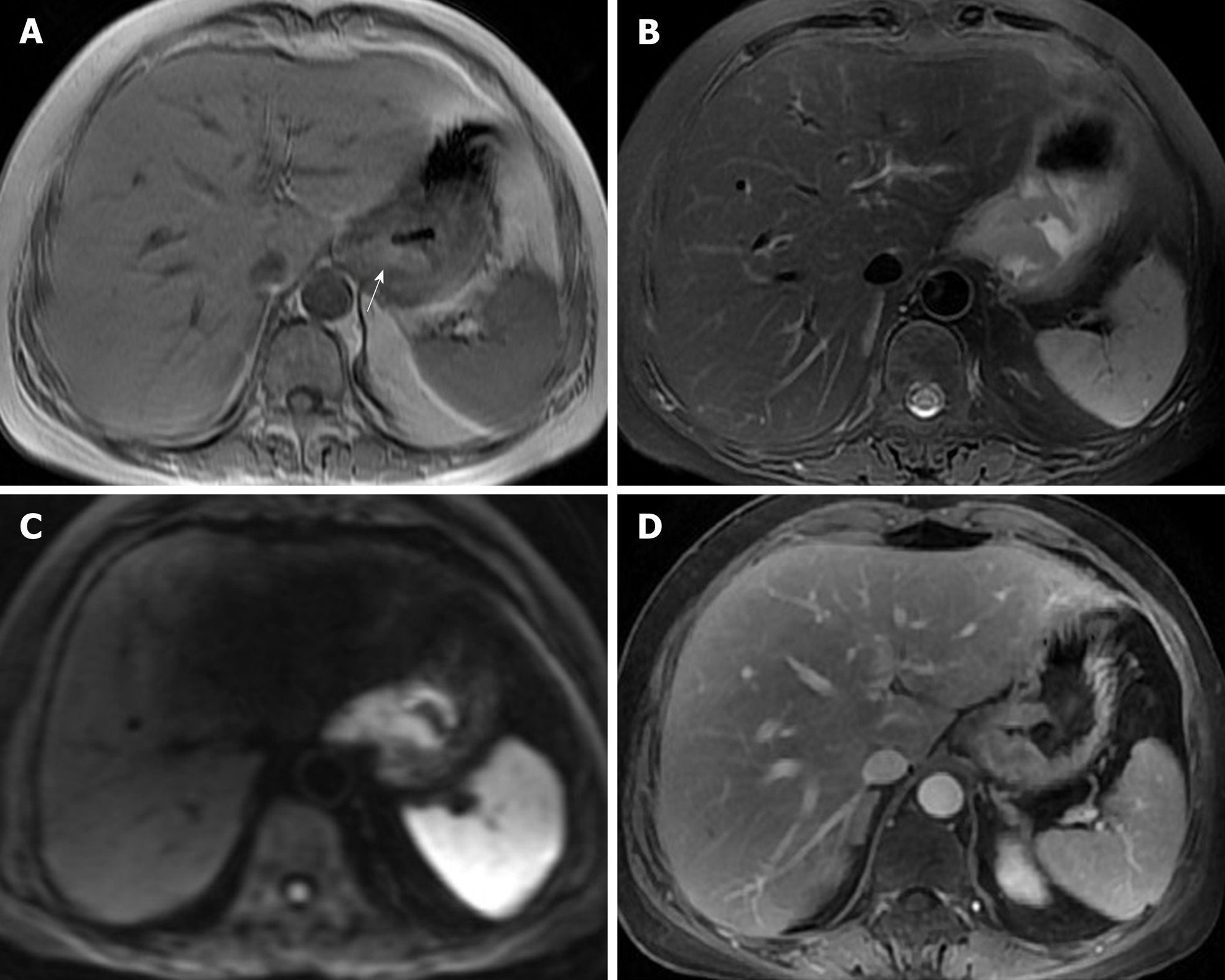 Gross examination of the surgically resected specimens revealed a 4.0 cm × 4.0 cm dark pigmented neoplasm in the gastric cardia. The tumor was raised and ulcerative. Moreover, metastatic black lymph nodes were noted in the lesser curvature of the stomach. Based on the immunohistochemical detection using monoclonal antibodies against oncoproteins, the tumor was HMB45+, S-100+, CK(P)−, MITF+, A103+, and VM+ (Figure 4B and D). 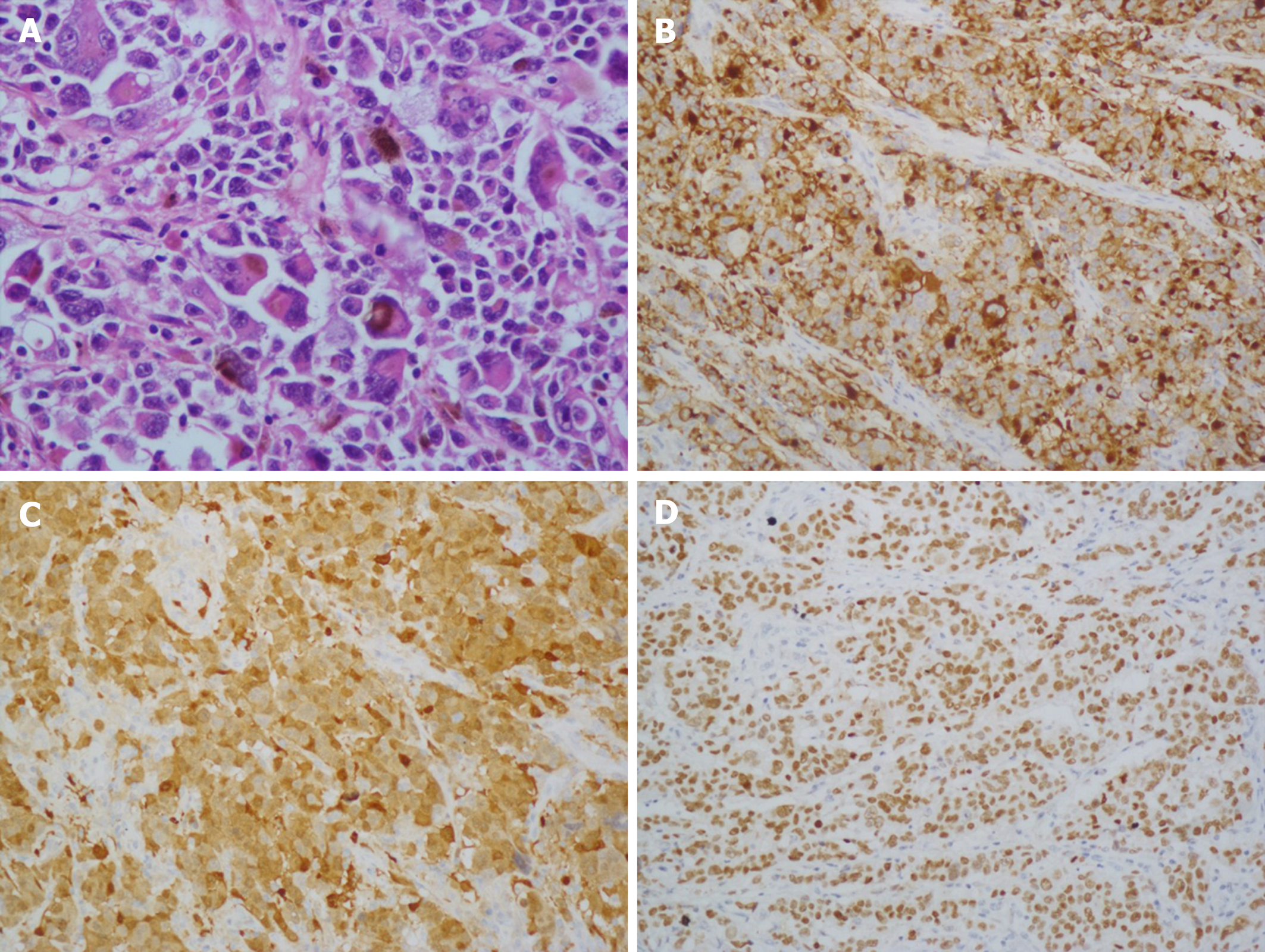 Examinations of the skin, eyes, genital tract, paranasal sinus, anus, vulva, and other regions provided normal results, and no suspected malignant melanoma at any other primary site was detected. Therefore, a clinical diagnosis of PGM was made.

The patient was followed at 20 and 36 mo after the operation in the outpatient department. The patient was doing well physically, with no abnormal findings on physical examination. The patient underwent CT reexamination; whole-body CT revealed no recurrence or metastasis after near total gastrectomy (Figure 5). In August 2019 (at 58-mo follow-up), the patient underwent another CT at a different hospital, the result of which also demonstrated no recurrence or metastasis. 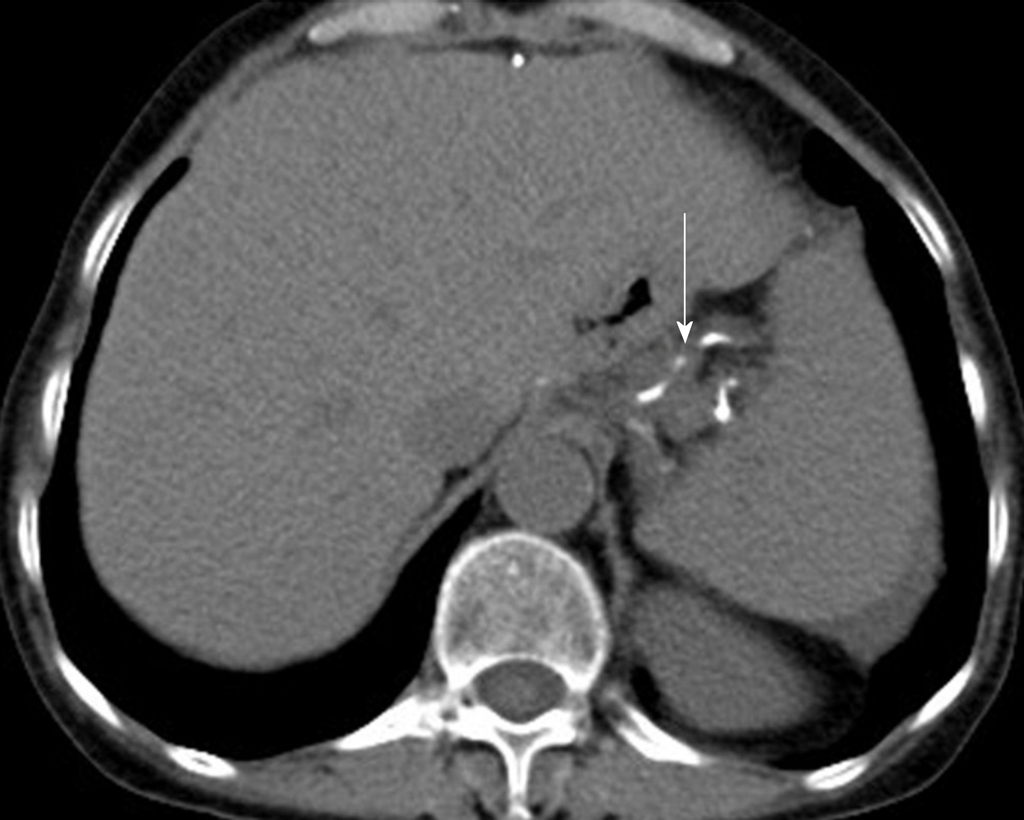 Most melanomas identified in the stomach result from a metastatic disease. PGM is extremely rare, with few cases being described thus far. For the diagnosis of a primary malignant melanoma in the GI tract, the following criteria must be fulfilled[6]: (1) Exclusion of any primary sites of melanoma; (2) No unexplained skin tumors or any other extraintestinal metastases of melaonoma; and (3) Absence of any other intestinal mucosal lesions. Gastric melanoma is a rare malignant tumor of the digestive system with a poor overall prognosis and 5-year survival rate of 25%[7]. Late diagnosis and aggressive behavior of mucosal malignant melanoma may contribute to this poor prognosis. Additionally, malignant GI melanoma has predilection of dissemination in early time due to abundant vascular and lymphatic supply of the GI tract[8,9]. The median survival time of primary malignant GI melanoma was 17 mo after operation, whereas that of PGM was only 5 mo[10,11]. Our patient has been followed for nearly 5 years thus far.

Metastatic gastric melanoma are more common than primary ones; PGM are rare in clinic, and the related literature is also relatively scarce[2-5]. Imaging examination is of great value in melanoma diagnosis and reexamination. To date, only three cases have applied CT or MRI examination (Table 1). Bolzacchini et al[2] reported a case in which CT and MRI revealed a thickened stomach wall in the lesser curvature of the stomach, and metastasis to the liver and regional lymph nodes. Wang et al[11] reported a case of primary advanced esophagogastric melanoma. Digital GI radiography showed a large tumor blocking the esophago-gastric junction. CT revealed a soft mass in the esophagogastric junction with lymph node metastasis in the lesser curvature of the stomach. Yılmaz et al[12] reported a PGM case with a synchronous gastric GI stromal tumor, for which CT showed a large, heterogeneous, cystic solid tumor originating from the posterior wall of the stomach. However, digital GI radiography, CT, and MRI results were not reported in the aforementioned cases. Thus, this is the first PGM case report presenting digital GI radiography, CT, and MRI results, along with follow-up records of up to 5 years.

Digital GI radiography revealed that the tumor was located in the gastric cardia, and demonstrated a thickened and rigid gastric wall with an inability to perform peristalsis. These features meet the diagnostic criteria for malignant tumors. CT is an effective method for demonstrating abdominal hollow viscera. In the present case, muscular invasion was observed on CT. The tumor grew with abundant blood supply and demonstrated considerable enhancement in contrast imaging. MRI with a high soft tissue resolution and large field can display gastric tumors and their surrounding structures, observable from all directions. Multiphase dynamic contrast-enhanced MRI can be used to comprehensively evaluate tumor enhancement patterns and characteristics.

Melanoma produces a paramagnetic substance called melanin; melanin-containing melanoma is indicated by hyperintensity on T1WI and hypointensity on T2WI in MRI[1], which is consistent with the patient’s results in the present report. PGM is a malignant tumor with abundant blood supply. On DWI, the tumor demonstrated a considerably high signal intensity. In enhanced images, the lesions were notably enhanced. The patient was followed for nearly 5 years, during which she underwent CT reexamination, which revealed no recurrence or metastasis.

Thus, digital GI radiography can clearly reveal the shape, location, and size of upper GI tumors. It also can used to dynamically observe gastric wall peristalsis and digestive tract obstruction. Because CT is an effective method for visualizing abdominal hollow viscera, its use in the evaluation of tumor vascularity and invasion-adjacent structures is valuable. CT can be used to evaluate the feasibility of excision of gastric tumors and is a useful and crucial method of monitoring recurrences or metastases during follow-up of patients with PGM. MRI signal intensity can be used to evaluate melanin-containing gastric melanoma. Moreover, MRI can provide additional details that can aid in determining whether a tumor is malignant or benign. Thus, MRI has become the gold standard method for the preoperative diagnosis of melanoma.

This report presents a rare case of PGM, along with the relevant digital GI radiography, CT, and MRI findings of PGM, which have been rarely reported thus far. In this case report, the related literature was reviewed so as to explore the imaging features of PGM. This report can be of great value in preoperative diagnosis, differential diagnosis, and follow-up of patients with PGM.