The liver, which is a metabolic organ, plays a pivotal role in tolerance induction. Hepatic stellate cells (HpSCs), which are unique non-parenchymal cells, exert potent immunoregulatory activity during cotransplantation with allogeneic islets effectively protecting the islet allografts from rejection. Multiple mechanisms participate in the immune tolerance induced by HpSCs, including the marked expansion of myeloid-derived suppressor cells (MDSCs), attenuation of effector T cell functions and augmentation of regulatory T cells. HpSC conditioned MDSC-based immunotherapy has been conducted in mice with autoimmune disease and the results show that this technique may be promising. This article demonstrates how HpSCs orchestrate both innate immunity and adaptive immunity to build a negative network that leads to immune tolerance.

Core tip: The liver is an immune privileged organ that contains cells exhibiting powerful immune regulatory activity. Hepatic stellate cells (HpSCs) possess weak antigen-presenting ability and function as immunological bystander cells in the regulation of the immune response by the way of induction of effector T cell apoptosis and the generation of myeloid-derived suppressor cells and regulatory T cells. The combination of these mechanisms indicates that HpSCs are a potent immunoregulatory entity capable of modulating immune responses in the liver. HpSCs can orchestrate both innate immunity and adaptive immunity to build a negative immune network that leads to immune tolerance. Further understanding of hepatic immune tolerance will provide the basis for developing new immunotherapies that target transplant rejection, chronic viral infection and cancer.

HpSCs are located in the subendothelial space adjacent to the basolateral surface of hepatocytes and make up approximately 15% of the total cell population within the liver. They express very low amounts of major histocompatibility complex (MHC) and co-stimulatory molecules[6]; moreover, HpSCs exhibit low antigen uptake and insufficient processing ability[7,8]. HpSCs are the major site of vitamin A storage within the body[9,10] and have been extensively studied regarding their role in fibrogenesis and induction of cirrhosis. Once activated by an insult, HpSCs become myofibroblasts and deposit extracellular matrix, leading to liver fibrosis[11]. HpSCs are difficult to identify based on surface markers, even though intracellular desmin and α-smooth muscle actin (αSMA) have been used for the identification of quiescent and activated HpSCs, respectively. Nevertheless, a recent publication showed that HpSCs can be differentiated from other liver cells using their size, granularity, and high UV-fluorescence (due to their vitamin A content) in combination with the absence of scavenger activity[12]. This overview will discuss the relationship between HpSCs and immune cells and their participation in hepatic tolerance.

Myeloid-derived suppressor cells (MDSCs) represent an intrinsic part of the myeloid-cell lineage and are a heterogeneous population that is comprised of myeloid-cell progenitors and precursors of myeloid cells. In healthy individuals, immature myeloid cells (IMCs) generated in bone marrow quickly differentiate into mature granulocytes, macrophages or dendritic cells (DCs). In pathological conditions, such as cancer, various infectious diseases, sepsis, trauma, transplantation or some autoimmune disorders, a partial block in the differentiation of IMCs into mature myeloid cells results in an expansion of MDSCs[13]. In mice, MDSCs express both the myeloid lineage differentiation antigen Gr-1 (Ly6G and Ly6C) and the M integrin CD11b. The equivalent of the MDSC in humans is defined as the CD14-CD11b+ CD33+CD15+ phenotype or cells that express the CD33 marker but lack the expression of markers of mature myeloid and lymphoid cells and the MHC class II molecule HLA-DR[14-16]. However, MDSCs share many unifying features, including high expression levels of the immunosuppressive molecules arginase 1 and inducible nitric oxide synthase (iNOS) and, more importantly, their immunosuppressive function[17].

Cotransplantation of HpSCs with allogeneic islets effectively protects the islet allografts from rejection without the requirement of immunosuppression via inhibition of the CD8+ T-cell response, enhancement of regulatory T-cells[18,19] (Figure 1), and induction of MDSCs[20]. The role of MDSCs is vital to induction of immune tolerance, and this process occurs by skewing the differentiation and effector function of T cells. 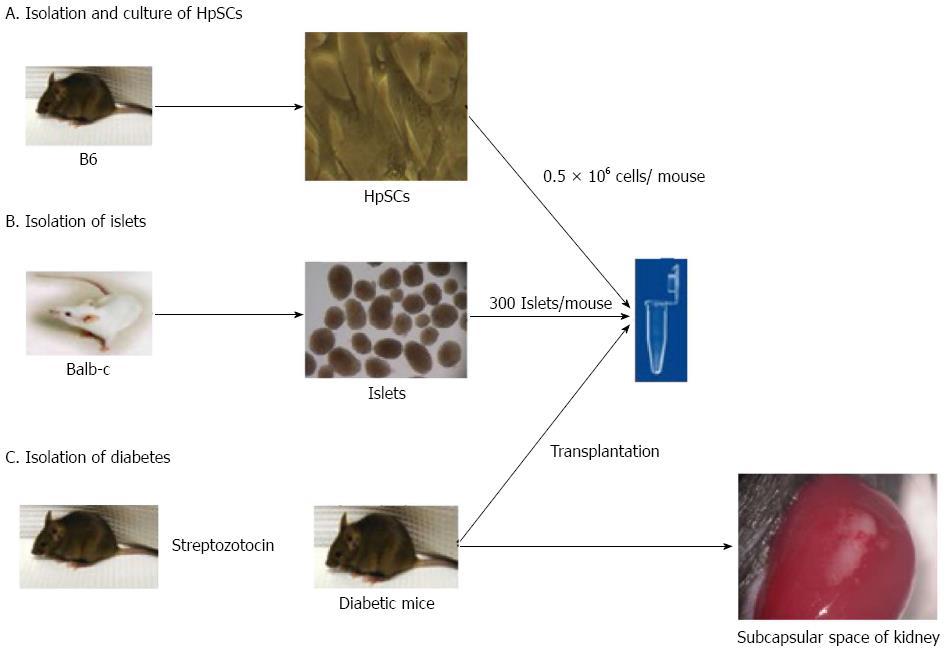 Figure 1 Hepatic stellate cells cotransplanted allogeneic islet animal model. Diabetes was induced in recipients with a single intraperitoneal injection of streptozotocin (220 mg/kg body weight). Only mice with nonfasting blood glucose levels exceeding 350 mg/dL were used as recipients. Islets were isolated from donor pancreas by collagenase V. After separation on a Ficoll gradient, the islets were purified by hand picking. Three hundred freshly isolated islets alone or mixed with 1 or 3 × 105 hepatic stellate cells (HpSCs) were aspirated into polyethylene tubing, pelleted by centrifugation for 2 min, and then gently placed under the subcapsular space of the recipient kidney. Transplantation was considered successful if the nonfasting blood glucose returned to and remained normal (< 150 mg/dL) for the first 4 d after transplantation. The tail vein nonfasting blood glucose level was monitored after transplantation, and the first day of 2 consecutive readings of blood glucose levels greater than 350 mg/dL was defined as the date of diabetes onset. No immunosuppressive reagents were administered throughout the experiments.

Chou et al[20] demonstrated that HpSCs promoted the generation of MDSCs both in vitro and in vivo. Induction of MDSCs is dependent on an intact interferon gamma (IFN-γ) signaling pathway in HpSCs and is mediated by soluble factors, suggesting that the specific tissue stromal cells play a crucial role in regulating immune responses via inflammation-induced generation of MDSCs. One of the effective soluble factors secreted by HpSCs is complement component 3 (C3). C3 deficient HpSCs lose their ability to induce MDSCs and, consequently, fail to protect the cotransplanted islet allografts. HpSCs produce complement activation factor B and factor D, which then enhances C3 cleavage into the activation products iC3b and C3d. Addition of exogenous iC3b leads to differentiation of MDSCs with potent immune-inhibitory function[21]. HpSCs are a major source of the immunoregulatory metabolite all-trans retinoic acid (ATRA) in the liver, which may contribute to the generation of tolerogenic DCs in that location. ATRA has been shown to enhance both Arginine 1 and iNOS expression in DCs, resulting in a tolerogenic phenotype[22]. MDSCs induced by HpSCs express B7-H1 and secrete iNOS, which leads to the protection of islet allografts from rejection when MDSCs are cotransplanted with allogeneic islets. This process is associated with attenuation of CD8 T cells in grafts and marked expansion of regulatory T (Treg) cells, which contribute to MDSC-induced T cell hyporesponsiveness[23,24]. These findings provide novel mechanistic insights into influence of local tissue cells on the differentiation of myeloid cells and may assist in the development of MDSC-based therapy in clinical settings.

Li et al[25] showed that adoptive transfer of HpSC-induced MDSCs successfully reversed disease progression in experimental autoimmune myasthenia gravis (EAMG), a T cell-dependent and B cell-mediated model for myasthenia gravis. In addition to ameliorating the disease severity, MDSC-treated EAMG mice showed suppressed acetylcholine receptor (AChR)-specific T cell responses, decreased levels of serum anti-AChR IgGs, and reduced complement activation at the neuromuscular junctions. MDSCs directly inhibited B cells through multiple mechanisms, including PGE2, inducible NO synthase, and arginase. These results demonstrated that HpSCs induce MDSCs concurrently suppress both T and B cell autoimmunity, leading to effective treatment of established EAMG. Another MDSC-based immunotherapy was performed in hemophilia A mice (factor VIII deficiency)[26]. An adverse effect of factor VIII infusion therapies used for the treatment of hemophilia A is the production of antibodies (inhibitors) against factor VIII, which is a T cell-dependent and B cell-mediated process. HpSC mediated MDSCs, propagated from hemophilia A mice, can also inhibit the proliferation and activation of B cells stimulated by IgM and interleukin-4 (IL-4). Administration of MDSCs, mediated by HpSCs, induced CD4+ T cell and B220+ B cell hyporesponsiveness to factor VIII and reduced inhibitor formation in hemophilia A mice.

Taken together, HpSC-based cell therapy has been successfully conducted based on the above studies, and the results increase the therapeutic potential of this technique.

HpSCs have been reported to be non-professional antigen-presenting cells (APCs) that do not constitutively express the MHC class II proteins required for interaction with naive T cells; these are expressed only upon stimulation by certain cytokines such as IFN-γ.

The relationship between HpSCs and B cells is not fully understood. Brandão et al[35] conducted a study to verify the relationship between plasma cells and HpSCs in human autoimmune hepatitis. They found a significant correlation between HpSCs, the score of fibrosis and the number of plasma cells. Additionally, they found a co-localization of plasma cells and HpSCs. Patients who had successfully been treated were found to have a reduced number of both cells. The result suggests a direct interaction between the HpSCs and plasma cells, but the exact mechanism is still unknown.

It is not surprising that the liver, as an immune privileged organ, contains cells that exhibit powerful immune regulatory activity[36]. Due to its anatomical location and function, the liver is continuously exposed to various antigens, including dietary and commensal antigens. In the long journey of evolution, the liver has acquired the ability to control inappropriate immune responses to those harmless antigens. HpSCs possess weak antigen-presenting ability and function as immunological bystander cells in regulating immune responses via the induction of effector T cell apoptosis and generation of MDSCs and Treg cells[5,18-20]. The combination of these mechanisms indicates that HpSCs are a potent immunoregulatory entity capable of modulating immune responses in the liver (Figure 2). 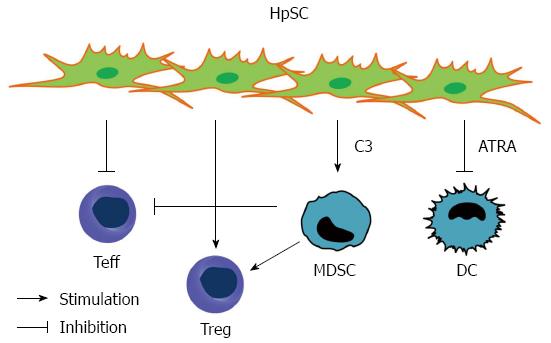 Liver sinusoidal endothelial cells (LSECs) are another abundant NPC population in the liver and line the hepatic sinusoids. LSECs represent the unique characteristics of APCs and have an increased scavenger ability that is different from HpSCs. LSECs can also restrain inflammation by induction of Treg cells[37], as evidenced by in vivo studies in a mouse model of multiple sclerosis and experimental autoimmune encephalomyelitis[38]. LSECs are capable of cross-presenting circulating tumor antigens, thereby inducing non-responsive antigen-specific CD8+ T cells through the PD-1/PD-L1 pathway[39]. LSECs can also negatively regulate the APC function of neighboring DCs, which lose their ability to prime naïve T cells by downregulating DC costimulatory signals[8]. However, HpSCs are potentially more beneficial for conducting immunotherapy than LSECs because HpSCs can produce large amounts of MDSCs that are broadly distributed to primary and secondary lymphoid organs to exert their immune-modulatory ability and induce immune tolerance.

Organ transplantation has been widely applied for decades, but cellular transplants, including islets and hepatocytes, remain largely experimental because the side effects of immunosuppression often outweigh the benefits. Therefore, it is crucial to develop a protocol to reduce or avoid immunosuppression. The recent studies related to allogeneic islets cotransplanted with HpSCs or MDSCs mediated by HpSCs show that these cells achieve long-term survival without immunosuppressive medications in mice and offer a promising future for clinical application.

In summary, activated HpSCs can orchestrate both innate immunity and adaptive immunity to build a negative immune network that leads to immune tolerance. Further understanding of hepatic immune tolerance will provide the basis for developing new immunotherapies that target transplant rejection, chronic viral infection and cancer.