With respect to gastric cancer treatment, improvements in endoscopic techniques and novel therapeutic modalities [such as endoscopic mucosal resection (EMR) and endoscopic submucosal dissection (ESD)] have been developed. Currently, EMR/ESD procedures are widely accepted treatment modalities for early gastric cancer (EGC). These procedures are most widely accepted in Asia, including in Korea and Japan. In the present era of endoscopic resection, accurate prediction of lymph node (LN) metastasis is a critical component of selecting suitable patients for EMR/ESD. Generally, indications for EMR/ESD are based on large Japanese datasets, which indicate that there is almost no risk of LN metastasis in the subgroup of EGC cases. However, there is some controversy among investigators regarding the validity of these criteria. Further, there are currently no accurate methods to predict LN metastasis in gastric cancer (for example, radiologic methods or methods based on molecular biomarkers). We recommend the use of a 2-step method for the management of early gastric cancer using endoscopic resection. The first step is the selection of suitable patients for endoscopic resection, based on endoscopic and histopathologic findings. After endoscopic resection, additional surgical intervention could be determined on the basis of a comprehensive review of the endoscopic mucosal resection/endoscopic submucosal dissection specimen, including lymphovascular tumor emboli, tumor size, histologic type, and depth of invasion. However, evaluation of clinical application data is essential for validating this recommendation. Moreover, gastroenterologists, surgeons, and pathologists should closely collaborate and communicate during these decision-making processes.

Core tip: In this review, we defined the clinicopathologic parameters for predicting lymph node metastatic early gastric cancer. Moreover, we recommended the use of a 2-step method for minimally invasive management of early gastric cancer. Collection and assessment of clinical application data will help validate this recommendation.

Gastric cancer is the second most common cause of cancer death, and the fourth most prevalent cancer worldwide (7.8%)[1]. Early gastric carcinoma (EGC) has been defined as gastric adenocarcinoma confined to either the mucosa or submucosa, irrespective of regional lymph node metastasis, whereas advanced gastric cancer has been defined as adenocarcinoma that has invaded into the muscularis propria or beyond[2]. The incidence of EGC differs between Eastern and Western nations. In South Korea, the proportion of gastric cancers diagnosed at an early stage increased from 28.6% in 1995 to 32.8% in 1999. In Japan, the proportion of gastric cancers diagnosed at an early stage has increased from 18% to 57% over the past 20 years[3,4]. These changes are mostly attributable to advances in diagnostic technologies, including radiologic and endoscopic modalities, which allow earlier detection of gastric cancer, as well as nationwide mass screening programs for gastric cancer[5,6].

With respect to therapeutic strategies for EGC, radical surgery with complete removal of the first and second tier lymph nodes can achieve 5-year survival rates in excess of 90%, and recurrence rates lower than 2%-3%[7,8]. Recently, endoscopic resection methods [such as endoscopic mucosal resection (EMR) and endoscopic submucosal dissection (ESD)] have become widely accepted as first-line therapies for EGC without lymph node (LN) metastasis. This acceptance partly results from the risks of gastrectomy and its negative effects on the patient’s quality of life[5,6]. Widely accepted selection criteria for EMR are the presence of an intramucosal and intestinal (differentiated) adenocarcinoma with a diameter of ≤ 2 cm, and the absence of lymphovascular invasion. With the development of ESD, broader indications have been established, including submucosal invasion to a maximal depth of 500 μm, and sizes up to 3 cm in diameter. These broader indications are a consequence of the wider resection of the mucosa and submucosa. For both EMR and ESD, the aforementioned indications are based on large Japanese datasets, which suggest a minimal risk of lymph node metastasis for lesions that fall within those criteria. Therefore, we believe that it is appropriate to review lymph node metastasis in EGC. Our review particularly focuses on methods of predicting lymph node metastasis in EGC.

LYMPH NODE METASTASIS OF EGC AND THE INDICATIONS OF EMR/ESD

CLINICOPATHOLOGICAL FEATURES FOR PREDICTING LYMPH NODE METASTASIS IN EGC, AND A RECOMMENDATION FOR A SCORING SYSTEM

In consideration of these limitations, the management of patients who might undergo EMR/ESD could be performed using 2 processes, which have been described previously[18] (Figure 1). First, the selection of EGC patients for EMR/ESD could be performed on the basis of radiologic findings (endoscopic ultrasonography-based depth of invasion), endoscopic findings (size), and biopsy specimen findings (histopathological features). Second, endoscopic resection could be performed along with a comprehensive review of the EMR/ESD specimen, including examination for lymphovascular tumor emboli, tumor size, histologic type, and depth of invasion. The selection for further surgical resection after EMR/ESD could be determined from the results of this comprehensive review of the EMR/ESD specimen. Therefore, careful identification of the various histopathologic features of the EMR/ESD specimen is a mandatory component of the management of EMR/ESD patients. Various scoring systems have been developed for these purposes. 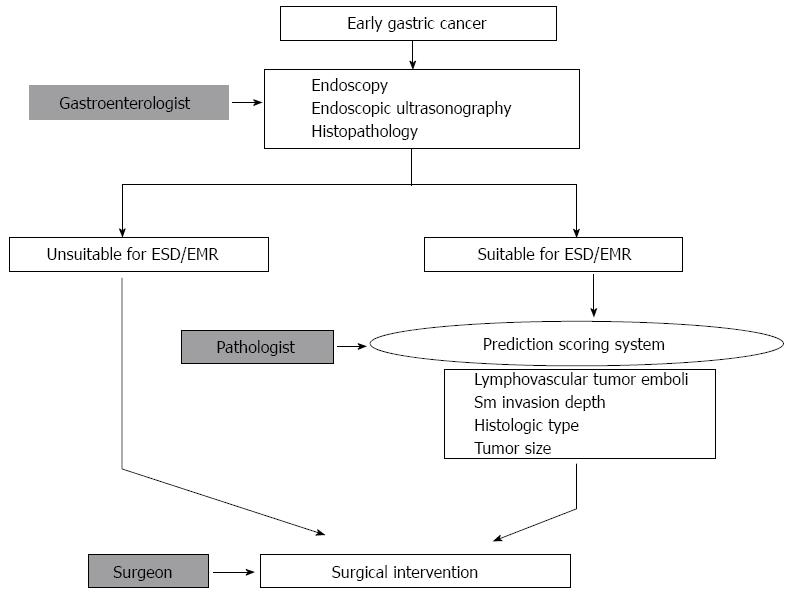 Figure 1 Workflow for deciding on a therapeutic method for cases of early gastric cancer. The first step is the selection of suitable patients for endoscopic resection, based on endoscopic and histopathologic findings. After endoscopic resection, additional surgical intervention could be determined on the basis of a comprehensive review of the EMR/ESD specimen, including lymphovascular tumor emboli, tumor size, histologic type, and depth of invasion. ESD: Endoscopic submucosal dissection; EMR: Endoscopic mucosal resection; Sm: Submucosal.

Fujii et al[19] have demonstrated that lymphatic invasion, lymphocytic infiltration, poorly differentiated submucosal component, tumor size, depth of invasion, ulceration, and venous invasion are indications for surgical resection after ESD. They scored lymphatic invasion (+2), lymphocytic infiltration (-2), poorly differentiated component in the submucosa (+2), smallest diameter > 2 cm (+1), submucosal invasion depth > 2000 μm (+1), and venous invasion (+1) for each ESD specimen. The authors recommended that, after scoring each component, further surgical resection should be recommended if the sum of the scores is ≥ 4. They reported that their scoring system had 100% sensitivity, 68.0% specificity, and 73.7% diagnostic accuracy for predicting LN status in submucosal invasive EGC.

Kim et al[17] have developed the nodal prediction index formula, which is based on risk factors for LN metastasis in submucosal invasive EGCs. Their formula is NPI = (2.128 × lymphovascular tumor emboli) + (1.083 × submucosal invasion width ≥ 0.75 cm) + (0.507 × submucosal invasion depth ≥ 1000 μm + (0.515 × infiltrative growth pattern). Here, lymphovascular tumor emboli, submucosal invasion ≥ 1000 μm, submucosal width ≥ 0.75 cm, and infiltrative growth enter into the formula as either 0 (absent) or 1 (present). The nodal prediction index produces a greater area under the receiver operating characteristic (ROC) curve (0.809) than do individual evaluations of lymphovascular tumor emboli (0.744) or submucosal invasion width (0.689)[17]. Kim et al[17] reported that choosing a score of 1.8515 as the cutoff between the LN(+) and LN(-) groups yielded the ROC curve of optimal sensitivity and specificity. Particularly, using a 1.8515 cutoff score for predicting nodal metastasis resulted in a sensitivity, specificity, positive predictive value, negative predictive value, and accuracy of 70.4%, 80.1%, 41.3%, 93.5% and 79.3%, respectively. Although the exact results have varied across the different investigations, the use of a scoring system contributes an element of objectivity when deciding whether surgery is indicated after ESD.

At present, no imaging modalities are capable of reliably predicting LN status in cases of gastric cancer, especially those that involve EGC[9,27]. Imaging modalities that have been investigated include abdominal ultrasonography, endoscopic ultrasonography, computed tomography, magnetic resonance imaging, and positron emission tomography-computed tomography. Endoscopic ultrasonography and some biologic markers have been introduced as possible methods of predicting LN status in cases of gastric cancer, but the true reliabilities of these methods remain controversial. Endoscopic ultrasonography can be used as a screening method to select patients who are suitable for EMR/ESD, according to the measurement of depth of submucosal invasion[28]. Recently, laparoscopic sentinel node biopsy with endoscopic resection has been investigated as a promising method of predicting LN metastasis in EGC; although many clinical attempts regarding the use of sentinel nodes have been performed, this approach still has technical and clinical limitations[29,30].

We recommend 2 steps for the management of EGC using endoscopic resection. The first step is the selection of suitable patients for endoscopic resection, based on endoscopic and histopathologic findings. After endoscopic resection, additional surgical intervention could be determined on the basis of a comprehensive review of the EMR/ESD specimen, including lymphovascular tumor emboli, tumor size, histologic type, and depth of invasion. Gastroenterologists, surgeons, and pathologists should communicate closely during these decision-making processes.