An 18-year-old male patient was admitted to our hospital with complaints of a 3-year history of intermittent epigastric pain with vomiting and a 1-year history of peripheral edema and anorexia. Physical examination revealed pale face, edema of eyelids and legs, and epigastric pain when pressed. Laboratory tests indicated that his hemoglobin (Hb) was 95 g/L, total serum protein was 30 g/L, and albumin:globulin ratio was 0.8:2.2. Radiologic study showed disordered and thickened gastric folds and slow wriggling movement of the gastric wall. Nodular defects were observed from 0.8-3.0 cm and appeared well circumscribed. Clinical diagnoses included carcinoma of stomach, secondary anemia, an hypoproteinemia. After surgical treatment of subtotal gastrectomy, the patient recovered quickly and the level of serum albumin decreased after 2 wk.

The specimen was characterized by enlarged gastric mucosal folds, involving both length and width, which produced the observed thickened and convoluted radiologic appearance of the mucosal membrane and which was reminiscent of the appearance of cerebral convolution. The width of the folds ranged from 1.5 cm to 2.5 cm with deep grooves in between and non-uniform in pattern. It was noted that the enlarged gastric region showed sharply defined margins. The mucosal folds were not present in the pars pylorica. The nodules located in the body of the stomach corresponded to the diffuse form of the varioliform gastritis condition (Figure 1). Evaluation of cross-sections showed that the thickness of the mucosal membrane was 0.7 cm. The histologic changes essentially involved the mucosal folds of the body of the stomach. Most epithelial surfaces were covered with mucus. The gastric pits showed marked elongation and tortuosity, increased number and depth, and with some dilation. The foveolar mucosa of the epithelium generally consisted of active mucus-secreting cells, and the upper part of the mucosal membrane had been replaced by these cells. The mucosal lamina propria contained moderately excessive lymphocytes, plasma cells, eosinophils and neutrophils, which were localized to the upper half of the mucosa, mimicking chronic superficial gastritis. In addition, numerous intraepithelial lymphocytes were observed on the surface and foveolar epithelium, and were present as single cells rather than in clusters, with most being surrounded by a clear “halo” (Figure 2). Abscesses, involving the pits and crypt cells, were observed (Figure 3). The muscularis mucosa showed irregular hyperplasia and hypertrophy, with bundles of smooth muscle fibers extending up into the lamina propria of the mucosa. The ratio of intraepithelial lymphocyte counts to total lymphocyte counts ranged from 31% to 49%, with an average of 43%. The normal mucosa, atrophic gastritis, and superficial gastritis accounted for 1.6%, 4.4% and 2.9% of the area respectively; for each, the depths of the lamina propria mucosa was 12.7 mm, 0.7 mm and 2.1 mm respectively. Pathologic diagnosis was Menetrier′s disease with lymphocytic gastritis.

Figure 1 Mucosal folds of the body of the stomach with appearance reminiscent of cerebral convolution. 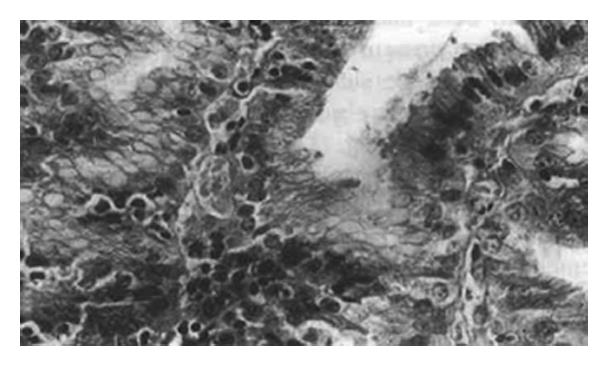 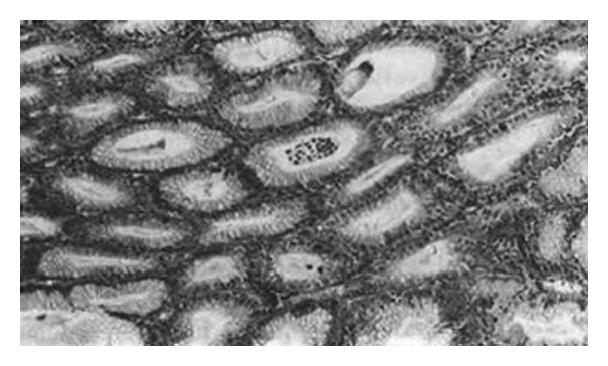 Figure 3 Crypts lined with mucus-secreting cells and containing lymphocytes and neutrophils, with formation of crypt abscesses. HE staining, magnification × 66.
Case 2

A 57-year-old female patient was admitted to our hospital with complaints of a 4-year history of epigastric pain with poor appetite, vomiting and intermittent diarrhea. Physical examination revealed weight loss and epigastric pain on pressure, but no palpable mass. Ascites sign was doubtful, but edema was present in the legs. Laboratory findings indicated that Hb was 110 g/L and total serum protein was 42 g/L. Radiologic study of the upper alimentary tract showed thickened mucosal folds and slow wriggling movements of the stomach. There were some nodular defects, of various sizes. The maximum diameter was 3.5 cm. Clinical diagnosis was multiple polyposis, and the entire stomach was resected.

Pathologic changes were found throughout the entire stomach. Changes were similar to those of case 1, with the exceptions of more thickened mucosal folds (macroscopically) and more foveolar epithelium lining with mucus-secreting cells (microscopically) (Figure 4). Mucosal intraepithelial lymphocytes of the surface and foveolar epithelium accounted for 40.5% and the depth of lamina propria was 13.9 mm. Findings from the pathologic examination indicated a diagnosis of Menetrier′s disease with lymphocytic gastritis. 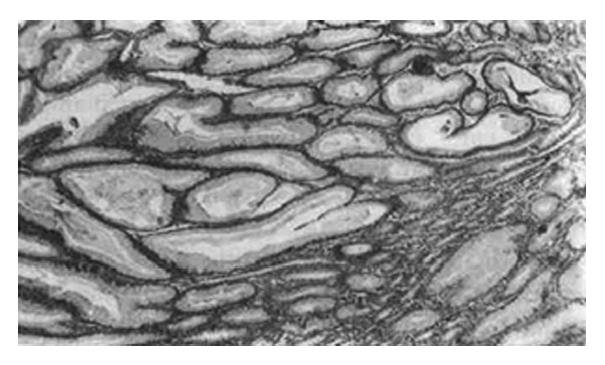 Figure 4 Gland normally containing parietal and chief cells that were replaced by the active mucus-secreting cells. HE staining, magnification × 66.
DISCUSSION

Gastric rugal hypertrophy is a morphologically descriptive name, and can encompass many disease conditions. Fieber et al[1] reported that a variety of names used for this condition, including at least 37 synonyms, such as Menetrier′s disease (MD), Zollinger-Ellison syndrome, hypertrophic hypersecretory gastropathy, diffusely infiltrative adenocarcinoma, malignant lymphoma, and certain forms of gastric polyposis (e.g. Cronkhite—Canada syndrome). The cases reported above were diagnosed as Menetrier′s disease with lymphocytic gastritis.

Macroscopically, Menetrier′s disease may be categorized as one of three types: 1. localized, essentially involving the body of the stomach; 2. diffuse, involvement of the whole stomach; 3. associated with other gastropathy, such as gastric adenocarcinoma, multiple ulcers, varioliform gastritis, etc. Microscopically, the foveolar epithelium shows marked hyperplasia and metaplasia; the glands containing the parietal and chief cells are replaced by mucus-secreting cells. Finally, chronic inflammatory cell infiltration occurs in the lamina propria. A few of cases in the literature have been reported with associated atypical hyperplasia and carcinomatous changes.

Lymphocytic gastritis (LG) is characterized by the presence of numerous intraepithelial lymphocytes associated with the surface and foveolar epithelium, with some of these cells infiltrating the dilated pits and forming crypt abscesses. In our cases, a variety of inflammatory cells were found to have infiltrated the lamina propria. A case reported by Dixon et al[4] had lymphocytic counts of surface and foveolar epithelium in LG with an average of 57%, and with normal gastric mucosa and chronic atrophic gastritis accounting for 2.5% and 3.4% respectively; immunohistochemical study verified that these lymphocytes were T lymphocytes.

The above cases presented the unusual combination of Menetrier’s disease intermingled with LG. The intraepithelial lymphocytes of the surface and foveolar epithelium were found not only in the stomach body’s mucosal folds affected by Menetrier′s disease but also in the inter-rugal body mucosa as well as in the uninvolved antral mucosa. It remains unclear whether the presence of LG was a purely coincidental event, or if the LG significantly contributed to the pathogenesis or the course of Menetrier′s disease. Therefore, researchers should continue to study the etiology, pathogenesis and natural history of Menetrier′s disease with LG.