Intestinal duplication is an uncommon congenital condition in young adults. A 25-year-old man complained of chronic, intermittent abdominal pain for 3 years following previous appendectomy for the treatment of suspected appendicitis. Abdominal discomfort and pain, suggestive of intestinal obstruction, recurred after operation. A tubular mass was palpable in the right lower quadrant. Computed tomography enterography scan identified suspicious intestinal intussusception, while Tc-99m pertechnetate scintigraphy revealed a cluster of strip-like abnormal radioactivity in the right lower quadrant. On exploratory laparotomy, a tubular-shaped ileal duplication cyst was found arising from the mesenteric margin of the native ileal segment located 15 cm proximal to the ileocecal valve. Ileectomy was performed along with the removal of the duplication disease, and the end-to-end anastomosis was done to restore the gastrointestinal tract continuity. Pathological examination showed ileal duplication with ectopic gastric mucosa. The patient experienced an eventless postoperative recovery and remained asymptomatic within 2 years of postoperative follow-up.

Core tip: We reported a case of duplication of the alimentary tract involving the ileum, which mimicked intestinal intussusception, Meckel’s diverticulum (MD) and Crohn’s disease, in a young man. Computed tomography enterography identified the intussusception in the right lower quadrant, and the disease was positive on Tc-99m pertechnetate scintigraphy. Exploratory laparotomy and surgical pathology showed ileal duplication cyst with complicating ectopic gastric mucosa. Differential diagnosis of ileal duplication cyst was made, especially from MD.

Gastrointestinal tract duplication is a rare congenital gastrointestinal malformation reported in 1733 for the first time, and termed as duplication of the alimentary tract (DAT) by Fiorani et al[1]. The exact etiology of DAT remains unknown, while multiple theories have been postulated, including “abortive twinning theory’’, “persistent embryonic diverticula theory’’, “split notochord theory’’, “intrauterine vascular accident theory’’ and more popular “aberrant luminal recanalization theory’’. More than 80% of DAT cases are diagnosed in children under 2 years but rarely in adults[2,3]. DAT can arise from any segment of the gastrointestinal tract from the mouth to the anus, but involves the ileum in most cases (44%)[4]. Clinical manifestations of DAT are highly variable, especially in adults, depending on the type, size, location, and mucosal lining of the duplication. An intestinal DAT may be asymptomatic, while chief complaints consist mainly of belly pain, abdominal mass, intestinal obstruction, and hematochezia[5]. Ileal duplication occasionally becomes symptomatic until adulthood and requires subsequent medical intervention. However, ileal duplication cannot be overlooked in adult patients due to its serious complications, such as refractory bleeding, gastrointestinal perforation, and possible malignant transformation if with complicating gastric mucosa heterotopia[5]. Ileal duplication is also a diagnostic challenge in adults as it is almost impossible in the clinical setting to differentiate it from other common gastrointestinal malformations or inflammatory diseases, such as Meckel’s diverticulum (MD), noncomplicating intestinal intussusception, and Crohn’s disease[6]. We report a case of ileal duplication mimicking intestinal intussusception in a young man in his mid 20s, which was previously misdiagnosed as appendicitis, Crohn’s disease or MD.

A 25-year-old Han Chinese man complained of chronic abdominal pain and weight loss for 3 years. In previous hospitalization, contrast gastrointestinal radiography showed multiple mucosal filling defects in the terminal segment of the ileum, while abdominal contrast-enhanced computed tomography (CT) scan revealed localized dilation, effusion, thickening, and edema of the intestinal wall in the right lower quadrant with concomitant enlargement of multiple mesenteric lymph nodes. Ileal Crohn’s disease was initially suspected but subsequently excluded due to the fact that colonoscopy only identified mild chronic inflammation. Moreover, the abdominal symptoms could not be alleviated by the medication with oral salicylazo-sulphapyridine but omeprazole. Open appendectomy was performed as indicated by a serious attack of right lower quadrant pain, and postoperative pathology showed mild simple appendicitis. However, intermittent abdominal pain free of hematochezia or melena, suggestive of intestinal obstruction, still recurred following appendectomy. The patient was referred to our department in November 2010 due to the consistently worsening abdominal symptoms in the absence of any clinically evident predisposing factors. 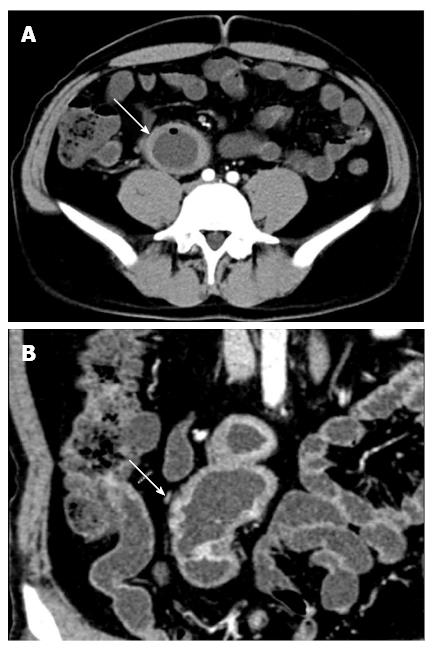 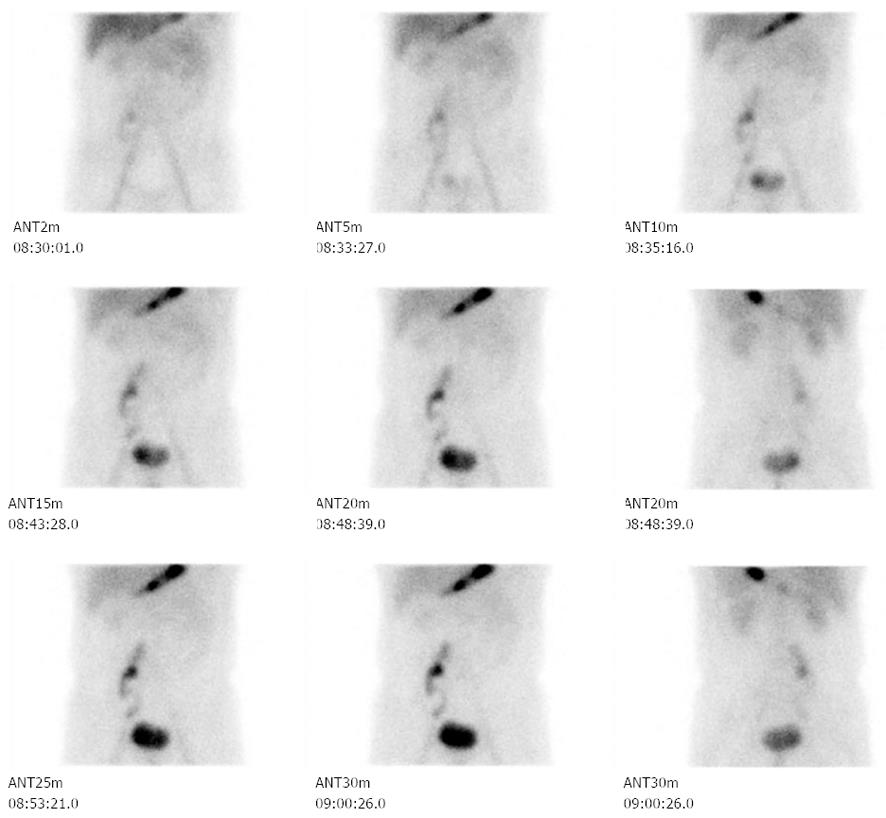 Intraoperative exploration showed no clinically significant abnormalities, except for moderate intestinal adhesions, in the peritoneal cavity. However, a duplicating, tubular-shaped intestinal segment, 15.5 cm in length and 4 cm in diameter (Figure 3A), was found arising from the mesenteric margin of the native ileal segment located 15 cm proximal to the ileocecal valve (Figure 3B). The distal part of the ileal duplication cyst had a 2-cm, completely patent orifice into the native ileal lumen, while the proximal part ended in a blind pouch (Figure 3C). The ileal duplication cyst was easily resected along with a 7.5 cm native ileal segment, and an end-to-end ileal anastomosis was performed to restore the gastrointestinal continuity. The resection specimen showed no signs of inflammation, infection, ulceration, hemorrhage, obstruction or malignant transformation (Figure 4A). Additionally, gross pathology (Figure 4B) and histology (Figure 4C) showed that the duplication cyst was lined with ileal mucus glands and heterotopic gastric mucosae. Therefore, this disease was diagnosed as ileal duplication cyst with complicating gastric mucosa heterotopia. The patient experienced an eventless postoperative recovery, and he was discharged from hospital on postoperative day 7. The patient was followed up at the outpatient clinic and remained asymptomatic throughout a two-year follow-up period until the time of drafting this manuscript.

Figure 3 Exploratory laparotomy findings. A: A 25-cm duplicating, tubular small intestinal segment was found arising from the ileal mesenteric margin; B: This duplication cyst was intimately attached to the native ileal segment located 15 cm proximal to ileocecal valve; C: this cyst had a blind end proximally and a completely patent orifice into the native ileal lumen distally.

Figure 4 Gross and histological pathology of the resection specimen. A: The resection specimen showed no signs of inflammation, infection, ulceration, hemorrhage, obstruction, or malignant transformation; B: The mucosal layer of the duplication cyst was lined with both small intestinal and gastric mucosae; C: Histology revealed that the duplication cyst was lined with ileal mucus glands and heterotopic gastric mucosae (hematoxylin-eosin, × 100).
DISCUSSION

DAT was firstly reported by Fitz[7] and subsequently defined by Ladd et al[8] as a spherical- or tubular-shaped anomaly that was attached or adherent to and shared the identical phenotypic characteristics with the normal alimentary tract. Although DAT is known as a rare congenital malformation (1/10000 live births), this anomaly can occur anywhere along the gastrointestinal tract, with the ileum being the most frequently affected segment[2,6], either on the mesenteric margin or the contralateral side[9,10]. Daudet et al[11] reviewed 764 DAT cases, the majority of which occurred at infancy but rarely at adulthood, with a male dominance.

Ileal duplication normally exhibits highly variable and nonspecific clinical manifestations in adults. The most frequent complaints consist mainly of symptoms suggestive of gastrointestinal bleeding and intestinal obstruction[5,6,12,13]; and abdominal pain and palpable abdominal mass are also reported by approximately 50% of patients[13]. Furthermore, gastrointestinal bleeding and refractory abdominal pain may be underlain with heterotopic gastric mucosae lining the duplication cyst. Therefore, antacids can be effective in relieving abdominal pain as shown in this patient.

Multiple diagnostic tools are reported to be useful in the investigation of DAT, including contrast-enhanced gastrointestinal ultrasonography and radiography, abdominal CT scan, and gastrointestinal endoscopy[14,15]. Moreover, Tc-99m pertechnetate scintigraphy is recommended as the first-line option of choice for the workup of DAT[16]. The positive result depends mainly on the abnormal enrichment of radionuclides accumulated by the heterotopic gastric mucosae. Ileal DAT mainly needs to be differentiated from MD. In pathogenesis, MD is a true congenital diverticulum deriving from the remnant of the omphalomesenteric duct during the development of the terminal ileum, while DAT can occur anywhere along the gastrointestinal tract but most frequently in the ileum; MD is normally located on the contralateral side of the mesenteric margin, while ileal duplication cyst occurs either on the mesenteric margin or the contralateral side. MD is often complicated with ectopic gastric mucosa; therefore, abdominal pain responsive to antacids is more frequently present in MD patients than in ileal DAT patients. Furthermore, MD is known to often cause a series of complications, such as diverticulitis, gastrointestinal bleeding or perforation, and intestinal obstruction, whereas these complications are relatively less common in ileal DAT. However, it is almost impossible to distinguish DAT from MD prior to operation if the ileum is involved. A previous study conducted in Japan reported that only 11.2% of ileal duplication cases could be correctly diagnosed before operation, 18.2% misdiagnosed as ileal intussusception, 15.1% as ileal mass, 14.4% as ileus, and 26.7% as abdominal pain of unknown cause[17]. Therefore, it will easily lead to the misdiagnosis of ileal DAT as MD. As MD is the most frequent gastrointestinal malformation, a suspected diagnosis of MD was made and indicated for exploratory laparotomy in our case. Appendicitis also needs to be excluded as the primary complaint was right lower quadrant pain in this patient, especially if complicating infection occurred in the duplication cyst. Unfortunately, the ileal duplication, which located 15 cm proximal to the ileocecal valve, was missed in previous appendectomy. The possibility of ileal duplication should be excluded for a patient diagnosed with suspicious MD or appendicitis but exhibiting gastrointestinal bleeding and/or intestinal obstruction. Use of laparoscopy may be helpful in identifying any suspicious ileal diseases when a diagnosis of MD or appendicitis is doubtable. Double-balloon enteroscopy may be another effective investigational technique for the diagnosis of ileal DAT if an additional ileal lumenal orifice is visualized[4,18,19].

Symptomatic treatment, such as acid-suppressing medications, may be effective in some cases if the symptoms are primarily associated with ectopic gastric mucosae. Like the possibility of adenocarcinoma in MD with complicating ectopic gastric mucosa, malignant transformation of ileal duplication cyst with complicating gastric mucosa heterotopia is also a major concern in adult patients as epithelial instability is seen in long-standing duplication cysts. A historic review published by Johnson and his colleagues[5] reported that three out of 13 (23.1%) adult ileal DAT patients had ileal cancer, including adenocarcinoma in two patients and squamous cell carcinoma in one patient. Thus, radical resection of the duplication cyst along with the affected native intestinal segment remains the mainstay modality of definitive treatment[5,20].

In conclusion, our report described ileal DAT, a rare congenital gastrointestinal malformation uncommonly seen in adults. This rare condition exhibits no specific manifestations although CT enterography scan and Tc-99m pertechnetate scintigraphy may identify some characteristic appearance of intussusception and MD. Surgical resection is thought to be the most effective treatment modality. Use of laparoscopy will allow a direct visualization and concomitant resection of possible ileal DAT.