Acute mesenteric venous thrombosis (MVT) accounts for 5%-10% of acute mesenteric ischemia, although it is rare in the absence of abdominal malignancy or liver cirrhosis[1,2]. Acute MVT is potentially lethal because it can result in intestinal ischemia and, ultimately, intestinal infarction requiring surgical intervention. Although intestinal gangrene resulting from mesenteric venous occlusion was first reported by Elliot[3], it was only after the detailed publication of Warren et al[4] in 1935 that MVT became known as a distinct clinical entity related to mesenteric ischemia.

Recent advances and widespread use of diagnostic modalities, in particular computed tomography (CT), have facilitated the early detection of MVT before laparotomy; systemic anticoagulation as early treatment for MVT prevents thrombus propagation and has resulted in a decrease in the reported mortality rate[5,6]. Nevertheless, the decision between laparotomy vs conservative treatment with anticoagulation can be difficult in patients with suspected bowel ischemia. Complicating matters, the border between ischemic bowel and viable bowel is often diffuse when exploratory laparotomy is performed in the acute stage. Because the viability of bowel is difficult to determine, overly aggressive bowel resection may result with consequent short bowel syndrome. We describe herein a patient with acute MVT and bowel ischemia who was treated with prompt anticoagulation and delayed short-segment bowel resection.

A 25-year-old male was referred to our emergency department from an outside hospital after experiencing 3 d of abdominal pain. The pain was gradually increasing in intensity and was squeezing and continuous in nature; he also noted blood-tinged stools. On abdominal examination, the patient complained of epigastric and left lower-quadrant tenderness to palpation, and the bowel sounds were decreased. Laboratory evaluation showed leukocytosis with a left shift (white blood cell count, 14100/mm3; segmented neutrophils, 94.5%). The erythrocyte sedimentation rate was 29.0 mm/h, the C-reactive protein level was 18.61 mg/dL, the platelet count was 258000/mm3, the hemoglobin level was 14.8 g/dL, the international normalized ratio (INR) was 1.22, the activated partial thromboplastin time was 39.6 s, and the D-dimer level was increased to 1344 μg/dL (normal range, < 340 μg/dL). Hypercoagulability testing, including protein S, protein C, and antithrombin-III, was within normal limits. None of the following were detected: factor V Leiden mutation, prothrombin G20210A mutation, activated protein C resistance, anticardiolipin antibodies, antiphospholipid antibodies, or lupus anticoagulant. CT demonstrated complete thrombosis of the superior mesenteric vein (SMV) and partial thrombosis of the portal vein. An abnormal intraperitoneal fluid collection was noted around the liver and the pouch of Douglas, and the affected small bowel had an edematous and thickened wall with decreased enhancement, suggesting bowel ischemia (Figure 1). 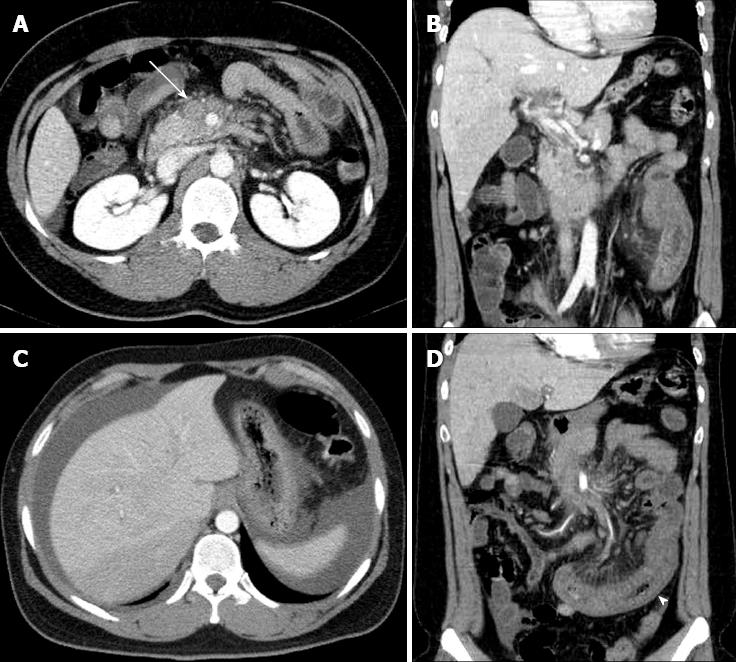 Figure 1 Abdominal computed tomography demonstrates an acute mesenteric venous thrombosis at the time of initial presentation. A: A thrombus (arrow) and perivenous infiltration at the proximal superior mesenteric vein; B: extension into the portal vein; C: An abnormal fluid collection around the liver and spleen; D: The affected small bowel (arrow head) with long-segment wall thickening and decreased enhancement.

The initial treatment included intravenous fluid administration, prophylactic antibiotics, bowel rest, and nasogastric-tube bowel decompression, with close monitoring for signs of bowel necrosis. Anticoagulation was started at the time of diagnosis with low molecular weight heparin (Enoxaparin, 1 mg/kg subcutaneous injection twice daily). The patient’s abdominal pain gradually decreased over 1 wk of conservative management. With continuing parenteral nutrition and anticoagulation, his clinical condition stabilized 18 d after the initiation of treatment and he started oral intake with sips of water. He was able to progress to some oral food intake, however intermittent abdominal discomfort and fullness occurred when he tried to increase his oral intake further. At this point, we were concerned about the possibility of bowel stricture and discussed with him the likely ultimate need for surgical exploration. The patient strongly desired a longer period of conservative management, so after 5 wk in the hospital he was discharged on oral anticoagulation.

During the follow-up period, his INR was regulated at the outpatient clinic within the optimal range of 2.0 to 3.0. Unfortunately, he returned to our emergency department 5 wk after discharge with abdominal pain, distension, and vomiting. A small bowel ileus was detected on plain abdominal radiography, and CT showed dilation of the proximal jejunal loop. The thrombus of the main portal vein had resolved, and the SMV demonstrated a remnant thrombus with obliteration; mesenteric congestion with development of collateral circulation was also present (Figure 2). We suspected bowel stricture due to the previous MVT with bowel ischemia and his complaint of abdominal distension, along with a weight loss of 8 kg over 2 mo. He received bowel decompression through a nasogastric tube and underwent scheduled laparotomy 2 d after the second admission. At surgery, a short-segment stricture of the distal upper jejunum with proximal dilatation was noted; the bowel color was normal (Figure 3). We performed segmental resection of 6 cm of the small bowel and a functional side-to-side anastomosis with staplers. The patient’s postoperative course was uneventful and he was discharged 1 wk after surgery. He receives regular follow-up at the outpatient clinic and has been taking oral anticoagulation, without a recurrence, for 2 years. 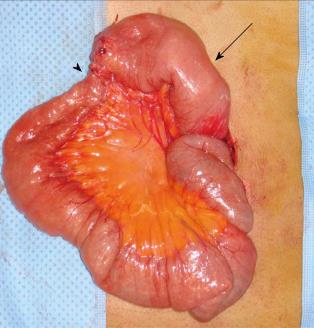 Currently, MVT is recognized as a multifactorial disorder predisposed by some genetic and acquired risk factors. Several genetic and acquired risk factors such as factor V Leiden mutation, prothrombin G20210A mutation, protein S deficiency, protein C deficiency, antithrombin-III deficiency, activated protein C resistance, and antiphospholipid syndrome have been reported to be associated with MVT. In our case, we tried to find out risk factors mentioned above, but we could not find any risk factors including a local inflammatory disease. The JAK-2 V617F mutation, which is associated with myeloproliferative disorder, has been recently reported to be associated with splanchnic vein thrombosis in a number of series[7,8]. Therefore, determination of this mutation may contribute to the search for genetic determinant of MVT, and further research will define the role and clinical significance of this mutation.

The management of acute MVT has changed over recent decades, however there is no consensus on its optimal management, especially in patients with bowel ischemia. Currently, systemic anticoagulation for the prevention of thrombus propagation is a well-recognized treatment modality and the mainstay of treatment in patients with acute MVT. Abdu et al[5], in their literature review involving 372 patients, reported that the addition of anticoagulation to previous treatment modalities improves survival rates and reduces recurrence rates in patients with MVT. However, they still recommend prompt surgical intervention. Since the 1990s, several studies have reported the feasibility of non-operative management for acute MVT[2,9-11]. Brunaud et al[2] determined that the morbidity, mortality, and survival rates are similar in surgical and non-surgical groups, with a shorter length of hospital stay in patients who avoid surgery. They also reported non-transmural infarction in 83% of resected specimens in the surgical group and concluded that the non-operative approach, when indicated, could avoid the resection of small bowel that is macroscopically infarcted but potentially curable with anticoagulation.

There are 2 potential difficulties in the management of patients with acute-stage MVT. The first is the decision between prompt surgical exploration or conservative treatment with anticoagulation, and the second is the difficulty in confirming bowel viability if surgical exploration is conducted. Most of the literature on the subject considers surgical exploration to be indicated if there are signs of peritoneal irritation at presentation. However, Brunaud et al[2] discussed the finding that peritoneal signs may not strictly correlate with the severity of bowel ischemia and suggested that new criteria, such as bowel-wall thickness and bowel-wall enhancement on the arterial phase of CT, need further evaluation. Our patient complained of abdominal pain and had tenderness to palpation, with the CT findings of an abnormal fluid collection and edematous bowel with wall thickening. However, conservative management with bowel rest and anticoagulation did not lead to transmural infarction of the affected bowel (bowel gangrene or perforation). We agree that further research into alternate criteria for surgical exploration, perhaps specific CT findings, is necessary to improve management in these patients.

Limited areas of infarcted bowel can be surgically resected and anastomosed without significant morbidity, however when extensive ischemia is present, surgeons should try to conserve as much bowel as possible. Unfortunately, the border between ischemic bowel and viable bowel is often diffuse, making viability difficult to determine. Bowel viability is typically assessed using Doppler examination and the clinician’s judgment; when the diagnosis is in doubt, a second-look operation is usually planned and performed[12,13]. Currently, numerous other techniques for assessing intestinal viability are available[14], however there is no consensus regarding their clinical usefulness. Further studies are needed to determine the value of various methods in the diagnosis of MVT and to standardize these methods.

After patients recover from the acute stage of MVT, the development of a small bowel stricture is among the possible complications during the chronic stage[15,16]. Arguably, conservative management with anticoagulation requires a more prolonged treatment period and increases patient discomfort due to the diet restrictions and need for hospitalization. Therefore, in patients with limited acute-stage bowel involvement on CT, early surgical exploration could be a more appropriate treatment, eliminating the above-mentioned shortcomings of conservative treatment. Nevertheless, the more important consideration in these patients is the possibility of recurrence. Though the reported MVT recurrence rate seems to be low while patients are receiving anticoagulation[17], recurrence is still possible, and its surgical treatment may lead to catastrophic sequelae such as short bowel syndrome.

In summary, surgical exploration in acute MVT is appropriate to be limited to the patients with definite signs of bowel infarction; in equivocal patients, anticoagulation for potentially reversible bowel ischemia could be an appropriate management technique to prevent or limit future bowel resection. Of course, patients undergoing conservative management need to be closely observed for evidence of clinical deterioration.