Acquired immune deficiency syndrome (AIDS)-related lymphoma (ARL) remains the main cause of AIDS-related deaths in the highly active anti-retroviral therapy (HAART) era. Recently, rearrangement of MYC is associated with poor prognosis in patients with diffuse large B-cell lymphoma. Here, we report a rare case of gastrointestinal (GI)-ARL with MYC rearrangements and coinfected with Epstein-Barr virus (EBV) infection presenting with various endoscopic findings. A 38-year-old homosexual man who presented with anemia and was diagnosed with an human immunodeficiency virus infection for the first time. GI endoscopy revealed multiple dish-like lesions, ulcerations, bloody spots, nodular masses with active bleeding in the stomach, erythematous flat lesions in the duodenum, and multiple nodular masses in the colon and rectum. Magnified endoscopy with narrow band imaging showed a honeycomb-like pattern without irregular microvessels in the dish-like lesions of the stomach. Biopsy specimens from the stomach, duodenum, colon, and rectum revealed diffuse large B-cell lymphoma concomitant with EBV infection that was detected by high tissue EBV-polymerase chain reaction levels and Epstein-Barr virus small RNAs in situ hybridization. Fluorescence in situ hybridization analysis revealed a fusion between the immunoglobulin heavy chain (IgH) and c-MYC genes, but not between the IgH and BCL2 loci. After 1-mo of treatment with HAART and R-CHOP, endoscopic appearance improved remarkably, and the histological features of the biopsy specimens revealed no evidence of lymphoma. However, he died from multiple organ failure on the 139th day after diagnosis. The cause of his poor outcome may be related to MYC rearrangement. The GI tract involvement in ARL is rarely reported, and its endoscopic findings are various and may be different from those in non-AIDS GI lymphoma; thus, we also conducted a literature review of GI-ARL cases.

Core tip: Endoscopic findings in gastrointestinal-acquired immune deficiency syndrome (GI-AIDS) related lymphoma (ARL) are miscellaneous and may be different from non-AIDS GI lymphoma. We report a rare case of GI-ARL with MYC rearrangements and coinfected with Epstein-Barr virus infection, and there are multiple findings involving stomach, duodenum, and colon and rectum. Magnified endoscopy with narrow band imaging showed a honeycomb-like pattern without irregular microvessels in the dish-like lesions of the stomach. Moreover we conducted literature review of GI-ARL. To our knowledge, this is the first report of GI-ARL with MYC arrangements and presenting an atypical endoscopic appearances.

Non-Hodgkin-lymphoma (NHL) occurs in 5%-10% of individuals with an human immunodeficiency virus (HIV) infection. The early diagnosis of acquired immunodeficiency syndrome (AIDS)-related lymphoma (ARL) is highly important because patients with ARL tend to exhibit an aggressive clinical course, short survival, and poor treatment response. Chromosomal translocations of 8q24, encoding the c-myc oncogene, are considered to be associated with NHL oncogenesis, and are normally seen in patients with Burkitt lymphoma[1]. Recently, MYC rearrangements have been seen occasionally in diffuse large B-cell lymphoma (DLBCL) and are associated with a poor prognosis[2]. Here, we report a rare case of gastrointestinal (GI)-ARL with MYC rearrangements and an Epstein-Barr virus (EBV) infection presenting with various endoscopic findings. As the endoscopic findings in ARL are variable and may be different from those of non-AIDS GI lymphoma, we conducted a literature review of GI-ARL cases. 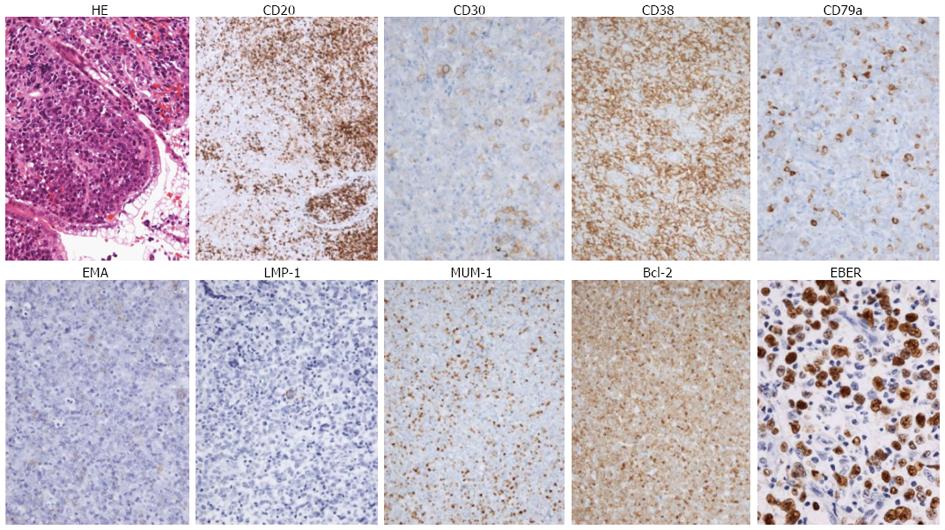 The incidence of ARL has not decreased over time despite the widespread use of chemotherapy and the improved management of long-term HAART[3]. Furthermore, ARL remains the most frequently observed AIDS-defining event leading to death[3]. Therefore, the early diagnosis of ARL is very important. In 5%-10% of cases with DLBCL with typical morphology, a MYC rearrangement (MYC+) is also observed, and these cases are considered a sub-category of DLBCL[2]. The presence of a MYC rearrangement is associated with inferior overall survival and there is a trend for a reduction in event-free survival[4]. Our case had a poor prognosis in spite of their temporary clinical and endoscopic improvement after chemotherapy. We suggest that the aggressive course of his illness was related to MYC rearrangement.

Endoscopy with biopsy is essential to make a definite diagnosis of GI-ARL; however, it is usually indicated for patients with GI symptoms. In our case, he had only slight tenderness, but we performed endoscopy to investigate the cause of his anemia, which enabled us to make a diagnosis. The knowledge of the distinctive endoscopic appearance of GI-ARL also leads to an early diagnosis, but its detailed characteristics remain unknown. Therefore, we reviewed the English literature in the MEDLINE database by searching with the key words “HIV”, “lymphoma”, and “endoscopy” (Table 1). We identified 65 reports, but there was no description of endoscopic findings in 53; finally, we selected 12 reports.

The most frequently involved GI sites are the stomach (24%), small bowel (10%), and colon/rectum (7%). The most common site of involvement in the colon is the cecum (45%-75%), followed by the rectum[5]. However, in immunocompetent patients, GI lymphomas are found in the stomach in 50%-80% of all cases and rarely in the colon, small bowel, or perianal region[5]. There are a wide range of endoscopic findings in ARL. Findings of multiple, polypoid lesions, nodular masses, bulky tumor mass, or ulcerations are commonly found. Our search of the literature revealed no findings of multiple bloody spots with exudates or flat erythematous lesions in GI lymphoma. Previous study has shown that H. pylori-induced T-cell plays an important role in gastric mucosa-associated lymphoid tissue lymphoma development[6]. However, H. pylori was negative in this case, thus other mechanisms have been suggested. We believed that EBV activation caused by the immunosuppression in AIDS patients plays a role in the pathogenesis of the various and unique endoscopic findings, such as multiple nodular masses, bloody spots, and ulcers, because high EBV DNA blood levels are considered to be associated with the development of NHL[7].

In this case, we also perform magnified endoscopy using NBI. NBI endoscopy for diagnosing superficial gastric cancer is accurate for the diagnosis of cancer when the diagnostic triad of the disappearance of fine mucosal structures, microvascular dilation, and heterogeneity is used[8]. Our case did not satisfy this triad, suggesting that NBI endoscopy is a useful technique for the differential diagnosis of epithelial tumors and non-epithelial tumors.

Endoscopic biopsy is highly valuable to diagnose GI-ARL. We need to re-realize that GI-ARL can present with various endoscopic findings and involve the entire GI tract, which may be different from non-AIDS GI lymphoma due to differences in the immune status of patients with these conditions. NBI endoscopy may be used to differentiate GI-ARL from gastric cancer.

We thank Hisae Kawashiro, the clinical research coordinator, for helping with data collection. The authors thank all other clinical staff at the AIDS Clinical Center and all the staff of the endoscopy unit.