Mucormycosis is an uncommon opportunistic fungal infection with high mortality in liver transplant recipients. Mucormycosis of the gastrointestinal tract can manifest with features similar to ischemic colitis. Typically signs and symptoms of non-gangrenous ischemic colitis resolve spontaneously within 24-48 h. On the other hand, the clinical course of the mucormycosis is commonly fulminant. We encountered a case of invasive fungal colitis presenting with abdominal pain and hematochezia in a liver transplant recipient. Endoscopic examination showed multiple shallow ulcerations and edema with mucosal friabilities on the sigmoid and distal descending colon, which was consistent with ischemic colitis. However, the histological examination obtained from endoscopic biopsies showed fungal hyphae with surrounding inflammatory cells and mucosal necrosis. The patient was successfully managed with antifungal agent without surgical treatment. Thus, early diagnosis and treatment is essential for improving the prognosis of invasive fungal infection after liver transplantation.

Mucormycosis is a rare but highly invasive opportunistic fungal infection in liver transplant recipients. Clinical manifestations can be rhino-sino-orbital, rhinocerebral, pulmonary, gastrointestinal, genitourinary, cutaneous and disseminated[1]. Mucormycosis of the gastrointestinal tract manifests with features similar to ischemic colitis[2]. Mucor, one of fungi that cause mucormycosis, has a special affinity for blood vessels[3], which may explain the clinical presentation of colonic infection as an ischemic colitis pattern. Ischemic colitis is associated with inadequate blood flow in the colon leading to colonic inflammation, one of the most common vascular disorders of the intestinal tract. Most cases of ischemic colitis are transient and resolve spontaneously without complication[4]. However, a deteriorating course of ischemic colitis should warrant further investigation. Herein we present a case of colonic mucormycosis presenting with ischemic colitis in a liver transplant recipient with diabetes mellitus who had been on immunosuppressive agents.

A 42-year-old man with chronic hepatitis B underwent deceased donor liver transplantation (DDLT) due to hepatocellular carcinoma in a background of liver cirrhosis. He suffered from diabetes mellitus for 26 mo and was treated with insulin. He had an extremely high blood glucose level after he stopped insulin therapy in the last few months on his own initiative. His general condition was good after transplantation and there were no immediate complications such as acute rejection or infection. Postoperative immunosuppressive agents with methylprednisolone, mycophenolate mofetil, and tacrolimus were used. On the fifth day after DDLT, the patient complained of abdominal pain and small amount of hematochezia. On physical examination, his vital signs were normal except slightly elevated pulse rate (101 beats/min). His abdomen was soft but diffusely tender without peritoneal irritation signs. Laboratory analysis revealed a leukocyte count of 27800/mm3 with 92% segment form, hemoglobin of 12.1 g/dL, a platelet count of 65000/mm3, and C-reactive protein of 3.48 mg/dL. A computed tomography scan of the abdomen revealed mild to moderate symmetrical wall thickening with decreased mural attenuation was observed from the hepatic flexure to distal sigmoid colon (Figure 1). Because of suspected ischemic colitis, the patient was treated with bowel rest, intravenous fluid replacement, and antibiotics. However, the patient’s symptoms continued to deteriorate. On the seventh day after DDLT, the decision was made to perform an endoscopic evaluation to elucidate the exact cause of abdominal pain and rectal bleeding. The sigmoidoscopic examination revealed multiple shallow ulcerations, edema with mucosal friabilities, and loss of the normal vascular appearance on the sigmoid and distal descending colon (Figure 2A). Microscopic examination showed several elongated fungal hyphae that stained light blue with haematoxylin and eosin (Figure 3A), were periodic acid Schiff positive and stained dark brown to black with the Grocott-Gomori methenamine silver method (Figure 3B). The fungal hyphae consisted of non-septated filaments, irregularly wide (6-9 μm diameter) hyphae with frequent right angle branching. These morphological features suggested infection by Mucoraceae. Based on the clinical findings and the morphological features of the fungal organisms, the diagnosis of mucormycosis was made. The patient was initially treated with intravenous high dose (1 mg/kg per day) amphotericin B, later replaced with liposomal amphotericin B due to azotemia. A follow-up sigmoidoscopy showed significant reduction in mucosal edema and inflammation compared to previous endoscopic findings (Figure 2B). The patient’s symptoms disappeared and he made a good recovery. 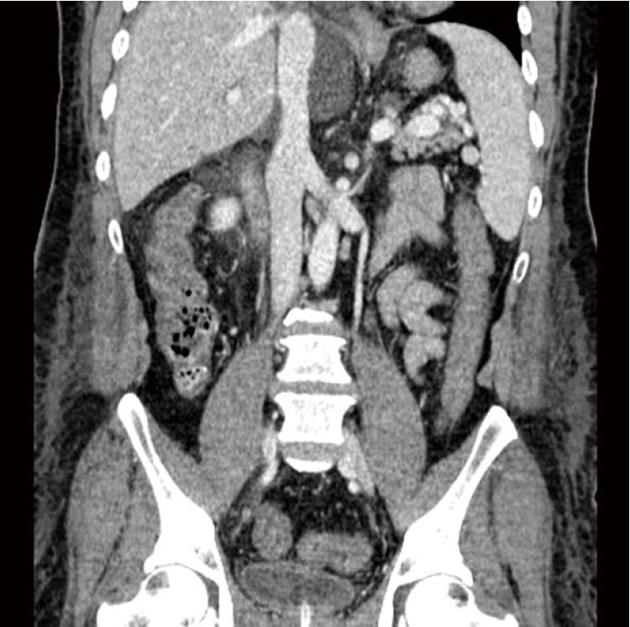 Figure 2 Sigmoidoscopic findings. A: The mucosa shows multiple shallow ulcerations, edema with friability of the mucosa, and loss of the normal vascular appearance; B: Two weeks after anti-fungal therapy, the mucosal edema and ulcerative lesions are markedly improved and mucosal scar changes were seen on the sigmoid colon. 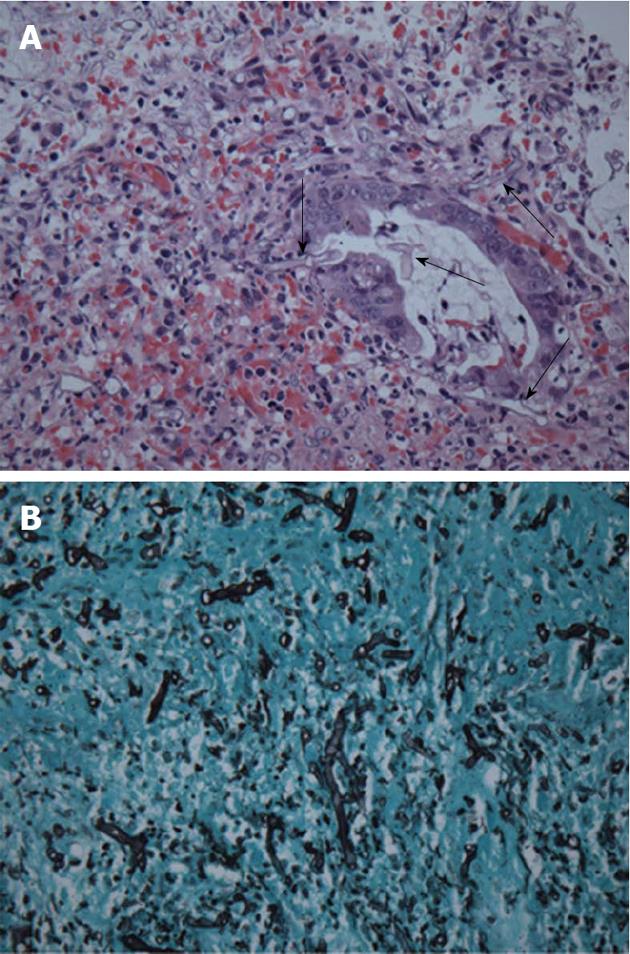 Mucormycosis is an uncommon fungal infection caused by fungi of the class Zygomycetes, order Mucorales and Entomorphthorales[5]. The following risk factors are associated with mucormycosis: neutropenia, history of diabetes mellitus, hyperglycemia, acidosis, preexisting renal impairment, deferoxamine therapy, immunosuppressive agents and steroid use[1]. Our patient was diagnosed with diabetes mellitus before this diagnosis and received postoperative immunosuppressive agents after liver transplantation. Mucormycosis manifests a variety of different syndromes in humans, particularly in solid organ transplant recipients[1,6]. Although unusual, mucormycosis of the gastrointestinal tract may occur as a result of ingesting fungal spores. A review of the 116 solid organ transplant recipients with mucormycosis found that the site of involvement of gastrointestinal mucormycosis (n = 13, 11.2%), included stomach in 9 (69.2%), colon 1 (7.6%), esophagus 1 (7.6%) and liver 1 (7.6%)[1]. Nonspecific abdominal pain and distention associated with nausea and vomiting are the most common symptoms. Fever and gastrointestinal bleeding may also occur[7]. In our case, the patient complained of abdominal pain and hematochezia. We performed a sigmoidoscopy to determine the exact cause of those symptoms. One previous study showed that endoscopic examination is a valuable diagnostic tool to establish an accurate diagnosis of transplant recipients with lower gastrointestinal complaints[8]. These symptoms occur typically in ischemic colitis[2]. In a review of 85 patients, endoscopic appearance of transient ischemic colitis included edematous and fragile mucosa, segmental erythema, scattered erosion, longitudinal ulcerations, petechial hemorrhages interspersed with pale areas, and purple hemorrhagic nodules[9]. The endoscopic findings for our patient resembled ischemic colitis. Successful current treatment for mucormycosis involves a combined approach; rapidity of diagnosis, the control of the underlying predisposing illness, appropriate surgical debridement of infected tissue and prompt initiation of antifungal therapy[5]. Until recently, only the polyene class of drugs, including amphotericin B deoxycholate and its lipid derivatives, demonstrated activity against the agents of mucormycosis. The lipid formulations of amphotericin are significantly less nephrotoxic than amphotericin B deoxycholate and can be safely administered at higher doses for a longer period of time[7]. Surgery is essential in decreasing the fungal burden by removing infarcted tissues, where amphotericin B cannot distribute. In a recent study, a patient who was precluded from extensive surgical intervention did not respond to amphotericin B but was treated successfully with a combination of posaconazole and liposomal amphotericin B without surgical treatment[10]. Mucormycosis is generally a severe infection with an overall survival rate of patients of approximately 50%[7]. Appropriate treatment must be instituted early if the clinical suspicion is high, even before the results of culture and/or histopathological studies have been obtained, and currently, the administration of systemic amphotericin B and/or surgical debridement of the lesions are considered standard therapy[7].

In this case, the patient with diabetes mellitus had received immunosuppressive agents after liver transplantation and presumptive diagnosis of ischemic colitis was initially suspected. The patient was treated with supportive care including bowel rest, intravenous fluid replacement, and antibiotics. However, the patient’s symptoms showed a deteriorating condition. Non-improving ischemic colitis warrants further inquiry into causes in an immunosuppressed patient, especially liver transplant recipients with risk factors of mucormycosis. He was finally diagnosed by endoscopic biopsies and successfully treated with strict control of blood sugar level and antifungal agent. Thus, early diagnosis and treatment are essential for improving the prognosis of invasive fungal infection such as colonic mucormycosis after liver transplantation.