Chronic pancreatitis (CP) is a progressive inflammatory disease of the pancreas characterized by destruction of the pancreatic parenchyma with subsequent fibrosis that leads to pancreatic exocrine and endocrine insufficiency. Abdominal pain and local complications (bile duct or duodenal stenosis and pancreatic tumor) secondary to CP are indications for therapy. At the beginning, medical therapy is used. More invasive treatment is recommended for patients with pancreatic duct stones (PDS) and pancreatic obstruction in whom standard medical therapy is not sufficient. Recently, Clarke et al assessed the long-term effectiveness of endoscopic therapy (ET) in CP patients. The authors compared ET with medical treatment. They reported that ET was clinically successful in 50% of patients with symptomatic CP. In this commentary, current CP treatment, including indications for ET and surgery in CP patients, is discussed. Recommendations for endoscopic treatment of CP according to the European Society of Gastrointestinal Endoscopy Clinical Guidelines are reviewed. Different surgical methods used in the treatment of CP patients are also discussed. ET is the most useful in patients with large PDS, pancreatic duct obstruction and dilation. It should be the first-line option because it is less invasive than surgery. Surgery should be the first-line option in patients in whom ET has failed or in those with a pancreatic mass with suspicion of malignancy. ET is a very effective and less invasive procedure, but it cannot be recommended as the treatment of choice in all CP patients.

I have read with great interest the recent article by Clarke et al[1] describing the endoscopic treatment in patients with chronic pancreatitis (CP). I would strongly recommend this article to the readers of World Journal of Gastroenterology. CP is a progressive inflammatory disease of the pancreas characterized by destruction of the pancreatic parenchyma with subsequent fibrosis that leads to pancreatic exocrine and endocrine insufficiency[2,3].

We can distinguish two stages in the natural CP course. At the beginning, recurrent acute pancreatitis is observed in patients. In the later stage, pancreatic exocrine and endocrine insufficiency manifested by maldigestion and malabsorption, loss of weight, steatorrhea and diabetes are reported[4].

In their study, Clarke et al[1] analyzed the use and long-term effectiveness of ET in CP patients. The authors compared ET with medical treatment. They reported that ET was clinically successful in 50% of patients with symptomatic CP. When ET was not successful, surgery had successful outcomes in 50% of patients. Medical therapy was successful only in 31% of symptomatic patients. Based on their study, the authors concluded that ET was an effective treatment method in CP patients. This is a significant study and I agree with the authors’ opinion. However, I would like to precisely define the use of endoscopic methods in CP patients. It is important to know which patients are good candidates for ET. Can we recommend this treatment method for all CP patients? In order to answer this question I would like to cite the most recent (2012) recommendations of the European Society of Gastrointestinal Endoscopy (ESGE) regarding therapeutic intervention in CP patients[8].

Some authors[9] recommend surgery as an initial treatment in CP patients with pancreatic and bile duct strictures with upstream dilation, and ET as a second-line option in high-risk surgical candidates.

Clarke et al[1] analyzed a cohort of 146 patients with CP, including 71 (49%) patients receiving ET. The authors analyzed patients following pancreatic and biliary sphincterotomy, pancreatic duct dilation, stone extraction, ESWL pancreatic and bile duct stenting, and transgastric pseudocyst drainage. The pancreatic duct stenting was the most frequent endoscopic procedure. The interesting aspect of this study is the analysis of 8 (11%) so-called bridge patients, in whom ET as the first step was followed by surgery. Another interesting aspect is comparison of the endoscopic with medical treatment.

There are a number of publications comparing endoscopy with surgery in CP patients in the literature. ET is less invasive than surgery. However, according to most authors, surgery is more effective compared to endoscopy[24,25]. Hirota et al[26] compared costs of these two treatment methods. Duration and frequency of hospitalizations, and medical costs were similar between the short-period endoscopic treatment group and surgery group. On the other hand, patients in the long-period endoscopic treatment group required significantly longer and more frequent hospitalizations, and had higher medical costs than both the short-period endoscopic treatment group and the surgery group. According to the authors’ analysis, patients who underwent serial endoscopic stenting for more than 1 year showed no benefit compared with surgical treatment in terms of the frequency of hospital stays and medical costs.

In addition, I would like to describe the role of surgery in CP patients. I agree with Clarke et al[1] that ET is effective in CP patients, but I would not recommend this treatment method in all patients. In my opinion, patients with multiple strictures and dilation within the pancreatic duct can have more benefits following surgery. It is my belief that patients with a pancreatic mass with suspicion of malignancy and duodenal stricture secondary to CP should also undergo surgery. In the most frequently encountered situation, PDS are treated endoscopically, but in some cases surgery is necessary. In the study of Liu et al[5], indications for ET were ≤ 3 stones, stones confined to the pancreatic head and body, absence of restricted pancreatic duct, PDS diameter ≤ 10 mm, and noncompacted stone(s). Surgery was indicated for patients who needed treatment but did not meet the above-mentioned indications, or for whom conservative therapy had failed.

We can distinguish the following types of surgical procedures in CP patients: drainage operations (Puestow, Partington-Rochelle, Duval procedures), resectional operations (partial and subtotal or total pancreatectomies), resections with extended drainage (Beger, Frey procedures) and neurolysis (celiac plexus block). The most frequently performed surgical procedures are presented in Figure 1. Total pancreatectomy with islet autotransplantation is an alternative surgical option for CP patients. It is important that this procedure can relieve pain and preserve β-cells in patients when other therapies fail[19,20]. Sutherland et al[20] from the University of Minnessota reported a > 30-year single-center series with good treatment results. 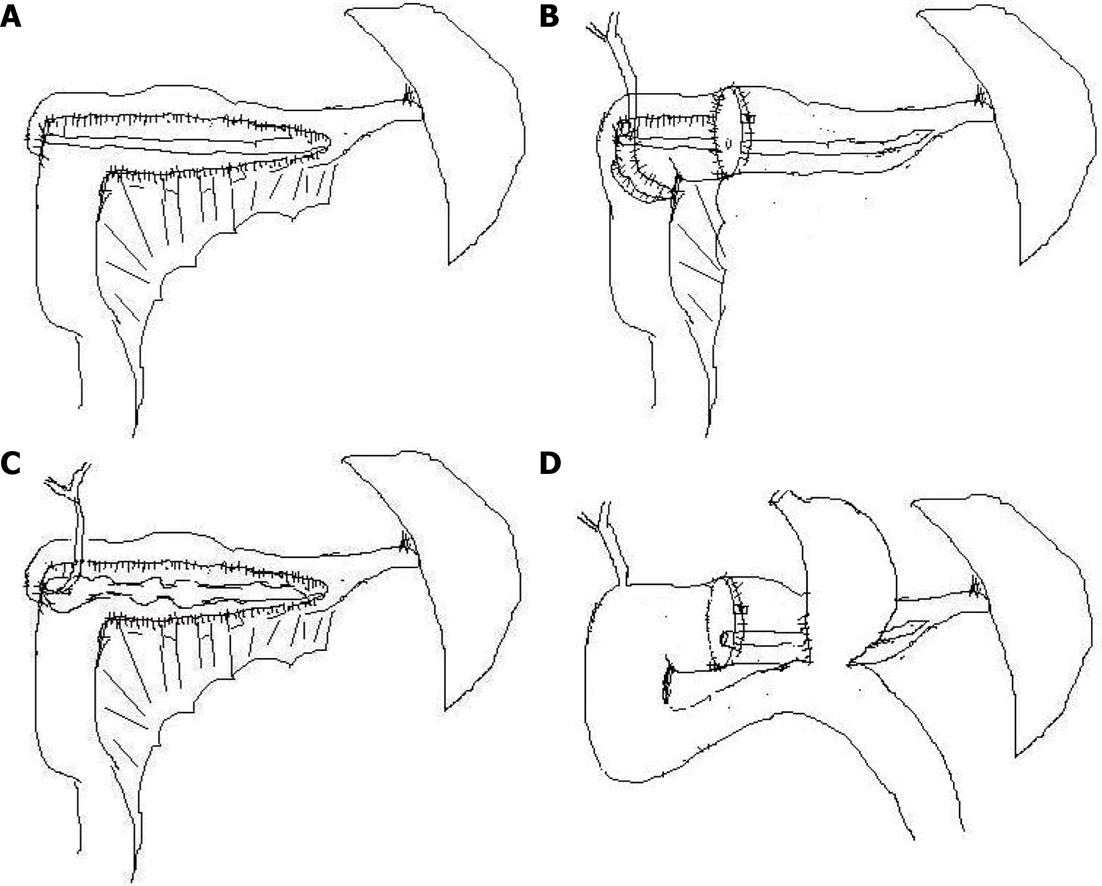 According to Palanivelu et al[23], the Partington procedure is still the procedure of choice for patients with a dilated main pancreatic duct but without an inflammatory pancreatic head mass because it is simple and associated with a low postoperative morbidity and mortality, preserving pancreatic exocrine and endocrine function. Frey and Beger operations as duodenum-preserving pancreatic head resections (DPPHRs) with extended pancreatic duct drainage are recommended for patients with an inflammatory pancreatic head mass[29]. Furthermore, long-term results of two (Beger and Frey) DPPHRs in CP were compared by Keck et al[30]. This study revealed a better pain relief following the Frey procedure compared to the Beger operation.

According to another recent study by Keck et al[33], both DPPHR and PD allow the achievement of effective pain relief and good quality of life without differences in endocrine or exocrine function in CP patients. According to Hildebrand et al[34], the Frey procedure is an advantageous alternative to the Whipple operation in CP patients. It is comparable to PD in pain relief and is less invasive (with lower morbidity and mortality rates, and a lower rate of newly occurring diabetes mellitus) than PD.

Similarly, McClaine et al[35] reported that DPPHR was equally as effective as PD in relieving pain and improving quality of life in CP patients; DPPHR was associated with a shorter hospital stay and less blood loss.

The choice of optimal surgery depends on size, number and location of PDS or presence of other complications (pancreatic mass, duodenal or biliary stenosis). In patients with pancreatic ductal stones, the PDS type should firstly be identified. Depending on location, four types of PDS have been established: type I in the head of the pancreas, type II in the body, type III in the tail, and type IV in the whole pancreas. Drainage by pancreatic ductotomy is generally recommended for patients with a dilated pancreatic duct (≥ 6 mm). The Beger procedure and PD are suitable for type I PDS; however, distal pancreatectomy is useful for type III PDS. For patients with type II PDS, the Partington-Rochelle procedure or segmental resection of the pancreas is recommended. For patients with type IV PDS, an alternative to drainage is a Child procedure (subtotal pancreatectomy)[4,5].

In conclusion, all methods including medical, endoscopic and surgical treatment are used in CP patients. Medical therapy is suitable in patients without complications at the outset of CP. ET is the most useful in patients with large PDS, pancreatic duct obstruction and dilation. It should be the first-line option because it is less invasive than surgery. The method of ET (pancreatic sphincterotomy or ESWL followed by pancreatic duct stenting) depends on the stone location and the pancreatic duct diameter. Surgery should be the first-line option in patients in whom ET failed or those with pancreatic mass with suspicion of malignancy. Therefore, although ET is a very effective and less invasive procedure, it cannot be recommended as the treatment of choice in all CP patients. In my opinion, surgical treatment without endoscopic treatment should be recommended for patients with duodenal stricture and pancreatic mass with suspicion of malignancy. In these patients, endoscopy should be used only in the diagnosis.