Celiac disease (CD) is frequently associated with neurological disorders, but very few reports concern the association with ischemic stroke. A 26-year-old woman affected by CD with secondary amenorrhea, carrier of a homozygous 5,10-methylenetetrahydrofolate reductase mutation with hyperhomocysteinemia, was affected by two occipital ischemic strokes within a period of 5 mo. At the time of the second stroke, while she was being treated with folic acid, acetylsalicylic acid and a gluten-free diet, she had left hemianopsia, left hemiparesthesias, and gait imbalance. Brain magnetic resonance imaging showed a subacute right occipital ischemic lesion, which was extended to the dorsal region of the right thalamus and the ipsilateral thalamo-capsular junction. Antitransglutaminase and deamidated gliadin peptide antibodies were no longer present, while antinuclear antibodies, antineuronal antibodies and immune circulating complexes were only slightly elevated. Since the patient was taking folic acid, her homocysteine ​​levels were almost normal and apparently not sufficient alone to explain the clinical event. A conventional cerebral angiography showed no signs of vasculitis. Finally, rare causes of occipital stroke in young patients, such as Fabry’s disease and mitochondrial myopathy, encephalomyopathy, lactic acidosis and stroke-like symptoms, were also excluded by appropriate tests. Thus, the most probable cause for the recurrent strokes in this young woman remained CD, although the mechanisms involved are still unknown. The two main hypotheses concern malabsorption (with consequent deficiency of vitamins known to exert neurotrophic and neuroprotective effects) and immune-mediated mechanisms. CD should be kept in mind in the differential diagnosis of ischemic stroke in young patients.

Celiac disease (CD) is an immune-mediated enteropathy, resulting from a permanent intolerance to the gliadin component in dietary gluten. Its clinical presentation may include signs and symptoms of malabsorption, frequently associated with extra-intestinal manifestations. Several neurological disorders like peripheral neuropathy, cerebellar ataxia and dementia were found to be associated with the disease; epilepsy, bilateral occipital calcifications and rarely stroke[1-7] have also been reported in CD. This article illustrates the case of a young woman with asymptomatic CD, and carrier of the homozygous mutation of the gene encoding 5,10-methylenetetrahydrofolate reductase (MTHFR), who was affected by two occipital strokes within a period of 5 mo.

A 26-year-old woman with history of migraine without aura presented acute left hemiparesthesias (prevailing at lips and upper limb), mild weakness in her left arm, gait imbalance, unsteadiness and asthenia, while she was working hard in an archaeological site during a hot day. Since symptoms persisted, on the following day she was transported to the emergency department of our hospital and then admitted to the Stroke Unit.

The patient had a documented positivity of antitransglutaminase and antigliadin antibodies, which she had tested 7 years before because her sister was affected by CD. The patient had no gastrointestinal symptoms, but presented a secondary amenorrhea of at least two years duration. Duodenal biopsy showed a subtotal villous atrophy with an increased number of intraepithelial lymphocytes, so confirming the CD diagnosis. Her treatment consisted of a gluten-free diet, plus an estrogen-progestin therapy that she received for a period of 6 mo. The hormone therapy had been stopped 5 mo earlier when she was hospitalized elsewhere because of a left occipital ischemic stroke (transient right lateral homonymous hemianopsia). On that occasion, laboratory and genetic testing revealed the presence of a homozygous mutation of the MTHFR gene with hyperhomocysteinemia (31.5 mmol/L, normal value < 15 mmol/L). The patient was prescribed folic acid and acetylsalicylic acid.

On admission to our hospital, the patient appeared alert, oriented, cooperative and afebrile. Her neck was supple. She had left lateral homonymous hemianopsia, left hemiparesthesias and mild weakness in her left leg.

A brain CT scan showed, in addition to the previous left occipital infarction, a right occipital low-density area (maximum diameter 40 mm) suggesting an acute ischemic stroke involving the territory of the right posterior cerebral artery. There was no contrast enhancement of these lesions. Brain magnetic resonance imaging (MRI) confirmed the subacute right occipital lesion, which was extended to the dorsal region of the right thalamus and the ipsilateral thalamo-capsular junction (Figure 1). A conventional angiography of the aortic arch, supraortic branches and intracranial arteries showed a substantially normal picture, with poor visualization of the P3 segment and distal branches of the right posterior cerebral artery. In particular, no signs of vasculitis were found. Chest X-ray, abdominal ultrasound, electrocardiogram, electrocardiogram Holter monitoring, transthoracic echocardiogram, supraortic ultrasound and transcranial echo-Doppler with microbubbles to test the presence of patent foramen ovale, were all normal. Moreover, a bicipital muscle biopsy and an MRI spectroscopy of the gastrocnemius muscles before, during and after exercise were performed to test the hypothesis of mitochondrial disease and, in particular, of mitochondrial myopathy, encephalomyopathy, lactic acidosis and stroke-like symptoms (MELAS). Biochemical and molecular studies were performed to assess Fabry’s disease. The results of all these investigations were negative. 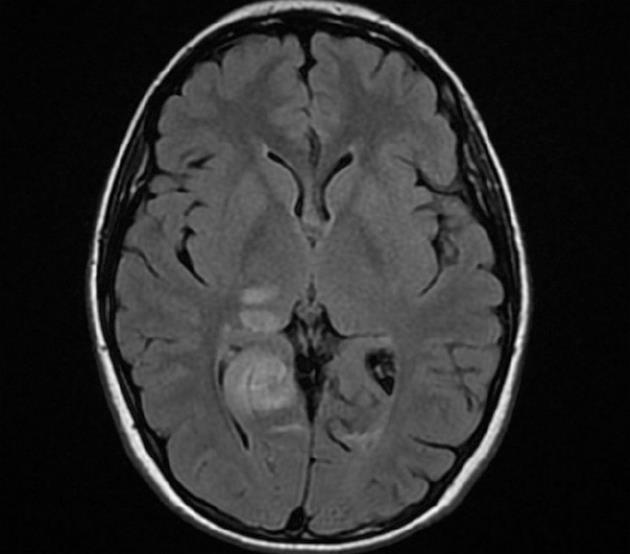 During hospitalization, there was a gradual improvement of neurological symptoms. The previous treatment with acetylsalicylic acid (100 mg/d) was replaced with clopidogrel (75 mg/d), and L-thyroxine (50 mcg/d) was started. Folic acid (5 mg/d), in addition to a gluten-free diet, was confirmed. At the time of discharge, the left lateral homonymous hemianopsia was still present. Five months after admission, the neurological picture was unchanged, but the patient was able to return to her job. There were no new acute cerebrovascular events.

Ischemic strokes occurring in patients younger than 30 years are a relatively rare event. The most important causes of cerebral ischemia in the young are cardioembolism, dissection of extracranial arteries, migraine, drugs and hypercoagulable states. Furthermore, premature atherosclerosis can also play an important etiological role. Uncommon causes include vasculitis, metabolic disorders and inherited diseases. However, the undetermined etiology is the most frequent reported cause of ischemic stroke in young patients[8]. In this case report, we have considered in the differential diagnosis two rare causes of occipital stroke in young adults: MELAS syndrome and Fabry’s Disease. MELAS[9] is a progressive disease characterized by acute neurological events resembling cerebral ischemia, associated with mitochondrial myopathy and hyperlactataemia. Ten different mutations of mitochondrial DNA have been identified, but most cases (about 80%) are due to the A3243G mutation encoding the transfer RNA (tRNA) of leucine. CT and MRI often show lesions located in the occipital lobes, which are sometimes associated with brain atrophy and intracranial calcifications. Increased levels of lactate are often present in the blood, and almost constant in the cerebrospinal fluid. Muscle biopsy is abnormal in 85% of patients, showing atypical mitochondrial proliferation with presence of “ragged red fibers” at the Gomori’s stain. The diagnosis is based on mitochondrial DNA analysis. Fabry’s disease[10] is a progressive multisystem inherited disease of glycosphingolipid metabolism. It is caused by mutations in the gene of α galactosidase A (chromosome Xq22). Its classic form, which mainly affects hemizygous males, is characterized by angiokeratomas, renal insufficiency with proteinuria, cardiomyopathy, and cochlear, vestibular and cerebrovascular symptoms. The final diagnosis for hemizygous males is based on the demonstration of α-galactosidase A deficiency, while in heterozygous females enzyme analysis is often inconclusive and genetic analysis is needed. In the present case, the diagnostic investigations performed for both MELAS and Fabry’s disease were negative.

Our patient presented mild hyperhomocysteinemia, which is recognized as an independent risk factor for cardiovascular diseases[11], acting through several possible prothrombotic mechanisms including the toxic action on vascular endothelium resulting in endothelial dysfunction, enhancement of both platelet adhesion and aggregation, endothelial factor V activation, protein C inhibition, and reduction of antithrombin III levels. Hyperhomocysteinemia ​​may result from reduced elimination due to renal insufficiency, from inadequate intake or malabsorption of folic acid and B vitamins, or from a mutation of genes coding for one of the three enzymes involved in homocysteine ​​metabolism: cystathionine β synthetase (CBS), MTHFR and methionine synthetase[12]. The MTHFR gene mutation was carried by our patient. This is a fairly common condition in the Caucasian population, with a prevalence of 8%-15% for the homozygous genotype and 65% for the heterozygous genotype. It does not seem to be more prevalent among patients with CD[13,14]. The MTHFR gene is located in the short arm of chromosome 1. Its mutation may be a cardiovascular risk factor only in subjects with a low intake of folic acid. At the time of the second stroke the patient was already taking folic acid. Thus, her homocysteine ​​levels were only slightly elevated and apparently not sufficient alone to explain the clinical event.

Since no other cerebrovascular risk factors were found, we concluded that CD could be involved in the pathogenesis of recurrent strokes in this patient. CD is an immune-mediated disorder of the small bowel, resulting from a permanent gluten intolerance. Its prevalence in the general population is about 1% and its presentation may be at any age: childhood, adolescence and also adulthood. The clinical picture of CD varies greatly, ranging from asymptomatic forms, to the “classic symptomatic” form with mainly intestinal symptoms, to “atypical” forms dominated by extra-intestinal symptoms[15]. The systemic involvement of CD may include skin, thyroid, pancreas, heart, joints, muscles, bones, reproductive system, liver, central and peripheral nervous system[16]. Approximately 10% of CD patients show neurological symptoms, including idiopathic cerebellar ataxia, peripheral neuropathy, various forms of epilepsy, myoclonus, migraine and dementia[17-20].

There are two main possible hypotheses concerning the pathogenesis of neurological manifestations in CD. Firstly, malabsorption with consequent deficiency of vitamins known to exert neurotrophic and neuroprotective effects (especially folic acid, vitamin B12, vitamin E) has long been thought to contribute to the neurodegenerative changes observed in patients with CD-related neurological manifestations. However, even plenty of vitamin supplementation does not improve the clinical course in these patients. Secondly, an emerging hypothesis is the possible participation of immune-mediated mechanisms. This hypothesis is strengthened by the evidence of lymphocytic infiltration of the central and peripheral nervous system[21-22] and the presence of serum antineuronal antibodies[23] in CD patients with neurological complications. In this regard, neurological manifestations might result from a combination of sub-threshold neurotoxic effects caused by gluten-related immune markers (e.g., antigliadin antibodies, deamidated gliadin peptide antibodies and antibodies to one or more tissue transglutaminse isoenzymes) in combination with antibodies directed against nervous system epitopes, including anti-Purkinje cell and antiganglioside antibodies[24]. However, the role of these antibodies in the pathogenesis of neurological dysfunction is not yet understood, even if there are elements supporting a mitochondrial-dependent neuronal apoptosis[25].

As far as the present case is concerned, the cause of recurrent ischemic strokes remains uncertain. The negativity of indices of inflammation and autoantibodies would exclude systemic vasculitis. The hypothesis of a primary vasculitis of the central nervous system still remains. In fact, this condition cannot be ruled out even by the negativity of cerebral angiography[29], and also cerebral biopsy is of limited value for the diagnosis due to its low sensitivity[29]. However, in addition to the lack of small vessel involvement on neuroimaging, the benign course of the disease in our patient in the absence of immunosuppressive treatment makes this hypothesis unlikely.

In conclusion, although the involved mechanisms are still unclear, CD should be considered as a potential etiology of stroke of unknown cause, particularly in young patients, even in the absence of gastrointestinal manifestations.