AIM: To evaluate for the first time the protein and mRNA expression of 14-3-3ε in gastric carcinogenesis.

RESULTS: Authors observed a significant reduction of 14-3-3ε protein expression in gastric cancer (GC) samples compared to their matched non-neoplastic tissue. Reduced levels of 14-3-3ε were also associated with diffuse-type GC and early-onset of this pathology. Our data suggest that reduced 14-3-3ε may have a role in gastric carcinogenesis process.

CONCLUSION: Our results reveal that the reduced 14-3-3ε expression in GC and investigation of 14-3-3ε interaction partners may help to elucidate the carcinogenesis process.

Although gastric cancer (GC) rates have decreased substantially in most parts of the world, it is still the fourth most frequent cancer type and the second highest cause of cancer mortality worldwide. A total of 989 600 new stomach cancer cases and 738 000 deaths are estimated to have occurred in 2008, accounting for 8% of the total cases and 10% of total deaths by cancer[1].

About 90% of stomach tumors are adenocarcinomas[2]. However, the etiology and disease evolution may vary among populations, primary tumor location, histological subtypes of adenocarcinoma, and other variables[3].

GC, as with other neoplasms, is a multifactorial disease that results from a combination of environmental factors and accumulation of generalized and specific genetic and epigenetic alterations. Chromosomal instability is characterized by changes in chromosome copy number (aneuploidy) and alterations in chromosomal regions, which may induce oncogene activation, tumor suppressor gene inactivation, or both[4]. The chromosomal aberrations that are constantly found in GC include gains of 3q, 7p, 7q, 8q, 13q, 17q, 20p and 20q and losses of 4q, 9p, 17p and 18q (for a review, see[5]). Our research group previously reported that the loss of one copy of TP53 locus (17p13) is commonly found in gastric tumors of individuals from a Brazilian population[6], as well as in GC cell lines[7-9]. Although TP53 is a key tumor suppressor gene in the carcinogenesis process[10], additional genes at 17p13 may play a role in gastric carcinogenesis.

The YWHAE gene is located at 17p13.3 and encodes the 14-3-3ε protein, one of the mammalian 14-3-3 protein family members that are highly conserved in eukaryotes. There are at least seven distinct 14-3-3 genes in vertebrates, giving rise to nine isoforms (α, β, γ, δ, ε, ζ, η, σ and τ/υ, with α and δ being phosphorylated forms of β and ζ, respectively)[11,12]. The 14-3-3 proteins are predominantly dimeric within the cell and bind either to multiple sites within single proteins or act as a bridge between two targets[13-15]. Up to now, > 300 proteins have been reported to interact with 14-3-3 proteins, including key signaling components, such as p53, Raf-1 kinase, Bcl-2 antagonist of cell death, protein kinase C, phophatidylinositol 3-kinase, and cdc25 phosphatase (RASGRF1)[12,13,15,16]. Although the exact 14-3-3 protein functions are not fully known, these proteins may act as a molecular scaffold, bringing together proteins that interact functionally and effecting phosphorylation-dependent cell regulation[12]. This protein family is involved in several biological processes and plays a regulatory role in processes such as apoptotic cell death, mitogenic signal transduction, and cell cycle control[13,17,18].

The isoform 14-3-3ε is the most highly conserved member of the 14-3-3 family, with conserved sequence in plants, yeast, and mammals[19,20]. Abnormal expression of 14-3-3ε has been found in some types of cancers. However, the role of 14-3-3ε in the carcinogenesis process is ambiguous and contradictory. Low expression of 14-3-3ε occurs in small cell lung cancer[21], laryngeal squamous cell carcinoma[22], and medulloblastoma[23], which suggest its role as a tumor suppressor gene. On the other hand, high expression of 14-3-3ε has been detected in renal carcinoma[24], astrocytoma[25], meningioma[26] and subependymomas[27], and, thus, probably it acts as a oncogene.

To the best of our knowledge, no study has evaluated the role of 14-3-3ε in gastric carcinogenesis until now. In the present study, we analyzed the 14-3-3ε gene and protein expression in GC and matched non-neoplastic gastric samples. We also evaluated the possible associations between 14-3-3ε and clinicopathological characteristics.

We first evaluated the normal distribution of all data using the Shapiro-Wilk normality test to determine subsequent use of appropriate tests for statistical comparison. Since 14-3-3ε mRNA and protein data did not present with a normal distribution, we performed parametric tests with bootstrapping, a re-sampling method. The re-sampling methods are relatively powerful and can control a type I error (false positive), reducing over-fit bias and internally validating the accuracy estimates. Bootstrapping methods also produce confidence intervals (CIs) around the observed effects. Paired t test was performed to compare the mean of 14-3-3ε expression between neoplastic and matched non-neoplastic samples. The associations between clinicopathological parameters and the mean of 14-3-3ε expression were assessed using a t test for independent samples. The correlation among the 14-3-3ε mRNA and protein expression was analyzed by Pearson test. All the analyses performed in this article were based on 1000 bootstrap samples. In all analyses, the CI was 95% and P < 0.05 was considered significant. 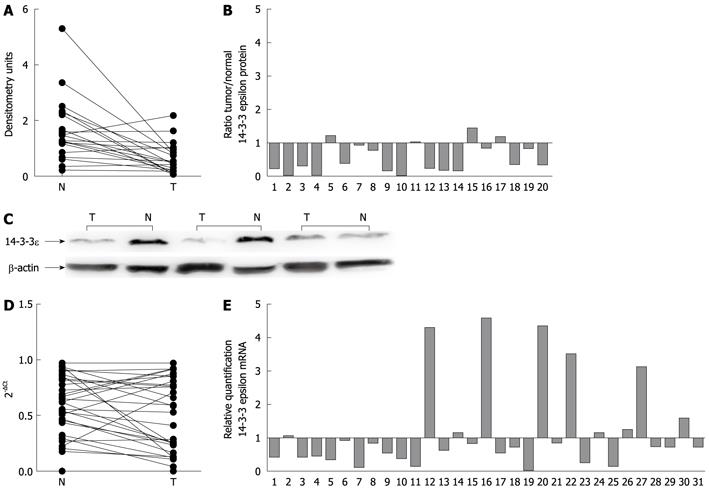 Cancer cells have defects in regulatory circuits that govern normal cell proliferation and homeostasis[32]. The 14-3-3 proteins continue to generate intense interest due to their roles in signal transduction pathways that control cell cycle checkpoints, mitogen-activate protein kinase activation, apoptosis, and regulation of gene expression. 14-3-3 stabilizes non-native conformations of bound ligands to promote their interactions with downstream targets, or facilitates their subsequent modification by kinases and phosphatases[18].

In the present study, we evaluated the 14-3-3ε mRNA and protein expression in gastric carcinogenesis. To the best of our knowledge, no study has evaluated 14-3-3ε expression in this neoplasm. Here, we observed that 14-3-3ε protein expression was reduced in GC samples compared to matched non-neoplastic gastric tissue. Low expression of 14-3-3ε has also been reported in small cell lung cancer[21], laryngeal squamous cell carcinoma[22], and medulloblastoma[23], suggesting a tumor suppressor function. The reduced 14-3-3ε expression may be in part due to the loss of its locus (17p13), which is a common finding in gastric tumors of individuals from the studied population[6].

Little is known about the role of 14-3-3ε in carcinogenesis. One of the major partners of 14-3-3ε is the CDC25 protein. CDC25 protein is virtually inactive during interphase, but undergoes a strong activation at mitosis due to phosphorylation of its N-terminal regulatory domain[33]. 14-3-3ε acts as a negative regulator of CDC25[33,34]. The overexpression of CDC25 proteins has previously been described in GC[35-37]. Thus, the reduced expression of 14-3-3ε in GC cells may enhance the ability of CDC25 to induce mitosis, contributing to the gastric carcinogenesis process.

Several classification systems have been described for GC. According to the Laurén classification, one of the most used, gastric adenocarcinoma is classified mainly into intestinal and diffuse types[28]. Intestinal-type GC progresses through a number of sequential steps, beginning with atrophic gastritis followed by intestinal metaplasia, intraepithelial neoplasia, and carcinoma[38]. In contrast, diffuse-type GC generally does not evolve from precancerous lesions[39,40]. In the present study, we observed that the expression of 14-3-3ε protein was lower in diffuse-type than in intestinal-type GC, confirming that these two histological GC subtypes follow different genetic pathways and may be two distinct entities[39].

MYC deregulation is a frequent finding in GC[41]. Moreover, MYC immunoreactivity seems to be more frequently detected in intestinal-type than diffuse-type GC[42,43]. Gene amplification is the main mechanism of MYC deregulation in GC[41], and we have previously described a higher frequency of MYC locus amplification in intestinal-type than diffuse-type GC[44,45]. Interestingly, one of the MYC target proteins is CDC25, which is negatively regulated by 14-3-3ε. A correlation between MYC and CDC25 has previously been reported in GC[46]. Here, we hypothesize that the relative increase of 14-3-3ε in the subset of tumors of the intestinal-type may be a compensatory mechanism to control the increase of cell proliferation due to MYC and CDC25 action. Moreover, MYC overexpression also induces the production of reactive oxygen species, which may lead to double-stranded DNA breaks and point mutations resulting in genomic instability[47]. Thus, the relative increase in 14-3-3ε in the intestinal-type GC may be also a compensatory response to other oncogenic mutations accumulated in cancer cells, which lead to genomic instability and initiate a DNA damage check-point in cells that contain some functional p53 alleles, as already proposed for other 14-3-3 isoforms[18].

Here, we also described a decrease in 14-3-3ε expression in early-onset compared to late-onset GC. Early-onset GC is observed in < 10% of GC patients, and only 10% of these patients have a positive family history[31]. Most young patients present at an advanced clinical stage similar to elderly patients, so the prognosis in both age groups is poor. However, early-onset GC shows different clinicopathological and molecular profiles compared to late-onset GC, suggesting that they represent a separate entity within gastric carcinogenesis, with genetic factors probably presenting a more important role in early-onset GC patients[48-50]. 14-3-3ε deregulation may have a direct or indirect function in early-onset GC because this protein interacts with several others.

In addition, no correlation was observed between 14-3-3ε mRNA and protein expression, corroborating a previous study of laryngeal squamous cell carcinoma[22]. The lack of correlation between 14-3-3ε protein and mRNA expression patterns indicates the post-translational regulation mechanism involved in this protein expression, and highlights the complexity of the relationship between protein and mRNA expression.

In conclusion, our data suggest that, for the first time, reduced 14-3-3ε may have a role in gastric carcinogenesis, mainly in diffuse-type and early-onset GC. Moreover, further investigations are necessary to understand which proteins interact with 14-3-3ε in these subtypes of GC.

Gastric cancer (GC) is the fourth most frequent cancer type and the second highest cause of cancer mortality worldwide. Although this neoplasm is a serious public health problem due to its high incidence and mortality, little is known about the molecular events involved in gastric carcinogenesis.

GC, as with other neoplasms, is a multifactorial disease that results from a combination of environmental factors and the accumulation of generalized and specific genetic and epigenetic alterations. The 14-3-3 protein family has been recently associated with carcinogenesis, but not in the stomach. In this study, the authors evaluated mRNA and protein expression of 14-3-3ε in gastric neoplasms and corresponding non-neoplastic samples.

14-3-3ε may have a role in gastric carcinogenesis as a tumor suppressor protein.

The YWHAE gene is located at 17p13.3, a region frequently deleted in gastric neoplasms. This gene encodes the 14-3-3ε protein, one of the mammalian 14-3-3 protein family members that are highly conserved in eukaryotes. This protein family is involved in several biological processes and plays a regulatory role in processes such as apoptotic cell death, mitogenic signal transduction, and cell cycle control.

The results report for the first time the expression of 14-3-3ε in GC, both at the protein and mRNA level, and the data obtained reveal reduced 14-3-3ε protein expression in GC. The data contribute to the biology of GC with possible future clinical implications to be tested in a subsequent study in a larger number of GC patients.