Gastrointestinal stromal tumors (GISTs) are rare gastrointestinal malignancies. They are rarely seen near the urinary tract. In a literature review, only one case of GIST presenting as a left adrenal tumor was reported. We report two documented cases of gastric GISTs mimicking left adrenal tumors which were successfully treated with pure laparoscopic adrenalectomy and wedge resection of the stomach by excising the tumor from the stomach with serial firing of endoscopic gastrointestinal staplers. The surgical margins were clear, and the patients recovered smoothly. No adjuvant therapy with imatinib was prescribed. During the surveillance for 9 mo and 44 mo respectively, no tumor recurrence and metastasis were documented. Laparoscopic tumor excision, when adhering to the principles of surgical oncology, seems feasible and the prognosis is favorable for such tumors.

Gastrointestinal stromal tumors (GISTs) are rare neoplasms that account for less than 1% of all GI malignancies. The stomach is the most common site of origin for GISTs, accounting for 50%-60% of these tumors[1,2]. Of these, about 12% arise from the greater curvature[1]. It may mimic an adrenal tumor if no irregular gastric contour is noted. When the tumor is detected at this location incidentally, a patient without gastrointestinal (GI) symptoms may be referred to a urologist and adrenalectomy may be conducted. However, many urologists may be unfamiliar with this disease entity and may encounter difficulty in managing these tumors intra-operatively. Herein, we reported two such cases and detail our management.

A 56-year-old female presented with microscopic hematuria found during a health examination. She did not suffer from flank pain, dysuria, epigastralgia, melena or hematemesis. Her medical history was unremarkable. Physical examination revealed no icteric sclera, flank knocking tenderness or palpable abdominal mass. Urine cytology disclosed a negative result for malignancy. Renal ultrasonography showed a left suprarenal mass. Abdominal computed tomography was performed, which showed a soft-tissue density mass 4.5 cm in diameter above the upper pole of the left kidney (Figure 1). This tumor was not enhanced with intravenous contrast and did not have calcification. Laboratory screening did not display anemia, or occult blood in stool. Endocrine examination showed normal adrenal hormonal profiles. 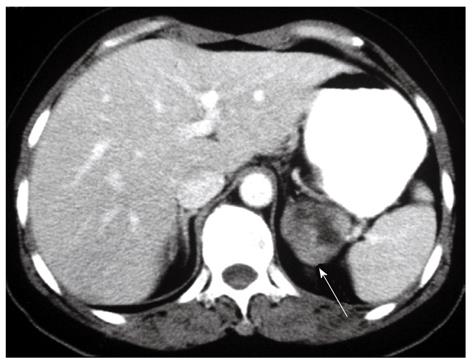 A 76-year-old man presented with dyspepsia. A firm tumor in the left epigastrium could be palpated physically. Abdominal ultrasonography showed a large tumor located at the left retroperitoneum. He had a history of peptic ulcer, but no definite tumor had been documented in a panendoscopic examination of the upper gastrointestinal tract. Abdominal computed tomography showed a soft-tissue density mass 8 cm in diameter above the upper pole of the left kidney. Neither hepatic lesions nor lymphadenopathy was found. A bone scan and laboratory screening, including all endocrine survey, were all unremarkable.

Surgical technique: The surgical procedures for these two patients were quite similar and described together as follows. With a preoperative diagnosis of a non-functional adrenal tumor (case 1), and an adrenal mass ruling out adrenal carcinoma (case 2), transperitoneal laparoscopic tumor excision was planned. During surgery the tumors were noted to be undistinguishable from the left adrenal gland; hence no effort was made to dissect the tumor from the adrenal gland. Instead, the tumor along with the whole left adrenal gland was excised en bloc, in order to adhere to the principles of surgical oncology. After the main left adrenal vein, several small adrenal arteries and veins, and other surrounding connective tissues were divided, a pedunculated tumor strongly attached to the greater curvature of the stomach was noted (Figure 2). En bloc tumor excision was accomplished with wedge resection of the attached stomach by firing 2-3 endoscopic gastrointestinal anastomosis staplers (ENDO-GIA, Tyco HealthCare, Norwalk, CT, United States) consecutively to divide the gastric attachment of the tumor from the normal part of the stomach. 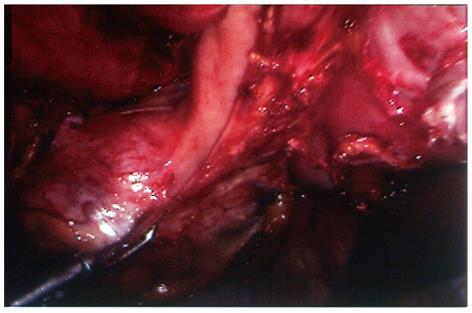 Figure 2 Intra-operative picture of a pedunculated tumor (T) originating from the greater curvature of the stomach (S).

Pathology and follow-up: The pathological examination showed a 4 cm yellowish and elastic tumor beneath the smooth gastric mucosa in patient 1, and a 7 cm yellowish-gray and soft tumor in patient 2. The mitotic counts in both cases were less than 5 mitoses per 50 high power fields. Tumor cells were immunohistochemically positive for c-kit (CD117). Hence the diagnosis of GIST was confirmed for both tumors. The surgical margins in each specimen were free of tumor in either direction. Postoperatively, there was no gastric leakage; the nasogastric tube drainage was removed 2 d later and the patients resumed intake of a soft diet in 2-3 d. No adjuvant therapy with imatinib was prescribed for either patient. Serial follow-up computed tomography during surveillance revealed no local tumor recurrence or metastasis 9 (case 1) and 44 (case 2) mo after their respective operations.

The peak age of patients diagnosed with GISTs is around 60 years in most series. In a large series (1765 cases) of gastric GISTs, 54.4% of patients presented with symptoms related to GI bleeding such as anemia, melena or hematemesis[1]. Others had upper abdominal pain (16.8%), while acute abdomen resulted from tumor rupture was very rare (1.7%)[1]. GISTs are often discovered as incidental findings during radiological imaging for unrelated conditions, or as unexpected findings in surgical resections[1].

In the medical literature only one patient with GIST presenting as an adrenal tumor was reported before[3]. In both our patients, it was difficult to differentiate these two GISTs from usual cases of nonfunctional adrenal tumors since there were no clues from their symptoms (no GI bleeding-related symptoms and normal endoscopy result) or image studies (no irregular intra-luminal contour of the stomach). Mild adhesion of the mass to the stomach might be a clue, but this phenomenon can be frequently observed if the adrenal tumor is big enough and/or the stomach is distended during the imaging studies. However, GISTs were suspected during the operation due to the severe adhesion of the mass to the greater curvature of the stomach wall, and surgery was adapted to achieve en bloc resection according to the principles of surgical oncology.

Surgical resection is the mainstay of treatment for localized gastric GISTs. It should be performed very carefully to avoid tumor rupture, which was associated with a high risk of intra-abdominal dissemination, subsequent recurrence and short overall survival[4]. In addition, complete resection of tumors is mandatory. The survival duration was similar between patients with tumor rupture and patients with incomplete surgical resections[4]. Unlike adenocarcinoma of the stomach, metastasis of GISTs to regional lymph nodes is very rare[1,5]. Routine lymphadenectomy is, hence, not indicated[6]. Several scholars had reported successful laparoscopic resection of gastric GISTs[7-9]. However, a large GIST of the stomach sometimes obscured the laparoscopic field. Yano et al[10] reported that two patients with large GISTs were successfully treated with hand-assisted laparoscopic surgery. They believed a hand-assisted procedure may offer adequate traction for the resection with sufficient surgical margins. In our patients, although the tumors were also quite large (4 cm and 7 cm in diameter) they had been completely dissected from all the other surrounding tissues except their final attachments from the greater curvature of the stomach, thus there was adequate space for manipulation and they were readily removed from the stomach with laparoscopic GIA staplers. Transperitoneally pure laparoscopic resection was hence feasible and successful in these two cases.

In conclusion, evaluation of patients with left adrenal tumors should include not only endocrine examinations but also GI workups if patients present with concurrent GI symptoms, or with hormonally inactive asymptomatic left adrenal tumors where there is no obvious demarcation between the tumor and the stomach wall in preoperative images[11]. If a GIST is suspected intra-operatively, we need to excise the tumors carefully with adequate safety margin and without causing tumor rupture. Postoperative surveillance is recommended especially in high risk patients (tumor size > 5 cm, mitoses > 5/50 high power fields).