Pancreatic fistula is a quite rare complication in patients who undergo living donor liver transplantation (LDLT). However, in the cases that show pancreatic fistula, the limited volume of the graft and the resultant inadequate liver function may complicate the management of the fistula. As a result, the pancreatic fistula may result in the death of the patient. We present 2 cases in which endoscopic treatment was effective against pancreatic fistulas that developed after LDLT. In case 1, a 61-year-old woman underwent LDLT for primary biliary cirrhosis. Because of a portal venous thrombus caused by a splenorenal shunt, the patient underwent portal vein reconstruction, and a splenorenal shunt was ligated on postoperative day (POD) 7. The main pancreatic duct was injured during the manipulation to achieve hemostasis, thereby necessitating open drainage. However, discharge of pancreatic fluid continued even after POD 300. Endoscopic naso-pancreatic drainage (ENPD) was performed, and this procedure resulted in a remarkable decrease in drain output. The refractory pancreatic fistula healed on day 40 after ENPD. In case 2, a 58-year-old man underwent LDLT for cirrhosis caused by the hepatitis C virus. When the portal vein was exposed during thrombectomy, the pancreatic head was injured, which led to the formation of a pancreatic fistula. Conservative therapy was ineffective; therefore, ENPD was performed. The pancreatic fistula healed on day 38 after ENPD. The findings in these 2 cases show that endoscopic drainage of the main pancreatic duct is a less invasive and effective treatment for pancreatic fistulas that develop after LDLT.

The incidence of complications associated with living donor liver transplantation (LDLT) is known to be greater than that associated with deceased donor liver transplantation (DDLT)[1-4]. In the patients who undergo LDLT, the incidence of complications, including mild complications, during the perioperative period can be as high as 82.8%. In particular, the rate of development of biliary complications after LDLT is twice that after DDLT[1]. Moreover, patients who undergo LDLT often have inadequate liver function because of the limited volume of the graft. Therefore, the management of complications is very difficult, and the mortality rate in critical cases is high.

Compared to other abdominal surgery, pancreatic fistula is a quite rare complication after LDLT[1-5], but it is theoretically possible because LDLT involves surgery in the area surrounding the portal vein, the pancreas, and the spleen. Pancreatic fistula causes hemorrhage, abscess, etc., and may result in the death of the patient[6-8]. Only 1 previous study has reported 2 cases of leakage of pancreatic fluid after liver transplantation. In those cases, leakage of a mixture of pancreatic fluid and bile was observed at the anastomosis site of the bile duct after DDLT[9]. However, there is no clear consensus on the management of pancreatic fistula after liver transplantation. Generally, conservative therapy is the first line of treatment, and surgery is performed only when the patient does not respond to conservative therapy[6-8]. Recently, however, endoscopic treatment has attracted more attention because it is less invasive than surgical treatment. We present 2 cases in which endoscopic treatment was effective against refractory pancreatic fistulas that developed after LDLT.

A 61-year-old woman underwent LDLT for primary biliary cirrhosis; the graft was obtained from the left liver lobe of her son. Abdominal computed tomography (CT) performed on postoperative day (POD) 7 revealed a portal vein thrombus; therefore, urgent exploratory laparotomy was performed. The thrombus was believed to have been induced by reduced portal blood flow, which was caused by splenorenal steal by an artificial shunt. After removing the thrombus, portal vein reconstruction was performed by using the right external iliac vein, and this procedure was followed by splenectomy. To increase the portal blood flow, a splenorenal shunt was ligated. The main pancreatic duct on the dorsal side of the pancreas was injured at the time of hemostatic manipulation; however, this injury was not identified immediately. CT performed on POD 13 revealed a hematoma at the lower edge of the pancreas. CT on POD 21 revealed that the hematoma under the pancreas had decreased in size (Figure 1). The amylase level of the drainage fluid was 22 690 IU/L; therefore, the hematoma at the inferior edge of the pancreas was considered to have ruptured because of a pancreatic leak. Another CT examination revealed fluid collection in the mesentery on the ventral side of the upper pole of the left kidney; therefore, open drainage was performed. To this end, a drain was placed at the tail of the pancreas and administration of octreotide was started. However, the leakage of pancreatic fluid from the drain did not stop. After several days, the patient’s general status stabilized, but surgical treatment for pancreatic fistula was still unsafe because of inadequate liver function. Therefore, the patient was discharged on POD 128 with the drain in place and was followed up. The patient was in a stable state at discharge. However, on POD 318, she was readmitted to our department because of fever. Examinations revealed that the drain at the tail of the pancreas had deviated and that the patient had developed liver necrosis, supposedly because of contact with the drain. On POD 320, we repositioned the drain by using a fluoroscope. A contrast test performed at that time revealed that the main pancreatic duct was completely disrupted (Figure 2). The patient was diagnosed with refractory pancreatic fistula, and an endoscopic naso-pancreatic drainage (ENPD) tube was inserted to the proximal side of the leakage on POD 331 (Figure 3); this procedure resulted in a remarkable decrease in drain output (Figures 4 and 5). The ENPD tube was removed on POD 368, and the drains at the tail of the pancreas were removed on POD 371. The patient was discharged on POD 375 without abnormal fluid collection around the pancreas (Figure 6). The patient is well without the recurrence of pancreatic fistula up to this time.

Figure 1 Computed tomography performed on postoperative day 13 showing fluid collection (circle) at the lower edge of the pancreas. The hematoma was considered to be ruptured.

Figure 2 Pancreatographic examination of the drain at the tail of the pancreas (Drain) in case 1 reveals the disrupted (arrow) main pancreatic duct with flow of contrast into the duodenum. MPD: Main pancreatic duct. 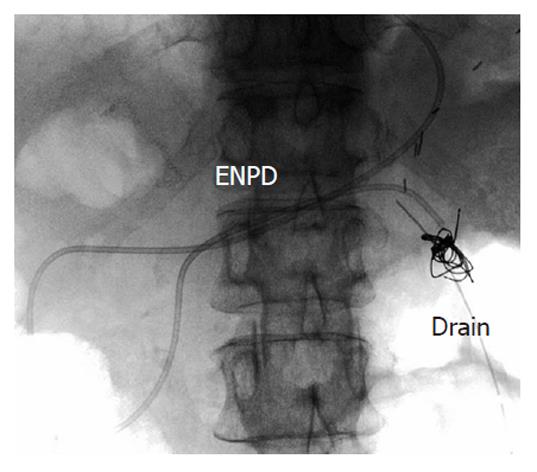 Figure 4 Upper chart shows the body temperature and serum C-reactive protein level. Lower one shows daily output of the endoscopic naso-pancreatic drainage tube and the drain at the tail of the pancreas (Tail) in case 1. The patient had an episode of fever caused by the occlusion of the endoscopic naso-pancreatic drainage (ENPD) tube. After the tube was replaced, the pancreatic fistula healed completely. BT: Body temperature; CRP: C-reactive protein; POD: Postoperative day. 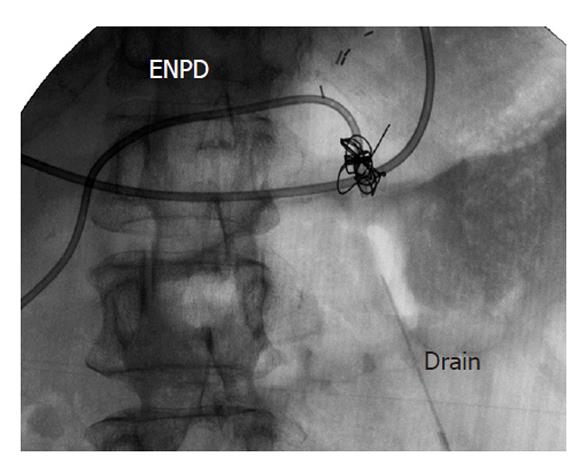 Figure 5 Contrast examination from the drain at the tail of the pancreas (Drain) in case 1 on postoperative day 363 reveals the closure of fistula. ENPD: Endoscopic naso-pancreatic drainage. 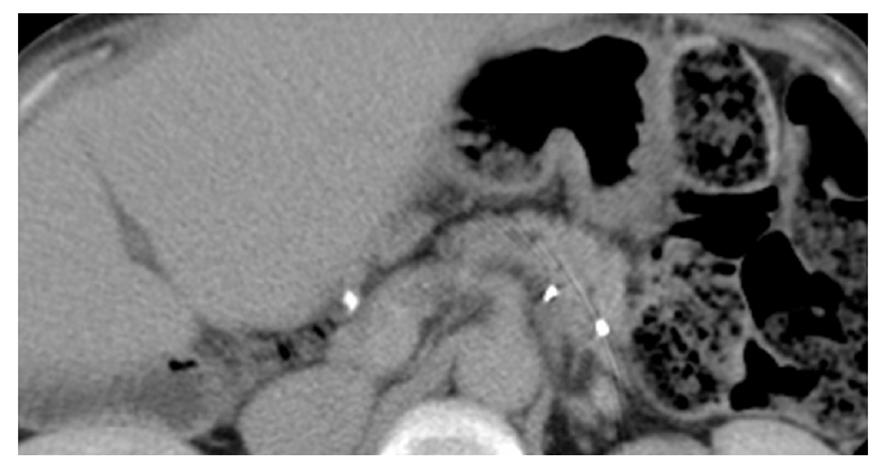 Figure 6 Computed tomography performed 2 d after removal of the drain in case 1 showing no fluid collection around the pancreas.
Case 2

A 58-year-old man underwent LDLT for cirrhosis C; the graft was obtained from the right liver lobe of his daughter. Because the portal vein was occluded by a thrombus, the portal and splenic veins were stripped off from the surrounding tissue and were exposed in order to remove the thrombus. However, the upper edge of the pancreatic head was injured during this process. The amylase level measured at the upper edge of the pancreatic drain was high on POD 1; therefore, the patient received octreotide on POD 2. On POD 5, the patient showed high fever and acute peritonitis. Therefore, an emergency exploratory laparotomy was performed. Because fluid collection was observed around the pancreas, drains were placed at both the right and left edges of the pancreas. On POD 21, the total output from the drain was 460 mL/d, and the amylase level of the drainage fluid was 166 700 IU/L. The patient was diagnosed with high-output pancreatic fistula, and ENPD was performed on POD 22 (Figure 7). The drain output decreased very rapidly (Figure 8); therefore, the patient was allowed to consume solid foods on POD 49, and octreotide administration was stopped on POD 50. The ENPD tube was removed on POD 65, and the drains placed at the right and left edges of the pancreas were removed on POD 68 and POD 70, respectively. The patient was discharged on POD 100 without abnormal fluid collection around the pancreas (Figure 9). The patient is well and receiving regular out-patient treatment and is showing no recurrence of pancreatic fistula. 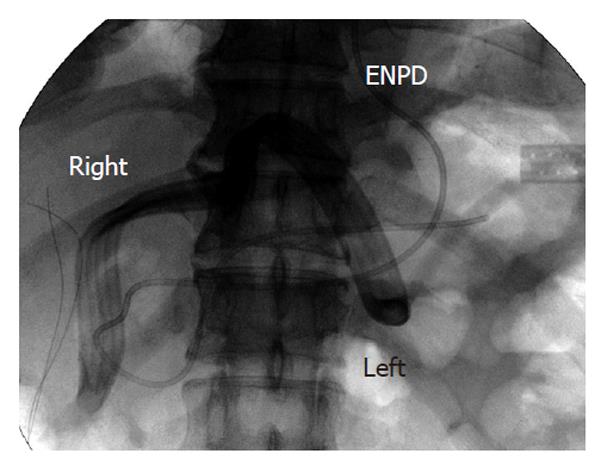 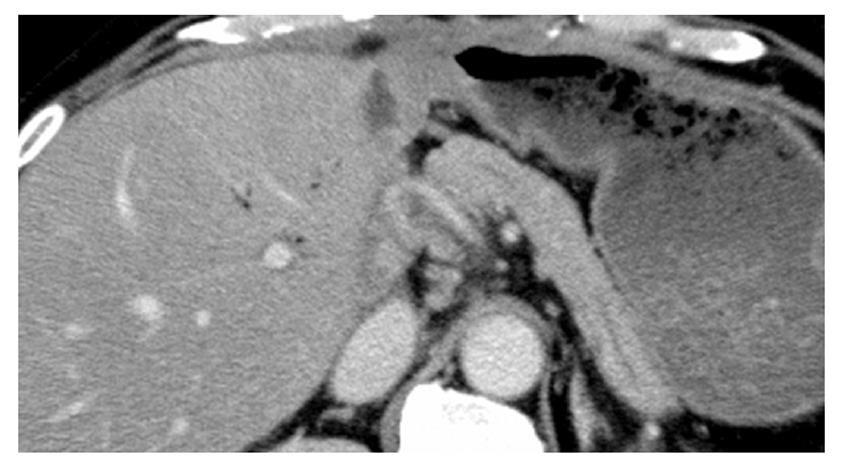 Figure 9 Computed tomography performed 14 d after removal of the drains in case 2 showing no fluid collection around the pancreas.
DISCUSSION