METHODS: Seventy-seven patients with documented LAM resistance who were treated with 10 mg/d ADV for > 96 wk were analyzed for ADV resistance.

CONCLUSION: Development of ADV resistance mutations was associated with HBV DNA levels, which could identify patients with LAM resistance who are likely to respond to ADV monotherapy.

Lamivudine (LAM) has been the most popular antiviral agent for the treatment of chronic hepatitis B for many years, but its efficacy is hampered by the high incidence of drug resistance[1]. Adefovir dipivoxil (ADV) is a nucleotide analog that exhibits activity against wild-type and LAM-resistant hepatitis B virus (HBV)[2-4]. Early studies have demonstrated potent viral suppression of LAM-resistant HBV by either switching to or adding ADV to LAM[5]. However, ADV-resistant strains have been reported after either switching to or adding ADV in patients with LAM resistance, and several recent clinical studies have found that combined LAM with ADV is associated with improvements in virological response and lower rates of ADV resistance than sequential ADV monotherapy[6-8]. Thus, recent guidelines suggest adding ADV to LAM as a better approach than sequential monotherapy for patients with LAM resistance[9-12].

Although ADV add-on therapy represents a new paradigm that is highly effective at restoring viral suppression and preventing the emergence of resistance in patients with LAM resistance[13], the higher cost of add-on therapy may allow ADV monotherapy to retain its role in selected patients, particularly in developing countries[14]. In clinical practice, some patients with LAM resistance do respond to ADV monotherapy[15]. Identification of patients who may be sufficiently treated with ADV monotherapy alone may reduce medical costs in areas where resources are limited.

Data were collected retrospectively from 85 LAM-resistant chronic hepatitis B patients who started ADV monotherapy between March 2004 and May 2006, and maintained ADV monotherapy for at least 96 wk at the Samsung Medical Center, Seoul, Korea. All 85 patients were treated with LAM for chronic HBV infection and experienced virological breakthrough (VB), which was defined as an increase in the level of HBV DNA of at least 1 log10 IU/mL from the lowest point during treatment. Serum samples were collected every 3 mo during treatment and kept at -80°C until mutation analyses were performed. Eight patients were excluded from analyses for the following reasons: (1) serum samples were not available for six patients; and (2) an ADV-resistant strain (rtA181V/T) was present at baseline in two patients. Finally, a total of 77 patients were included in this study. This study was approved by the Institutional Review Board at Samsung Medical Center.

HBV DNA levels on treatment and emergence of ADV resistance 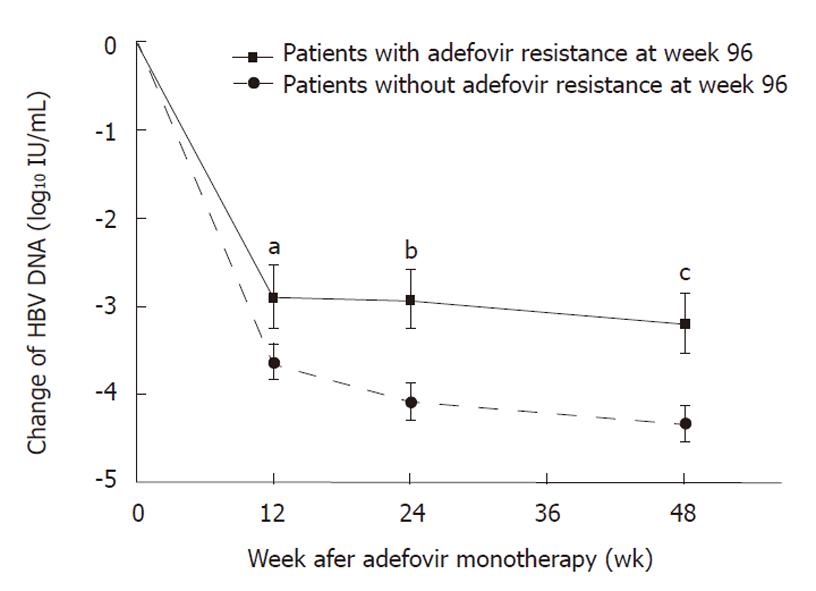 Figure 1 Hepatitis B virus DNA levels after adefovir monotherapy. There were significant differences in the degree of Hepatitis B virus (HBV) DNA reduction between patients who developed adefovir resistance and those who did not (P value; aweek 12 = 0.027, bweek 24 = 0.002, cweek 48 = 0.002).

The findings of this study are in line with the recently proposed “on-treatment strategy” for patients receiving oral nucleoside/nucleotide therapy[13]. Keeffe et al[13] have suggested that management strategies should be changed for patients with IVR response at week 24. Shin et al[19] also have described the importance of HBV DNA levels on treatment among patients with LAM resistance who received ADV monotherapy. They have reported that patients who had HBV DNA levels < 200 IU/mL at week 48 were unlikely to develop VB and genotype mutations. Chen et al[20] have reported that ADV resistance was associated with higher HBV DNA levels and lower HBV DNA reduction during the first 6 mo of ADV treatment, compared to patients who did not develop ADV resistance. Gallego et al[21] also have shown that initial virological response (reduction ≥ 4 log10 IU/mL) in HBV DNA at 6 mo is an important factor for predicting treatment outcome. These studies, as well as the present study, suggest that HBV DNA level during treatment is a valuable parameter for making early decisions regarding the continuation of ADV monotherapy or switching to another therapy in patients who show LAM resistance[19].

In conclusion, the results of this study demonstrate the importance of HBV DNA levels during treatment as an indicator of future ADV resistance. The development of ADV-resistant mutations was closely associated with HBV DNA levels during therapy. The risk of developing ADV-resistant mutations in patients who experienced IVR at week 24 was high. These findings suggest that ADV monotherapy is a viable alternative for LAM-resistant patients with good on-treatment virological response, in areas with limited resources.

A major concern with adefovir (ADV) treatment in lamivudine (LAM)-resistant patients is the selection of ADV-resistant mutations.

Recent studies suggest that combination therapy with ADV and LAM is better than ADV monotherapy in preventing development of ADV resistance among LAM-experienced patients. However cost is of concern, in areas with limited resources.

Recent reports have highlighted the importance of hepatitis B virus (HBV) DNA levels during antiviral therapy. On-treatment monitoring strategies are based on the nature of virological response during treatment. This study showed that HBV DNA levels during treatment were also useful in predicting ADV resistance in LAM-resistant patients, thus helps to identify patients that might respond to ADV monotherapy.

This study suggests that ADV monotherapy could be a viable alternative for LAM-resistant patients with good on-treatment virological response to ADV. ADV monotherapy may still be alternative, cost-effective approach especially in areas with limited resources.

Genotypic resistance refers to the detection of mutations that have been shown in in vitro studies to confer resistance to the drug that is being administered. Antiviral-resistant mutations can be detected at months and sometimes years before biochemical breakthrough. Thus, early detection and intervention can prevent hepatitis flares and hepatic decompensation.

This is a retrospective study that evaluated the virological response to ADV monotherapy. This was a good study.