AIM: To investigate the survival rates and prognostic factors in patients with hepatitis B virus-related acute-on-chronic liver failure (HBV-ACLF).

METHODS: Clinical data in hospitalized patients with HBV-ACLF admitted from 2006 to 2009 were retrospectively analyzed. Their general conditions and survival were analyzed by survival analysis and Cox regression analysis.

CONCLUSION: Antiviral therapy has a strong effect on the prognosis of the patients with HBV-ACLF by improving their 1-year survival rate. HRS, electrolyte disturbances, and HE also affect patient survival.

Hepatitis B virus (HBV) infection is an established cause of liver-related morbidity and mortality, and has been described as a global public health problem. Some patients had abnormal liver functions or even liver failure during the lengthy course of chronic HBV infection[1]. Liver failure is characterized by severe deterioration in liver function. This clinical syndrome involves the development of hepatic encephalopathy (HE), jaundice, coagulopathy, and hepatorenal syndrome (HRS). Acute-on-chronic liver failure (ACLF) refers to acute deterioration in liver function in a patient with previously well-compensated chronic liver disease, as a result of a precipitating event such as sepsis or upper gastrointestinal bleeding. HBV infection is the most common cause of ACLF in China[2,3]. If the relevant prognostic factors for HBV-related ACLF could be clarified in the course of chronic hepatitis B, corresponding measures could be adopted to reduce the associated mortality.

One hundred and ninety patients admitted to the 302 Military Hospital from September 2006 to January 2009 and diagnosed with HBV-ACLF were included in this retrospective study. Exclusion criteria included concurrent viral infections (e.g. HAV, HCV, HDV, HEV, human immunodeficiency virus, cytomegalovirus, Epstein-Barr virus); liver failure by other causes (including autoimmune, alcohol- or drug-related diseases); malignant tumors; and patients with other severe systematic or mental diseases. The research protocol was approved by the Ethics Committee of the 302 Military Hospital.

HBV-ACLF was defined as acute hepatic insult manifesting as jaundice and coagulopathy, complicated within 4 wk with ascites and/or HE in a patient with previously diagnosed or undiagnosed chronic hepatitis B, which includes compensated liver cirrhosis, with total bilirubin ≥ 171 μmol/L or an increase ≥ 17.1 μmol/L, and prothrombin activity (PTA) ≤ 40%[4].

The diagnosis of liver cirrhosis was based on medical history, physical examination, biochemical parameters, ultrasound findings and/or liver biopsy. The diagnostic criteria included the presence of hepatic stigmata, spider angioma or splenomegaly on physical examination, together with laboratory abnormalities (e.g. low serum albumin, high serum globulin, high serum γ-globulin, low platelet count) and esophagogastroduodenal endoscopic signs of portal hypertension. The occurrence of liver cirrhosis during follow-up was also defined by ultrasonographic features suggestive of cirrhosis, based on a quantitative scoring system derived from the appearance of the liver margins, parenchymal echotexture, portal vein caliber, and spleen diameter[5,6], supplemented with the presence of esophageal varices or ascites.

HRS is a potentially reversible syndrome that occurs in patients with cirrhosis, ascites, and liver failure. It is diagnosed by presence of cirrhosis with ascites; absence of shock; serum creatinine > 133 mmol/L (1.5 mg/dL); no improvement in serum creatinine (decrease to a level of ≤ 133 mmol/L) at least 2 d after diuretic withdrawal and volume expansion with albumin, and no current or recent treatment with nephrotoxic drugs; absence of parenchymal kidney disease as indicated by proteinuria > 500 mg/d; microhematuria (> 50 red blood cells per high-power field); and/or abnormal renal ultrasonography[8].

Follow-up of patients to monitor mortality

Statistical analyses were performed using SPSS software version 13.0 (SPSS Inc., Chicago, IL, USA). Patients’ clinical and biochemical indices were expressed as mean ± SD. Analysis of variance was used for comparisons between different treatment groups, and significant differences were assessed using F-tests and Student-Newman-Keuls tests. χ2 tests were used for comparisons between the rates of liver cirrhosis, complications, and sex. The Kaplan-Meier method was used to estimate the overall survival rates. The log-rank test was used to compare the death rate between groups.

The clinical and biochemical characteristics of the 190 patients (159 men and 31 women, mean ± SD age, 45.7 ± 11.1 years) with HBV-ACLF are presented in Table 1. Of the 190 patients, 141 had received antiviral therapy (nucleoside analogues: lamivudine 100 mg/d or entecavir 0.5 mg/d), and 11 patients had undergone liver transplantation. There were no significant differences in clinical or biochemical characteristics among the three patients who received entecavir, lamivudine, or no antiviral treatment). One hundred and twenty patients had liver cirrhosis (Child-Turcotte-Pugh score < 7), 64 had HE, 16 had HRS, 63 had spontaneous peritonitis (SBP), and 144 had electrolyte disturbances. The overall 12-mo survival rate was 57.6%.

Survival analysis of patients taking and not taking antiviral drugs 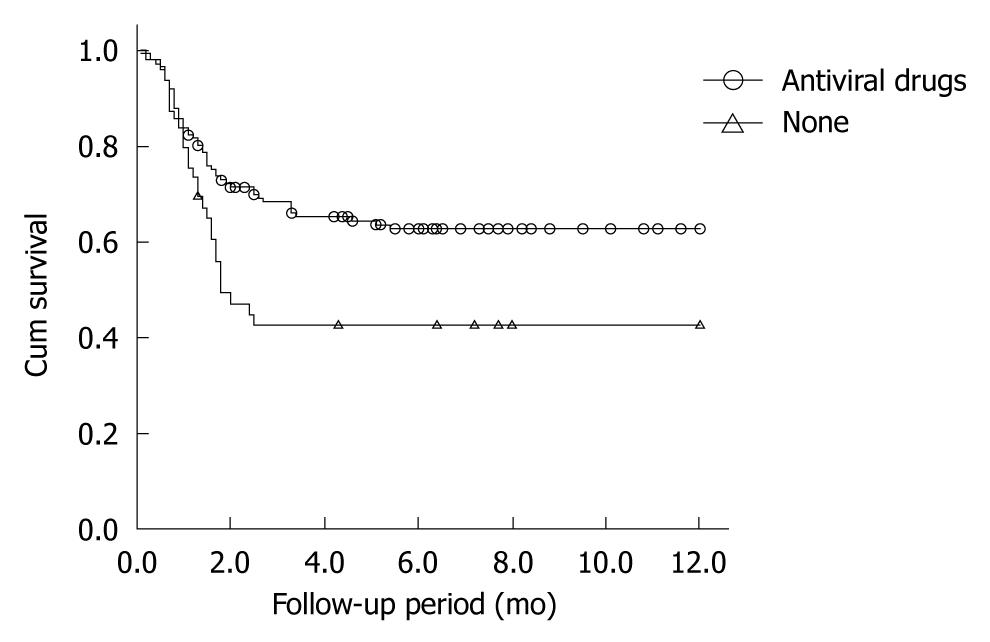 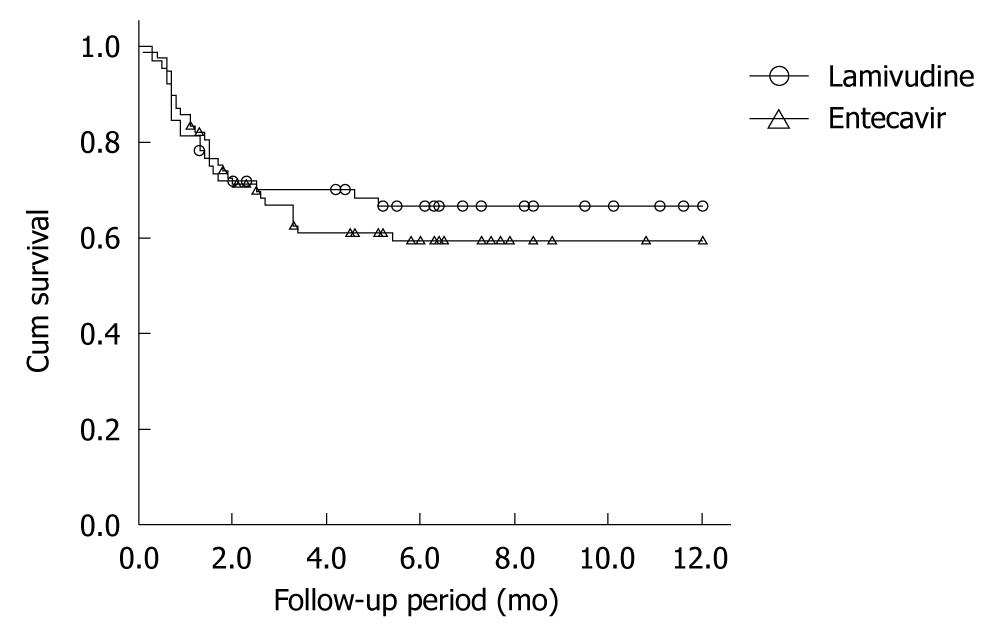 Univariate analysis identified eight factors significantly associated with long-term patient survival: age, cirrhosis, electrolyte disturbances, HE, SBP, HRS, PTA, and the use of antiviral drugs (Table 2). However, the levels of HBV DNA before treatment and model for end-stage liver disease (MELD) score had no significant effects on the survival rate, and were not significantly different among the three groups (P = 0.383 and P = 0.053).

Forward Cox regression analysis identified antiviral therapy, HRS, HE, and electrolyte disturbances to be independently associated with the mortality (Table 3).

In addition to antiviral therapy, other factors were found to significantly influence the prognosis, including HE, electrolyte imbalance, and HRS. Methods for treating and preventing the complications of HBV-ACLF remain important research topics. Yu et al[19] found that, in HBV-ACLF patients treated with lamivudine and plasma exchange, multivariate analysis identified a MELD score of 30-40 or > 40 to be a good predictor of treatment outcome. The present study, however, found no significant effect of MELD score on prognosis. However, the P value of 0.053 suggests that a MELD score > 30 might predict a poorer prognosis in patients with HBV-ACLF if a larger sample size was analyzed. Thus, although pretreatment HBV DNA levels and MELD score had no significant effects on patient survival in this study, further studies using larger samples, or multicenter trials, are required to confirm these results.

HBV-ACLF, although rare, remains a rapidly progressive and frequently fatal condition. Traditional treatment is generally supportive, and HE, HRS and electrolyte disturbances remain the leading causes of death. In China, liver injury is caused mostly by hepaciviruses (especially HBV)[20] and may therefore be preventable. Clinicians should be aware of the rapid evolution of liver failure, and the possible risks for patients who develop any degree of coagulopathy and encephalopathy. Because the outcome is unpredictable, early transfer to a transplantation facility should be considered before the onset of advanced grades of coma, after which transfer becomes impossible. Further understanding of the pathophysiologic characteristics of this multisystemic condition and the development of better supportive therapies should improve the outcome of patients with HBV-ACLF.

Hepatitis B virus related acute-on-chronic liver failure (HBV-ACLF) is associated with a high mortality, although liver transplantation can significantly improve the survival rate. However, liver transplantation is limited by many factors, especially donor shortages. Improved medical treatment is the key to prolonging the survival of patients with HBV-ACLF. If the related prognostic factors are clarified in the course of HBV-ACLF, corresponding measures can be taken to reduce the mortality.

Although antiviral therapy using lamivudine or entecavir have shown promising results in chronic hepatitis B and liver cirrhosis, the effects of antiviral treatment with nucleoside analogs on hepatitis B related liver failure remains controversial. And it has become currently a focus of clinical research.

The present study demonstrates that antiviral therapy had a strong effect on the prognosis of patients with HBV-ACLF by improving their 1-year survival rate. Hepatorenal syndrome, electrolyte disturbances, and hepatic encephalopathy also affected patient survival.

The results of study indicate that antiviral therapy and preventing complications [especially hepatic encephalopathy (HE), hepatorenal syndrome and electrolyte disturbances] may serve as a favorable alternative to reduce the mortality of the patients with HBV-ACLF.

HBV-ACLF is defined as acute hepatic insult manifesting as jaundice and coagulopathy, complicated by ascites and/or HE in a patient with previously diagnosed or undiagnosed chronic hepatitis B, which includes compensated liver cirrhosis, with total bilirubin (TBiL) ≥ 171 μmol/L or an increase in TBiL ≥ 17.1 μmol/L, and prothrombin activity ≤ 40%.

The definition of ACLF should be clarified in no uncertain terms so that it is clear to the reader of the article. Language also needs to be taken care of.