A 51-year-old Chinese male was referred to our hospital with a 2-mo history of mild abdominal pain, an abdominal mass in the upper quadrant, fatigue and progressive weight loss. His symptoms gradually worsened with fatigue 1 wk after onset of the disease. He had no fever, cough or skin lesions in the past 2 mo and no family history of liver and autoimmune diseases. Physical examination revealed mild pale conjunctiva and skin, and enlargement of the liver without percussion pain. 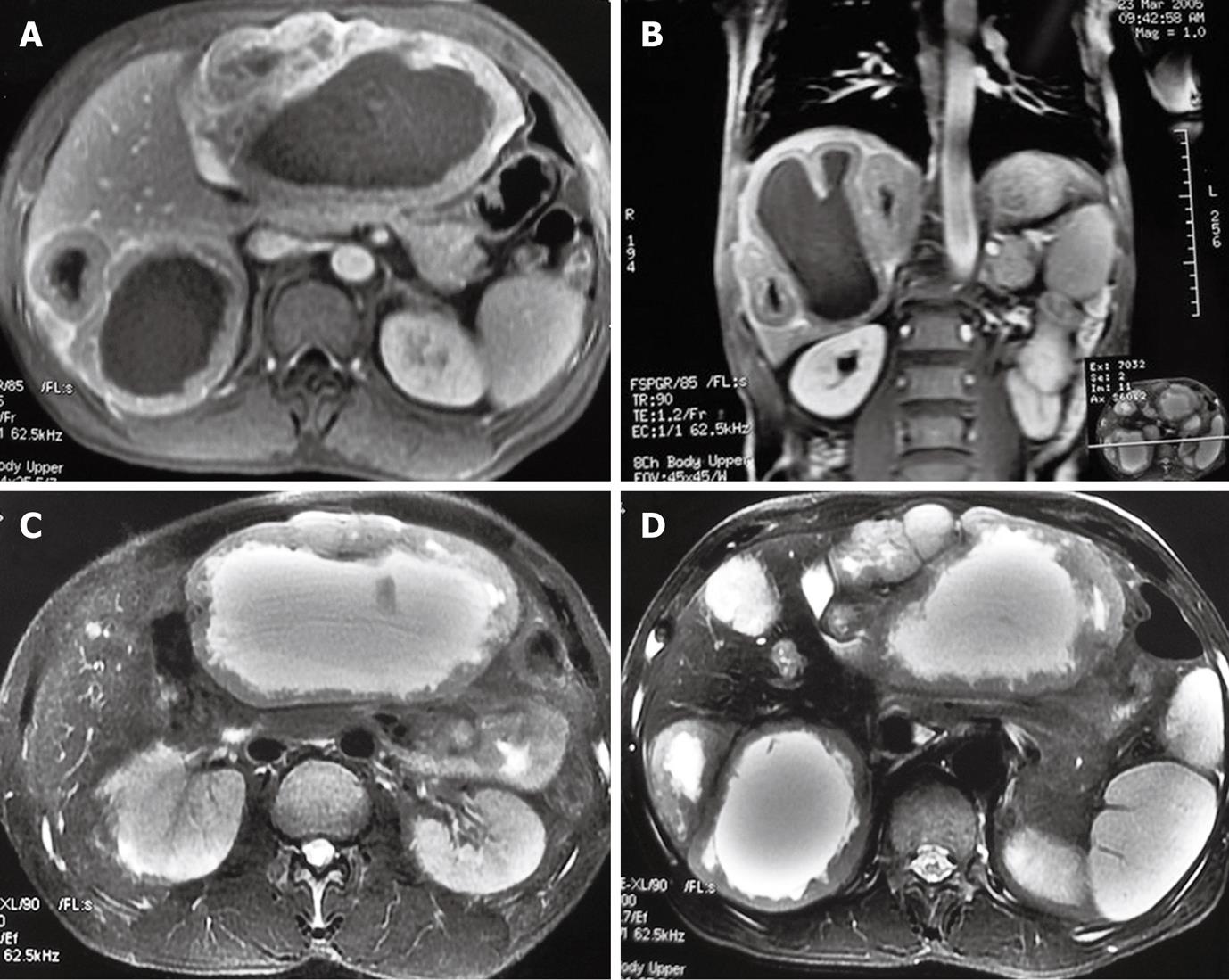 PLB was performed under ultrasonography (US) guidance using a Bard biopsy gun (18-gauge cut needle) to make a final diagnosis of the lesions in liver. During biopsy, bloody liquid was observed in the lesion. Microscopic examination confirmed that the bloody liquid contained a large number of erythrocytes. However, pathology of the liver only showed a spindle cell tumor. The possible reasons are as follows. First, the liver specimen was too small because the lesion contained only fluid and was surrounded by a very thin wall. Second, the location of tumor and its hardness limited the adjustable puncture angle.

To confirm the diagnosis of this patient, another unconventional liver biopsy was performed with gastroscopic biopsy forceps as follows.

At beginning of the procedure, a local anesthetic agent (5% lidocaine) was injected subcutaneously through a 25-gauge needle. Next, a 15 cm long 18 gauge puncture needle was passed into the cyst under US guidance. After the local skin and subcutaneous tissue were dilated, a PTC exchange stainless steel guide wire with a flexible tip was introduced into the cyst cavity through the needle, and then the needle was withdrawn. A 5-French catheter was plated into the cyst using the Seldinger technique. Finally, gastroscopic biopsy forceps was passed into the cyst through the catheter to get the liver tissue sample. The histological results indicated that spindle-shaped tumor cells were well-oriented, arranged in bundles and clustered in some part of the regional tumor. Nuclei with rare mitosis were elongated in a rod-like shape with different sizes and blunt ends. The final diagnosis was established as a low grade malignant liver mesenchymal tumor (Figure 2). 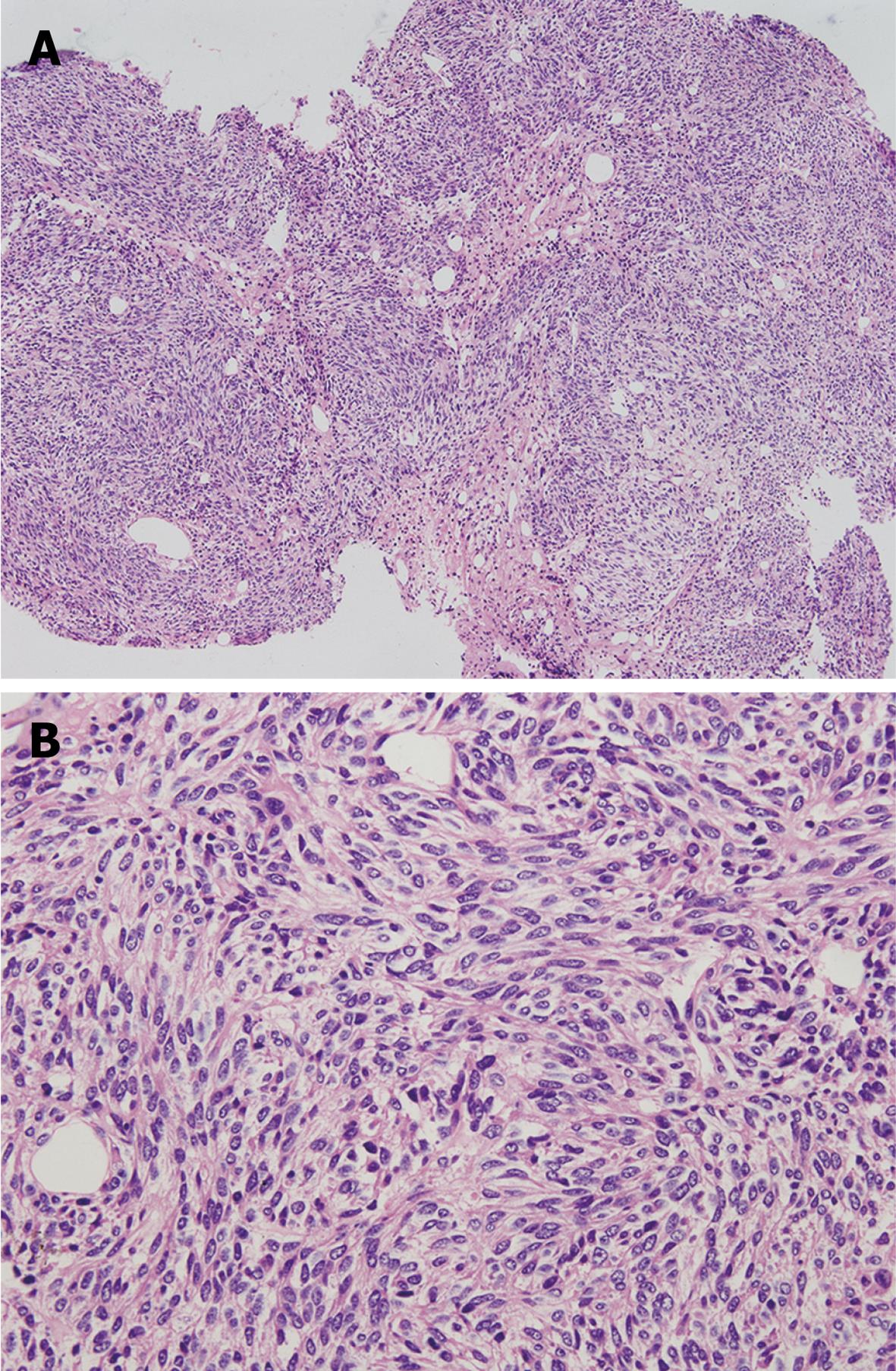 Figure 2 Hematoxylin and eosin staining showing a low grade malignant liver mesenchymal tumor under the magnification × 10 (A) and × 40 (B).

The patient was suggested to receive hepatic arterial chemoembolization. Selective digital subtraction angiography in the early and later phases showed lesions surrounded by abnormal tortuous tumor arteries (Figure 3A) and patchy enhancement (Figure 3B), respectively, in different areas. Then, 5-Fu (750 mg), mitomycin (5 mg), pyrazine imidacloprid Star (30 mg), and super-liquid iodized oil (5 mL) were infused into the tumor arteries. After treatment, liver function of the patient was improved and his hemoglobin level increased (Table 1). The patient died 2 years after treatment. 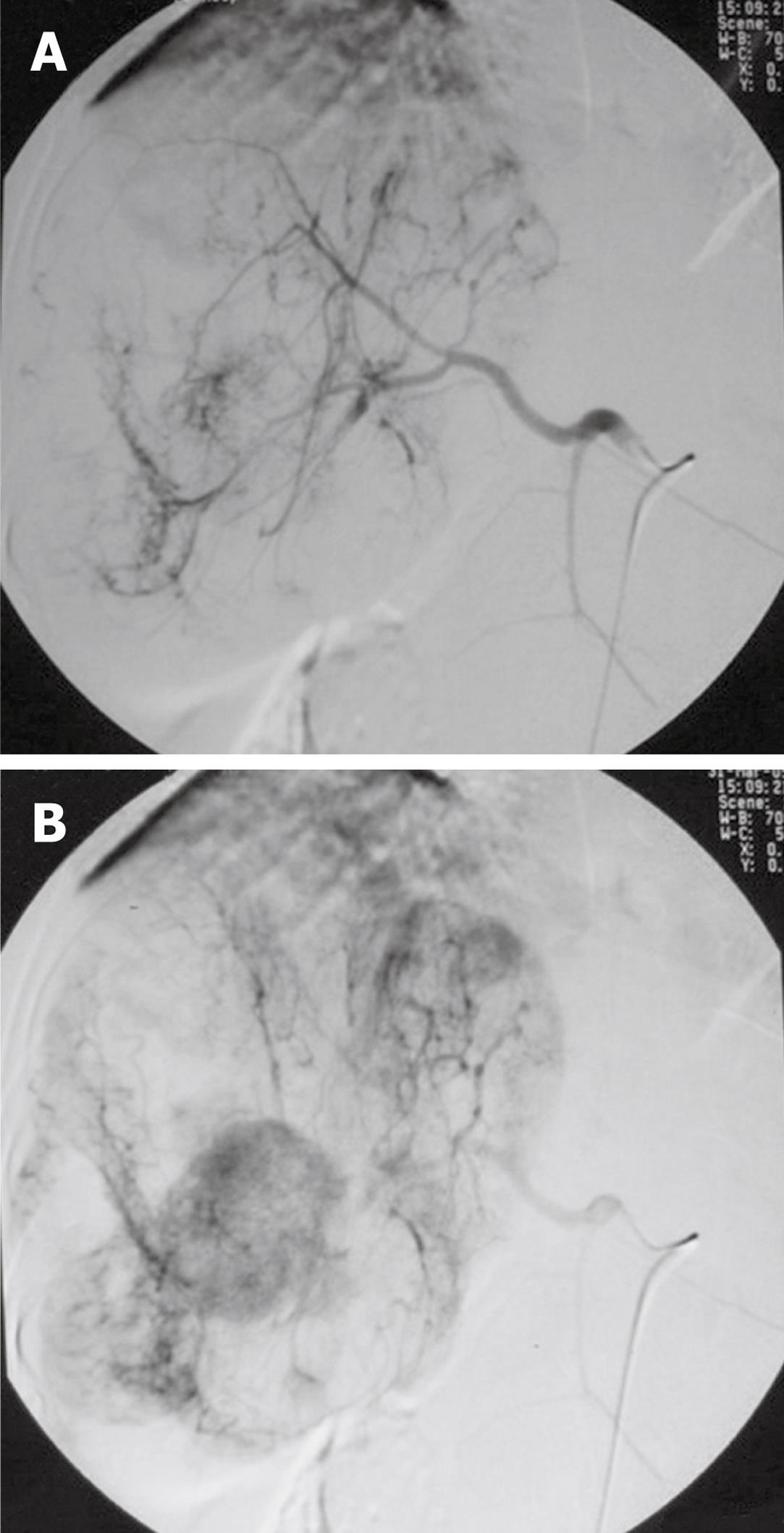 Unfortunately, it is difficult to make the diagnosis of malignant liver mesenchymal tumor because both its clinical presentation and imagine are nonspecific.

The common symptoms and signs of patients with malignant liver mesenchymal tumor include abdominal pain, weight loss, weakness, loss of appetite, vomiting, enlargement of the liver, ascites, and jaundice, which lack of specificity in differential diagnosis between benign and malignant mesenchymal tumors.

Furthermore, imaging studies, such as MRI scan, computed tomography (CT) scan and angio photography are the commonly used methods to identify the characteristics of liver tumor. However, imaging findings of liver mesenchymal tumors, including leiomyosarcoma and schwannoma, are nonspecific and infrequently reported[13-19]. It is quite difficult for MRI and CT scan to differentiate primary liver mesenchymal neoplasms from other liver malignancies, although they should be included in differential diagnosis when MRI or CT scan demonstrates hepatic lesions without characteristics of hepatocellular carcinoma, especially in patients with no extrahepatic primary malignancies.

The diagnosis of malignant liver mesenchymal tumor depends on histological change in either needle or open biopsy, while metastatic status is facilitated by the presence of extrahepatic primary tumor.

Liver biopsy is an important diagnostic tool and helps make therapeutic decision for liver tumor. Open biopsy is a major surgical procedure for liver tumor. PLB under ultrasound or CT guidance is a safe and almost painless procedure for lesions with a soft tissue component or located close to vital structures[20]. Most reported cases of cystic liver mesenchymal tumor were diagnosed by open liver biopsy. In this case, uncommon PLB method was used instead of the routine PLB to make the final diagnosis, avoiding injury and complications of open biopsy. Minimally invasive treatment devices, such as gastroscopic biopsy forceps and catheters used in liver cancer intervention, make the new PLB method possible, which is safe and reliable and can thus be used in diagnosis of cystic liver lesions.

In conclusion, mesenchymal liver tumor is rare in adults and cross-sectional findings are varied, which can be diagnosed with the uncommon PLB method.