CONCLUSION: Although IgE does not necessarily reflect the disease activity, IgE might be useful for the diagnosis of AIP in an inactive stage.

Autoimmune pancreatitis (AIP) is a unique, benign pancreatic disease characterized by irregular narrowing of the pancreatic duct, swelling of the pancreas, lymphoplasmacytic infiltration and fibrosis, and favorable response to steroid therapy[1-8]. Serologically, elevation of IgG and IgG4 is the most remarkable characteristic in this disease[9-12]. A recent study showed that IgM and IgA were decreased in AIP[13]. There has been no detailed clinical analysis of IgE, although some clinicians have noted elevated serum IgE in AIP or IgG4-related diseases[14-17].

Between 1997 and 2009, 67 patients were diagnosed as having AIP at the University of Tokyo hospital and affiliated hospitals. All the patients fulfilled the diagnostic criteria of AIP proposed by the Mayo Clinic[3] or the revised criteria by the Japan Pancreas Society[4]. Serum IgE was measured in 48 patients before steroid treatment. As the method of measurement was different in six patients, these patients were excluded. Thus, 42 patients whose IgE level was measured by the same method before steroid treatment were enrolled in this study. Of the 42 patients, 33 were men and nine were women. The mean age of onset was 65 years old. Thirty-seven patients received steroid treatment. Prednisolone at an initial dose of 30-40 mg/d was administered for 2-4 wk in most cases. It was then tapered by 5 mg every 2-6 wk until 10 mg/d, and 2.5-7.5 mg/d was continued as maintenance therapy in principle.

This retrospective study was approved by the review board of our institute.

Serum IgE was measured by fluorescence enzyme immunoassay. To evaluate the relationship between IgE levels and disease activity, we examined (1) frequency of high IgE (> 170 IU/mL) and concomitant allergic diseases requiring treatment; (2) correlations among IgG, IgG4, and IgE; (3) relationship between the presence of extrapancreatic lesions and IgE; (4) relationship between clinical relapse and IgE in patients treated with steroids; and (5) transition of IgE before and after steroid treatment.

With regard to allergic diseases, only diseases that required treatment during follow-up were counted. There are many extrapancreatic lesions in AIP; however, in this study, only representative and definite lesions, including sclerosing cholangitis[7,8,24], retroperitoneal fibrosis[8,25], sclerosing sialadenitis[17], interstitial pneumonia[26], and tubulointerstitial nephritis[27] were counted. With regard to the number of extrapancreatic lesions, we used the number of extrapancreatic lesions that were observed when IgE was measured. We do not regard intrapancreatic biliary stricture as an extrapancreatic lesion, because it is influenced by pancreatic edema[24]. We defined “clinical relapse” as AIP-related symptomatic unfavorable events; i.e. obstructive jaundice from distal bile duct stenosis due to exacerbated pancreatitis with pancreatic swelling, increased levels of biliary enzymes caused by sclerosing cholangitis (in which extrapancreatic biliary strictures were confirmed on imaging findings), retroperitoneal fibrosis, interstitial pneumonia, and interstitial nephritis (for which simple observation seemed very inadequate and remission induction therapy was introduced). Concerning clinical relapses and IgE, we analyzed patients whose follow-up after the initiation of steroid treatment was more than 6 mo. With regard to the transition of IgE, IgE measured before steroid treatment and during maintenance steroid treatment (2.5-7.5 mg prednisolone/d) were compared.

Categorical variables were compared by the χ2 or Fisher exact test, where appropriate. Continuous variables were reported as mean ± SD and compared by the Student t test, Welch t test, or paired t test, where appropriate. A P value of < 0.05 was considered statistically significant. Statistical analyses were performed by the statistical software JMP 7.0.1 (SAS Institute Inc., Cary, NC, USA).

Correlations between IgG, IgG4, and IgE

Relationship between the presence of extrapancreatic lesions and IgE

Transition of IgE before and after steroid treatment 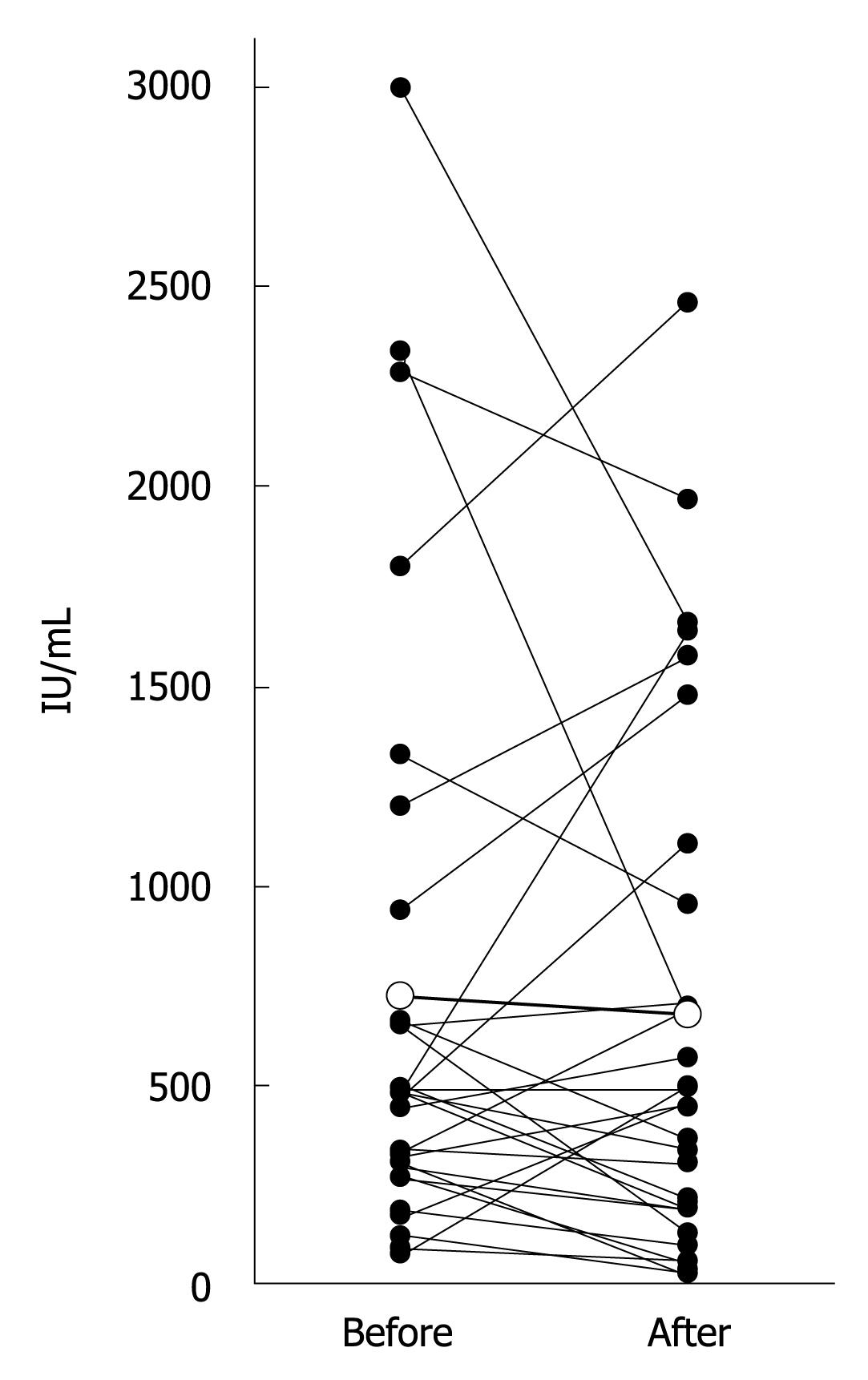 Figure 1 IgE levels measured before steroid treatment (Before) and during maintenance therapy (After) were compared in 29 patients. White circles show average values.
DISCUSSION

It was of great interest whether IgE could become a useful marker for therapeutic monitoring in AIP, like IgG and IgG4. From the results shown in Table 5, we cannot help but conclude that IgE is not a useful marker. However, this phenomenon is not strange in other allergic diseases. For example, Gunnar et al[18] reported that steroid treatment did not alter IgE levels in patients with atopic dermatitis. Kumar et al[19] showed that changes in serum IgE are not related to severity of asthma or allergic rhinitis. Exceptionally, in allergic bronchopulmonary aspergillosis, it is reported that the response of IgE (35% or more reduction) to steroid treatment is a sensitive marker in the management[20].

Although IgE does not seem to reflect disease activity, we speculate that this feature might be useful for the diagnosis of inactive AIP. Indeed, three patients in the present series showed low IgG4 (65, 98, and 133 mg/dL) at the diagnosis, but all of them showed high IgE (1000, 2339 and 480 IU/mL). When patients with a past history suggestive of AIP, such as voluntarily improved jaundice, do not show high IgG and IgG4, IgE should be measured. If IgE is also low, the possibility that their diagnosis is AIP will be low. If IgE is high, it might indicate AIP in an inactive stage.

In summary, the elevation of serum IgE is very frequent in AIP. It is also observed even in patients without other allergic diseases. IgE might not reflect the disease activity; however, it might be useful for the diagnosis of AIP in an inactive stage.

It is known that elevation of serum IgE is frequently observed in autoimmune pancreatitis (AIP). However, its clinical significance has not yet been clarified.

This study demonstrated the frequency of high IgE in AIP, and investigated whether IgE is related to the presence of extrapancreatic lesions and later clinical relapses. In addition, the transition of IgE before and after steroid treatment was investigated to confirm whether IgE can become a marker for therapeutic monitoring.

This study confirmed the high frequency of elevated serum IgE in AIP, although IgE does not seem to be related to the disease activity.

Measuring IgE might be useful for the diagnosis of AIP especially in an inactive stage.

These data about IgE were not positive, which means that IgE is not considered as a useful marker for AIP. However, the author revealed that many (86%) AIP patients have IgE elevation and some AIP patients with low IgG4 have a high level of IgE. IgE should be considered as one of the supportive parameters for diagnosis of AIP and the authors succeeded in clarifying that.