AIM: To examine body fluids such as ascitic fluid (AF), saliva, bile and pleural effusions for the presence of hepcidin using a novel radioimmunoassay (RIA).

CONCLUSION: We provide clear evidence that hepcidin-25 is present in bile, saliva, pleural and ascitic fluids. Hepcidin is likely to play a role here in innate immunity.

Hepcidin-25 is a cysteine-rich circulating bioactive peptide that is predominantly secreted from the liver and excreted in the urine[1]. It is synthesized as preprohepcidin and undergoes posttranslational processing before release into circulation in an active form[2]. It is a central iron regulator with in-vitro evidence of antimicrobial properties. Hepcidin exerts its regulatory effect by preventing the efflux of intracellular iron by binding to ferroportin channels[3]. These ferroportin channels are present on the basal surface of the intestinal enterocytes as well as hepatocytes, macrophages and placental cells and are predominantly involved in the export of iron from these cells[4]. Despite a considerable body of literature on this novel peptide, research has been impeded by the lack of a reliable assay. Initially a semi quantitative assay (immunodot) was described but more recently quantitative assays have been developed using surface-enhanced laser desorption/ionization time-of-flight mass spectrometry (SELDI-TOF-MS)[5] and liquid chromatography tandem MS (LC-MS/MS)[6,7].

The serum study comprised of 25 healthy controls (HC); 14 were females, mean age was 36 ± 11.9 years (age range: 21-62 years), were hospital colleagues recruited to measure serum hepcidin-25, ferritin and serum prohepcidin. HC with systemic illness (acute or chronic) or any history of regular use of medication including supplemental vitamins were excluded. A fasting venous blood sample was obtained between 08:30-09:00 h. Serum was separated and stored at -20°C for analysis.

Bile was collected from 12 patients undergoing endoscopic retrograde cholangiopancreatography (ERCP) for proven or suspected choledocholithiasis, mean age 66.9 ± 16.7 years, M:F = 5:7 (age range: 40-88 years). All patients had ultrasonography (USG) of the abdomen to identify choledocholithiasis, or cholelithiasis. Ten out of 12 patients recruited had cholelithiasis confirmed on USG. Two patients had a dilated common bile duct (CBD) without choledocholithiasis. During ERCP, CBD was cannulated and 2 mL of bile was aspirated before injecting contrast medium for CBD visualisation. Stone extraction or biliary sludge removal including sphincterotomy was done after bile collection to avoid contamination. Bile obtained was stored at -20°C.

Saliva was obtained from a separate cohort of 17 healthy volunteers, mean age of 35 ± 9.9 years (age range: 23-60 years), M:F = 8:9. A history of systemic illness or dental or pharyngeal pathology was excluded. Participants were not allowed to eat or drink 30 min before the collection of saliva. Ten minutes before collection, participants had to rinse their mouth with plain water. They had to chew on a cotton swab and return the same with saliva in sterile tube (Salivette, Sarstedt, UK) and stored at -20°C.

Eleven patients, mean age 72 ± 20.5 years (age range: 26-95 years), M:F = 7:4 were recruited for pleural fluid (PF) analysis. PF was collected by diagnostic thoracocentesis under sterile conditions and stored in a sterile container at -20°C. PF was analysed and divided into a transudate and exudate by comparing the total protein concentrations in fluid to that in blood as per Light’s Criteria[9]. Three patients had transudative fluid (PF-T) (M:F = 2:1). The underlying cause for fluid accumulation in this group was congestive heart failure secondary to ischemic heart disease. Eight patients had exudative fluid (PF-E) (M:F = 5:3). The underlying cause for fluid accumulation in this cohort was parapneumonic (5 cases) and neoplastic [3 cases (1 breast and 2 lung malignancies)].

One patient had transudative AF with spontaneous bacterial peritonitis (SBP) (M:F = 1:0) analysed for presence of hepcidin-25. The cause of ascites was cirrhosis of the liver secondary to alcohol misuse. The AF white cell count was 350/mm3 (90% polymorphs, 10% lymphocytes) and AF culture had grown Escherichia coli (E. coli).

Hepcidin-25 was measured using a novel competitive RIA. This was produced in our laboratory and has been described in our previous manuscript (Busbridge et al[8]).

The specificity of the antibody was also confirmed by Western blotting analysis of the precipitated proteins, where a single band of < 6 kDa was detected. Western blotting analysis was carried out by using 10 mL normal human plasma, which was first centrifuged and filtered through a 0.22 mm filter (Millipore, MA). After addition of 10-mL dithiothreitol, plasma was again filtered through a 30 kDa filter (Millipore) and the filtrate precipitated using 25% TCA. The precipitated proteins were resuspended in loading buffer and subjected to SDS electrophoresis on a 4%-16% NuPAGE Novex Bis/Tris gel (Invitrogen, UK). Western blotting was performed using an XCell II blot module (Invitrogen) and a 0.1 mm pore size nitrocellulose membrane (Sigma Aldrich). Non-specific sites were blocked with 5% BSA in PBS and the membrane probed with purified rabbit anti-hepcidin antibody (1 in 2000 dilution in blocking buffer), followed by incubation with a secondary anti-rabbit antibody conjugated with horseradish peroxidase (Sigma Aldrich). Specific signals were detected with 3,3’, 5,5’ tetramethylbenzidine liquid substrate (Sigma Aldrich) (Figure 1). 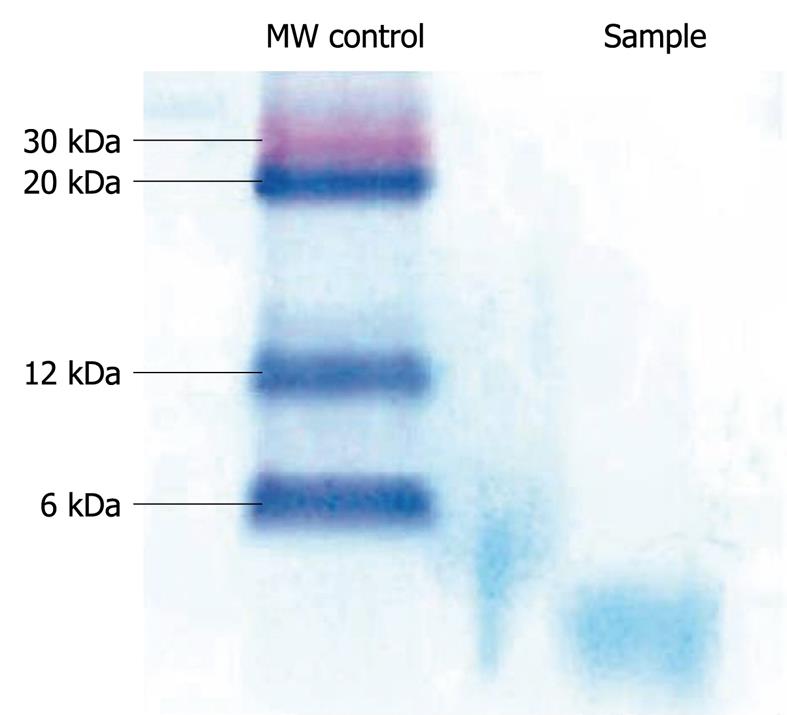 Values are expressed as mean ± SD as indicated. Quantitative variables were compared using unpaired t-test; Pearson’s rank correlation was used for calculating correlation between the hepcidin-25 and other variables. A value of P < 0.05 was considered significant. All statistical analyses were carried out using the statistical package GraphPad Prism version 5.0 for Windows, (GraphPad Software, San Diego California USA, http://www.graphpad.com).

Hepcidin-25 level was 65.64 ± 96.82 ng/mL in exudative fluid. The mean total protein level in the fluid was 43.69 g/L. The hepcidin-25 level was 14.10 ± 17.88 ng/mL in transudative fluid. Hepcidin-25 concentration in exudative fluid was higher than in transudative but did not reach statistical significance (P = 0.05, student t-test). This could be due to the small number of patients involved in the study. We demonstrated hepcidin-25 in all bodily fluids analysed using RIA. To our knowledge this is the first report confirming the presence of hepcidin-25 in these bodily fluids (Figure 2). 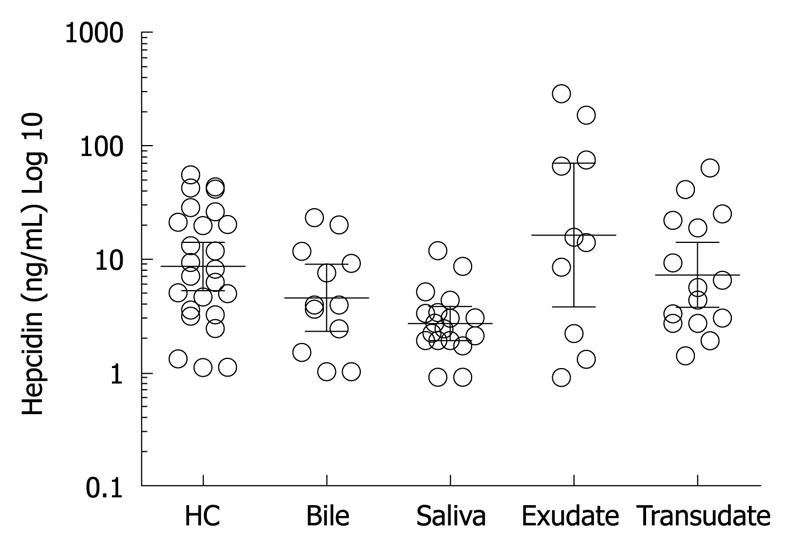 Hepcidin is a novel peptide due to its dual role as an ‘iron-hormone’ and ‘antimicrobial peptide’. However, previous research studies have been hampered due to lack of a reliable quantitative assay for hepcidin-25. Several factors have been cited for this difficulty including presence of non-biologically active iso-forms of hepcidin-20, hepcidin-22, and the fact that hepcidin-25 is conserved over evolution thus making an immunological response in host species difficult to determine[12]. Several semi quantitative and quantitative assays have recently been developed for hepcidin-25 measurement. The quantitative assays include ELISA[13] and MS. MS methods includes TOF-MS, LC-MS, matrix-assisted laser desorption ionization MS, and SELDI-MS[14,15]. Although very successful, the availability of the MS assay is limited to specialist laboratories as they require strict internal standards and specialised equipment. Two quantitative assays have been described using ELISA techniques. Ganz et al[13] have described a competitive quantitative ELISA assay using functional synthetic peptide hepcidin-25 while the method described by Koliaraki et al[16] detects hepcidin-25 using a recombinant functional hepcidin-25 peptide. Thus, although a number of methods are available to measure hepcidin-25, there does not appear to be a standardisation amongst various methods. The results of the first international round robin for the quantification of urinary and plasma hepcidin assays were published in an attempt to help standardisation issues[17].

Until recently, hepcidin-25 was shown to be present in urine and serum. However, its expression by various organs such as salivary glands, tonsils, trachea, lung and prostate have also been reported[18]. The exact nature and function of hepcidin expression in these organs remains unclear.

This study confirms the presence of hepcidin-25 in saliva. Its exact role in saliva is still uncertain but could contribute to the broad spectrum defence of the oral cavity along with peptides such as cathelicidins[19].

The presence of hepcidin-25 in bile may be a mechanism of hepcidin-25 excretion apart from urine. It may act along with α-defensins against gut microflora[20]. Further studies are needed to fully understand its role in bile.

Hepcidin in PF and AF

We were able to demonstrate the presence of hepcidin in pleural and AF where its iron regulator function is hard to explain. Hepcidin present in these fluids has unknown biological activity. Hepcidin-25 is a cationic peptide with 4 disulfide bridges[21]. The connection between hepcidin and infection/inflammation became clearer after the initial discovery in 2000. Shike et al[22], in 2002 showed that in white bass liver, infection with the fish pathogen Streptococcus iniae increased hepcidin mRNA expression 4500-fold. In another study by Nicolas et al[23] in 2002 injections of turpentine, a standard inflammatory stimulus, into mice induced hepcidin mRNA 4-fold and led to a 2-fold decrease in serum iron.

Hepcidin maintains a role in host defence by acting as a bridge between immunity and iron metabolism, as indicated by markedly induced hepcidin by infection and inflammation[24-26]. Park et al[1] have shown that hepcidin has antimicrobial activity against E. coli, Staphylococcus aureus, Staphylococcus epidermidis and group B Streptococcus. Hepcidin also exhibits antifungal activity against Candida albicans, Aspergillus niger and Aspergillus fumigatus.

Our study on the presence of hepcidin in bile, saliva and various other biological fluids provides further confirmatory evidence that hepcidin has evolved from being an antimicrobial peptide. Hepcidin may form part of human innate immunity and complement other antimicrobial peptides to provide a wide spectrum of mucosal immunity against pathogens.

Until recently iron metabolism had been extensively studied but poorly understood. With the discovery of hepcidin as an iron regulator in the body, there has been a significant growth in the knowledge related to iron metabolism. Crucial research has been done to explore the role of hepcidin in iron deficiency anaemia, anaemia of chronic disease and iron excess disorders.

Hepcidin is a 25 amino-acid peptide predominantly formed in the liver and is a key component in iron homeostasis. Its major role is to prevent iron export by binding to iron export channels, ferroportin, leading to internalisation and lysosomal degradation of the hepcidin-ferroportin complex. Interestingly, hepcidin is found throughout evolution and in amphibian species has possible antimicrobial properties while in humans its major action is iron metabolism. Prior research showed hepcidin expression in various human organs like heart, intestine and salivary glands. In this study, the authors demonstrate clear evidence that hepcidin is present in various bodily fluids with higher levels found in exudative fluids and could be a potential mechanism for innate immunity preserved over evolution.

Recent studies have highlighted the importance of hepcidin in iron metabolism, particularly anaemia of chronic disease and iron overload. There have also been reports of its expression in various proinflammatory disorders and various organs, linking it to innate immunity and iron metabolism. This is the first study to report that hepcidin is found in various biological fluids. Furthermore, in-vitro studies have suggested that hepcidin has antimicrobial activity.

By understanding how hepcidin is expressed and by blocking its expression, there may be a therapeutic potential in patients with anaemia of chronic inflammation. Further application could be that secondary infection of pleural and ascitic fluid complicating underlying diseases may be better understood by studying hepcidin levels in infected and non-infected patients.

Hepcidin is a protein involved in iron metabolism. Hepcidin is formed predominantly in the liver and is released in the circulation where its major function is hypoferremia by binding to iron export channel ferroportin. Hepcidin is expressed by various organs and thus it was conceivable that hepcidin would be found in various biological fluids. The exact role of hepcidin in these fluids remains uncertain and more studies are needed.

The authors present a nicely conceived and analysed study. It is well written and offers new information about the presence of hepcidin in human biological fluids.