Gastrointestinal perforations are conservatively managed at endoscopy by through-the-scope endoclips and covered self expandable stents, according to the size and tissue features of the perforation. This is believed to be the first report of successful closure of two gastro-cutaneous fistulas with over-the-scope clips (OTSCs). After laparoscopic gastric banding, a 45-year old woman presented with band erosion and penetration. Despite surgical band removal and gastric wall suturing, external drainage of enteric material persisted for 2 wk, and esophagogastroduodenoscopy demonstrated two adjacent 10-mm and 15-mm fistulous orifices at the esophagogastric junction. After cauterization of the margins, the 10-mm fistulous tract was grasped by the OTSC anchor, invaginated into the applicator cap, and closed by a traumatic OTSC. The other 15-mm fistula was too large to be firmly grasped, and a fully-covered metal stent was temporarily placed. No leak occurred during the following 6 wk. At stent removal: the OTSC was completely embedded in hyperplastic overgrowth; the 15-mm fistula significantly reduced in diameter, and it was closed by another traumatic OTSC. After the procedure, no external fistula recurred and both OTSCs were lost spontaneously after 4 wk. The use of the anchor and the OTSC seem highly effective for successful closure of small chronic perforations.

Gastrointestinal (GI) perforations require prompt closure and control of extraluminal fluid collections and sepsis. They have been managed traditionally by surgery[1-3], but a conservative endoscopic approach has recently been preferred with the advantages of negligible morbidity and mortality, a short hospital stay, and the possibility of prompt resumption of an oral diet[2,4-6].

Routine endoscopic methods to close GI perforations are endoclips and covered self-expandable stents; the choice being related to the width and tissue features of the margins[7,8]. Endoclips are metallic double-pronged clips loaded on a deployment catheter introduced through the operative channel of the scope [through-the-scope (TTS) clips][7]. Although acute small (< 15 mm) perforations can be successfully closed with TTS clips[9], these devices achieve controversial results when used for larger perforations[10,11], and seem technically inadequate for chronic perforations, due to poor grasping ability and insufficient strength to close fibrotic margins[7]. Therefore, TTS clips have rarely closed chronic leaks[12-17] and are generally considered only as a supplementary technique[8].

Covered self-expandable metal stents (SEMSs) or self-expandable plastic stents (SEPSs) are an effective method for sealing and healing more than 80% of chronic GI leaks, but have drawbacks: the removal of partially-covered SEMSs may be difficult due to the ingrowth at uncovered ends and the risk of mucosal tears, hemorrhage and subcutaneous emphysema[4,18,19], whereas fully-covered stents show a migration rate of up to 50% and often require replacement[6,20,21].

Twenty-six months after laparoscopic gastric banding, a 45-year-old woman presented severe epigastric pain. The diagnosis of band erosion with penetration through two large tears at the posterior wall of the gastric fundus was established by esophagogastroduodenoscopy (EGD), and a subphrenic abscess was demonstrated by computed tomography (CT). Management included surgical band removal, suturing of the gastric wall with two omental patches, and abdominal drainage.

However, external drainage of enteric material persisted for 2 wk and the barium swallow revealed two fistulas at the esophagogastric junction (Figure 1). EGD showed two opposite perforations of 10 and 15 mm (Figure 2), with fistulous tracts partially and fully negotiable by the 9.8-mm endoscope, respectively. 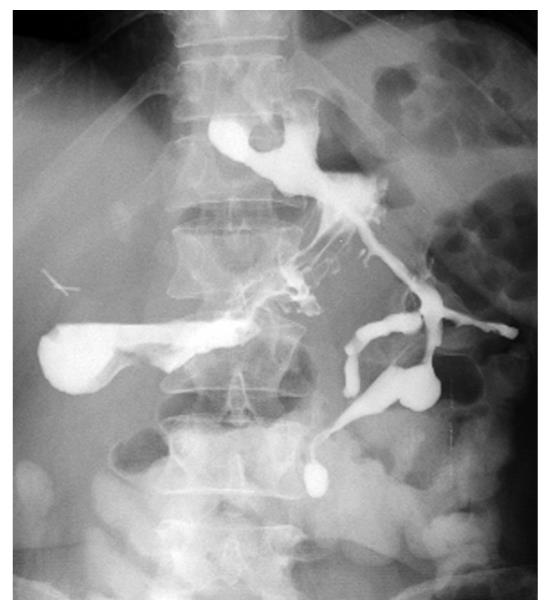 Figure 2 Endoscopic view of the 15-mm (A) and 10-mm (B) fistulous openings on the left and right sides, respectively, above the esophagogastric junction (C).

After cauterization of the margins, the proximal segment of the 10-mm fistula was grasped by the OTSC anchor, invaginated into the applicator cap (Figure 3A), and closed by a 9-mm traumatic OTSC (Ovesco Endoscopy GmbH, Tuebingen, Germany) (Figure 3B). On the contrary, the 15-mm fistula was too wide to be firmly grasped by the anchor and therefore it was closed with a fully-covered esophageal self-expandable metal stent (SEMS; Niti-S, Taewoong, South Korea), which also covered the OTSC.

The barium swallow performed after 24 h confirmed the complete sealing of both fistulas (Figure 3C) and the patient was discharged on an oral diet.

After 6 wk, the fully-covered SEMS was easily removed, and the EGD showed that the OTSC was buried into an intense overgrowth reaction (Figure 4). The 15-mm fistula diameter was reduced to 8 mm, and therefore it was sealed by a second 9-mm traumatic OTSC (Figure 5). 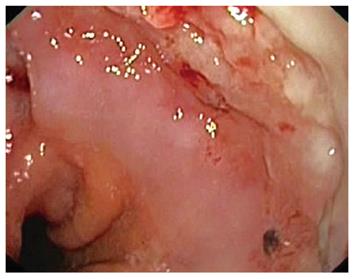 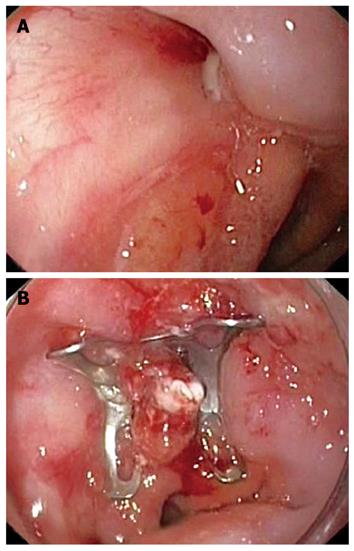 During the following 8 wk, no external fistula or abdominal collection was observed by barium swallow (Figure 6) or the dye leak test with methylene blue. Both OTSCs were lost within the second and fourth weeks of follow-up after SEMS removal. 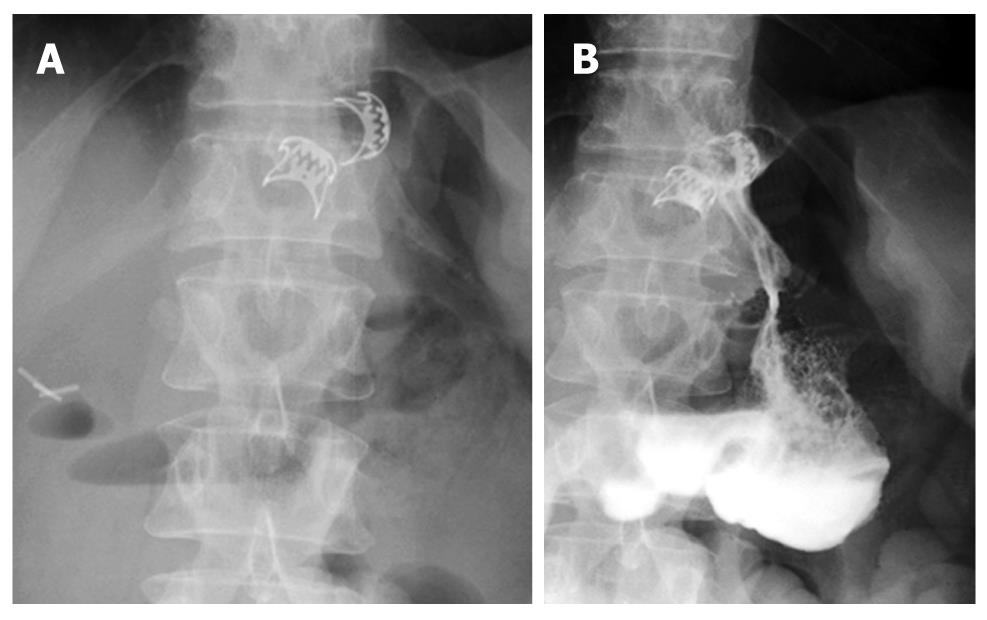 Figure 6 OTSC closure of the two fistulas. A: Two OTSCs in place; B: No leaks from both OTSCs at barium swallow.
DISCUSSION

The OTSC has a different conception from TTS clips: (1) the OTSC is in nitinol with a “leghold trap” memory shape, is loaded on a cap placed on the scope tip, and has the capacity to grasp and compress the tissue more widely and with greater strength, without provoking ischemia or cutting the tissue; and (2) the target tissue needs to be caught and pulled into the cap by specifically developed devices that make addressing tangential lesions easier.

Preliminary small case series suggest that the OTSC is effective for hemostasis of non-variceal bleeding[22,23]. Moreover, results from a few human cases[22-24] and animal studies[25-27] have indicated that this device may be appropriate to close acute gastric and colonic perforations that occur during endoscopic mucosal resection, and natural orifice transluminal endoscopic surgery orifices up to 20 mm in size.

This is the first report of successful closure of two inveterate perforations by OTSCs. In our opinion, the success of the procedure should be attributed both to the anchor used to pull the tissue into the cap and to the OTSC itself. The three rigid hooks of the anchor firmly grasp the perforation margins at three equidistant points, permitting to pull the margins circumferentially into the cap. In the present case, the anchor was opened beyond the luminal margins of the fistulous orifice into the proximal segment of the fistolous tract that was partially invaginated into the cap before the release of the OTSC. This mechanical result would not have been achieved using the other OTSC device, the twin grasper, which has two independently movable branches that grasp the perforation margins at two opposite points. This two-point grasping method may be sufficient for acute perforations with normal elastic tissue margins, but not for fibrotic hard chronic ones that would be only partially invaginated into the cap (Figure 7). 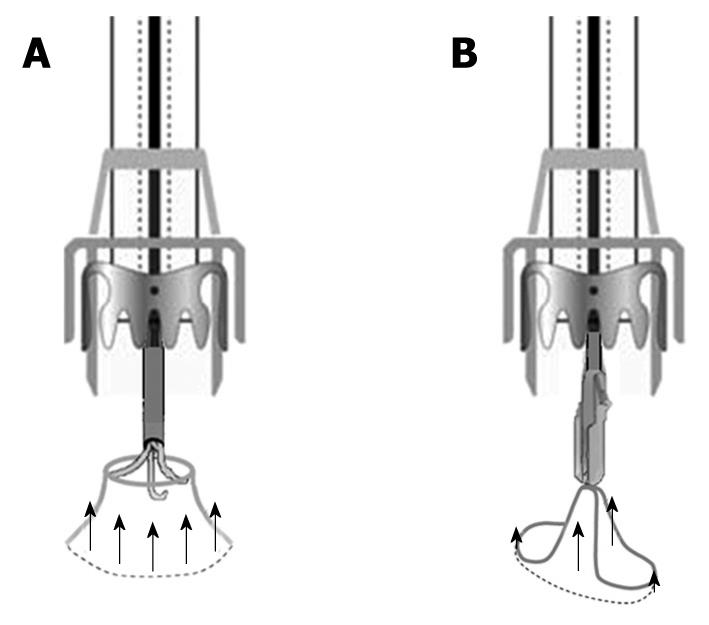 Both traumatic OTSCs placed in the present case were lost after a period between the 2nd and 4th week after SEMS removal. Whether traumatic or atraumatic jaws have different “stay-in-place” periods is unknown. In previous studies, acute perforations have been successfully closed independently from the OTSC teeth shape after remaining in place for similar periods of time[22,26], and only occasionally for > 4 wk[24,26]. Although the traumatic teeth may reduce the possibility of hard tissue slipping out of the OTSC, prolonging its in situ stay, strong tissue compression could be more important to determine long-standing closure. Moreover, the use of oversized OTSCs may increase the capacity to grasp and close fibrotic margins of chronic perforations and its permanence.

Finally, no OTSC-related complications occurred. An intense overgrowth embedded the first OTSC after SEMS removal, but it did not prevent the spontaneous loss of the clip during follow-up. It remains to be established whether the overgrowth reaction would have occurred without the stent. Although endoscopic follow-up was not scheduled in previous studies, OTSC-related overgrowth has not been observed in humans[22-24], whereas Schurr et al[26] have observed minimal overgrowth in the colon of some pigs after 1 mo.

In conclusion, the OTSC may be the least invasive method to close chronic small fistulas or leaks, if prospective large comparative studies with fully-covered stents will confirm our observation.