AIM: To investigate the gastroprotective effect of vardenafil against indomethacin-induced gastric damage.

METHODS: Forty-eight female Wistar albino rats were randomly divided into 6 groups. Group 1 received saline only. Group 2 (indomethacin) received indomethacin. Rats in group 3 and 4 were pretreated with different doses of famotidine. Group 5 and 6 were pretreated with different doses of vardenafil. Rats in groups 3 to 6 received 25 mg/kg indomethacin 30 min after pretreatment. The animals were sacrificed 6 h later and their stomachs were opened. Gastric lesions were counted and measured. The stomach of each animal was divided in two parts for histopathological examinations and nitric oxide (NO) and malondialdehyde (MDA) assays, respectively. 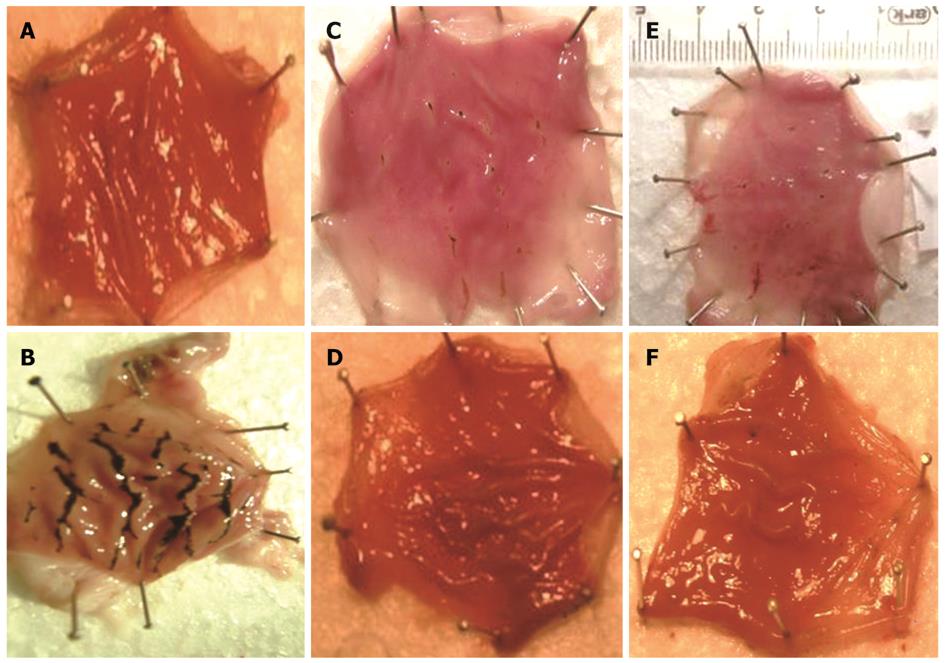 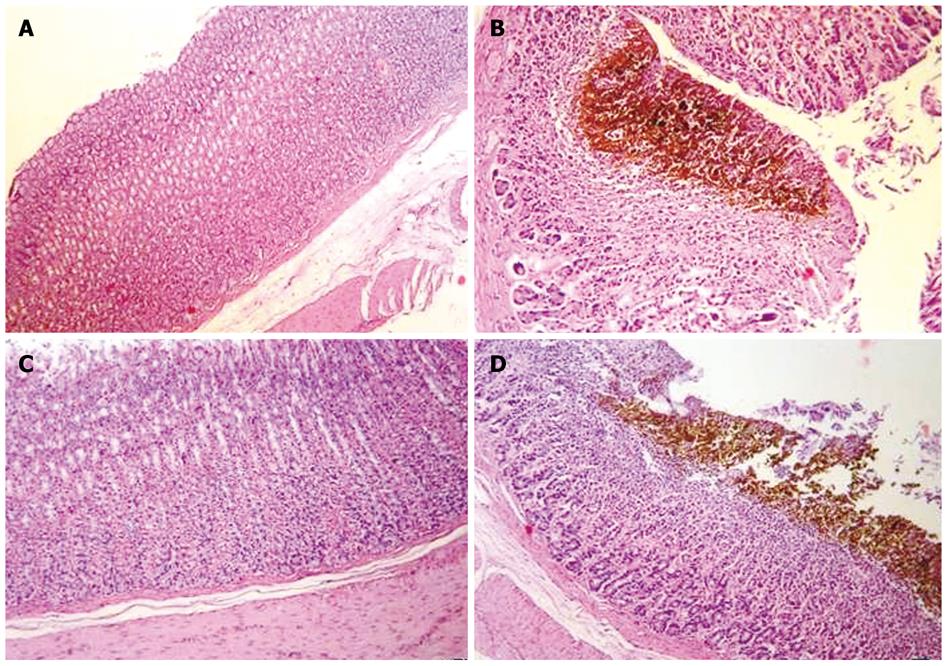 Gastric mucosal damage is a common disorder of the gastrointestinal system. The pathogenesis of gastric ulcers is based on complex interactions between aggressive and protective factors. Nonsteroidal anti-inflammatory drugs (NSAID) are known to be aggressive agents for gastric ulcer development. People of advancing age need many drugs, including NSAIDs, for the treatment of pain and inflammation due to rheumatological disturbances.

Vardenafil is a phosphodiesterase (PDE) V inhibitor that has been used for the treatment of erectile dysfunction[1] and, more recently, for pulmonary hypertension[2,3]. Recent laboratory studies demonstrated successful effects of PDE V inhibitors on cardioprotection after ischemia reperfusion injury[4,5], as well as in ischemic injury of other organs, such as the colon, liver, and brain[6,7]. Deibert et al8] revealed that vardenafil had increased portal flow and lowered portal pressure in patients with cirrhotic livers.

Diminished mucosal circulation has been blamed as one of the etiological factors in gastric ulcer formation. Like prostaglandins, the L-Arginine/nitric oxide (NO) pathway is a major protective system in gastric mucosa[9] via relaxation of the arterial smooth muscles. Inhibition of nitric oxide synthase aggravates the injury in animal models of gastric ulcers[10].

In this study, we have studied the effects of vardenafil on the acute gastric injury caused by administration of indomethacin.

The study was approved by the Zonguldak Karaelmas University (ZKU) Animal Experiments Local Ethic Committee. The study was carried out on 48 female Wistar albino rats weighing 200-250 g, obtained from the Experimental Animal Laboratory of Medical Faculty of ZKU. The rats were kept under standard conditions (temperature; 22-24°C, and 12:12 h light/dark). The experimental procedures were carried out in accordance with international guidelines for the use and care of laboratory animals. All animals were fed with pellet food produced especially for experimental animals. Water was available ad libitum. All experiments were performed at the same time of the day to avoid diurnal variations of putative regulators of gastric functions.

Famotidine and vardenafil were dissolved in distilled water. All drug solutions and suspensions were freshly prepared. Gastric ulcers were inflicted by oral administration of indomethacin 16-18 h after starvation.

Animals were randomly divided into six groups. In Group 1 (n:8) rats received only 8 mL/kg of saline by gavage. Rats in Group 2 (n:8) received 25 mg/kg indomethacin in a volume of 8 mL/kg of saline. The rats in group 3 and 4 were pretreated with famotidine, 5 mg/kg and 20 mg/kg, respectively. Rats in groups 5 and 6 were pretreated with 2 mg/kg and 10 mg/kg vardenafil, respectively. After 30 min, 25 mg/kg indomethacin in a volume of 8 mL/kg of saline were administered by gavage. Six hours after oral administration of indomethacin, all rat groups were anesthetized with an intramuscular injection of 100 mg/kg Ketamine (Ketalar®, Parke Davis-Eczacıbaşı, Istanbul, Turkey). A midline abdominal incision was then performed. All rat groups were sacrificed via cardiac puncture, and their stomachs rapidly removed, opened by an incision along the lesser curvature, and rinsed in ice-cold distilled water[11]. Gastric tissues were pinned out on a wax platform. Macroscopic damage to the gastric mucosa was assessed. Hemorrhagic and ulcerative lesions were counted and their lengths were measured on square millimeter paper. Gastric mucosal lesions were expressed as the sum of the lengths (mm) of all lesions for each stomach, which was used as the ulcer index (UI)[12,13]. Gastric lesions were judged by two independent researchers who were blinded to the protocol. The average score of the two independent observers were taken into account, and the sum of the total scores was divided by the number of animals to obtain the mean UI for each group.

The stomach of each animal was divided into two parts. One part of the stomach was excised, immersed in saline, and immediately stored at -40°C for measurement of NO and MDA levels.

The other part of the stomach was fixed in 10% neutral formalin, embedded in paraffin, and cut into 5 μm sections. The sections were stained with hematoxylin eosin (HE) and examined under the light microscope by a blinded pathologist for histological changes.

The results obtained from vardenafil groups were evaluated by comparing them with those of sham, indomethacin, and famotidine groups.

Despite the great progress in the treatment protocols, peptic ulcers are still a major ongoing heath problem. The gastric barrier protects the mucosa against damage of its deeper structures by noxious substances. Mucosal microcirculation of the stomach has an important role in gastric mucosal protection[15]. Prostaglandins and NO are the main factors that regulate gastric blood flow. NSAIDs cause gastric mucosal damage by inhibiting endogenous prostaglandins due to inhibition of COX-1 and COX-2[16,17]. Prospective data from the Arthritis, Rheumatism, and Aging Medical Information System (ARAMIS) states that 13 of every 100 patients with rheumatoid arthritis treated with NSAID for one year suffer from serious gastrointestinal complications related to the NSAIDs[18]. Indomethacin administration increases aggressive factors but decreases protective factors[19,20].

Macroscopic evaluations of gastric tissues revealed that vardenafil given in 2 mg/kg protects gastric mucosa better than famotidine at a dose of 5 mg/kg. Vardenafil has clinically important gastroprotective effects at high doses (10 mg/kg). Thus, the gastroprotective effect of vardenafil was dose dependent. In the stomach tissue of rats given indomethacin, the level of the lipid peroxidation product, MDA, increased significantly compared to the sham operated group. Tissues exposed to oxidative stress include large amounts of toxic oxygen radicals, which induce lipid peroxidation leading to MDA formation[24,25]. The lowest MDA values were detected in the famotidine groups. The mean MDA values in the vardenafil groups were similar to the sham group (Table 2). Thus, vardenafil pretreatment has inhibited MDA production in indomethacin treated rats.

Possible mechanisms of gastroprotection of PDE V inhibitors are increased production of tissue NO[23,26-28] or increased tissue cGMP level without modifying NO content[22,25,29,30]. The NO levels are slightly elevated in vardenafil pretreated rats in our study; however, the level of NO in either of vardenafil groups did not surpass the level of NO determined in the sham group. Some studies revealed gastroprotective effects of some agents without significant alterations in NO or MDA levels[31]. Determination of tissue cGMP level was not included in our study design. This is a short armcoming of our study design. PDE V inhibitors might prevent indomethacin-induced gastric mucosal damage in either mechanism.

In conclusion, vardenafil reduced gastric mucosal damage significantly at a high dose. Patients treated with PDE type-5 inhibitors might benefit from the additional gastroprotective advantages of these drugs, especially in high doses.

Peptic ulcer is a common disorder of the gastrointestinal system. The increase in non-steroid anti inflammatory drug (NSAID) ingestion in the treatment of inflammation, fever, and pain is one of the major etiological factors for peptic ulcers. Despite the many drug treatment protocols used to date, peptic ulcer still remains a major public health problem.

Vardenafil has being used in the treatment of functional impotence; however, its effects on gastric mucosa have not yet been investigated. The research’s aim was to determine its effectiveness in gastroprotection against NSAID-induced gastric lesions in comparison with famotidine.

The study results suggest that vardenafil might be used as a potential therapeutic drug to prevent NSAID-induced gastric ulcer formation.

This work might provide the first experimental data that directly shows the beneficial effect of a phosphodiesterase V inhibitor on gastric ulcers. In this manuscript, Karakaya et al report that administration of a phosphodiesterase V inhibitor (Vardenafil), dose-dependently suppresses indomethacin-induced gastric ulcers in rats. For comparison purposes, famotidine was used. There is only limited information suggesting the potential beneficial effect of vardenafil on ulcer healing, the data presented would be considered to provide attractive clinical information, although a clear mechanistic insight is not provided.