The hemorrhagic simple hepatic cyst is extremely rare and can sometimes be confused with biliary cystadenoma or cystadenocarcinoma. Here we present two cases of huge hemorrhagic simple hepatic cysts. Case 1 was a 43-year-old man with a cystic lesion measuring 13 cm × 12 cm in the right hepatic lobe. Ultrasound and computed tomography showed several mural nodules on the irregularly thickened wall and high-density straps inside the cyst. Case 2 was a 60-year-old woman with a huge cyst measuring 15 cm × 14 cm in the central liver. Ultrasound and magnetic resonance imaging showed the cystic wall was unevenly thickened and there were some flame-like prominences on the wall. The iconographic representations of the two cases mimicked biliary cystadenoma. Cystectomy and left hepatectomy were performed for the two patients, respectively. Both patients recovered quickly after their operations and showed no recurrence. 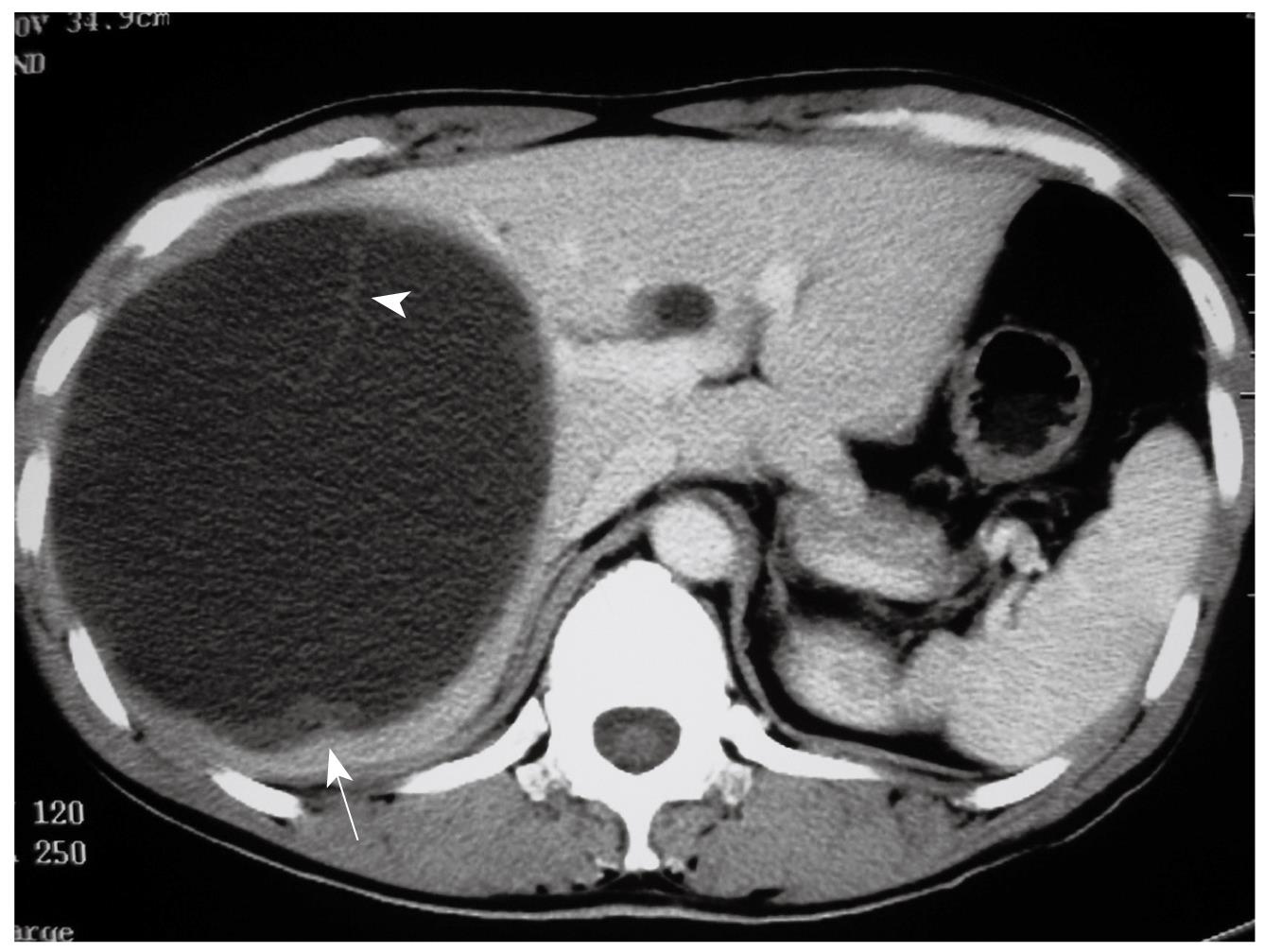 Figure 2 MRI (T2 weighted sequence) showing a huge cyst in the central liver with liquid content and flame-like prominences inside.

Intracystic hemorrhage is an extremely rare complication of simple hepatic cysts and few cases have been reported worldwide. The hemorrhage usually occurs in solitary huge hepatic cysts in older patients. Massive bleeding into the cysts can significantly enlarge the cysts in a short time, which might partly contribute to the huge size of the cysts. The clinical manifestations of the hemorrhagic hepatic cysts are usually lack of specificity and the iconographic representations often mimic biliary cystadenoma or cystadenocarcinoma. Therefore, it is sometimes very difficult to make a precise diagnosis and select the appropriate treatment for this disease in clinical practice.

Here we present two cases of huge hemorrhagic simple hepatic cysts mimicking biliary cystadenoma, and discuss the diagnosis and the treatment of the disease.

Case 1 was a 43-year-old man admitted to hospital complaining of right upper quadrant abdominal pain for seven days. No positive clinical signs were found upon physical examination. The patient’s serum carbohydrate antigen 19-9 (CA 19-9) concentration was four times higher than normal. Abdominal ultrasound examination showed a liquid anechoic area measuring 13 cm × 12 cm in right hepatic lobe. The cyst had an irregularly thickened wall with several mamelons on it. There were flocculation echoes inside the cyst. A computed tomography (CT) scan showed a low density cystic lesion with high density straps inside. The thickened cyst wall and mural nodules were not enhanced on contrast CT (Figure 1).

Case 2 was a 60-year-old woman admitted to hospital with a huge cystic liver mass found by regular ultrasound examination without any symptoms. The mass could be partly palpated below the right costal margin. The patient’s serum concentration of CA 19-9 was normal. Abdominal ultrasound examination showed a huge echoless cyst measuring 15 cm × 14 cm in the central liver. The margin of the cyst was clear but its wall was unevenly thickened. There were some flame-like prominences on the wall. MRI showed the cyst content was liquid; the flame-like prominences were seen but not enhanced with contrast (Figure 2).

It was difficult to make a diagnosis in either case preoperatively. Biliary cystadenoma was highly suspected. Operations were performed for both cases. Case 1 received a cystectomy and case 2 received a left hepatectomy. The pathological diagnosis was hepatic simple cysts accompanied by intracystic hemorrhage. The mural nodules and prominences on the cyst wall were blood clots. Both patients recovered quickly after their operations and have been alive for six years and two years, respectively.

The clinical manifestation of this disease is lack of specificity. Generally the patients might have acute or chronic upper abdomen pain, but some patients have no symptoms[1-4]. Extra attention should be paid to patients whose symptoms are relative to the severe complications caused by the intracystic hemorrhage. For example, Iguchi et al[5] reported a 76-year-old man with severe edema of both lower extremities and a CT scan revealed an enlarged hemorrhagic hepatic cyst compressing inferior vena cava (IVC) in which massive thromboses formed. Buyse et al[6] reported a patient with simple hepatic cyst developed acute dyspnoea. It was found that the intracystic bleeding led to the enlargement of the cyst and compression of the IVC, followed by pulmonary embolism and dyspnoea. The clinical signs of hemorrhagic simple hepatic cysts depend on the size, location, and complications of the cysts, in which abdominal mass is more common.

The iconographic representations of hemorrhagic hepatic cyst sometimes mimic biliary cystadenoma or cystadenocarcinoma. The common manifestation on ultrasound includes hepatic cystic mass, hyperechoic intracystic straps, and irregularly thickened cyst wall with flame-like prominences or convex palliates. The mural nodules can sometimes be seen to be mildly enhanced on contrast enhanced CT and MRI[2], which increases the difficulty in differential diagnosis with cystic neoplasms. In fact, as proved by surgery and histological examination, the mural nodules are usually blood clots or organized hematomas[1,2]. In our cases, although the mural nodules and prominences on the cyst wall were not enhanced on contrast CT and MRI, the suspicion of biliary cystadenoma could not be precluded.

The distinction between hemorrhagic simple hepatic cysts and biliary cystic neoplasms can prove difficult to determine by clinical and iconographic features alone. For differential diagnosis, percutaneous transhepatic aspiration might be helpful if serosanguineous fluid is obtained[4]. However, the puncture should be forbidden if malignancy is highly suspected. Naganuma et al[7] reported that contrast-enhanced ultrasound clearly showed microbubbles oozing from the cyst wall into the cyst cavity in a case of hepatic cyst with intracystic bleeding, suggesting contrast-enhanced sonography might be a useful diagnostic tool for the disease. Akiyama et al[8] also reported that Levovist ultrasonography imaging could play an important role in the correct diagnosis of a simple hemorrhagic cyst, by demonstrating the avascularity of the visualized intracystic structures. Horsmans et al[9] found in a four-patient small group that both serum and cystic fluid CA 19-9 levels were elevated in the two patients with cystadenoma or cystadenocarcinoma, but remained normal in the other two patients with hemorrhagic simple cyst. This suggested that the determination of serum and cyst fluid CA 19-9 levels might be of help in distinguishing between hemorrhagic simple cyst and cystadenoma or cystadenocarcinoma. However, other studies revealed that the CA 19-9 levels in neither serum nor cyst fluid had a relationship to the benign or malignant property of hepatic cystic lesions[10-12]. In the present two cases, the serum CA 19-9 level was high in one case but normal in the other case, which seems to agree with the latter standpoint. Except for biliary cystadenoma and cystadenocarcinoma, other hepatic lesions such as hemangioma[13], abscess, and parasitic cyst should also be differentially diagnosed.

Treatment for the hemorrhagic simple hepatic cysts should be active because intracystic bleeding can enlarge the cysts significantly and cause severe complications, such as rupture, infection, and compression of the IVC leading to venous return obstruction or thrombosis. For poorly conditioned patients, transcatheter arterial embolization, transhepatic cyst drainage, intracystic ethanol injection or noninvasive methods are indicated. These methods can obtain therapeutic effect in some patients, though the bleeding may recur afterwards[3-5,14,15]. Surgery should be performed for most well conditioned patients, especially those whose diagnosis does not preclude malignancy. The operations can include partial hepatectomy, cystectomy, and fenestration. Partial hepatectomy and cystectomy can remove the whole cyst and reach curative effect[1-4,8,9,11,13,16]. Occasionally, a fenestration operation is performed to simplify the procedure, which can also obtain a good therapeutic effect[6].