AIM: To investigate the clinical implications of lipid deposition in the pancreas (fatty pancreas).

METHODS: The subjects of this study were 293 patients who had undergone abdominal computed tomography (CT) and sonography. Fatty pancreas was diagnosed by sonographic findings and subdivided into mild, moderate, and severe fatty pancreas groups comparing to the retroperitoneal fat echogenicity.

It has been reported that increases in triglyceride and free fatty acids causes ectopic fat deposition in the liver, heart, muscles, and pancreas. This is called steatosis and is known to be related to obesity and/or insulin resistance[1]. In particular, steatosis in the liver (or fatty liver) refers to fat deposition in hepatocytes, and its pathophysiology, diagnostic criteria, clinical implications are already well known. However, few studies have been done on lipid deposition in the pancreas (fatty pancreas) and its clinical implications.

A recent animal study reported that lipid deposition in pancreas islet cells due to a high fat/high glucose diet could damage pancreatic beta cells and make them hyperglycemic[1]. However, another study reported that there was no histological evidence of the existence of steatosis in the human pancreas and no reports have clearly demonstrated that the increase of pancreas echogenicity implied steatosis of the pancreas or fat deposition[2]. Autopsy studies reported pathologic findings of pancreatic steatosis in interlobular septa rather than in pancreas acinar cells[3–5], and fat deposition related to aging[67]. According to an animal study, pancreatic steatosis caused anomalies of pancreas islet cells leading to hyperglycemia[8–10]. Some authors suggested that pancreas islet cell damage that occurs in pancreatic steatosis is accompanied by hyperlipidemia and this plays an important part in the generation of type 2 diabetes[11]. Gullo et al[12] suggested that hypercholesterolemia causes fat deposition in the pancreas and this change is related to hyperamylasemia. In this study we investigated the clinical implications of fatty pancreas and the correlation between insulin resistance and metabolic syndrome.

The subjects of this study were adults who visited an obesity clinic and for whom doctors performed physical examinations and took their medical histories. Those who had diabetes, pancreatic disease, thyroid disease, renal disease, liver disease, and who drank alcohol over 40 g daily for male and 20 g daily for female were excluded from the subjects. Among them, 293 people who underwent abdomen sonography and/or fat measurement CT for evaluation of abdominal fat distribution were chosen as the subjects. Daily alcohol intake, past history, and other general characteristics of the subjects were collected through questionnaires.

We measured the height and body weight of subjects in light clothing to calculate the Body Mass Index (BMI = kg/m2). For waist circumference, we used a tape measure and measured in the middle part between the lowest rib and the iliac crest of the pelvis, horizontal to the ground with the subject in an upright position. Blood samples were test for liver functions, fasting glucose, HbA1c, insulin, total cholesterol, triglyceride, high density lipoprotein, and low density lipoprotein, after fasting for 12 h.

Abdomen visceral fat, subcutaneous fat, total fat, and thigh muscle fat areas were measured. A 16-channel multiplex abdominal CT system (General Electric Medical Systems, Milwaukee, USA) was used and measurements were made at the location of the umbilicus and middle part of the thigh. The embedded computer was used for calculations. Hounsfield units (HU) were measured at five different parts of the pancreas (head, neck, body, tail, and uncinate process) and three different parts of the spleen. The differences between the mean values of them were determined. If this difference was -5 or lower, it was classified into the fatty pancreas group and the rest were classified into the non-fatty pancreas group.

The criteria for metabolic syndrome diagnosis followed the NCEP-Adult Treatment Panel III (ATP III), and the visceral obesity was defined by substituting it with the standard waist circumference in the Asia-Pacific Region. Diagnostic criteria were defined as when three or more items of the following were met: visceral obesity (waist circumference ≥ 90 cm for males, or waist circumference ≥ 80 cm for females), increased triglyceride (≥ 150 mg/dL), decreased HDL (< 40 mg/dL for males, < 50 mg/dL for females), hypertension (≥ 130/85 mmHg), and fasting glucose (≥ 110 mg/dL).

To analyze the factors related to fatty pancreas, we conducted a multiple logistic analysis for variables, which were found to have significant relationships with fatty pancreas from the univariate analysis. The multiple logistic analysis was conducted by adding variables in three steps. In the first stage, Model I, age, sex, HOMA-IR, and fasting glucose were used as the independent variables and fatty pancreas as the dependent variable. In Model II, triglyceride and free fatty acid, which were already known to be related to fatty liver, were added to Model I. In Model III, abdomenal visceral fat, subcutaneous fat area, and thigh muscle fat area were added to Model II to evaluate the body fat distribution. The multiple logistic analysis found that HOMA-IR had a strong correlation with fatty pancreas, even after correction of age and sex, and this did not change even after correction for triglycerides, cholesterol and free fatty acid. However, after correction with the visceral fat area, the visceral fat showed the strongest correlation with fatty pancreas; but, HOMA-IR did not show a significant correlation (Table 2).

Comparison of characteristics according to fatty pancreas by sonography

The pathophysiology and diagnostic criteria for steatosis in liver or fatty liver are already established. Pancreas echogenicity in abdomen sonography is known to be determined by peripancreatic fat deposition rather than pancreatic parenchymal deposition[6], and it was reported that this correlated with age and subcutaneous fat[14]. However, there have been few studies on lipid deposition in the pancreas and its clinical implications.

Furthermore, this study subdivided fatty pancreas by the degree of pancreas echogenicity, and compared it with HOMA-IR, visceral fat, triglyceride, and ALT. The correlation coefficients were 0.250, 0.396, 0.245, and 0.276, respectively (P < 0.001), demonstrating statistically significant correlation with fatty pancreas severity (Figure 2). A comparative analysis with various other factors is needed with a greater number of subjects. 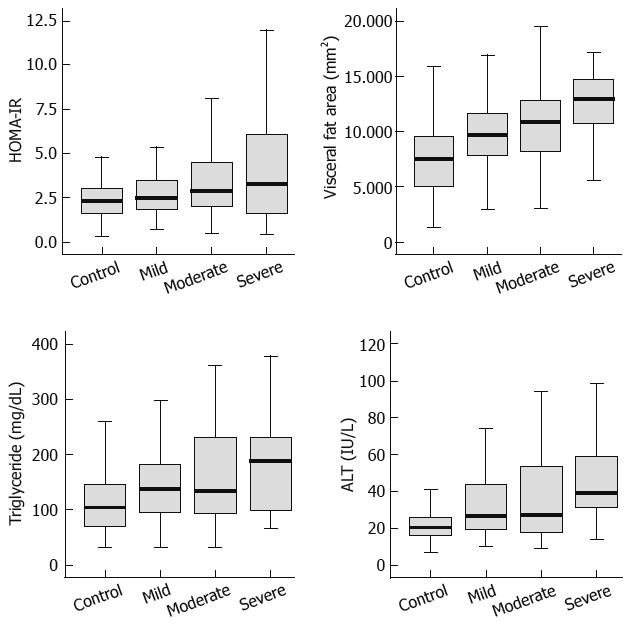 This study found that HOMA-IR, an insulin resistance marker, had an independently significant correlation with fatty pancreas; but, there were no differences in fasting blood sugar between the two groups. The reason for this seems to be that diabetes was excluded from the selection conditions for subjects.

Evaluation of pancreas by abdominal sonography is introduced as a screening tool for diagnosis of pancreatic disease by many authors because of its significant accuracy, cost-effectiveness, and few side effects[22]. Therefore, evaluating pancreas echogenicity during abdominal sonography, which is frequently used in health examinations, is expected to play a part as another indicator for screening for metabolic syndrome and insulin resistance.

This study does suffer from a few limitations. Firstly, the fatty pancreas group (n = 180) was larger than the non-fatty pancreas group (n = 113), because it was a retrospective study of limited subjects of a single medical center. Secondly, the hyperinsulinemic euglycemic clamp technique, which is know to be the most accurate evaluation method of insulin resistance, was not used and this needs to be incorporated into in future studies. Thirdly, the degree of fatty pancreas was not well defined, and there might be problems with inter-observer agreement among ultrasonographers when grading different levels of pancreas echogenicity.

This is the first study that evaluated pancreatic steatosis using sonography and the clinical factors related to it, including its relations with insulin resistance and metabolic syndrome. Additional studies are needed to investigate the actual progress of fatty pancreas into metabolic diseases.

Insulin resistance, visceral fat, triglyceride, and alanine aminotransferase (ALT) tended to increase with the degree of fat deposition in the pancreas on sonography. In a multivariate logistic regression analysis, insulin resistance, visceral fat, and ALT level were independently related to fatty pancreas after adjustment for age, body mass index, and lipid profile. Incidence of metabolic syndrome in the fatty pancreas group was significantly higher than in the control group.

This study contains useful information on a difficult topic to study; i.e. fatty pancreas. The authors also speculate on a possible relationship between metabolic syndrome and fatty pancreas and/or fatty liver.