Sclerosing mesenteritis is a rare condition that involves the small or large bowel mesentery. An unusual presentation of this condition, which led to difficult preoperative assessment and diagnosis, is described. This report is followed by a comprehensive review of the literature.

Sclerosing mesenteritis is a rare benign condition that affects the intestinal mesentery. Its presentation can be quite varied because of the different histopathological processes involved in the evolution of this condition. Diagnosis can be challenging, as is its management. An unusual presentation of this condition is described, followed by a comprehensive review of the literature.

A 74-year-old man was admitted as an emergency with acute abdominal pain and distension. He previously underwent an abdominoperineal resection 10 years ago for rectal cancer, and most recently had a surveillance colonoscopy about 2 wk prior to admission.

On initial assessment, he had a slightly elevated temperature (37.4°C). There were no signs of peritonitis, but his abdomen was slightly distended and had minimal central abdominal tenderness. His blood investigations, which included a full blood count, C-reactive protein, amylase, serum electrolytes and liver function tests, were all within normal limits. The erect chest X-ray showed pneumoperitoneum on both sides, and the abdominal film showed some distended small bowel loops in the central abdomen.

Although he had evidence of a perforated viscus on the X-ray, he was managed conservatively, in view of his relative clinical wellbeing and lack of hematological and biochemical abnormalities. He was kept nil by mouth, had a nasogastric tube inserted, commenced on intravenous fluids and broad-spectrum antibiotics, and was kept under close observation.

An upper gastrointestinal perforation was excluded by means of a Gastrograffin meal. Over the course of the next few days, his clinical condition improved with conservative management. However, his repeat chest films continued to show free gas under both his diaphragms, and we arranged for a computerized tomography (CT) scan of his abdomen and pelvis, with oral and intravenous contrast. This again confirmed the pneumoperitoneum and a few dilated small bowel loops. There was no extravasation of the contrast material into the peritoneal cavity (both small and large bowel loops were filled with the contrast agent) or any obvious point of obstruction.

On day 8 following his admission, he started vomiting feculant material, which prompted an urgent midline laparotomy. At operation, there was a small amount of turbid fluid in the peritoneal cavity and an area of near complete obstruction at the mid-part of the small bowel. At this location, there was also a localized collection of small bowel contents. Part of the wall of this collection was made up of the adjacent collapsed loops of small bowel and mesentery. On dissecting this area, the point of obstruction was a 2-3-cm area of circumferentially thickened small bowel, and there was a tiny perforation just proximal to this (Figure 1). Adjacent mesentery was thickened. The proximal bowel wall showed signs of chronic obstruction. The previous colostomy in the left iliac fossa was normal and there was no evidence of any recurrent cancer. As the intraoperative finding was suspicious of a primary small bowel malignancy, nearly 40 cm of the small bowel was resected with wide mesenteric clearance, and a side-to-side hand-sewn jejuno-jejunal anastomosis was carried in two layers. 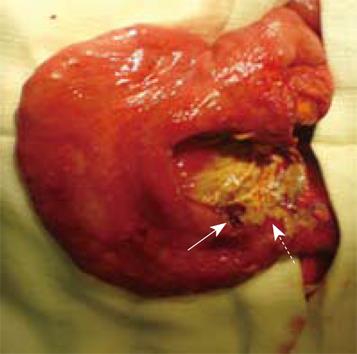 Postoperatively, the patient developed several complications, such as bilateral pneumonia, adult respiratory distress syndrome, paralytic ileus and renal failure. He unfortunately succumbed to these complications and died after a prolonged stay in the critical care unit.

The histopathological examination of the narrowed segment of the small bowel showed concentric fibrosis of the mesentery, serosa and outer part of the muscularis propria, with a slightly edematous mucosa. The fibrous tissue was arranged in lobules and was composed of fibroblast-like spindle cells arranged in a fascicular pattern. Sections through the thickened mesentery showed marked fibrocollagenous thickening, without fat necrosis or inflammation (Figure 2). No granulomas or foreign-body reaction were seen. The perforated area showed fibrinopurulent exudates, with no ulcers or other lesions. Immunohistochemistry of the young and collagenized fibrous tissue was positive for smooth muscle actin, vimentin and cytokeratin but negative for desmin, S100, CD117 and CD34. The overall appearance was that of fibrosing mesenteritis. 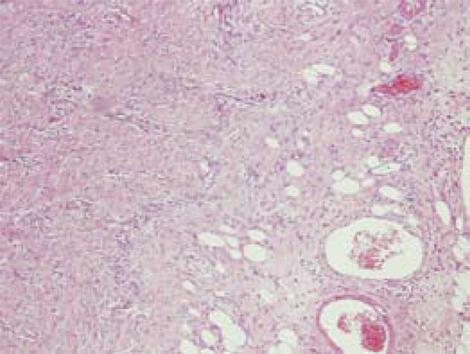 Figure 2 Histology of the specimen. Section through the mesentery, showing fibrocollagenous stroma with dilated vessels.
DISCUSSION

Sclerosing mesenteritis is a rare, idiopathic and benign disease of the abdominal mesentery first described by Jura in 1924[1–3]. It is defined as a mass that is found in the lining of the mesentery[4]. Currently, just over 300 cases have been published to date, with the majority being case reports and the rest being very small series.

In addition to sclerosing mesenteritis, other nomenclature has been used (Table 1). In histolo-pathological terms, the preferred terminology is sclerosing mesenteritis[7]. The different terminology used represents the different histological features found, despite the clinical entity being the same. This disorder has been linked with other idiopathic inflammatory disorders (Table 2).

The vast majority of cases of sclerosing mesenteritis are considered as idiopathic. Autoimmunity, ischemia, infection, vasculitis, Gardner’s syndrome, carcinoid, trauma and previous abdominal surgery have all been linked[139–11]. In the series of Daskalogiannaki et al[12], sclerosing mesenteritis was related to malignancy in 69% of patients. The association with malignancy may be coincidental or secondary to an autoimmune inflammatory reaction, the mechanism of which has not yet been elucidated. These malignancies included lymphoma, breast cancer, lung cancer, melanoma and colon cancer. In our case, previous surgery for rectal cancer may have been a causative factor, despite the fact that the surgery was a decade ago.

Mean age at presentation of sclerosing mesenteritis is in the fifth and sixth decades, and it is seen twice as frequently in males than females[1813]. The disease can present clinically as single or multiple masses, or as a diffuse thickening of the mesentery[127813]. The most common site of this disease is the small bowel mesentery. However, sole involvement of the mesocolon (the most common site being the rectosigmoid colon)[9] has been found in 20% of cases. Rare sites described are the mesoappendix, peripancreatic area, omentum and pelvis[479].

Clinical manifestations of this entity are non-specific. Patients may present asymptomatically with an incidental diagnosis. The various clinical features include abdominal pain, vomiting, diarrhea, constipation, anorexia, weight loss, fatigue, fever of unknown origin, ascites, pleural and pericardial effusion[2–47–91314]. In our case, the presentation was complex, with the patient presenting with pneumoperitoenum following a recent colonoscopy, which suggested an iatrogenic complication. In retrospect, he also had some features of small bowel obstruction. The combination of these made a preoperative diagnosis difficult.

Diagnosis of sclerosing mesenteritis may be complex and involves appropriate clinical and radiographic analysis. However, for a definitive diagnosis, biopsy and histological confirmation may be necessary. The main histological features are fat necrosis, chronic inflammation and fibrosis, which may all occur together, but there is a predominance of one of these features, as shown in Table 3. The histological diagnosis, as in our case, can be improved with immunohistochemistry techniques using smooth muscle actin, cytokeratin and vimentin[49].

Sclerosing mesenteritis has been best diagnosed radiologically with multidetector CT and magnetic resonance imaging (MRI). The two main CT features are the “fat-ring” sign (area of fat around the mesenteric vessels)[814–16] and the presence of a tumoral pseudocapsule[1278]. The other CT findings include changes of increased attenuation in the mesentery, low-attention foci representing fat necrosis and fibrosis, and development of a solid mass encasing the mesenteric vessel calcification in the center of the necrotic portion of the mass[81416]. The role of CT angiography is also helpful in delineating the relationship of the mass to the mesenteric vasculature. Despite our patient having a CT scan, there were no typical radiological features of this condition noted.

Ghanem et al[17] have recently described the role of MRI in finding a fibrous capsule in retractile mesenteritis. The role of fluorine-18 fluorodexoyglucose positron emission tomography has also been reported in the literature as a new and upcoming image modality in the detection of sclerosing mesenteritis[15].

Management of sclerosing mesenteritis is dependent on the stage and hence histological findings of the disease (Table 3). In the early stages, when fat necrosis is the main feature, it tends to settle spontaneously without treatment. As the disease progresses and chronic inflammation predominates with undeveloped fibrosis, various agents have been used alone or in combination. The role of early treatment with cyclophosphamide has been reported in two cases with promising results, without signs of recurrence[18]. A single case study has shown the positive effect of the combination of corticosteroids and azathioprine[19]. Cuff et al[3] and Genereau et al[20] have demonstrated the effective management of colchicines, together with corticosteroid, in a series of symptomatic patients. In the final stages, when fibrosis overshadows the fat necrosis and chronic inflammation, surgical intervention, which includes partial resection, bypass, and colostomy may become necessary. Overall, surgical treatment should be limited to establishing a diagnosis or treatment of complications[37]. In our patient, the complications of small bowel obstruction and a localized perforation occurred, which required resection. It is worthy of note that the intraoperative findings can mimic a malignant process as highlighted in the report by Mathew et al[2]. Despite the fact that our patient succumbed to his postoperative complications, the overall prognosis published in the literature is favorable for this condition.

Our case illustrates that the diagnosis of sclerosing mesenteritis can be difficult to make preoperatively, especially when other procedures, such as colonoscopy, have been carried out recently, which by itself has the risk of causing iatrogenic perforation. The presentation and management of this condition can be varied and this depends upon the underlying stage of the histological process.