AIM: To clarify the expression and role of Ephrin receptor A4 (EphA4) in gastric cancer in relation to clinicopathological characteristics and the expression of fibroblast growth factor receptor 1 (FGFR1) and ephrin ligands.

CONCLUSION: Our results suggest that overexpression of EphA4 plays a role in gastric cancer.

Figure 1 RT-PCR analysis of the EphA4 and FGFR1 in gastric cancer cell lines. 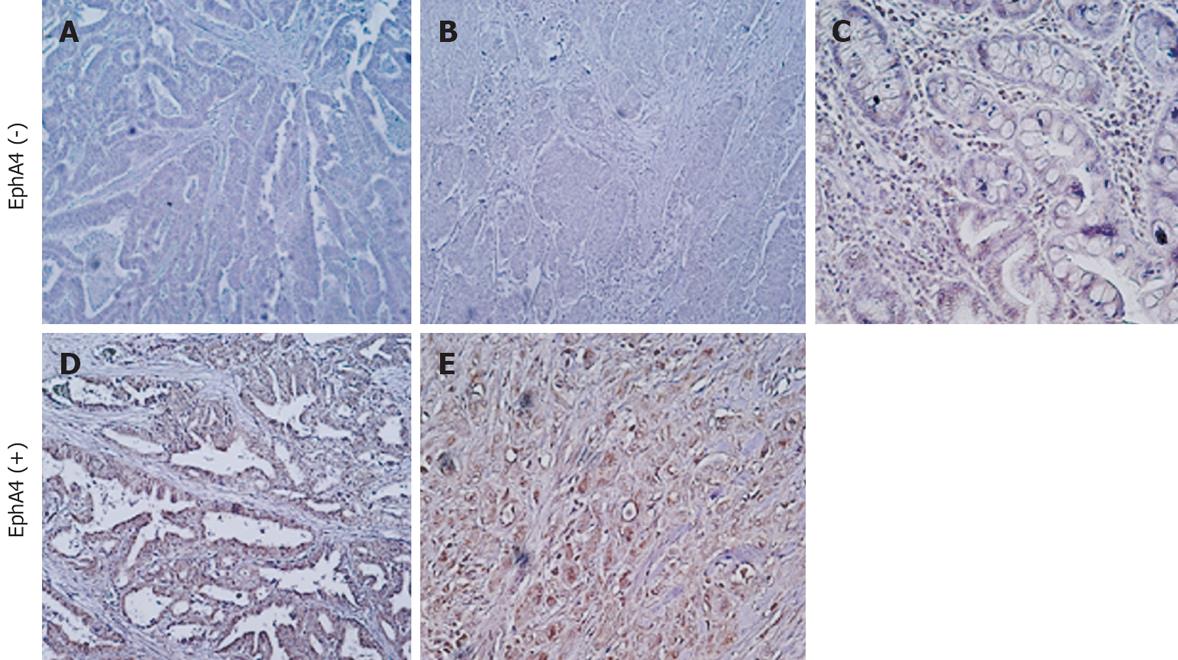 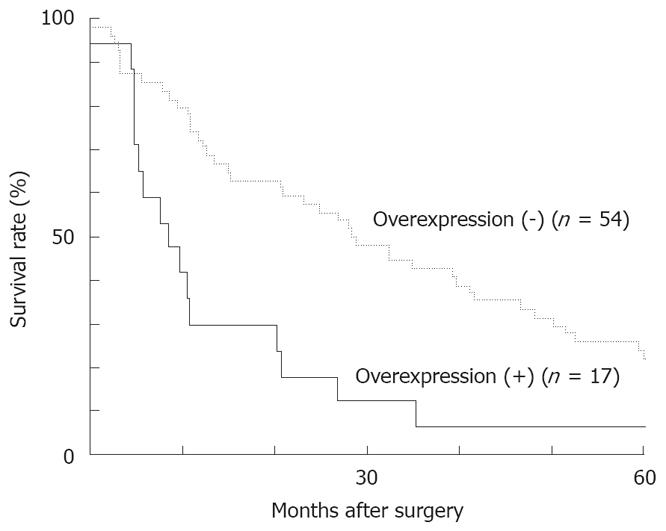 Figure 4 Kaplan-Meier survival curves of patients with gastric cancer according to the expression of EphA4 (P = 0. 0008).

Gastric cancer is the fourth most common cancer and the second leading cause of cancer-related death in the world[1]. Genetic and epigenetic alterations play important roles in the development and progression of gastric cancer[1,2]. Considerable attention has been given to the potential role of tyrosine kinases in gastric cancer[3-6].

The potential role of Eph receptor and ephrin ligand family in human cancer is receiving increasing attention. Altered expression patterns of Eph/ephrin have been correlated with tumor behavior, such as invasiveness, vascularization, metastatic potential, and patients' prognosis[7-10]. Generally, the upregulation of Eph/ephrin has been reported in various types of cancer[7-10]. Overexpression of EphB2, ephrinB1, EphA2, and ephrinA1 has been reported in gastric cancer[11-13]. On the other hand, the concept that Eph receptors are oncogenes needs a new look on the basis of recent findings of downregulation of Eph receptors in certain types of cancer[14-17]. However, because functions of Eph receptors can overlap, loss of one receptor can be partially compensated for by other Eph receptors that have similar ligand-binding specificities and expression patterns[7].

Thus, it seems important to characterize the role of Eph/ephrin with specific characteristics. In this regard, EphA4 is an engaging target for research. Compared with other Eph receptors, EphA4 is distinguished by its ability to bind to both type A ephrins and most type B ephrins[7-10]. Indeed, overexpression of EphA4 has been recently reported in human prostate and pancreatic cancers[18,19]. Moreover, it has been reported that EphA4 forms a hetero receptor complex with fibroblast growth factor receptor (FGFR) 1 and that EphA4/FGFR1 complex potentiates FGFR-mediated downstream signal transduction. It is well known that FGFR signal pathway plays important roles in gastric cancer[20,21].

Five mm-thick sections of formalin-fixed and paraffin-embedded tissue and TMA were dewaxed in xylene and rehydrated in alcohol. The sections were then heated to 105°C in target retrieval solution (DakoCytomation, Carpinteria, CA) in an autoclave for 10 min for antigen retrieval. Endogenous peroxidase activity was suppressed using a solution of 3% hydrogen peroxide in methanol for 5 min. After being rinsed twice in phosphate-buffered saline (PBS), the sections were incubated for 18 h at 4°C with a rabbit anti-EphA4 polyclonal antibody (Santa Cruz, CA, USA) or a mouse anti-FGFR1 monoclonal antibody (Abcam, Cambridge, UK). The antibodies were diluted in antibody diluent with background reducing components (0.05 mol/L Tris-HCl buffer containing 0.1% Tween and 0.015 mol/L sodium azide, DakoCytomation). Normal rabbit or mouse immunoglobulins were substituted for each primary antibody as negative controls. After washing 3 times in PBS, the sections were treated with biotinylated goat anti-rabbit or anti-mouse immunoglobulin (DakoCytomation) for 10 min and then with horseradish peroxidase-avidin complex, diluted as recommended by the manufacturer, for 10 min. The slides were then washed in PBS and developed in 0.05 mol/L Tris-HCl (pH 7.5) containing 0.6 mg/mL 3-3' diaminobenzidine at room temperature. The sections were counterstained in Mayer's hematoxylin and mounted.

The results were assessed for associations with clinico-pathological parameters using the following statistical tests: Student's t test for age, the Mann-Whitney test for depth of invasion, lymph node metastasis, and pTNM stage, and the Chi-square test or Fisher's exact test for the remaining parameters. Survival analysis was carried out for 71 patients (pTNM stages were as follows: 14 stageIcancers; 24 stage II cancers and 33 stage III cancers). Since information on preoperative and postoperative treatment was not available for 55 specimens spotted on TMA, these patients were not involved in survival analysis. Cumulative survival rates were calculated by the Kaplan-Meier method. The difference between survival curves was analyzed by the logrank test. Multivariate analysis was performed using Cox's proportional hazard model. A P value of less than 0.05 was considered significant.

Overexpression of EphA4 and FGFR1 mRNA in gastric cancer tissues

Immunohistochemical expression of EphA4 and FGFR1 in gastric cancer tissues

Figure 3 shows representative results of immuno-histochemistry for EphA4 in gastric cancer tissues. The EphA4 protein was strongly expressed in the cytoplasm and/or membrane of cancer cells, whereas normal gastric epithelium from the same patient showed no, or very weak, expression of EphA4 protein. There was no detectable immunoreactivity with the control normal rabbit immunoglobulins (data not shown). EphA4 expression was positive in 62 (48%) of the 129 cases. EphA4 overexpression was confirmed in those cases in which EphA4 mRNA overexpression was shown by using RT-PCR. The relationship between EphA4 positivity and clinicopathological characteristics was then analyzed. EphA4 positivity was significantly associated with depth of invasion and recurrence. Moreover, patients with EphA4-positive cancer had significantly shorter overall survival periods than did those with EphA4-negative cancer (P = 0.0008, Figure 4). Multivariate analysis, including EphA4 expression, depth of invasion, lymph node metastasis, and vascular invasion, showed that EphA4 expression was an independent marker of poor survival for gastric cancer (relative risk 2.1, 95% confidence interval 1.0-4.2, P = 0.038).

Cell growth assay after treatment with specific siRNA for EphA4 gene was done to assess the role of EphA4 expression in gastric cancer cells. Transfection with siRNA resulted in over 80% inhibition of mRNA expression (data not shown). Transfection with EphA4-specific siRNA significantly suppressed cell growth of SNU638 and AZ521cells compared with control siRNA-transfected counterparts (P = 0.008; data not shown).

Taken together, these results suggest that EphA4 overexpression plays a role in gastric cancer. As a target gene for molecular therapy, its expression in normal adult tissues is important. Although EphA4 was found to be highly expressed in the adult brain, it has been thought that therapeutic antibody targeting membrane molecules could not pass through the blood brain barrier and were unlikely to affect the central nervous system[18]. Considering the expression pattern of EphA4 together with its oncogenic function, EphA4 could be a target for molecular therapy by a therapeutic antibody and/or by small molecule approach targeting its kinase activities[24].

The Ephrin (Eph) receptors constitute the largest family of tyrosine kinase receptors. EphA4 is distinguished by its ability to bind to both type A ephrins and most type B ephrins. It has been reported that EphA4 forms a hetero receptor complex with fibroblast growth factor receptor (FGFR) 1 and that the EphA4/FGFR1 complex potentiates FGFR-mediated downstream signal transduction. The potential role of Eph receptor and ephrin ligand family in human cancer is receiving increasing attention.

Altered expression patterns of Eph/ephrin have been correlated with tumor behavior, such as invasiveness, vascularization, metastatic potential, and patients’ prognosis. Generally, the upregulation of Eph/ephrin has been reported in various types of cancer.

The expression profiles of EphA4, FGFR1, and ephrins were systematically analyzed in gastric cancer cell lines and/or tissues by using RT-PCR, immunohistochemistry, and tissue microarray analysis.

This study demonstrated that overexpression of EphA4 and FGFR1 may be involved in gastric tumorigenesis. EphA4 overexpression could be a poor prognostic marker for gastric cancer.

Ephrin receptor: The Ephrin receptors constitute the largest family of tyrosine kinase receptors. The Eph receptors interact with a second family of cell surface-anchored ligands, ephrins. Eight EphA receptors (EphA1-A8) and five EphB receptors (EphB1-B4, B6) are known in the human genome. Ephrin: The ephrins are divided into the two subclasses, A and B. Type A ephrins and type B ephrins are attached to plasma membrane via glycosyl phosphatidyl inositol linkages and transmembrane sequences, respectively. Five type A ephrins (Ephrin A1-A5) and three type B ephrins (Ephrin B1-B3) are known in the human genome.