AIM: To examine the possible role of the Epstein-Barr Virus (EBV) in the development of gastric adenocarcinoma (GC). It is unclear whether EBV is involved in GC development or is a consequence of gastric inflammation secondary to immunosuppressive treatments.

METHODS: A systematic review was carried out of all published observational studies on the temporal association between EBV and GC, with a view to determine a causal relationship.

RESULTS: The present study showed that the worldwide crude prevalence of EBV in gastric adenocarcinoma was 8.29%. The prevalence varied from 7.08% for intestinal type and 9.82% for diffuse type of GC. It was observed that Western and Central Asian countries had a significantly higher frequency of EBV positive cases compared to South-Eastern countries. America had the highest EBV-GC prevalence whereas Europe had the lowest.

CONCLUSION: The present review has demonstrated a high prevalence of EBV in gastric adenocarcinoma. However, studies designed to assess a temporal relationship and histological association using sensitive techniques should be carried out to establish the role of EBV in GC carcinogenesis.

Gastric adenocarcinoma (GC) is the second most common cause of cancer-related mortality and a major public health problem worldwide[1]. GC has a distinct geographical distribution with the highest incidence rates in Asia and South America and the lowest incidence in western countries[1–3].

The Epstein-Barr virus (EBV) is a ubiquitous virus, with carcinogenic properties, which has been linked to the development of several malignancies including nasopharyngeal carcinoma and Burkitt’s lymphoma[4]. It has been estimated that over 90% of the population worldwide has been exposed to EBV, although, not all infected individuals develop EBV-related disease[4]. After infection, EBV remains in a latent state in B-cell lymphocytes, at a rate of 1 in 106 circulating cells. The reason why it is difficult to identify EBV is perhaps due to the fact that expression of only a small number of viral proteins allows the maintenance and control of cell proliferation[56].

EBV is a common co-infection in several diseases and some authors have suggested that it may represent a late event in the GC carcinogenesis, after H pylori infection[7]. However, there is lack of specific information implicating EBV in the pathogenesis of GC. The worldwide occurrence of EBV positive GC is estimated at >50 000 cases/year, although, it remains unclear whether the presence of EBV is the cause or a consequence of GC[8].

Therefore, we carried out a systematic analysis of all observational studies on EBV and GC with a view to assess a possible temporal and statistical association.

All original published studies in English, French, Spanish and Portuguese on EBV infection and gastric carcinoma were included in the analysis (n = 494). Studies were excluded for the following reasons (Figure 1): studies referring to other types of cancer (n = 140); use of languages such as Russian, Chinese, Japanese or Italian (n = 30); articles other than those containing research data, such as reviews, letters to the editor and case-reports (n = 155); in vitro and in vivo experiments (n = 81); and studies referring to histological types other than gastric adenocarcinoma (n = 44). 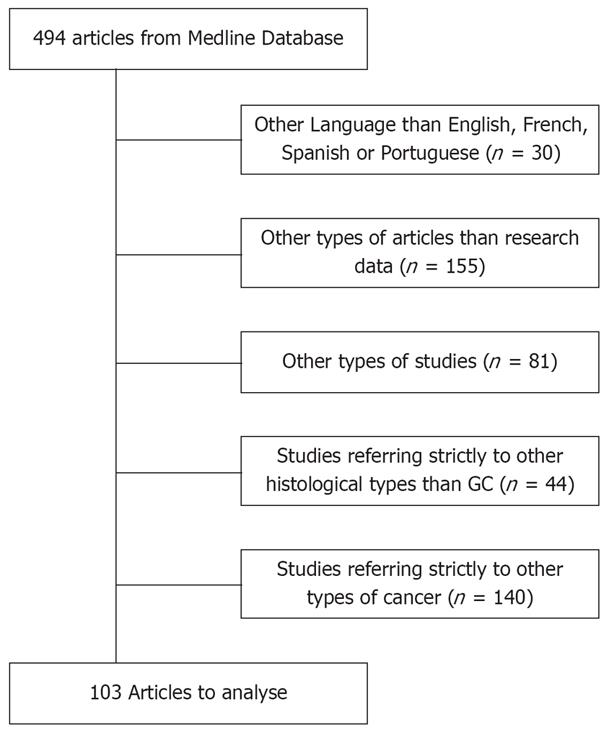 The studies included in the present analysis (n = 103) were reviewed by all the authors, in order to obtain the necessary information, such as: design of study (case-control or retrospective), source of tissue sample (formalin embedded tissues, fresh tissues or peripheral blood samples), study population, geographical distribution, histological type of the lesion and EBV diagnostic methodology (in situ hybridization, Polymerase Chain Reaction, immunohistochemistry and PCR followed by Enzyme Linked Immunoassay). Pooled frequencies were estimated by country, region and continent and were adjusted for the type of cancer, sample source and EBV diagnostic methodology.

The study samples comprised of the following: 92 studies were conducted on formalin embedded tissues, 10 on fresh tissues and one on peripheral blood samples.

The most common methodology used for the diagnosis of EBV was In Situ Hybridization (ISH) for EBER1 (n = 88), followed by Polymerase Chain Reaction (PCR) for the BamHI-W region of EBV (n = 6), PCR for EBNA1 (n = 3), immuno-histochemistry for LMP1 (n = 2), PCR followed by Enzyme Immunoassay (PCR-EIA) for BamHI-W, and ISH for BamHI-W in one study each. In two studies, it was not possible to determine the methodology used for EBV detection.

The largest sample size for gastric adenocarcinoma was obtained from South-east Asia (28 760 cases), followed by Central Europe (1938 cases) and South America (927 cases). With respect to the intestinal and diffuse types of GC, the largest sample was from South-east Asia (6290 and 4665 cases respectively), followed by South America (503 and 381 studies respectively) and Central Europe (325 and 154 studies, respectively).

As a Group I carcinogenic agent, EBV has been intensively studied over the past 40 years[9]. It has been demonstrated consistently that EBV has an association with nearly 100% of gastric lymphoepithelioma-like carcinomas[10–12], which are believed to have similar pathogenic mechanism as nasopharyngeal carcinoma[7].

Despite the presence of several hundred published studies demonstrating an association between EBV and GC, the pathogenic role of EBV in gastric carcinogenesis remains to be established[7]. Nevertheless, there is strong evidence to directly implicate EBV in GC development: presence of EBV in all cancer cells detected by in situ hybridization of EBER1, but not in the surrounding epithelial cells[13]; monoclonality of the viruses in neoplastic cells as judged by the analysis of single terminal repeats of EBV DNA[14]; and elevation of immunoglobulin A and B antibodies against viral capsid antigen several months before the clinical presentation of the disease[15].

The pathogenic mechanism of EBV-GC is not well understood. EBV is transmitted through the saliva, and primary infection occurs at the oropharyngeal mucosa, with the involvement of the Waldeyer’s ring followed by infection of naive B-cells as they circulate near the infected cells[16]. After infection, EBV establishes a persistent state in the B-cells, and is maintained ad eternum. From time to time, the infected B-cells become activated as a result of immune suppression of the host, and the infected cells are able to enter other tissues[16]. Since the main receptor (CD21/CR2, the receptor for the C3d component of complement) for EBV is normally absent from gastric epithelial cells[1718], EBV infection has been suggested to be accomplished by the binding of EBV particles with IgA antibodies which are then engaged by gastric epithelial cells[719]. Once inside the gastric cells, EBV activates its latency state by expressing latency proteins which induce cell proliferation and viral maintenance. Recent studies have shown that in gastric carcinoma, EBV expresses a different pattern of proteins than those seen in Burkitt’s lymphoma and nasopharyngeal carcinoma, suggesting a different oncogenic mechanism in gastric carcinoma[2021].

The development of gastric carcinoma is a multistep event, progressing from normal to preneoplastic lesions to highly malignant tumours[20]. Despite strong evidence implicating H pylori as the main etiological factor for GC development, several other environmental and genetic co-factors have been reported[22]. At present, it is generally accepted that EBV infects gastric cells depending on a permissive environment and a genetically susceptibility host, upon an inflammatory state of gastric epithelium, which is in agreement with the findings that EBV-GC are monoclonal tumours[22]. Moreover, there are clinico-pathological features that are seen consistently in EBV-GC, such as: higher prevalence in males, with no impact on stromal invasion or survival[111223]; tumour histology varying from moderately differentiated tubular to poorly differentiated solid type[1724–29]; and a predisposition for the upper two-thirds of the stomach.

By performing a systematic review of all published studies worldwide, we have attempted to analyze the role of EBV in GC development, by estimating and comparing the worldwide occurrence of EBV-GC and by elucidating their temporal relationship and statistical association.

Our study included 103 published reports from 21 different countries distributed over 3 continents (Europe, Asia and America). Gastric adenocarcinoma is the second most common cause of cancer-related mortality worldwide and is the 14th overall cause of death[2]. Worldwide, there are widespread differences in gastric cancer rates, with the highest rates seen in Japan, China and South America, and much lower rates in Western Europe and the United States[222]. As expected, the great majority of studies were conducted in Asian countries, with 80 general reports on EBV and gastric adenocarcinoma, 20 on diffuse type and 21 on intestinal type of GC. The crude frequency of EBV positive cases in Asian countries was 8.07%, 9.13% and 6.73% for GC, diffuse type and intestinal type, respectively. Moreover, western and central Asian countries had significantly higher frequency of EBV positive cases than south-eastern countries.

Despite these studies, the exact association between EBV and GC remains to be established. Moreover, recent data reinforces the importance of the differences in the association of EBV with gastric carcinoma among different ethnic communities[3031], with respect to temporal relationship, histological association and the application of sensitive methodologies for EBV diagnosis in GC. Nevertheless, the present review emphasizes the need for further studies designed to elucidate EBV-GC carcinogenesis model.

Gastric adenocarcinoma is a major public health problem worldwide. Epstein-Barr Virus (EBV) infects over 90% of population worldwide and has been linked as a late event in the gastric carcinogenesis process, after H pylori infection.

Despite evidence to suggest the existence of biological plausibility, there is lack of information about the role of EBV in gastric cancer, either as a risk factor for the development of cancer or as a predictive marker for major outcomes after medical therapy.

Differences in EBV prevalence may provide further insight into research on gastric carcinogenesis and the natural history of this disease.

The present study is relevant as it emphasizes the lack of prospective studies and the absence of methodologies that can discriminate past from current viral infection. The focus of research and clinical application may become relevant in future studies.

The Ministry of Health for the research, 2005