Rupture of hepatocellular carcinoma (HCC) is a life-threatening complication. Peritoneal metastasis of HCC after spontaneous rupture was seldom noted. We report a case of intraperitoneal metastasis of HCC after spontaneous rupture. A previously asymptomatic 72-year-old man was admitted due to dull abdominal pain with abdominal fullness. He had a history of HCC rupture 10 mo ago and transarterial embolization was performed at that time. Abdominal computer tomography (CT) scan showed a huge peritoneal mass over the right upper quadrant area. Surgical resection was arranged and subsequent microscopic examination confirmed a diagnosis of moderately-differentiated HCC.

Hepatocellular carcinoma (HCC) is one of the most common malignancies worldwide. It is usually manifested in the 6th and 7th decades of life. Extrahepatic metastases are seen in 64% of patients with HCC. The most frequent sites of extrahepatic metastases are lung, abdominal lymph node and bone, but peritoneal dissemination is unusual[12]. The incidence of spontaneous rupture of HCC is about 8%-26% in Asia[3–5] and the mortality rate of HCC patients is 10%[6]. However, peritoneal metastasis of HCC after spontaneous rupture is seldom noted. Here, we report a case of intraperitoneal metastasis of HCC after spontaneous rupture 10 mo ago, which was treated with transarterial embolization.

A previously asymptomatic 72-year-old man had a history of chronic hepatitis C- related liver cirrhosis without regular follow-up. Sudden nausea and vomiting with watery diarrhea were noted on January 2006. Then he was sent to Yun-Lin Branch of National Taiwan University Hospital for help. Abdominal computer tomography (CT) scan showed a huge HCC that was suspicious of rupture. Under the request of his family, he was transferred to our hospital and transarterial embolization was performed on January 31, 2006. After discharge, he was regularly followed up at our Gastrointestinal (GI) Outpatient Department (OPD). Dull abdominal pain over the right upper quadrant area, accompanied with fullness sensation, was noted in November 2006. Besides, he also had body weight loss of about ten kilograms in one year. So he visited our hospital again. Abdominal CT scan revealed a peritoneal mass in the right upper quadrant peritoneal area and hepatoma recurrence was considered (Figure 1). Transarterial embolization was arranged again, but failed. After consultation with the surgeon, he was admitted for surgical resection.

Figure 1 A well-defined mass about 10 cm in diameter in RUQ peritoneal cavity anterior to liver parenchyma.

Surgical intervention was arranged on January 24, 2007. Operative methods were segmental hepatectomy (S6 and partial S5), excision of extrahepatic tumor, and cholecystectomy. The operation showed a huge tumor (12 cm × 8 cm × 6 cm) over the right upper quadrant area just below liver parenchyma (Figure 2) with its blood supplied from the omentum. Besides, two small mass lesions (3 cm × 2 cm and 2 cm × 1 cm) were found over S5 and S6, respectively (Figure 3). Microscopy showed that the huge extrahepatic tumor and two intrahepatic lesions were moderately differentiated. 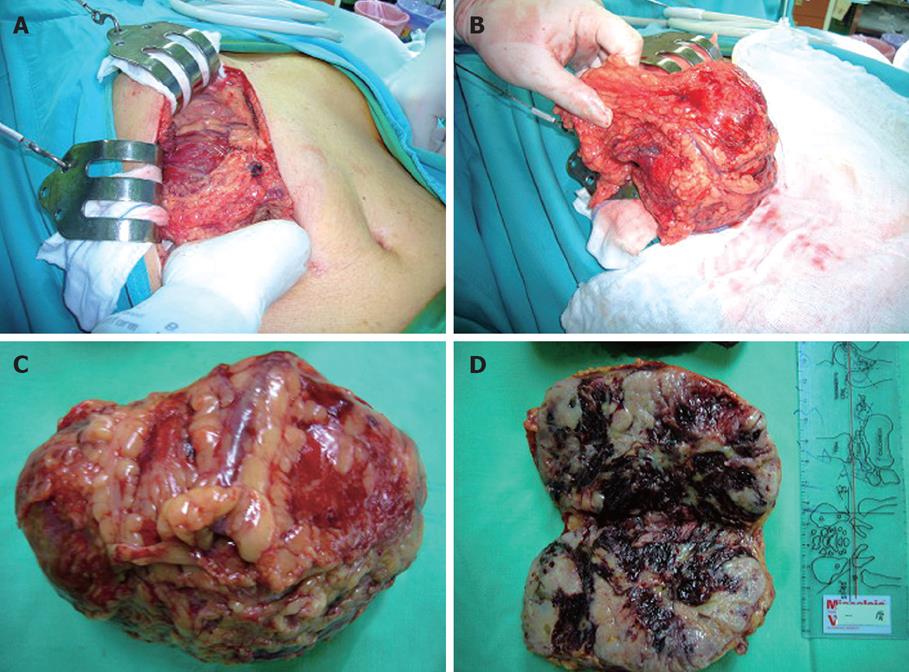 Intraperitoneal metastasis of non-ruptured HCC is rare, but the risk of such a metastasis of ruptured HCC increases[7]. The mechanism of spontaneous rupture of HCC is not exactly clear. Hypotheses include rapid expansion of the tumor and central necrosis, venous hypertension caused by venous obstruction due to direct tumor invasion, mild trauma or compression by the diaphragm associated with respiratory movement, coagulopathies such as thrombocytopenia and disturbed prothrombin synthesis, and vascular injury leading to hemorrhage and subsequent rupture[48–10]. Recently, Zhu et al postulated that the poor function of macrophage phagocytosis could result in cumulation of immune complex and deposition on vascular wall. Then vascular wall could become stiff and weak due to the proliferated fragment elastin and damaged collagen, which would make blood vessels more prone to splitting and result in hemorrhage and rupture of HCC[1112]. Large tumor size, peripheral location and protruding contour are all associated with an increased risk for rupture of HCC[41314].

The diagnosis of HCC rupture is based on blood-stained ascites plus imaging studies and symptoms[2]. The most common symptom is sudden onset of abdominal pain (66%-100%)[615–17]. Yeh et al also found that the presence of sudden-onset abdominal pain is the only independent indicator of ruptured HCC[18]. Abdominal ultrasonography and computed tomography improve the rate of preoperative diagnosis[13141920]. Peripheral location, protruding contour, discontinuity of hepatic surface, surrounding hematoma and elevated ascitic CT number are helpful signs for the diagnosis of ruptured HCC. In addition, enucleation sign on helical CT could be more specific[142021].

Treatment of ruptured HCC is primarily aimed at controlling hemorrhage and preserving the functional liver parenchyma as possible. Open surgical method was the mainstay of treatment during 1960s-1980s. It was reported that various surgical procedures, including perihepatic packing, suture plication of bleeding tumors, injection of alcohol, hepatic artery ligation (HAL), and liver resection, are effective against hemostasis[1022–26]. Besides transarterial embolization (TAE) and transarterial chemoembolization (TACE) for palliative treatment in patients with unresectable HCC, TAE is also gradually used for hemostasis in spontaneous rupture of HCC. In addition, Ng et al[27] also reported that ruptured HCC could be treated with radiofrequency ablation as a salvage procedure. To our knowledge, no prospective randomized controlled trials have found the best method for hemostasis. There is evidence that TACE is the preferred method to arrest tumor bleeding[1328–34]. Besides, two-stage hepatectomy is advisable because it can prolong the survival of selected patients[35–40]. Figure 4 is the logarithm about how to approach the patients with spontaneous ruptured HCC[35–40]. 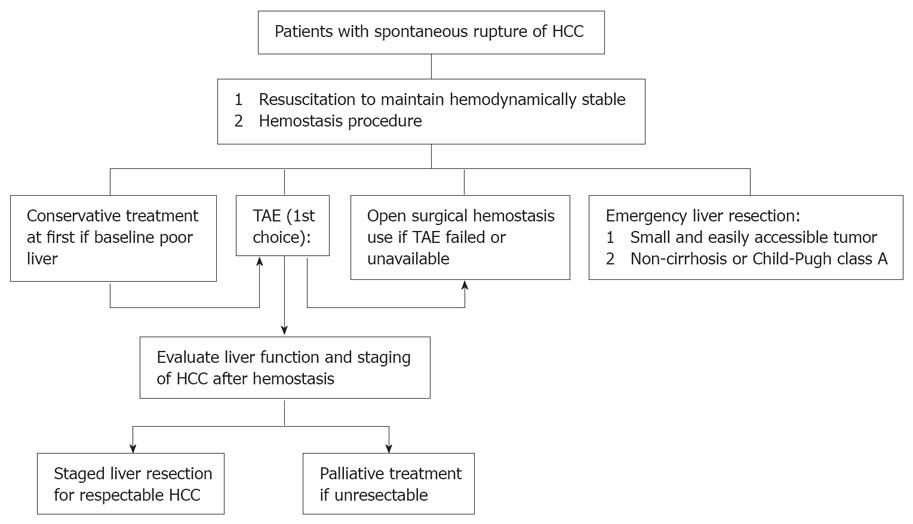 Figure 4 Logarithm about how to approach to the patient with spontaneously ruptured HCC.

Spontaneous rupture of HCC with intraperitoneal hemorrhage is a life-threatening complication with a high mortality rate. Prognosis is associated with poor liver reserve, advanced disease and severity of hemorrhage[41]. The median survival time is around 4-5 mo after HCC rupture, and only few patients can have a long-term survival[4243]. Thus, implanted metastases usually do not become clinically apparent. Ong et al[44] reported the first case of peritoneal metastasis after HCC rupture in 1996 and then only sporadic case reports have been published. Most reported cases of peritoneal metastases are documented 8 mo after rupture[74145–47], but Ryu et al[48] and Lin et al[49] reported that peritoneal metastasis can be found 4 and 3 mo respectively after rupture episode. A single metastatic tumor is the most common presentation. Resection is the treatment of choice for peritoneal metastasis if possible and might offer long-term survival benefits[744–48].