CONCLUSION: CagA-positive filtrates enhance the changes in morphology and growth characteristics of human gastric epithelial tumor cells. DNA damage maybe one of the mechanisms involved in the growth changes.

Infection with the gastric bacterium Helicobacter pylori (H pylori) the causative agent of chronic gastritis is associated with an increased risk of developing gastric cancer[1–6]. The international agency for research on cancer has classified H pylori as a type I carcinogen[7–10]. A number of studies have pointed to a link between carriage of CagA+ strains and an increased risk of gastric cancer[11–13]. The mechanism by which H pylori promotes the development of gastric cancer is presently unclear. Studies have shown that CagA can bind to other signaling molecules, such as SHP2, GRB2, c-MET and phospholipase C to promote gastric carcinogenesis[14–19], which depends on a type IV secretion system to translocate CagA into host cells.

H pylori was grown in Brucella broth, supplemented with 5% fetal calf serum (Gibco, Grand Island, NY, USA), for 24-36 h at 37°C in a thermostatic shaker under microaerophilic conditions. As described by Sommi et al[20], when bacterial suspensions reached A450 1.2 (corresponding to a bacterial concentration of 5 × 108 CFU/mL), to obtain the H pylori culture filtrate, we then removed bacteria by centrifugation (12 00 g for 10 min) and sterilized the supernatants by passage through a 0.22 &mgrm cellulose acetate filters (Nalge, Rochester, NY, USA). Uninoculated broth filtrate served as a blank control. To remove ammonia, we dialyzed control and culture filtrates against Hanks’ balanced salt solution for 36 h in dialysis tubing, with a 12 kDa molecular mass cutoff (Sigma, St. Louis, MO, USA). The presence of CagA in the culture filtrates was tested by means of SDS-PAGE, followed by Western blotting[2122]. Total protein content was determined by measuring A280. The conditioned broth was stored at -70°C until use. There were three groups: CagA+, CagA- and blank control.

The effect of culture filtrate on endothelial cell proliferation was determined by MTT assay (Sigma). Briefly, GES-1 cells were plated in 24-well plates and cultured overnight in growth medium for 1 mo. 2.5 × 104 cells were inoculated in three groups: CagA+, CagA-and blank control. The viable cells were quantified by, MTT assay at 1-7 d, following the manufacturer’s instructions.

The gastric epithelial cells in logarithmic phase were digested to produce single-cell suspension by 0.25% tryptase. Five hundred cells were dispersed in a culture dish (diameter 60 mm); culture medium was added, and the cells were cultured for 2 wk. When clones were visible, the supernatant was removed, and fixed in methanol for 15 min. The samples were stained with 0.4% crystal violet for 20 min, rinsed in water, air dried, and the number of clones that contained above 50 cells was calculated, according to the formula: cloning rate = average clone number/500 × 100%.

For analysis of DNA content, cells treated with different H pylori culture broths were harvested after 72 h and fixed with 70% cold ethanol for 4 h. The apoptosis rate was detected by flow cytometry (FACSalibur, BD Biosciences). Briefly, 1 × 106 cells/mL were suspended in 0.2% triton X-100/PBS solution containing 1 g/L ribonuclease A. After incubation for 20 min, DNA was stained with 50 mg/L propidium iodide. Flow cytometry was performed to determine the apoptosis rate.

The alkaline comet assay in single-cell suspensions was performed according to the method of Singh et al[23], with some modifications[24]. Briefly, 15 &mgrL of the single cell suspension (2 × 104 cells) was embedded in 0.5% low-melting-point agarose (Sigma) and spread on agarose-precoated microscope slides. Slides were immersed overnight at 4°C in freshly prepared cold lysis solution [2.5 mol/L NaCl, 100 mmol/L EDTA, 10 mmol/L Tris, 1% sodium salt N-lauryl sarcosine (pH 10), with 1% triton X-100, and 10% DMSO added fresh; all supplied by Sigma]. Subsequently, the cells were exposed to alkaline buffer (1 mmol/L EDTA and 300 mmol/L NaOH, pH 13.4) at 4°C for 40 min, to allow DNA unwinding, and expression of alkali-labile sites. In the same solution, electrophoresis was conducted at 4°C for 20 min, at 25 V and 300 mA. After electrophoresis, the slides were neutralized (0.4 mol/L Tris, pH 7.5), stained with 40 &mgrL ethidium bromide (EtBr) (20 &mgrg/mL), and analyzed with a fluorescence microscope (Axioplan II; Zeiss, Oberkochen, Germany), under green light at 400 nm, using an image analysis system (Comet Assay II; Perceptive Instruments, Suffolk, UK). Two hundred randomly selected cells (100 from each of two replicate slides) were evaluated from each sample, and the mean of the tail moment was determined. Tail moment according to Comet Assay II is defined as ‘‘the product of DNA in the tail, and the mean distance of migration in the tail. It is calculated by multiplying tail intensity/sum of comet intensity by tail center of gravity minus peak position.’’ Using this method, the extent of DNA migration is related to the level of DNA damage in each cell, which creates the comet tail images.

Gastric epithelial cells treated continuously for 1 mo were collected and digested by 0.25% tryptase to yield a cell suspension, centrifuged at 1000 g for 10 min. The supernatant was removed, and the precipitate was fixed with 5% glutaraldehyde. Ultrathin sections were cut and observed under an electron microscope (H-600, Hitachi, Japan).

All data were expressed as mean ± SE. SPSS 10.0 software was used for one-way analysis of variance and q test. P < 0.05 was considered statistically significant.

CagA expression was detected in the CagA+, CagA- and control groups. GES-1 cells proliferated actively when treated by CagA and H pylori culture filtrates. There were significant differences between the two groups (Figure 1). 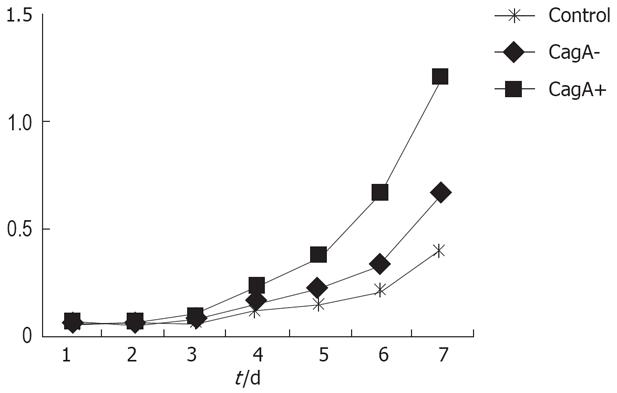 After treatment with H pylori culture filtrates, the flat clone formation test in the CagA+ group showed that the GES-1 clone number was larger than that of the CagA-, and control groups (200 vs 88.12, P = 0.005). The clone formation rates were 40%, 17.6% and 2.4%, respectively. Statistical analysis revealed a significant difference between the CagA+ and CagA- groups.

Flow cytometry showed that the number of S-phase cells increased more in the CagA+ group than in the control group at 1, 3 and 6 d (33.03% vs 9.16%, 53.46% vs 6.83%, and 35.55% vs 8.10%, respectively), which was higher than in the CagA-group (P = 0.034). After GES-1 cells had been treated with different H pylori culture filtrates for 1 mo, the detection of apoptotic cells was carried out by flow cytometry, and repeated eight times. The mean percentage of hypodiploid cells in the CagA+, CagA- and control cells was 5.6%, 4.4% and 3.7%, respectively. Statistical analysis revealed no significant difference among the three groups (Figure 2). 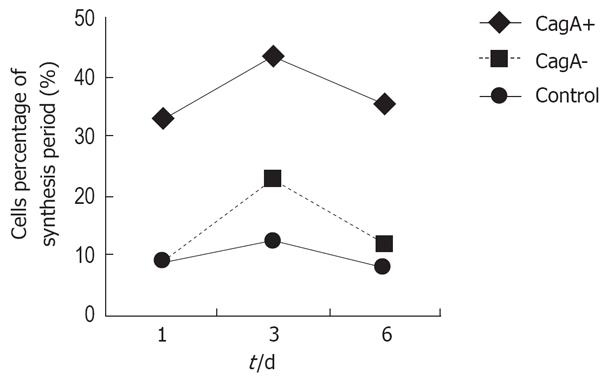 Infection with strains of H pylori that carry the CagA-gene is associated with gastric carcinoma. The mechanism is still not clear. Recent studies have shown that the CagA-gene product is delivered to gastric epithelial cells by the bacterial type IV secretion system to deregulate the SHP2 oncoprotein, which can promote gastric carcinogenesis[14–19].

In the present study, we prepared different H pylori culture filtrates containing the CagA protein to treat gastric epithelial cells. We found that GES-1 cells, after being treated with CagA-gene-positive culture filtrates, showed dyskaryosis, nucleolar hypertrophy and karyokinesis. The growth curve showed that GES-1 cells proliferated actively, and colony formation reached 40%. The number of S-phase cells obviously increased compared to the controls. These results demonstrate that CagA+ filtrates of H pylori can induce carcinogenesis in gastric epithelial cells. Research has shown that reconstruction of CagA fragment induces paraplastic changes in epithelial cells in vitro, which supports the suggestion that CagA is involved in gastric carcinogenesis[2021]. All these results support our findings.

Ladeira et al[25] have used the comet assay or single-cell gel electrophoresis to investigate the status of DNA damage in gastric epithelial cells from the antrum and corpus in patients with H pylori infection, and gastritis of varying degrees. They have demonstrated that the level of DNA damage in H pylori-infected individuals is significantly higher than that in non-infected individuals, with the levels of DNA damage significantly higher in those aged ≥ 50 years.

The DNA repair enzyme human oxoguanine glycosylase 1 (hOGG1) is known to be responsible for the repair of the 8-hydroxy-deoxyguanosine (8-OHdG) region. Of the hOGG1 polymorphisms identified, a Ser→Cys polymorphism at position 326 has been found to interact with atrophic gastritis, but not with antioxidant dietary or nutrient intakes. It is likely that this makes patients with atrophic gastritis, who also have the hOGG1 Cys allele, more susceptible to gastric cancer[26]. The concentrations of 8-OHdG, inducible nitric oxide synthase (iNOS), nuclear factor κB, myeloid cell leukemia-1, and inhibitor of apoptosis protein are significantly higher in patients with H pylori infection, and in those with stage 3 and 4 gastric cancer. This points to the pivotal role that oxygen-free-radical-mediated DNA damage caused by H pylori infection plays in the development of gastric carcinoma from chronic gastritis[27]. Single-cell gel electrophoresis is a simple and sensitive method for detecting DNA damage in cells. In this study, we found 41.2% of CagA+ cells formed comet tails. This shows that CagA+ culture broth filtrate has the ability to cause DNA breakage or damage, which may lead to the transformation of gastric epithelial cells.

H pylori-associated inflammation related to DNA damage is indicated by increased levels of oxidative DNA damage, increased occurrence of apoptosis and proliferation, as well as increased expression of iNOS, which seems to provide the mechanistic link between H pylori infection and gastric carcinogenesis[2829]. Upregulation of iNOS expression might contribute to the oxidative DNA damage observed during H pylori infection[30]. Yabuki et al[31] have investigated cell proliferation and DNA damage in ablation samples from 35 cases of gastric carcinoma, and have indicated that cell damage in H pylori-infected human gastric mucosa increases cell proliferation.

It is widely accepted that there is a strong association between Helicobacter pylori (H pylori infection) and gastric cancer, but the exact molecular mechanism of the pathogen in gastric carcinogenesis has not yet been clarified. DNA damage is involved in the carcinogenesis process. Single-cell gel electrophoresis is a simple and sensitive method for detecting DNA damage in cells.

There has been considerable interest in recent years in virulence factors, such as CagA protein, which predispose individuals to develop gastric carcinoma. Understanding DNA damage in gastric epithelial cells will provide us with a new strategy for effective prevention of gastric cancer induced by H pylori infection. It is also helpful to clarify CagA protein carcinogenesis.

This study emphasizes the close relationship between H pylori, especially CagA+ strains, and gastric carcinoma. It provides a new approach to elucidating the mechanism of H pylori gastric carcinogenesis. It also implies that compounds able to repair DNA damage in H pylori-infected cells may be used to create new strategies for the prevention and/or treatment of human gastric malignancy.

This study seems innovative and interesting. Products of DNA damage have been observed in various pathological processes of the digestive tract, including gastric cancer. To the best of our knowledge, there are still many aspects of the mechanism of H pylori infection in gastric carcinogenesis to explore, by studying its effects on DNA damage in gastric epithelial cells in vitro.

The National Natural Science Foundation of China, No. 30271276