Anaplastic carcinomas of the pancreas are rare, representing only 0.5%-7% of all non-endocrine malignances in this organ[12]. The origin of the tumor is considered pancreatic ductal cells because they are accompanied with areas of adenocarcinomas in most cases[2]. However, they also contain mesenchymal components such as spindle-shaped cells and osteoclastoid giant cells, reminiscent of having sarcomatous differentiation. The prognosis of pancreatic anaplastic carcinoma is extremely poor. The combination of immature adenocarcinoma and sarcoma components may portend an adverse clinical course.

A 38-year-old female patient with no previous medical history was introduced to our hospital in October 2000, for further examination of a retroperitoneal cystic tumor that was disclosed incidentally by routine ultrasonography (US) in the first trimester of her first pregnancy. She was completely asymptomatic. Magnetic resonance imaging (MRI) and US showed a large multiloculated cystic tumor with a thick capsule at the tail of the pancreas. It measured 10 cm in diameter and displaced the stomach anteriorly. A probable diagnosis of a mucinous cystic neoplasm was made. We recommended her to receive resection of this potentially malignant tumor soon, but she decided to postpone operation until delivery. She delivered a healthy baby in July 2001. Computed tomography (CT) showed a multiloculated cystic tumor (Figure 1), which seemed similar in size of that at the initial diagnosis. She hesitated to receive surgery and was lost to medical follow-up. 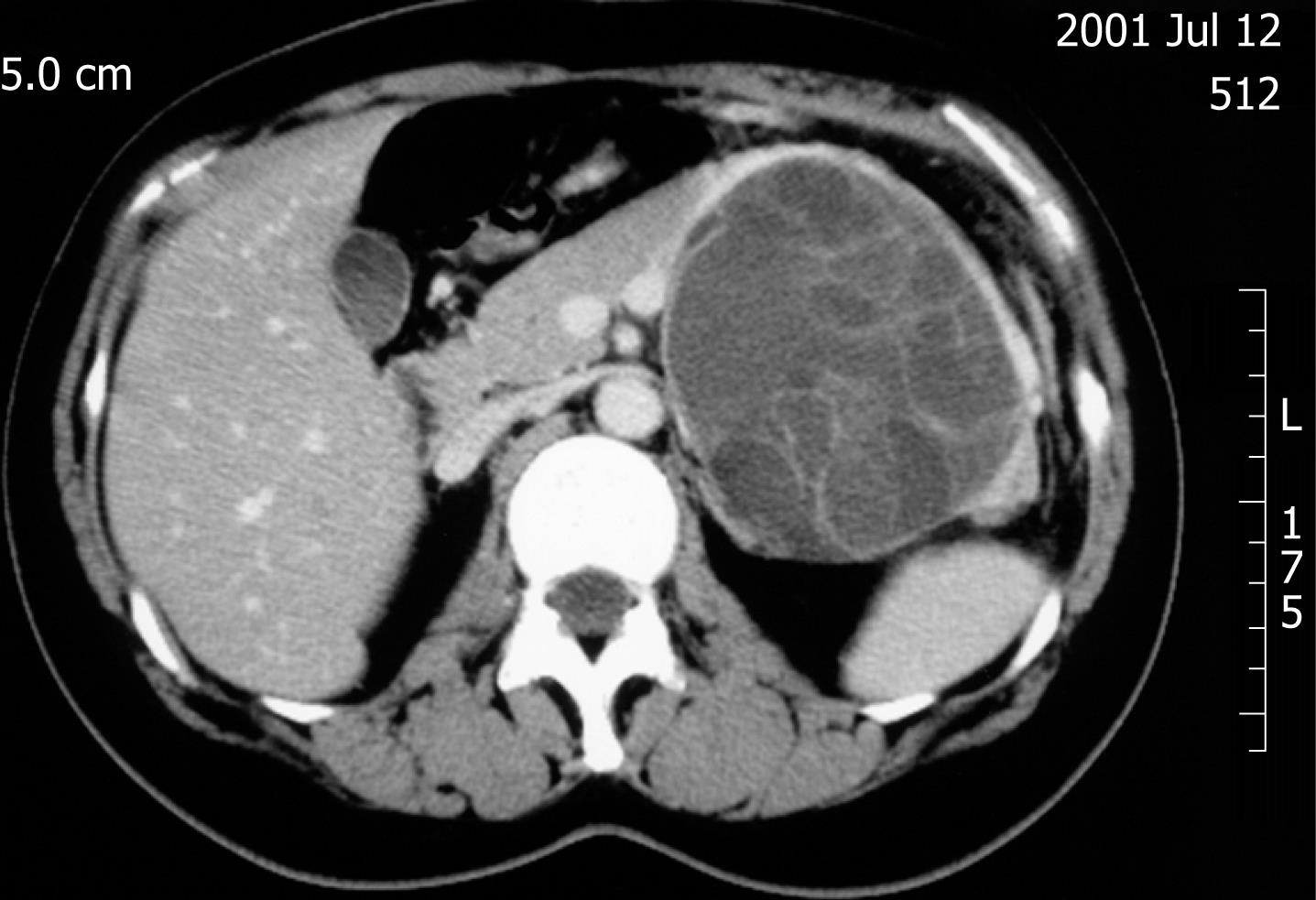 Figure 1 CT after the first delivery showing a 10 cm × 10 cm multi-loculated cystic tumor at the tail of the pancreas.

In September 2002, she presented repetitive vomiting and hematemesis, when she noticed her second pregnancy. In November, She presented hematemesis and tarry stool again. MRI and US showed marked enlargement of the cystic tumor. Because of progressive anemia, she underwent urgent operation in the second trimester. At laparotomy, a dense adhesion between the tumor and posterior wall of the stomach was noted, so that an en-block resection was accomplished by distal pancreatectomy, splenectomy and a partial resection of the stomach. The postoperative course was uneventful and she delivered her second baby in April 2003.

In August 2003, a routine medical checkup by US disclosed a 3 cm tumor near the pancreatic stump. The tumor showed both cystic and solid appearances with capsule enhancement. The second operation was performed under the diagnosis of local recurrence of the mucinous cystic neoplasm. At laparotomy, the tumor was located between the pancreatic stump, posterior wall of the stomach and the left adrenal, which was removed en-block by additional partial pancreatectomy, partial gastrectomy, and left adrenalectomy.

The patient was still alive and well four years after the resection. CT revealed no local and distant tumor recurrences at the latest follow-up.

The tail of the pancreas resected at the first operation contained a multiloculated cystic tumor, measuring 14 cm × 14 cm, filled with about one liter of straw-yellow mucinous fluid. The cyst was uniformly lined with smooth inner surface with a thickened capsule of 5-10 mm width. At the cut surface of the maximal dimension, ten blocks were sampled for microscopic examination. The histological diagnosis was a mucinous cystic neoplasm, borderline type (Figure 2). The tumor had an ovarian-like stroma which was immunohistochemically positive for a progesterone receptor. None of the lymph nodes was involved, nor was the pancreatic cut margin. At the site of perforation to the stomach, no neoplastic change was identified in the gastric wall. 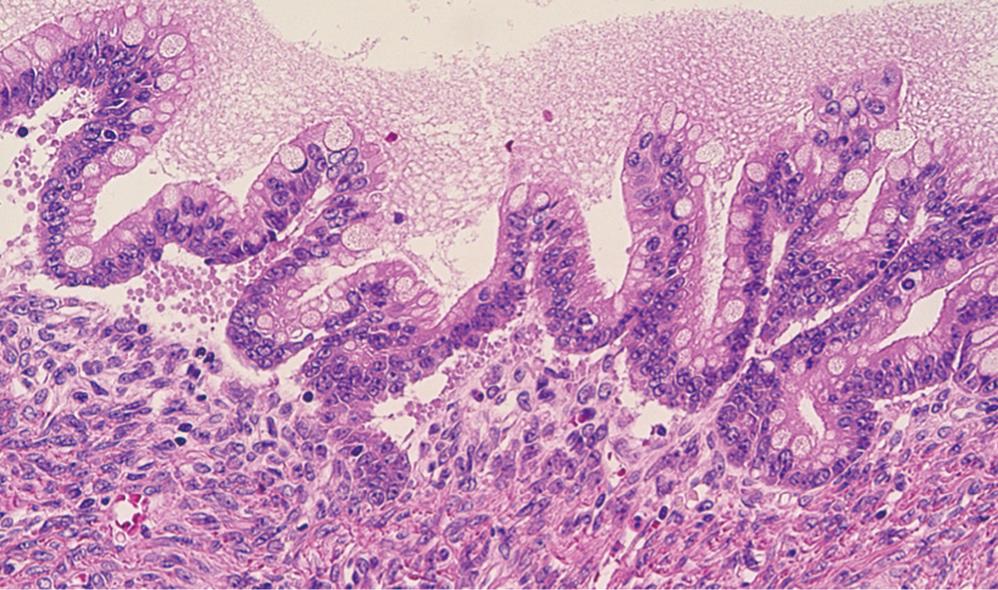 The recurrent tumor was entirely cystic and contained brown, dirty mucus. The tumor was located between the pancreatic stump and posterior wall of the stomach. Macroscopically, it was composed of two different parts. At the pancreatic side, the inner surface was white and smooth, resembling that of the previously resected primary tumor, while at the gastric side, it showed a tan-brown, irregular one. There was no transition area between the two parts (Figure 3). Pathology of the part near the pancreatic stump was a borderline-type mucinous cystic neoplasm. The part at the gastric side, on the other hand, contained an anaplastic carcinoma with osteoclastoid giant cells, atypical spindle-shaped cells and round cells, showing sarcomatous changes (Figure 4). The immunohistochemical the features of anaplastic carcinoma are summarized in Table 1. The recurrent tumor was also positive for progesterone receptor. All components of the anaplastic carcinoma were intensely positive for vimentin. Leukocyte common antigen and CD68 were positive in spindle-shaped cells and giant cells, while cytokeratin was positive in cytoplasm of the obviously epithelial component and focally in some of the spindle-shaped cells. P53 was also positive throughout of anaplastic carcinoma.

Figure 3 Cut surface of the recurrent tumor. A: Location of the cystic tumor between the pancreatic stump (a) and posterior wall of the stomach (b); B: Cut surface of the specimen revealing the tumor composed of two different components.

Anaplastic carcinomas associated with mucinous cystic neoplasms are very uncommon. Only several cases have been reported to date (Table 2)[3–12]. Some underwent resection of the cystic tumor at the onset, while others were treated with cystenterostomy first. Because of co-existent adenocarcinomas in the areas of anaplastic cancer, most of the tumors were thought to be of epithelial origin. However, the pathogenesis of these neoplasms, particularly those with epithelial and mesenchymal components, remains a subject of controversy.

In our case, the entire anaplastic carcinoma was intensely immunohistochemical positive for vimentin, an intermediate fragment associated with mesenchymal cells. Areas of spindle-shaped cells and giant cells were also positive for leukocyte common antigen and CD60. These facts suggest the sarcomatous nature of the anaplastic carcinoma[12]. In addition to the positive vimentin, areas of the carcinoma were positive for cytokeratin. The co-expression of cytokeratin and vimentin in the cells with the same hisotological character seemed unusual, but it was reported that vimentin becomes positive when the tumor cells are in a proliferative state[1314]. Immunohistochemical study alone cannot determine the origin of anaplastic carcinoma in the mucinous cystic neoplasms. Van den Berg et al[11] analyzed genetically three cases of anaplastic carcinoma related to mucinous cystic neoplasms, and disclosed that the sarcomatous and carcinomatous components are different phenotypically but genetically uniclone.

Another interesting feature of this case is that the tumor experienced pregnancy twice. To the best of our knowledge, there are no reports on the relation of the progression of mucinous cystic neoplasm with pregnancy. Ovarian-like stroma exists exclusively in female patients with mucinous cystic neoplasms, which often are immunohistologically positive for progesterone and/or estrogen receptors. In our case, both the primary and recurrent tumors were positive for progesterone receptors. It is unknown whether physiological changes in blood concentration of these hormones promote the progression of the tumor. In our patient, the tumor size was stable during the first pregnancy, but rapidly enlarged in the second trimeseter of the second pregnancy. Increased mucious production might induce the enlargement of the tumor and subsequent rupture.

Our patient was still alive without any sign of recurrence four years after the second operation. However, close monitoring on tumor recurrence should be required because anaplastic carcinoma reportedly has a dismal prognosis.