AIM: To investigate the in vitro effect of entecavir (ETV) on the function of dendritic cells (DCs) derived from chronic hepatitis B (CHB) patients.

METHODS: Mononuclear cells were isolated from peripheral blood of patients with CHB. DCs were incubated with RPMI-1640 medium supplemented with fetal bovine serum, IL-4, granulocyte-macrophage colony-stimulating factor (GM-CSF). DCs were treated with or without ETV on the fourth day. Cell surface molecules, including CD1a, CD80, CD83 and HLA-DR, were assessed by flow cytometry. Concentrations of IL-6 and IL-12 in the supernatant were assayed by enzyme-linked immunosorbent assay (ELISA). The ability of the generated DCs to stimulate lymphocyte proliferation was observed.

CONCLUSION: Entecavir can enhance the biological activity of DCs derived from CHB patients.

Hepatitis B virus (HBV) infection is a global public health problem, and over 400 million people suffer from HBV infection worldwide currently[12]. Chronic HBV infection results from impaired antiviral immune response of the host that cannot produce sufficient competent specific cytotoxic T lymphocytes (CTL) to eliminate the invading virus[34]. However, its mechanism remains unclear. Dysfunction of dendritic cells (DCs) is regarded as one of the factors for chronic hepatitis B (CHB) infection[5]. DCs are crucial antigen-presenting cells responsible for initiating antiviral immune responses[67]. Thus, one of the methods to treat CHB infection is to enhance the antigen presentation function of DCs in CHB patients, yet the precise mechanism needs to be further understood.

Entecavir (ETV), a nucleoside analogue, has been used in the clinical treatment of CHB infection because it can specifically inhibit the hepadnaviral DNA polymerase by competing with the corresponding dNTP for incorporation in ascent DNA and by acting on it as a chain terminator after incorporation[8]. It appears to be transported into the cells via pyrimidine nucleoside transporters and is activated by several sets of cellular enzymes[9]. Recent reports showed that lamivudine, a nucleoside analogue, can up-regulate the expression of major histocompatibility complex (MHC) class II[10]. We hypothesize that ETV up-regulates DC function by increasing MHC and costimulatory molecules to enhance T lymphocyte immune response, thus strengthening the antiviral immune response. Therefore, we isolated DCs from peripheral blood mononuclear cells of CHB patients, pulsated them with designated concentrations of ETV in vitro and observed its effects on DC phenotype and function. The results of this study provide new evidence to support the application of medicine and DC-based immunotherapy for CHB patients.

Twenty-five CHB patients with positivity HBsAg, HBeAg, HBcAb and serum HBV-DNA were enrolled in this study. All of them were negative for HCV and HIV and had no histories of other liver diseases. Ten healthy volunteers from postgraduates of Zhengzhou University were recruited into this study as controls (Table 1).

Peripheral blood was collected from CHB patients and healthy volunteers and heparinized. Peripheral blood mononuclear cells (PBMC) were isolated by centrifuging on a column of Ficoll-Conray in vitro as previously described[11–13]. Briefly, PBMC were suspended in RPMI 1640 medium supplemented 10% fetal bovine serum (FBS) and seeded in 24-well plastic plates for 2 h. The non-adherent cells were gently removed and the adherent cells were cultured in RPMI-1640 medium supplemented with 10% FBS, 10 ng/mL rhGM-CSF, 5 ng/mL rhIL-4 in a humidified atmosphere containing 50 mL/L CO2 at 37°C. On the fifth day DCs from CHB patients were treated with or without ETV (0.05 &mgrg/mL) and designated as ETV treatment group and CHB control group, respectively. DCs from healthy volunteers were designated as healthy control group not treated with ETV. Half of the medium was replaced with a fresh medium every other day. DCs were harvested on the eighth day.

Mononuclear cells were isolated from peripheral blood of healthy subjects. After incubated for 2 h, the non-adherent cells were collected as lymphocytes. Mitomycin C (50 &mgrg/mL) was added to the culture. DCs were harvested from each group after 30 min and then seeded onto 96-well culture plates (1 × 104/well) as stimulator cells together with lymphocytes (1 × 105/well) as responder cells. Triple wells were set for each group. After cultured for 72 h, OD570 was assayed by MTT and stimulator index (SI) was calculated following the formula of SI = OD experiment/(OD responder cells + OD stimulator cells).

Concentrations of IL-12, IL-6 in the supernatant of DCs on the eighth day were detected with ELISA kits according to the manufacturer’s instructions. Triple wells were set for each sample.

Data were analyzed with SPSS10.0 statistical software. The significant difference between groups was determined by one-way ANOVA. P < 0.05 was considered statistically significant.

After cultured for 24 h, swarming of cells was observed under a microscope. Two days later the size of DCs became larger and five days later much ecphyma was found on the surface of DCs, many nebulous substances floating on the culture liquid were demonstrated on the seventh day. However, the ETV-treated group had a distinct modal difference compared with the CHB control group (Figure 1). 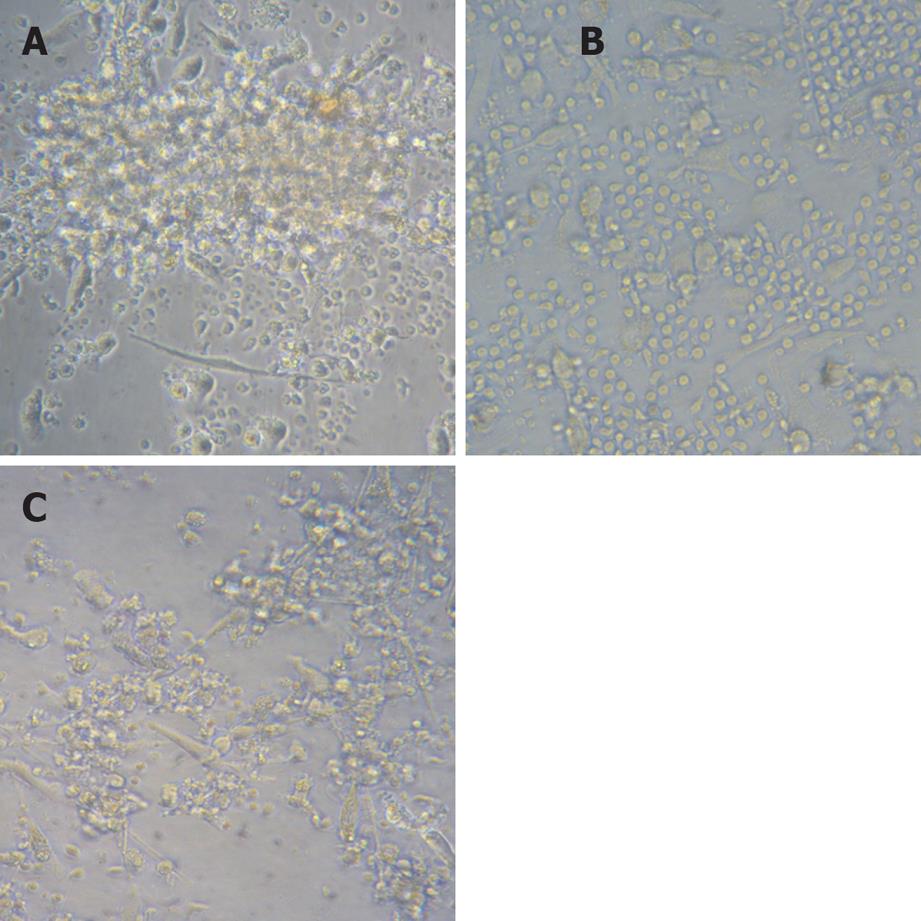 Concentration of IL-12 and IL-6 in supernatant of DCs 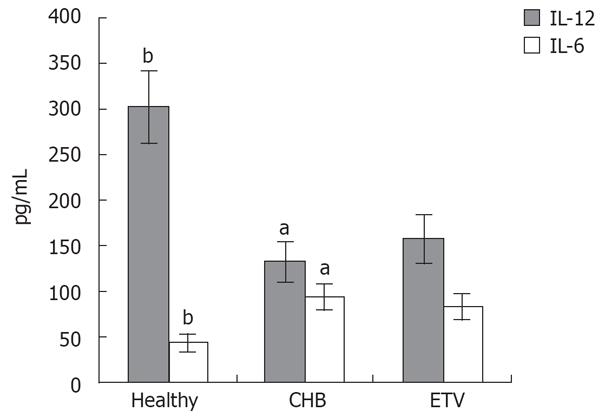 Figure 2 Secretion of IL-12 and IL-6 from different groups of patients (aP < 0. 05 vs ETV; bP < 0.01 vs CHB control).
Priming lymphocytes in vitro pulsated with ETV-treated DCs

Weak and oligospecific antiviral B and T cell responses are responsible for the insufficient control of chronic HBV infection[15]. However, the mechanism underlying this immunological hyporesponsiveness remains unknown[1617]. Immune tolerance may play an important role[1819]. It was reported that the immune system and cytokine play a key role in HBV clearance[11]. Patients infected with HBV start up a series of non-specific immunology responses including activation of natural killer cells and interferon. However, the complete clearance of HBV must rely on the activation of HBV-specific T lymphocytes[20]. If HBV cannot be completely eliminated, the number of HBV-antigen specific CD8+ T lymphocytes would decrease, resulting in immune tolerance to the invading virus and CHB[21].

DCs are antigen-presenting cells that link innate immunity with adaptive immunity and are essentially involved both in the initiation of primary immune responses and in the establishment of peripheral tolerance[22]. The mechanism of CHB is related to the impairment of immune capacity resulting from functional deficiency of DCs in quality and quantity[23]. HBV might cause phenotypic and functional alterations by directly affecting the DC precursors in blood or bone marrow[14]. So one of the important pathways is to selectively modify DCs and activate HBV specific immune response during CHB treatment[24]. Beckebaum et al[10] argued that lamivudine can increase the expression of HLA-DR on DCs while processing HBV. Based on this fact, we cultured DCs for four days and pulsated them in vitro with entecavir, a new nucleoside analogue, at certain concentrations, and then observed the effect of ETV on DC phenotype and function.

The key mechanism underlying DC-mediated T cell stimulation after antigen uptake and process by APC includes engagement of the antigen-specific T cell receptor by peptide-loaded MHC molecules, interaction of costimulatory molecules with their receptors on T cells and secretion of cytokines[25]. CD1a is a specific marker of human DCs, CD83 is the mature sign of human DC, and HLA-DR, one of the MHC II molecules, mostly takes part in the antigen presentation, while CD80, one of the co-stimulating molecules, promotes T cell activation by combining with the correspondent T cell receptor[2627]. A significantly reduced expression of CD1a, CD80, CD83 and HLA-DR on DCs from CHB patients was detected in the present study. Flow cytometry showed that the expression of cellular surface markers such as CD1a, CD80, CD83 and HLA-DR on DCs increased more significantly in the ETV treatment group than in the CHB control group. The enhanced stimulatory capacity of ETV-treated DCs in MLR indicates that other mechanisms may be involved in the activation and proliferation of T cells apart from the mechanism underlying the traditional double-signs.

DCs dictate Th0 cells to differentiate towards Th1 and Th2 cells accompanying secretion of IL-6, IL-12 and IFN-γ[28]. IL-12 secreted by mature DCs drives Th0 cells to develop into Th1 cells, promotes secretion of IL-2, IFN-γ and participates in the cellular immune response. IL-6 secreted by immature DCs is related to Th2 cell development, restrains the cellular immune response and induces immune tolerance[29]. Since IL-12 plays a critical role in the Th1 cell differentiation, decreased IL-12 levels in CHB patients can be the factor that directly attributes to the weak T-cell stimulatory capacity of DCs from CHB patients in MLR[30]. During our experiments, secretion of IL-12 increased more significantly in the ETV treatment group than in the CHB control group. The level of IL-6 was lower in the ETV treatment group than in the control group. Thus, we may conclude that DCs pulsed by ETV at designated concentrations can promote Th1 cell proliferation and enhance cellular immune response.

In conclusion, ETV could increase the expression of CD1a, CD80, CD83 and HLA-DR and the secretion of IL-12, reduce the secretion of L-6 and enhance the proliferation of T cells in the present study, indicating that ETV can change the biological activities of DCs derived from CHB patients, which can be utilized as a DC-based immunotherapy for CHB infection. Finally, our data, similar to those of previous reports[31], have a limitation in interpretation for immune pathology of chronic hepatitis B virus infection since the in vitro generated DCs can be found at different developing stages with variable functional aspects, although this study model has been employed in similar studies[31].

Hepatitis B virus (HBV) infection is a global public health problem. Immune response of the host plays an important role in the pathogenesis of chronic HBV infection.

One of the important factors responsive for the immune tolerance in chronic hepatitis B (CHB) is the impaired function of dendritic cells (DCs) which cannot efficiently present HBV antigens to the host immune system.

DC-based therapeutic vaccine has recently been considered a potential approach to the treatment of CHB. Entecavir, a nucleoside analogue, specifically inhibits the hepadnaviral DNA polymerase and up-regulates the host immune system.

Results of the present study support the application of entecavir and DC-based immunotherapy for CHB.

This is a good paper, describing that entecavir combined with DCs may be an effective therapeutic approach to eradication of chronic HBV infection.