Various complications have been related to laparoscopic cholecystectomy but most occur shortly after the procedure. In this report, we present a case with very late complications in which an abscess developed within the gallbladder fossa 6 years after laparoscopic cholecystectomy. The abscess resolved after treatment with CT-guided extrahepatic aspiration. However, 4 years later, an endoscopic retrograde cholangiopancreatography (ERCP) performed for choledocholithiasis demonstrated a “gallbladder” which communicated with the common bile duct via a patent cystic duct. This unique case indicates that a cystic duct stump may communicate with the gallbladder fossa many years following cholecystectomy.

Laparoscopic cholecystectomy has been widely accepted as a preferred option for the management of patients with cholelithiasis. Complications such as biliary injuries[1,2] intestinal ischemia[3] and biliary-colonic fistula[4] have been reported, but most occur shortly after surgery. In this report, we present a case with very late complications in which an abscess developed within the gallbladder fossa

6 years after laparoscopic cholecystectomy. Four years later, despite the clinical certainty that it had been removed 10 years previously, a “gallbladder” communicating with the common bile duct via a cystic duct was demonstrated by endoscopic retrograde cholangiopancreatography (ERCP).

A 73-year-old male presented with complaints of right upper quadrant discomfort, fatty food intolerance and bloating. He eventually underwent an elective laparoscopic cholecystectomy in early October 1996. A J-P drainage tube was placed during the operation. The drainage was initially dark bloody, then became bilious, but gradually became clear over the next several days. The patient was discharged home after 1 wk. A follow-up abdominal CT scan was performed in May 1997, six months after the procedure. There were no fluid collections in the gallbladder fossa or peritoneal cavity.

The patient did well until early October 2002, six years after cholecystectomy, when he presented with complaints of fever, chills and mild pain in the right upper quadrant. Sonographic examination of the abdomen showed a normal sized liver with non-dilated intrahepatic ducts and common bile duct. Of note, a gall bladder-like structure was seen in the gallbladder fossa. An abdominal CT confirmed the presence of a 4 cm encapsulated fluid collection in the gallbladder fossa (Figure 1). A subsequent HIDA scan showed prompt excretion of the radiotracer into the small bowel with no evidence of biliary leak. A CT-guided transhepatic intra-abdominal aspiration was then performed (Figure 2). Turbid-appearing fluid was readily aspirated from the extrahepatic fluid collection. Gram stain of the aspirated fluids showed the presence of many white blood cells. Cultures were positive for moderate Enterobacter SP in the aspirates. The persistent low-grade fever subsided shortly after the CT-guided aspiration, and the patient was discharged home with no abdominal complaints. In August 2004 (22 mo after aspiration), an abdominal CT scan was repeated and no gallbladder fossa fluid collection was observed. 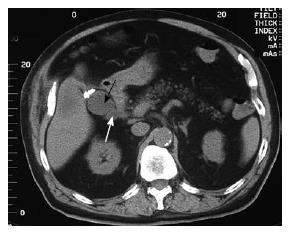 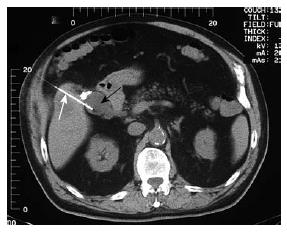 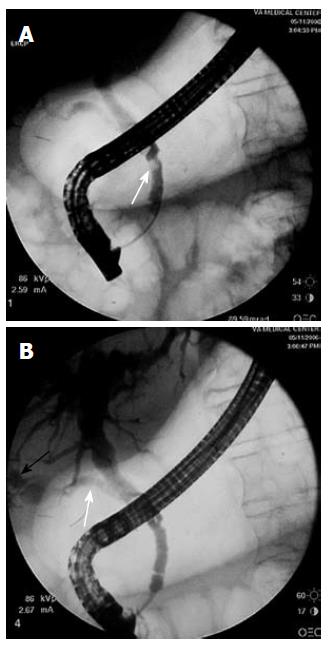 In the present case, the fluid collection inside the gallbladder fossa observed 6 years after the procedure proved to be an abscess on the basis of the turbid, non-bilious, culture positive fluid retrieved during CT-guided aspiration. The abscess resolved after percutaneous transhepatic aspiration and antibiotic treatment. The most recent finding in this patient, a gallbladder-like structure inside the gallbladder fossa that directly communicated with the common bile duct, is likely related in some manner to this prior abscess. One possibility is that the previously documented abscess may have resolved by fistualizing into the cystic duct. Alternatively, increased pressure within the cystic duct as a result of biliary obstruction from choledocholithiasis may have caused rupture of the stump and its subsequent breakthrough into a residual cavity in the gallbladder fossa.

By whatever mechanism, this case demonstrates that, post-cholecystectomy, a cystic duct stump may potentially communicate with extrabiliary structures in and around the gallbladder fossa. In this respect, we believe that this is the first reported case in which a cystic structure resembling a radiologically typical “gallbladder” was seen on ERCP many years after this organ was surgical removed.