AIM: To investigate the safety of β-L-D4A on DNA polymerase α.

CONCLUSION: β-L-D4A is a more safe nucleoside for hepatitis B virus (HBV) infection with a lower host toxicity.

Infection with hepatitis B virus (HBV) is a global medical problem[1]. With the support of National Natural Science Foundation of China[2], we have found a novel nucleoside analog (β-L-D4A), a potent and selective inhibitor of HBV replication, which is stronger than lamivudine (3TC)[3,4]. Because the nucleoside and nucleoside analog could serve as substrates for normal DNA polymerases, resulting in inhibition of cellular DNA synthesis, we decided to study the side effect of β-L-D4A on DNA polymerases[5].

It has been found that many kinds of DNA polymerase have a crucial role in DNA replication, among which, the high molecular weight class of eukaryotic DNA polymerase α (EC2.7.7.7), first identified in calf thymus extract and found to be ubiquitous among eukaryotes, constitutes the predominant polymerase species in actively dividing cells[6,7]. So ion exchange chromatography was used to separate DNA polymerase α from crude extract of human Hela cells, which could be used as a substrate to evaluate the safety of nucleoside-β-L-D4A.

β-L-D4 triphosphate was chemically synthesized in our institute with the help of Pharmaceutic College of Wuhan University and identified by infrared mass spectra, nuclear-magnetic resonance. 3TC 5' triphosphate was provided by Professor Cheng YC (School of Medicine, Yale University, New Haven, CT). Hela S3 cells were purchased from Institute of Immunity, Tongji Medical College, DE52 and P11 cellulose resin were from Whatman while HTP was from Bio-Rad. DNA-cellulose and activator calf thymus DNA were obtained from SIGMA. α-32P-dTTP was from Amersham. All other tissue culture reagents were from Gibco.

All operations were performed at 0°C-4°C. Unless otherwise noted, all buffers contained 1 mmol/L β-mercaptoethanol and 1 mmol/L EDTA.

Fraction c was diluted to a final concentration of 0.1 mol/L KPO4 at 1:1 with 1 mmol/L β-mercaptoethanol, 1 mmol/L EDTA and loaded onto a DEAE-cellulose column (5 cm × 20 cm ) equilibrated with the same buffer. The column was washed with 3 volumes of equilibration buffer, and the adsorbed activity was then eluted in a single step with 0.2 mol/L KPO4 (pH8.2). All the active fractions from the step were pooled (d).

Fraction d was diluted to a final concentration of 0.1 mol/L KPO4 with 1 mmol/L β-mercaptoethanol, 1 mmol/L EDTA and loaded onto a second DEAE-cellulose column (2.5 cm × 25 cm ). The column was washed with 3 volumes of equilibration buffer and then developed with a 5-6 column volume gradient from 0.1 mol/L to 0.2 mol/L KPO4 (pH8.2).

Bradford method was used to measure the protein concentration, which was operated by directions of the reagent box.

SDS-PAGE was performed to detect the purity of DNA polymerase α.

Western blot was performed to confirm the protein bands.

Detailed kinetic parameters were determined using DNA polymerase α which was prepared, pooled and stored at -80°C until use in experiments. Potential inhibitors at various concentrations were added to 5 μL reaction mixture. Control samples (without inhibitor) included 5 μL solution in PBS, but no inhibitors. DNA polymerase α activity was measured.

To find the inhibition type, α-32P-dTTP(100 cpm/pmol) was performed at the concentration of 1, 3, 5, 7, 10 μmol/L while inhibitors were added at the concentration of 10 μmol/L of each compound. DNA polymerase α was determined. The data were analyzed with GraphPad Prism 4 Demo, which could finish Line weaver-Burk Plot and L-B linear secondary regression with the enzyme kinetics template.

To determine the concentration required to inhibit DNA polymerase α activity by IC50, initial experiments were designed with the gradient (1 μmol/L-400 μmol/L) of each compound. The concentration of α-32P-dTTP (100 cpm/pmol) was 3 μmol/L. All experiments were performed twice. Inhibition rate = (1 - count of drug class/blank control) × 100%. Half logarithm plot was used to process the data. DNA polymerase α activity in the control sample was set at 100%.

To find the inhibition constant (Ki), each compound was studied at five different inhibitor concentrations (10, 40, 100, 160, 200 μmol/L), and at various substrate concentrations (2, 5 μmol/L) in duplicate. Dixon plot was used to deal with the data.

The first DE52 chromatography was to remove nucleic acid. The curve of A280 showed a broad peak including 74 tubes from the 16th tube (0.115 mol/L) to the 90th tube (0.185 mol/L) in the second DE52 chromatography (Figure 1A). The protein in 74 tubes was collected and the ingredient was confirmed by assay of DNA polymerase α activity. The total protein was 0.36 mg measured by Bradford method.

Protein determined by A280 was eluted sharply as a major peak at 0.165 mol/L, with a minor trailing shoulder occasionally present at 0.21 mol/L (Figure 1B). Fractions from 0.15 mol/L to 0.18 mol/L KPO4 were pooled because the minor peak was not the protein as expected. The total protein was 0.039 mg.

Fractions from the 37th to the 64th tube were collected because a single sharp peak appeared at 0.085 mol/L KPO4 (Figure 1C). The characterization was certified by its activity and the protein was 0.008 mg.

Analysis of protein and activity

When the specific activity became higher, the total protein, total activity and yield became lower in each stage, illustrating that DNA polymerase α was purified step by step while the other components were removed (Table 1).

SDS-PAGE showed that the purification of protein was effective because the bands decreased with the step of purification and finally there was only one band (Figure 2). Western blot revealed that the band was DNA polymerase α (Figure 3). 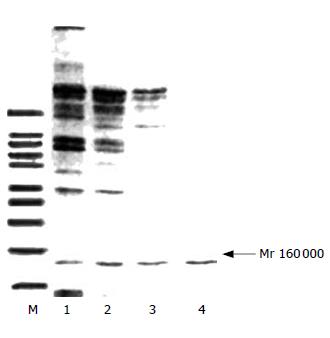 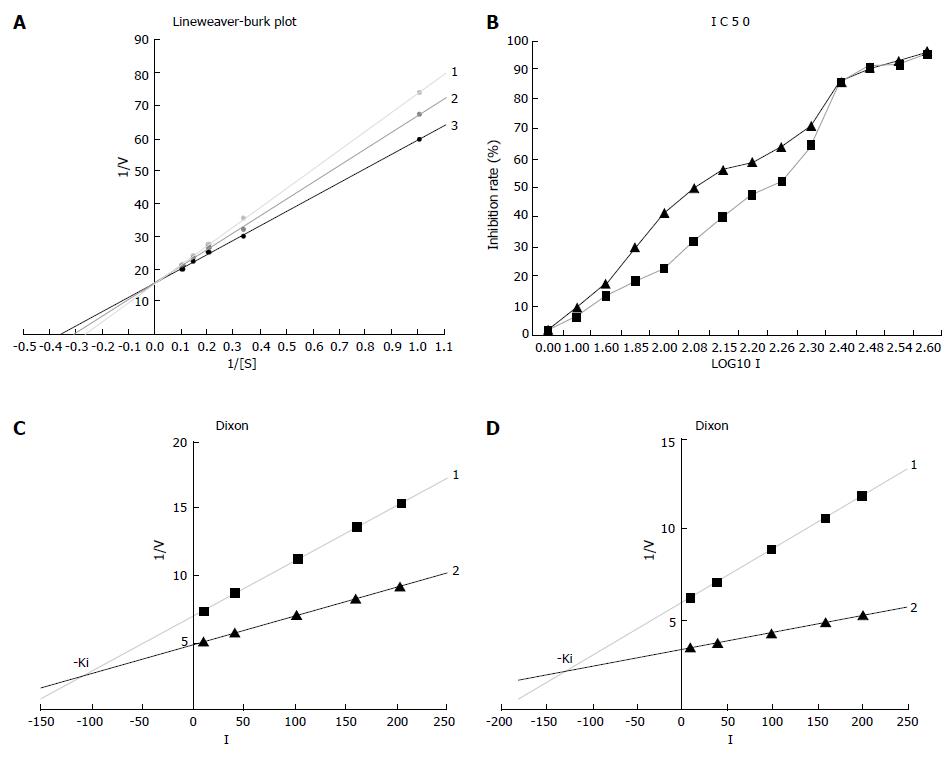 HBV infection, associated with the risk of developing liver cirrhosis and hepatocellular carcinoma, is a worldwide public health problem. Two billion people worldwide show evidence of having been infected with HBV, and more than 350 million of them are chronically infected. Persons with chronic hepatitis B are at a high risk of developing hepatic cirrhosis and primary hepatocellular carcinoma, leading to 500 000 to 1.2 million deaths annually worldwide. Antiviral chemotherapy remains the only choice of treatment for controlling HBV infection in these individuals, for whom available HBV vaccines provide no benefit. At present, approved therapeutics for chronic HBV infection are α-interferon or nucleoside and nucleoside analogs[8]. Drawbacks of treatment with α interferon include a low sustained response rate, undesirable side effects, the need for parenteral administration, and high cost[9,10]. Treatment with nucleosides such as 3TC is less costly and more convenient[11,12]. The fundamental concern is that while initial treatment of patients with 3TC results in a rapid decrease in HBV DNA blood levels, its efficacy is severely compromised in most patients by the development of antiviral resistance after prolonged therapy[13,14]. Although the use of nucleoside and nucleoside analogs as anti-hepadnaviral agents is similarly disappointing, prospects for their future use are bright, as several of recently developed analogs have been found to be potent and can be used as selective inhibitors of HBV replication. In our previous work, the novel nucleoside (β-L-D4A) was synthesized and its inhibitiory actions against HBV were studied and found to be much better than 3TC[15,16]. The inhibition of HBV replication by nucleoside analogs results from the recognition of nucleoside analog triphosphates (TPs) by the RNA-dependent DNA polymerase of HBV (HBV Pol). The triphosphate derivatives could serve as substrates for human DNA polymerases, inhibiting cellular DNA synthesis. For the systemic evaluation of the safety of the new drug, kinetic analysis of DNA polymerases must be performed.

In the present study, DNA polymerase α was purified step by step because the total protein and activity decreased while the specific activity raised and the number of protein bands was cut down till only one band was left in SDS-PAGE (Mr 160 000). Western blot and the specific activity (31 000 units/mg) confirmed that the scheme was effective. The enzyme obtained lays a foundation for the next research.

Nucleoside analogs are chemically synthesized drugs that are able to mimic natural nucleosides[20,21]. They exert their antiviral effect, after anabolism to the triphosphate form, by acting as alternate substrates for the virally encoded reverse transcriptase[22,23]. Incorporation of the nucleoside analog monophosphate into the viral DNA, results in premature termination of viral DNA synthesis. Nucleoside analogs competitively inhibit DNA-dependent reverse transcriptase activity of the viral polymerase[24,25]. As DNA polymerase α has the similar substrate and mechanism to HBV viral polymerase, the drugs could serve as substrates for human DNA polymerase α, inhibiting cellular DNA synthesis[26,27]. Because DNA polymerase α exhibits neither exonuclease nor endonuclease activity, mistake cannot be repaired[28,29]. To determine the safety of nucleosides on cells in the present study, DNA polymerase α was purified and kinetic analysis was performed under the identical conditions of ionic strength, pH, divalent metal ion concentration, and DNA substrate.

The Km increased and Wmax unchanged (Figure 4A), confirming that both of β-L-D4A and 3TC are the competitive inhibitors of DNA polymerase α. In our study, the drugs inhibited DNA polymerase α activity by acting as competitive alternate substrates. 3TC was more effective than β-L-D4A as inhibitors of DNA polymerase α because IC50 of β-L-D4A was 1.5 fold more potent than 3TC and the Ki of 3TC was 105 μmol/L, much lower than β-L-D4A (126 μmol/L), demonstrating that β-L-D4A is significantly more safe than 3TC.

In conclusion, β-L-D4A is a safe drug for HBV infection because it is endowed with lower host toxicity in comparison to 3TC. Furthermore, combined therapy of β-L-D4A and lamivudine for HBV infection can be explored.

Since hepatitis B virus (HBV) replication involves a virally encoded reverse transcriptase (RT), a number of L-configuration nucleoside analogs with an inhibitory effect on RT have emerged as potent antiviral agents against HBV infection. However, most anti-HBV nucleoside analogs tested to date have only transient and limited effects on a small number of HBV-infected individuals with moderate to severe side effects. In light of the fact, development of novel antiviral agents is an extremely important undertaking.

In recent years, a considerable interest has been focused on the use of 2', 3'-dideoxynucleosides (DDNs) in the treatment of chronic HBV infection. β-L-D4A, a novel L-nucleoside, can effectively block the production of HBV in 2.2.15 cells in vitro, but no information is available on the safety evaluation of this new compound.

In this research, kinetic analysis of DNA polymerase α cytotoxicity, was investigated to evaluate the safety of this new compound.

β-L-D4A is a safe drug for HBV infection because it is endowed with a low host toxicity.

This is an interesting paper describing the effect of β-L-D4A (a novel nucleoside analog) on DNA polymerase α. The authors separated DNA polymerase α from crude extract of human Hela cells and studied its enzyme kinetics, showing that the enzyme is less inhibited than lamivudine, thus β-L-D4A may be an effective nucleoside for HBV infection with a lower host toxicity.