We first report a rare case of metastasis from gastric hepatoid adenocarcinoma (HAC) to cerebral parenchyma, in a 50-year-old Chinese patient. He complained of a one-month history of a paroxysm of headache in the left temple and pars parietalis accompanied with binocular caligation caligo, insensible feeling of limbs and transient anepia. Magnetic resonance (MR) imaging revealed a spherical occupying lesion in the left posterior-temple lobe which was clinically diagnosed as a metastatic tumor. Three years ago, the patient accepted total gastrectomy as he was pathologically diagnosed at gastroscopy having an adenocarcinoma. Eight months after gastrectomy, the occupying lesion in liver was detected by ultrasound and CT, and he accepted transcatheter arterial embolization. Before operation of the brain metastasis, no obvious abnormality was found in liver by ultrasound. Histopathological characteristics of the brain tumor were identical to those of stomach tumor. The growth pattern of both tumors showed solid cell nests. The tumor cells were polygonal, and had abundant eosinophilic cytoplasm and round nuclei with obvious nucleoli. Sinusoid-like blood spaces were located between nodular tumor cells. Immunohistochemistry-stained tumor cells were positive for AFP and negative for Hep-Par-1. According to these histopathological findings, both tumors were diagnosed as HAC and metastatic HAC. The patient remained alive 16 mo after tumorectomy of the cerebral metastasis. The differential diagnosis of brain metastasis from metastatic tumors should use a panel of antibodies to avoid confusing with the brain metastasis of hepatocellular carcinoma (HCC). This paper describes this rare case of metastasis from gastric hepatoid adenocarcinoma to cerebral parenchyma, and provides a review of the literature concerning its histopathological and immunohistochemical characteristics.

A 50-year-old patient was admitted to our hospital with complaint of a one-month history of a paroxysm of headache in the left temple and pars parietalis accompanied with binocular caligation caligo, insensible feeling of limbs and transient anepia. The patient had no history of nausea and vomiting, spasm, palsy, aconuresis and copracrasia. Physical examination revealed decreased visual acuity and papilledema.

Magnetic resonance (MR) imaging revealed a spherical occupying lesion of about 6.0 cm × 4.8 cm × 4.0 cm in the left posterior-temple lobe with a high intensity on T2-weighted images and irregular contrast enhancement with a clearly boundary and uneven signal after administration of gadolinium-diethylene triamino pentaacetic acid (Gd-DTPA). The lesion displayed an occupying effect, an out-inferior border close to the left transverse sinus, a perilesional irregular edema zone, compressed and deformed left posterior ventricle, and median line turned to dextroposition (Figure 1). The lesion was clinically diagnosed as a metastatic tumor. 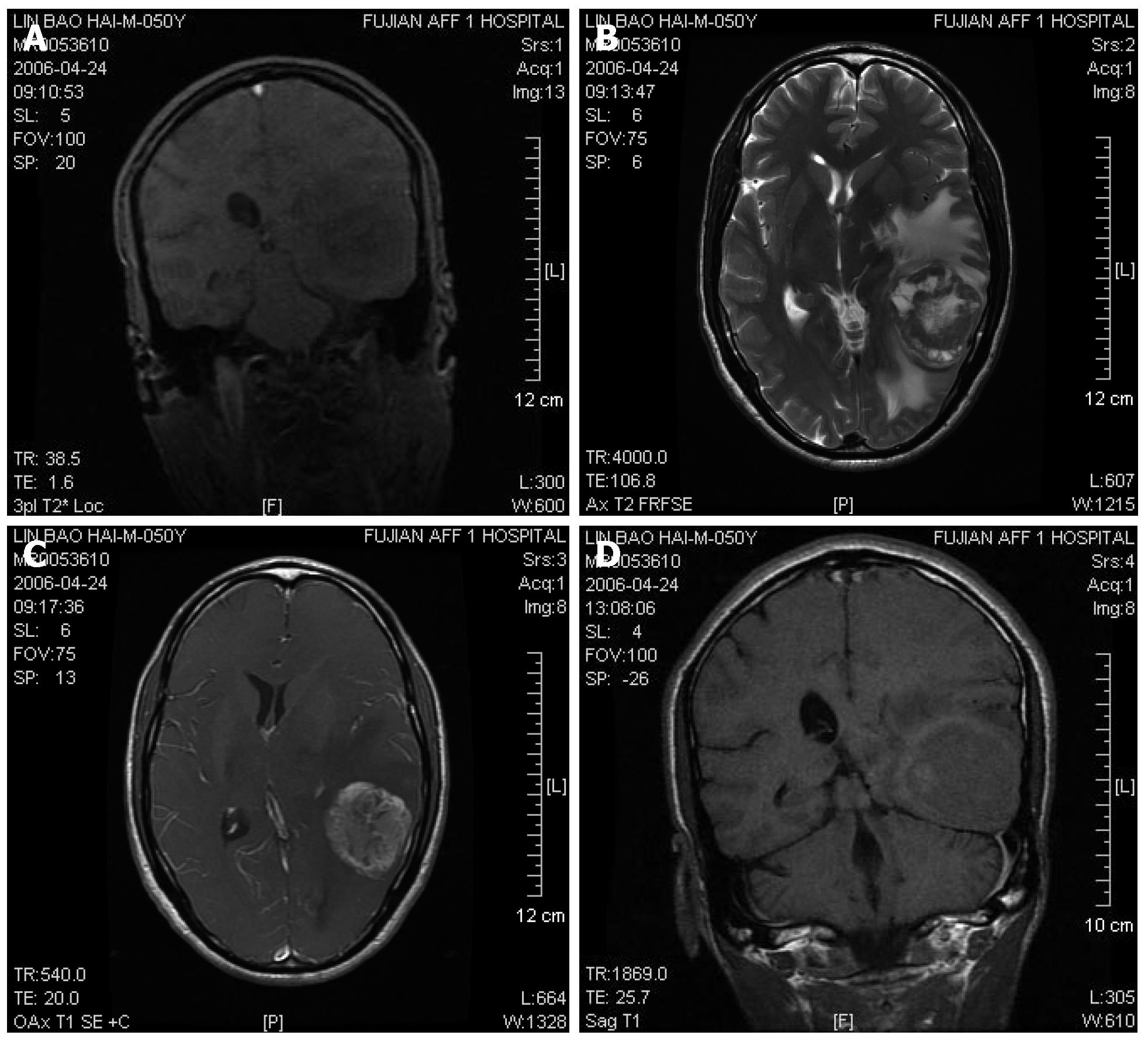 On the 7th d after admission, the patient underwent tumorectomy. A tumor was found in subcortex of the left temporal lobe of about 0.3 cm and resected. A sample of about 4.0 cm × 5.0 cm × 5.0 cm was taken for pathological examination.

Pathological analysis of the tumor sample revealed the growth pattern of solid cell nests. The polygonal tumor cells had abundant eosinophilic cytoplasm and round nuclei with obvious nucleoli. A pseudoglandular configuration containing proteic fluid was found in some parts of the tumor. Sinusoid-like blood spaces were located between nodular tumor cells (Figure 2). Metastasis of hepatocellular carcinoma was suspected. 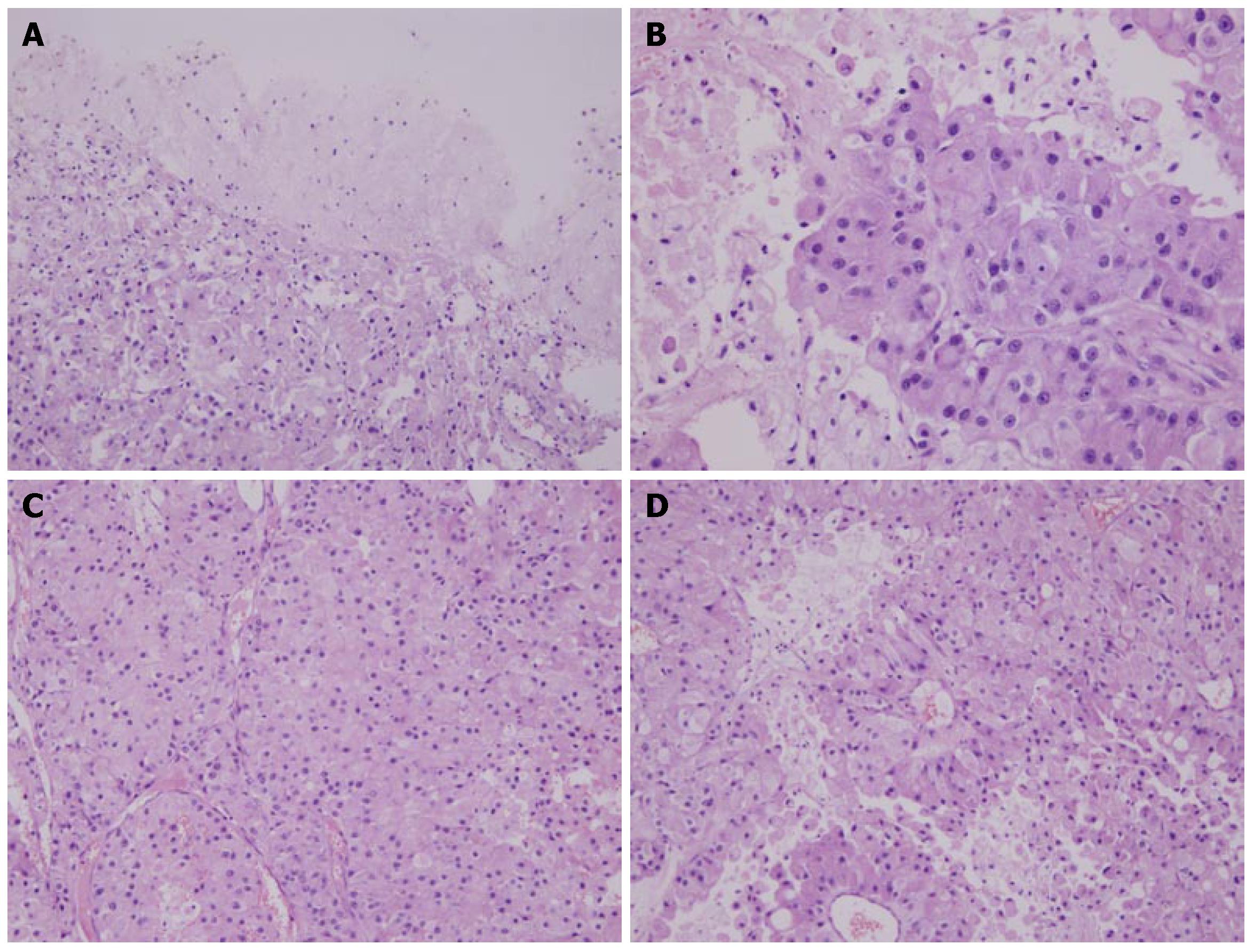 Immunohistochemistry-stained hepatoid cells were positive for alpha-fetoprotein (AFP) and negative for Hep-Par-1 (Table 1, Figure 3), which did not match the immunohistochemical features of hepatocellular carcinoma metastasis. 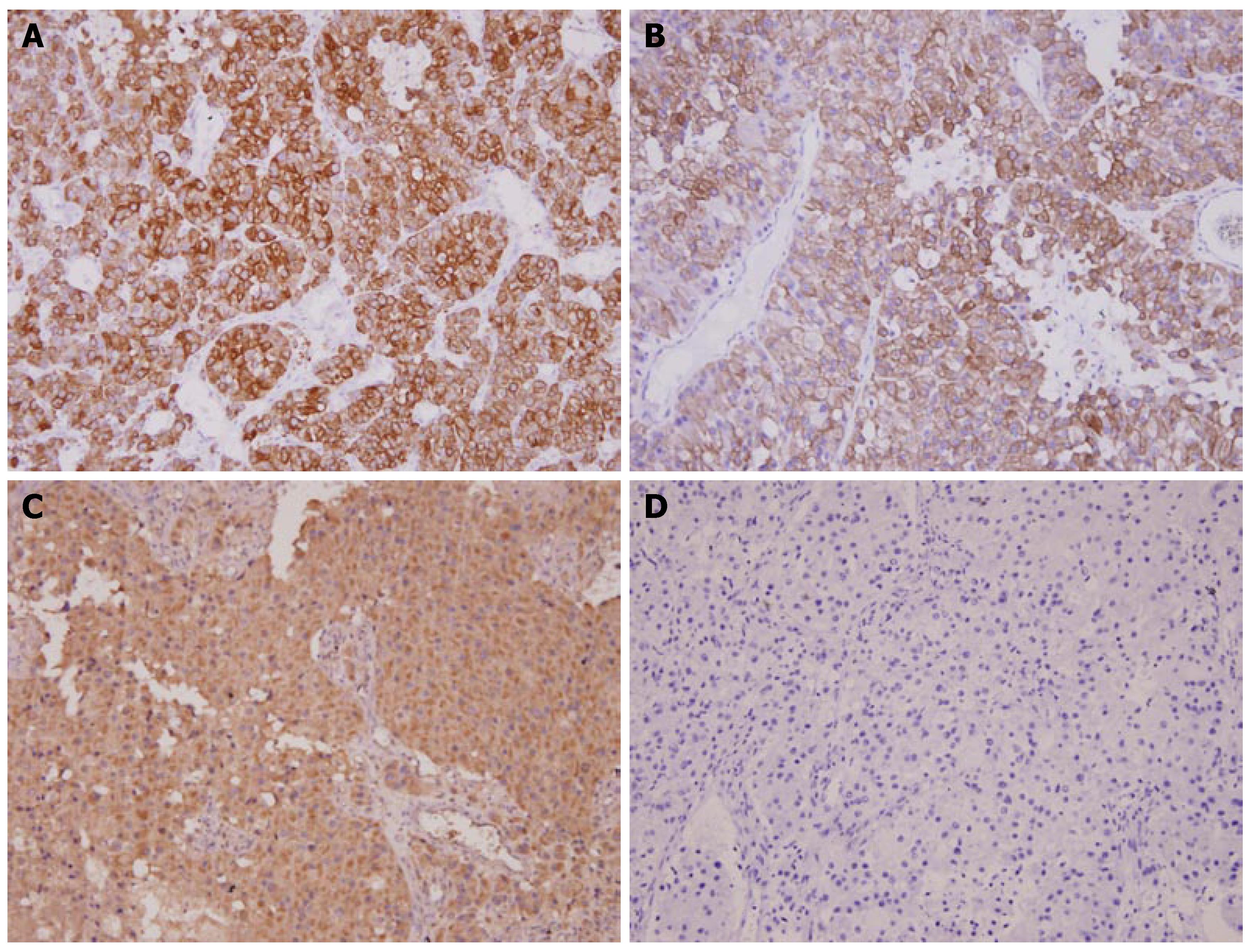 Three years ago the patient was admitted to hospital due to recurrent pain in the epigastrium and accepted total gastrectomy because he was diagnosed having adenocarcinoma in cardia and corpora of the stomach with lymph node metastasis (Figure 4). No abnormal acoustic image in liver, pancreas, spleen and other organs was found on ultrasonograph. After surgery the patient received 6 mo of chemotherapy [calcium folinate (CF), 5-fluorouracil (5-FU) and cis-diamminedichloroplatinum (DDDP)]. The histopathological characteristics of brain tumor were identical to those of the sample sections. Immunohistochemistry-stained specimen of gastric carcinoma was positive for AFP and negative for Hep-Par-1 (Figure 5). Eight months after gastrectomy, an occupying lesion was detected in liver by ultrasound. CT scan also revealed a nodular or lump-like, high-density contrast mass in liver lobes during arterial phase, but the size of liver did not change, liver boundary was smooth and hepatic lobes were normal. The density of a larger mass of about 6.7 cm × 5.5 cm was uneven and the interior density was low at portal venous phase. The architecture of porta hepatis was clear (Figure 6). The diagnosis was liver metastasis from gastric carcinoma. Transcatheter arterial embolization for hepatic metastatic tumors with CF, 5-FU and DDDP was performed. The liver was rechecked by ultrasound every 6 mo after embolization. Before operation of the brain metastasis, ultrasound displayed no obvious abnormalities in liver and kidney and color Doppler flow imaging revealed no obvious bloodstream signals (Figure 7). Based on the results of histopathology and immunohistochemistry, the lesions were finally diagnosed as hepatoid adenocarcinoma (HAC) of cardia and corpora of the stomach and metastatic hepatoid adenocarcinoma in the left posterior temple lobe, respectively. The patient was alive in the 16-mo follow-up period after operation of brain tumor. 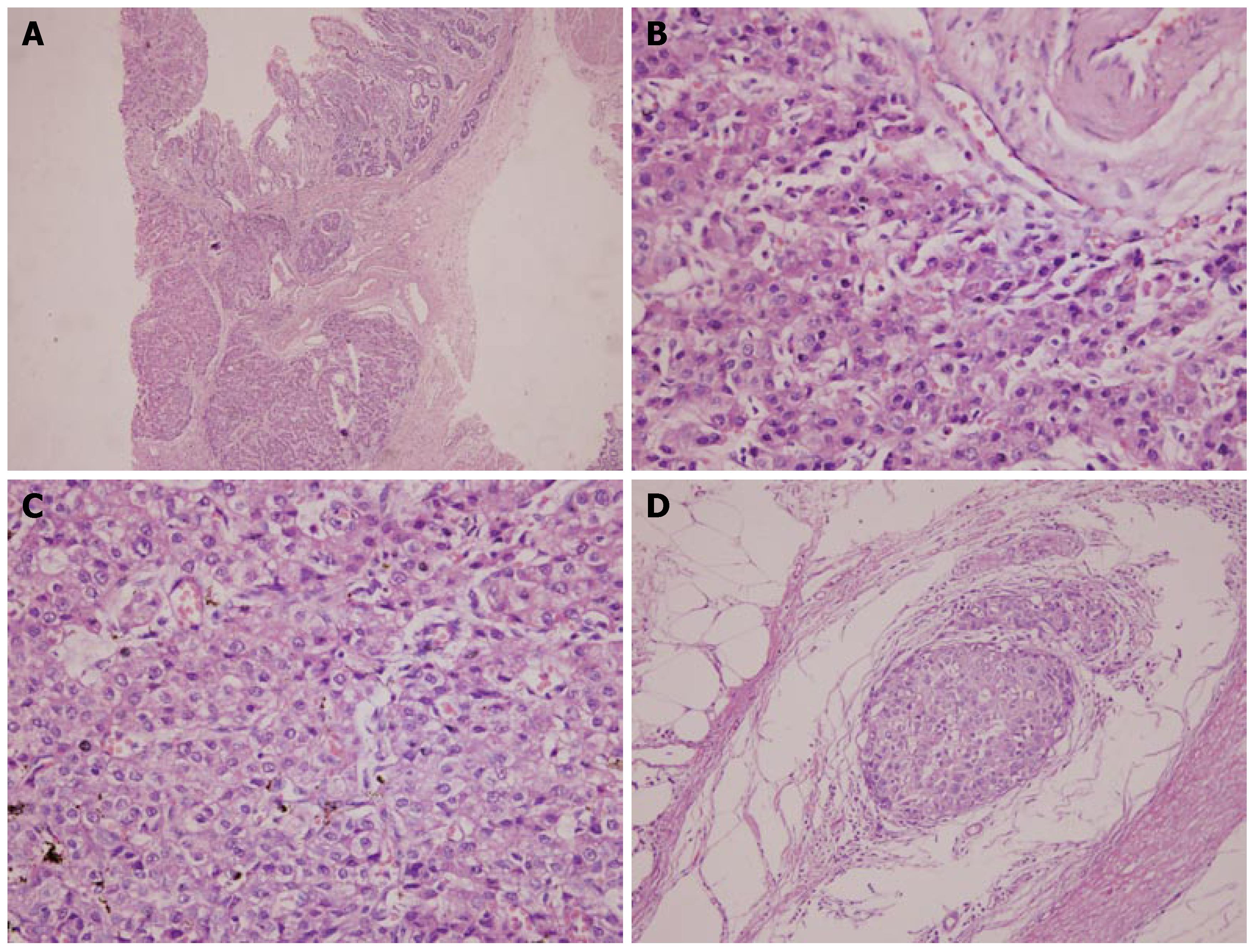 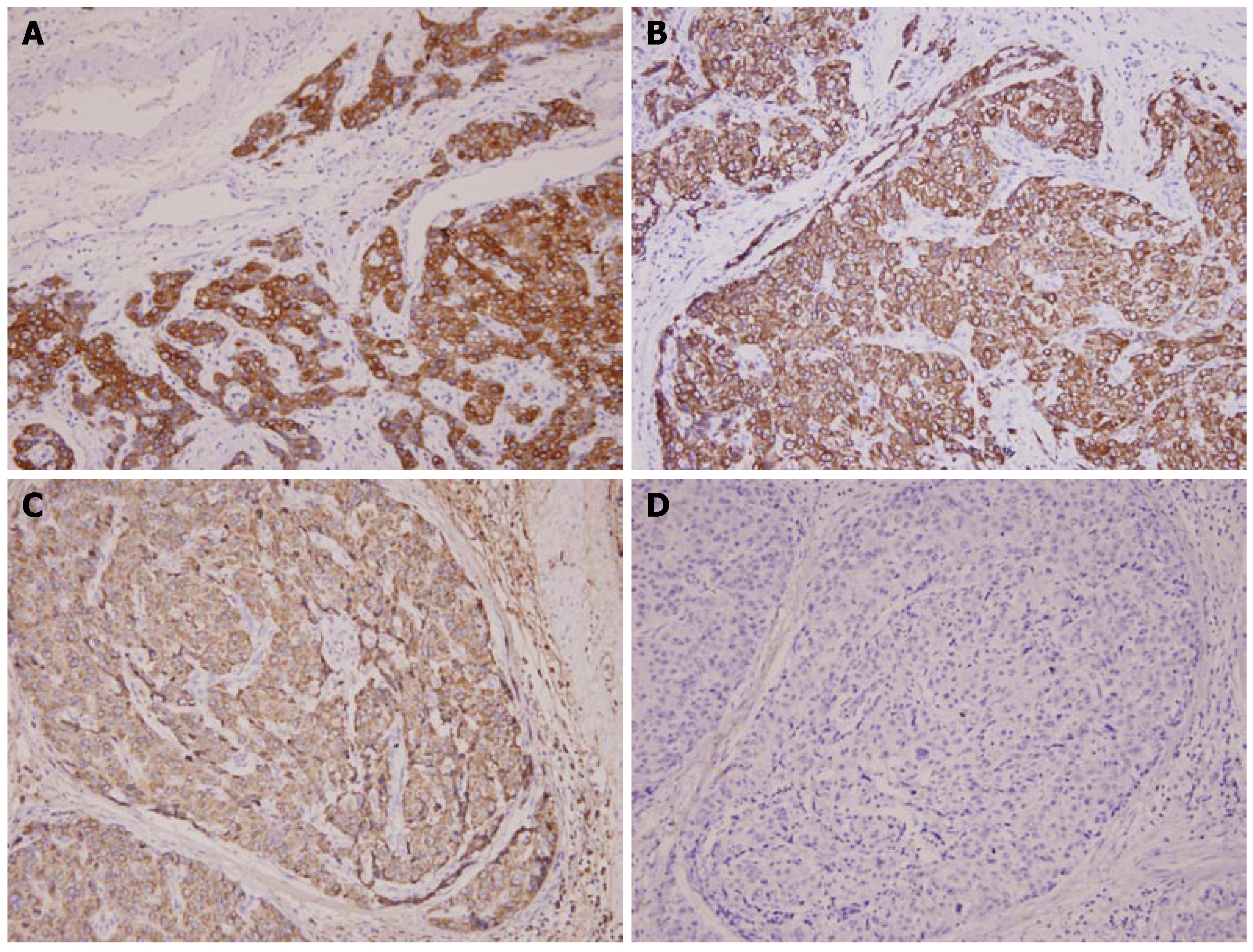 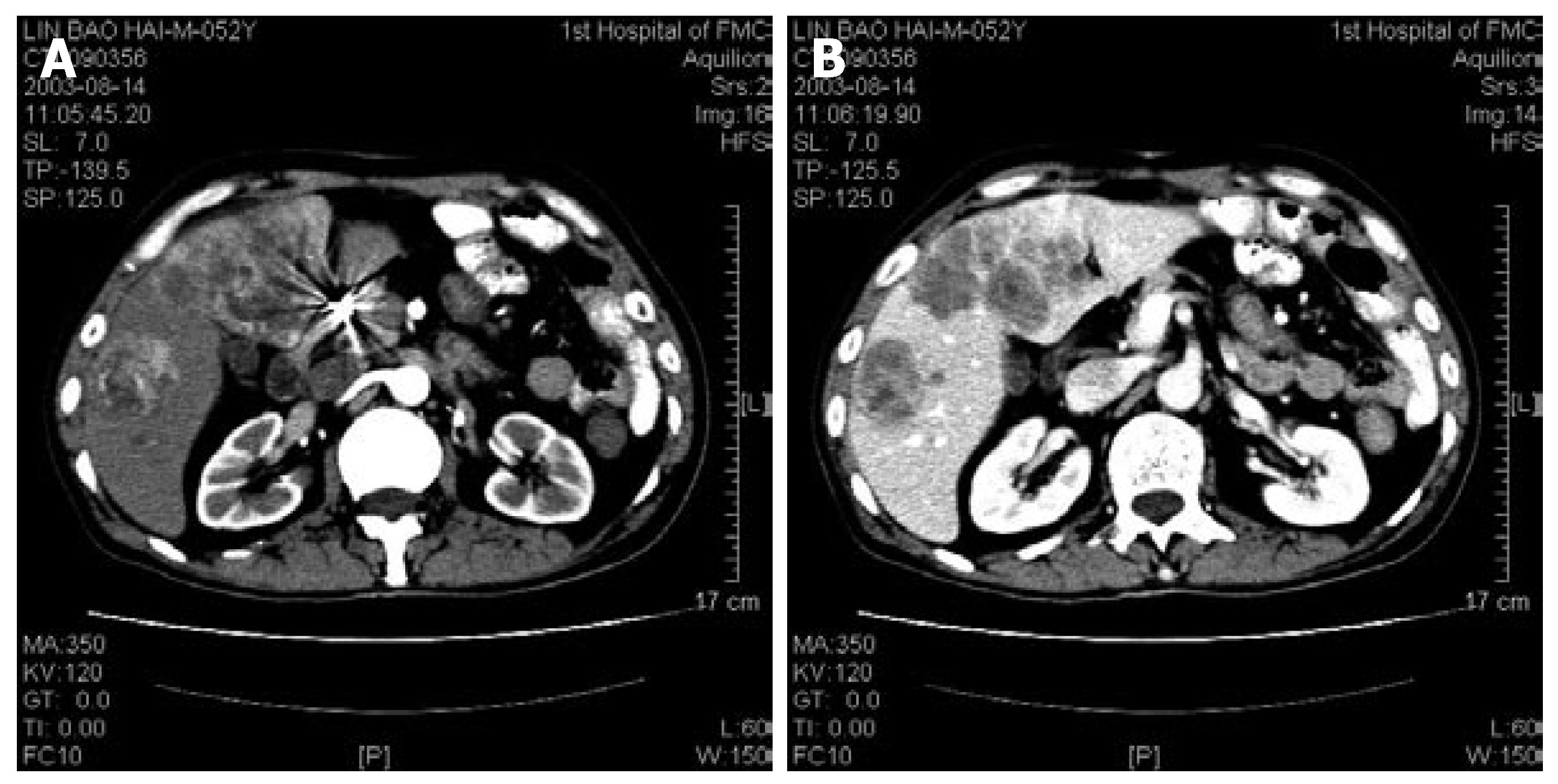 Figure 7 Features of ultrasound examination before operation of the brain metastasis.
DISCUSSION

HAC is a special type of extrahepatic adenocarcinoma and its morphology is strikingly similar to that of hepatocellular carcinoma (HCC). Tumor cells consist of polygonal tumor cells with large central nuclei, prominent nucleoli, and abundant eosinophilic cytoplasm, showing solid growth pattern and less trabecular and glandular as well as frequent lymphatic and vascular invasiveness, regional prominent mitoses, but no bile secretion and periodic acid-Schiff-positive diastase-resistant hyaline globules. HAC has been found in different organs, such as the stomach, lung, pancreas, esophagus, papilla of Vater, colon, bladder, kidney, ovary, uterus, cervix and peritoneal organs[4,5,12-21]. Most patients are males, ranging in age from 40 to 77 years. The antrum and pylorus are the frequent locations of gastric HAC. Most patients with HAC show an elevated AFP serum level. The clinical course of HAC patients is aggressive and poor in survival. The biological behavior of HAC is associated mainly with extensive hematogenous metastasis to the liver and early involvement of lymph nodes. Up to date, only one case of cerebellum metastasis from gastric carcinoma with an elevated AFP level has been reported[7]. However, no report on supratentorial cerebral parenchymal metastasis of gastric HAC is available.

HAC and HCC share numerous clinicopathological features, such as elevated AFP serum level, hepatoid morphology and immunoreactivity with AFP, polyclonal carcinoembryonic antigen (CEA), and alpha-1 antitrypsin[23]. The histopathology of HAC and HCC is extremely similar, thus making the differential diagnosis difficulty, especially when the primary tumor is unknown. Immunohistochemistry of extrahepatic HAC and HCC is positive for AFP, CEA and cytokeratins 8 and 19, but not for cytokeratin 7[23,24]. The immunoreactivity of CK7 was positive in brain metastasis of our patient but negative in primary gastric carcinoma. The inconsistent phenomenon of CK7 immunostaining is unable to explain. Therefore, it is uncertain that the brain metastasis is derived from liver metastasis from gastric HAC or from the primary gastric carcinoma.

Hep-Par-1 is a recently developed new monoclonal antibody that reacts with a hepatocyte-specific epitope. It was reported that the sensitivity and specificity of Hep-Par-1 in HCC are 82% and 90%, respectively[25], suggesting that this antibody is the most sensitive and specific immunohistochemical marker for hepatocyte differentiation[26-28]. In our patient, immunostaining showed that HCC was positive for Hep-Par-1 and extrahepatic HAC was negative for Hep-Par-1.

Brain is one of the frequent hematogenous metastatic sites. It was reported that metastasis accounts for 13% of all brain tumors[9]. Usually, intracranial metastases and primary gliomas can be differentiated based on conventional MRI findings and clinical history. However, in some circumstances, especially when the lesion is solitary and its clinical features are nonspecific, conventional MRI alone is difficult to differentiate them. Although the management of metastases and primary gliomas is different, their morbidity and mortality are similar.

It was reported that the frequent symptoms of brain metastasis in recipients are headache, psychiatric symptom, hemicrania, vision disorder, cortical epilepsy[9]. The present patient had a similar clinical situation and intracranial metastases confirmed by MRI. Of the intracranial metastases, malignant melanomas account for 90%, chorioepithelioma malignum 60%, lung cancers 20%, breast cancers 16%, renal carcinomas 13% and thyroid carcinomas 9%. Brain metastasis of gastric cancer has been found only in about 0.5%-5% of cases reported, in which poorly-differentiated adenocarcinomas account for 27.3%-50%[9,29,30]. Most intracranial metastases from gastric cancer are lymphogenous and occur at meninges. Metastasis to the cerebral parenchyma via the arterial blood flow is rare. In general, patients with brain metastasis from gastric carcinoma have a higher stage of cancer and lymphovascular invasion or lymph node metastasis[9]. It is difficult to predict brain metastasis. If the patients have lymph node metastasis, lymphovascular invasion, or metastasis of other organs, they should be monitored carefully in order to detect brain metastases.

In conclusion, metastasis of gastric hepatoid adeno-carcinoma to the brain is rare. The differential diagnosis of metastatic tumors needs to use a panel of antibodies to avoid confusing with the brain metastasis of HCC. Long-term follow-up and close observation are required to find the symptoms of nervous system after gastrectomy, and early CT or MRI should be performed for the diagnosis of brain metastases. Solitary brain metastases are usually treated with surgery, radiotherapy and chemotherapy.