The detection of focal liver lesions in patients with liver cancer is a very important challenge because failure to detect cancerous lesions can have major clinical consequences. High accuracy in liver cancer detection can improve the efficacy of treatment, including partial hepatectomy, liver transplantation, radiofrequency ablation, percutaneous ethanol injection, transarterial chemoembolization, or (commonly) a combination of these methods[1-5]. Currently, magnetic resonance (MR) is increasingly used in the detection of hepatic lesions[6]. With the use of conventional extracellular contrast agents such as gadolinium chelates, analysis of enhancement patterns on T1-weighted dynamic imaging during the different vascular phases is an important tool in the detection and characterization of focal hepatic lesions. Post-contrast imaging has been shown to be superior to conventional plain MR imaging in detecting hepatic lesions[7]. It is known, however, that 40%-60% of cancer nodules, especially those in cirrhotic liver that are smaller than 10 mm, are missed at ultrasonography (US), computed tomography (CT)[8], and MR[9]. Given this background, a possible solution to this problem is the use of liver-specific MR contrast materials: that is, agents that are targeted to either the hepatocytes or the Kupffer cells. Ferucarbotran is available as a new superparamagnetic iron oxide (SPIO) agent for liver imaging in most European countries and some Asian countries[10,11]. The present study was designed as an open-label, within-patient comparison of the diagnostic performance of non-enhanced, gadolinium-enhanced, and ferucarbotran-enhanced MR imaging, in terms of lesion detection and characterization according to the Phase III clinical trial of ferucarbotran in China. This article is mainly concerned with evaluating efficacy in the detection of hepatic lesions.

The study protocol was approved by the Zhongshan Hospital Ethics Committee. A total of 59 patients (40 men, 19 women; mean age, 48.9 year; age range, 26-68 year) with at least one suspected focal hepatic lesion were enrolled in the study and received test contrast material between December 2003 and July 2004. Each patient gave written or witnessed informed consent and was evaluated for eligibility. Each patient underwent a reference-standard examination. The best method to confirm imaging findings-that is, pathologic confirmation-was unavailable for every patient in this study.

Ferucarbotran (Resovist, Schering, Berlin, Germany) was preloaded into a 2.25 mL connecting intravenous tube (Connection Tubing; Clinico, Bad Hersfeld, Germany) and manually injected as a bolus through a filter with 5-μm pore size; the connecting catheter was flushed with 10 mL of saline solution within 3 s of injection (injection rate, approximately 2-3 mL/s). Patients with a body weight of 60 kg or more received 1.4 mL of ferucarbotran, while those with a body weight of less than 60 kg received 0.9 mL (range, 7.0-12.9 μmol iron/kg); 1 mL ferucarbotran contains 28 mg of iron. Gd-DTPA (Magnevist, Schering, Erlangen, Germany) was manually administered as an intravenous bolus injection at a dose of 0.2 mL/kg (corresponding to 0.1 mmol/kg) with a flow rate of 2-3 mL/s.

MR imaging was performed with a superconducting magnet operating at 1.5T (Signa, GE Medical Systems, Milwaukee, USA). The imaging protocol consisted of pre- and post-contrast imaging at 25, 60, 180, and 480 s after the administration of each contrast material, with an interval of 48 h between the injection of each. Every examination consisted of T2-weighted fast spin-echo (FSE) with fat suppression, T1-weighted fast multiplanar spoiled gradient-recalled (SPGR), and T2* GRE sequences (Table 1). The imaging factors were the same for all patients, and all sequences were performed before and after Gd-DTPA contrast agent and ferucarbotran administration.

According to the surgical and pathologic confirmation or reference examination, all images from the MR imaging sequences were interpreted independently by three radiologists; the number of lesions was then calculated, excluding cysts. Consensus reading was necessary to ensure that both observers assessed the same lesion. Lesions were divided into three groups according to lesion size (< 1 cm, 1-3 cm, > 3 cm).

According to pathologic confirmation and the reference examinations, a total of 133 lesions were present among the subjects (85 lesions were confirmed by pathology; 75 hepatocellular carcinoma lesions, 35 metastatic lesions, 7 dysplastic nodules, 6 hemangiomas, 5 cases of focal nodular hyperplasia, 2 tuberculomas, 1 inflammatory pseudotumor, 2 angioleiomyolipomas). Twenty-one lesions were larger than 3.0 cm, 68 were 1-3 cm, and 44 were smaller than 1 cm. On ferucarbotran-enhanced MR imaging, FSE T2WI with fat suppression revealed 130 lesions, dynamic T1WI GRE revealed 115 lesions, and GRE T2*WI revealed 127 lesions (Figure 1 A-H). On pre-contrast MR imaging, GRE T1WI revealed only 84 lesions and FSE T2WI with fat suppression revealed 106 lesions. Gd-DTPA dynamic-enhanced GRE T1WI revealed 123 lesions (Table 2). Three lesions were not found by any observer on any sequence: All were smaller than 0.8 mm in diameter and were metastases from mammary adenocarcinoma and colorectal cancer. In another patient, a 0.3 mm-diameter subcapsular metastasis was detected only by ferucarbotran-enhanced FSE (Figure 2A-F). 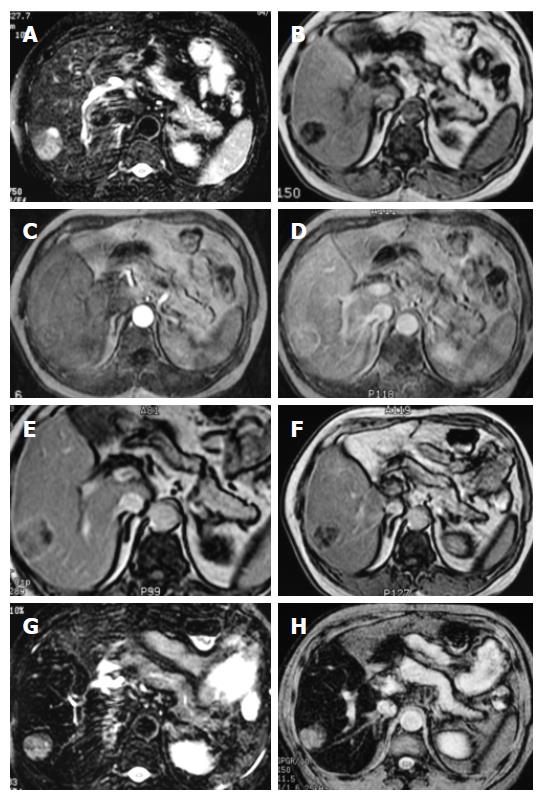 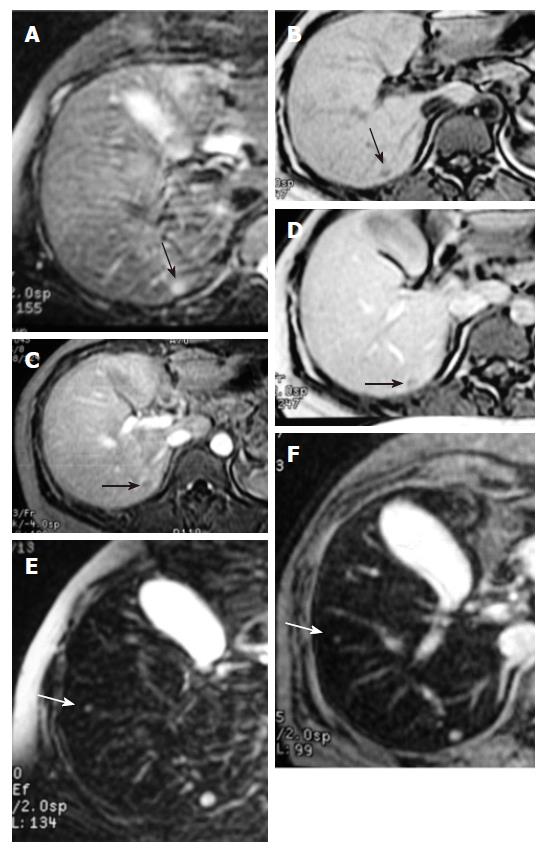 Ferucarbotran contains superparamagnetic iron oxide nanoparticles (maghemite [γ-Fe2O3] and magnetite [γ-Fe3O4]) coated with a carboxydexrean shell, and was developed as a new intravenous liver-specific contrast agent. Its T1 relaxivity is 25.4 mmol/L per second, with T2 relaxivity of 151.0 mmol/L. second. The blood half-life is similar to that of ferumoxides (another SPIO agent), but the mean particle size is smaller (60 nm)[10,11]. Ferucarbotran is taken up by reticuloendothelial system (RES) cells in the liver, spleen, bone marrow, and lymph nodes. Hydrolytic enzymes degrade intracellular SPIO particles causing a loss of R2 relaxivity as the iron loses its crystalline structure [12]. Within minutes of administration, 80% of the injected dose of SPIO agent efficiently accumulates in the liver, while approximately 5%-10% of the injected dose accumulates in the spleen[13-15]. On T2-weighted sequences there is a marked decrease in the signal intensity of normal liver and spleen; because malignant tumor tissue typically lacks a substantial number of Kupffer cells or has a lower activity of phagocytic cells, it appears as hyperintense/bright lesions that are contrasted against the hypointense/black liver[11,16].

In the detection of micro-lesions (< 1.0 cm) in the present study, delayed T2-weighted ferucarbotran-enhanced FSE with fat suppression and T2*-weighted ferucarbotran-enhanced GRE provided higher sensitivity in MR imaging than pre-contrast (T1-weighted GRE) images (93.2% and 88.6%, respectively, vs 34.1%). More lesions were detected on T2-weighted ferucarbotran-enhanced FSE than on dynamic Gd-DTPA-enhanced images in 16%-20% of our patients. It had statistically significant difference in detecting micro-lesions (P = 0.021), which is in agreement with previous studies[11,16-18]. In the present study, even a 0.3 mm-diameter metastasis was detected by T2-weighted ferucarbotran-enhanced FSE with fat suppression. The loss of liver parenchyma signal intensity after ferucarbotran administration improves lesion-to-liver contrast, which in turn improves detection (especially in micro-lesions), visualization, delineation, and overall diagnostic confidence[19] (Figure 3A-D). Although diagnostic confidence is a subjective parameter, it is relevant in the clinical situation because a radiologist must determine the confidence with which findings observed on images are correct. Evaluation of diagnostic certainty was also recommended by Thornbury in his six-tier model of efficacy[20]. Diagnostic confidence conceptualizes the diagnostic thinking efficacy (one tier of the Thornbury model) and links the technical and diagnostic efficacy of a contrast agent to the therapy of the patient. Higher accuracy in liver cancer detection potentially changes the clinical treatment of patients with liver cancer. The report of Ros et al states that the proportionate change in clinical treatment was as high as 59% after examination using SPIO-enhanced MR[21]. For detection of lesions larger than 1 cm, there was no significant difference among the findings of the different sequences (excluding pre-contrast sequences); however, diagnostic confidence was determined for the same reason as that described above. 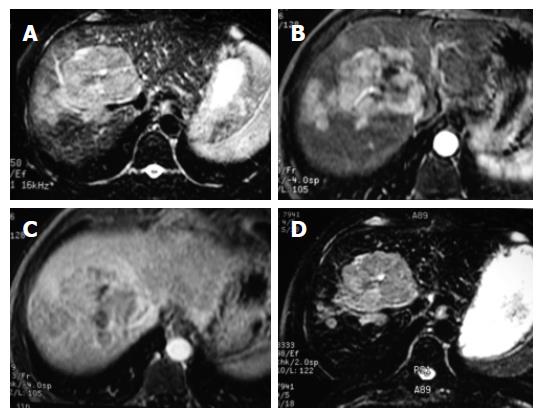 Ferucarbotran is an SPIO agent that can be injected as a bolus[10]. It contains particles with smaller mean hydrodynamic diameter than that of the stock solution, which has a stronger T1-effect and longer blood half-life because of slower uptake into the RES. Previous studies using animals found that iron particles begin attaching to the Kupffer cells 3 min after administration[22]. The R1 relaxivity of ferucarbotran varies considerably within the range of diagnostically applied proton Larmor frequency (i.e., field strength); however, R1 relaxivity at 40 MHz with 12.3 mmol/L per second is still four times higher than the R1 relaxivity of low molecular gadolinium chelates. The very high R2/R1 ratio is characteristic of superparamagnetic colloids of the SPIO type. This ratio varies from 6 to 15 as the Larmor frequency increases from 10 to 40 MHz, a fact which might be in favor of the use of lower imaging fields to better utilize the T1 effect of these materials[12]. In fact, this subfraction contributes to the signal change on T1-weighted images and is the reason why the signal characteristics are comparable to those of angiographic agents with a blood-pool effect. This subfraction also explains the biexponential blood half-life of ferucarbotran, which has also been tested for its capability in contrast-enhanced MRA[23]. Enhancement increased with the degree of T1-weighting and shifted towards higher concentrations with shorter echo times. The T1 effect of ferucarbotran is a function of dose and concentration in plasma, and can be monitored during a time window in which the plasma concentration stays below a certain level depending on pulse sequence parameters. Nevertheless, in the present study, dynamic ferucarbotran-enhanced T1-weighted GRE/FLASH showed no superiority over dynamic Gd-DTPA-enhanced T1-weighted GRE/FLASH in the detection of lesions. The benefit of dynamic T1-weighted MR imaging techniques is in the characterization of lesions; however, in many respects dynamic imaging with ferucarbotran is different from that with Gd-DTPA. In dynamic T1-weighted images obtained with ferucarbotran, the signal increase is observed to be lower but longer lasting, as described by Amelie et al[24].

Ferucarbotran has an advantage over ferumoxides (Feridex, Advanced Magnetics; Guerbet), which is the only marketed SPIO in most countries. Although it is well known that ferumoxides have relatively high R1 values (up to four or five times higher than those of gadolinium-based contrast agents)[10,25,26], these T1 effects cannot be readily exploited for dynamic T1-weighted MR imaging. Bolus administration of ferumoxides has not been recommended because of the possible side effects (lumbar pain and cardiovascular problems, including dose-dependent hypotensive reactions) that positively correlate to the rate of injection; therefore, this compound must be administered as a slow drip infusion[13]. Ferucarbotran used in this study has few side effects[10,11] and can be given as a rapid bolus injection. No adverse reactions were observed in any of the patients in the present study; however, as for any SPIO contrast agent, the efficacy of ferucarbotran depends on the number of Kupffer cells or their activity. For example, some well-differentiated hepatocellular carcinoma lesions still contain a certain amount of Kupffer cells and which could confuse us to make the correct diagnosis[27,28].

In patients with liver cancer, the detection of focal liver lesions is one of the most important challenges. High accuracy in liver cancer detection can improve the efficacy of treatment. It is known, however, that 40%-60% of cancer nodules, especially those that are smaller than 10 mm in cirrhotic liver, are missed on ultrasonography (US), computed tomography (CT) and magnetic resonance (MR).

Ferucarbotran, a liver-specific MR contrast material targeted to the Kupffer cells, is available as a new superparamagnetic iron oxide (SPIO) agent for liver imaging. A current research hotspot involves the evaluation of two contrast media for their efficacy in detecting hepatic lesions.

Ferucarbotran is a safe contrast material for MR imaging of focal liver lesions. The use of ferucarbotran-enhanced images improves diagnostic confidence and lesion detection, especially in the detection of micro lesions.

SPIO agent is a liver-specific contrast agent that contains superparamagnetic iron oxide nanoparticles coated with a carboxydexrean shell. Ferucarbotran is taken up by reticuloendothelial system (RES) cells in the liver, spleen, bone marrow, and lymph nodes.

The effectiveness of ferucarbotran-enhanced MR imaging in the detection of hepatic lesions is known. The present study compares the diagnostic efficiency of three MR imaging sequences in patients with focal hepatic lesions. The scientific value of this manuscript is demonstrated.