We present a case of a 70-year-old man with congenital TEF. The TEF was successfully diagnosed by multidetector-row computed tomography (CT) esophagography.

A 70-year-old man was admitted to our hospital with the complaint of severe cough and choking after swallowing liquid. The patient had done well until 7 mo prior to the admission. Then increased symptoms of cough and dysphagia were developed. Esophagoscopy showed a depressed lesion that looked as if it was punched without inflammation at a distance of 23 cm from the incisors in the middle intrathoracic esophagus, but the fistula opening was invisible (Figure 1). Histological examination of the esophageal biopsy specimens had only normal findings. A multidetector-row CT scan using Aquilion M8 (Toshiba, Tokyo, Japan) was performed with 3-dimensional reconstruction. A nasogastric tube was inserted into the esophagus during the examination, and the esophagus was inflated with oxygen flow (1L/min). The CT scanning parameters were 120 kVp, 200 mA, 8 × 0.5 mm collimation, a pitch of 10.0, and a 0.3-mm reconstruction interval. CT esophagography revealed the presence of a TEF (Figure 2). Conventional barium esophagography was not performed for the patient. 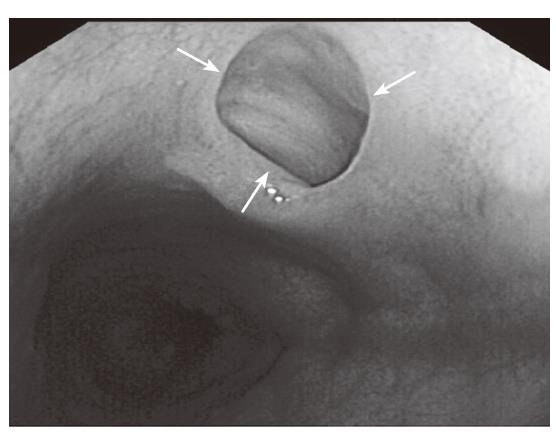 Figure 1 Esophagoscopy reveals a depressed lesion (arrows) that looked as if it was punched at a distance of 23 cm from the incisors in the middle intrathoracic esophagus (E). 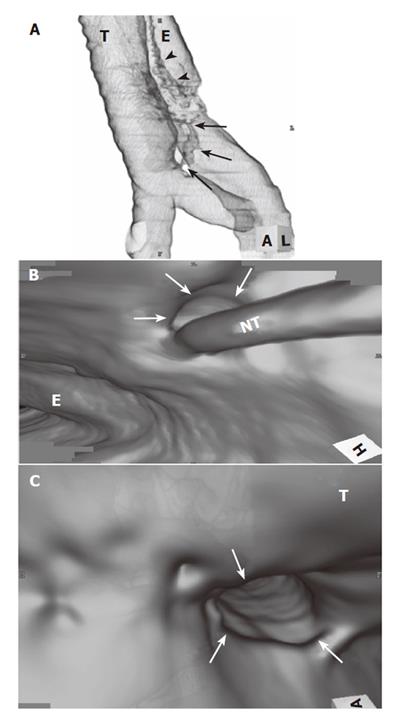 Figure 2 A: CT esophagography demonstrates communication between the middle intrathoracic esophagus and the distal trachea just proximal to the carina (arrows). Note a distortion caused by tube inserted into the esophagus (arrowheads). T, trachea; E, esophagus. B: Virtual esophagoscopy shows the orifice of the fistula (arrows) and it is similar to that of (conventional) esophagoscopy (Figure 1). NT, naso-gastric tube; E, esophagus. C: Virtual bronchoscopy also demonstrates the orifice of the fistula (arrows). T, trachea.

The patient underwent a right posterior lateral thoracostomy. The fistula was identified between the middle intrathoracic esophagus and the distal trachea. There was no evidence of inflammation or adherent lymph nodes around the fistula. The fistula was divided and closed using endostapler (EndoGIA Universal stapler®; US Surgical Corporation, Norwalk, Conn.), and covered with an intercostal muscle flap to avoid the recurrence of fistula. Intraoperative esophagoscopy was found to be useful for the definitive localization and complete excision of the fistula and the avoidance of stenosis of the esophagus. Pathological examination of the resected specimen revealed that the fistula was lined by benign squamous epithelium with the muscularis mucosa, and there was no evidence of malignancy, infection, or chronic inflammation (Figure 3). The postoperative course was uneventful. At 18 mo follow-up, there was no clinical or radiographic evidence of recurrence of the fistula. 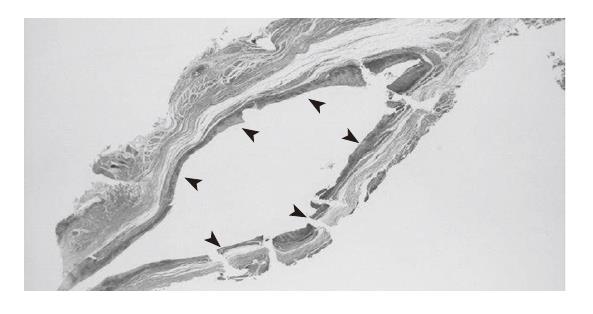 Figure 3 Pathological examination of the resected specimen revealed that the fistula was lined by benign squamous epithelium with the muscularis mucosa (arrowheads).
DISCUSSION

Congenital TEF or bronchoesophageal fistulas were first reported by Negus in 1929 and Gibson in 1696[8]. These congenital fistulas are still controversial and rare clinical problem in adults. Generally, the criteria for the diagnosis of a congenital fistula in adults has the following features: absence of past or present surrounding inflammation or malignancy, complete recovery after resection, and the presence of normal mucosa and absence of adherent lymph nodes[1,2,7]. We could confirm our case as a congenital TEF by the above mentioned features, even though it was found in a 70-year-old man.

The anatomy of TEF should be shown before surgery because the surgical approach depends on a correct evaluation of TEF. Conventional barium esophagography is considered to be the most sensitive test for diagnosing tracheoesophageal or bronchoesophageal fistula[9,10]. Other examinations that have been used but are less successful include esophagoscopy, bronchoscopy, and bronchography[9,10]. Three-dimensional (3D) displays of many organs and structures using multidetector-row CT have recently become a popular clinical examination tool with significant improvement which was made on quality of image due to a rapid progress in computer technology[11-13]. Multidetector-row CT esophagography correctly showed TEF in our case. Images of TEF could be easily made and provide crucial information for planning surgery. Fitoz et al reported that 3D CT imaging are used to assist in the diagnosis of TEF[14].

Fitoz’s and our experience indicates CT esophagography might be clinically useful for the accurate diagnosis of tracheoesophageal fistula. CT esophagography without contrast medium is less invasive examination.