The aim of the present review was to summarize the current evidence on the role of ultrasonography (US) and doppler-US in the diagnosis of celiac disease.

Several ultrasonographic signs have been reported in the association with celiac disease in studies using real-time US. Firstly, case control studies identified some of these US signs and then in a prospective series some of these parameters, due to their high specificity, have been shown to be of value in confirming CD diagnosis, whereas others, due to their high sensitivity, have been demonstrated to be useful in excluding the presence of the disease.

The pattern of splanchnic circulation in CD have extensively been investigated by several studies all of which reported similar results and identified a hy-perdynamic mesenteric circulation that reverts to no-rmal values after successful a gluten-free regimen.

The last part of this review will deal with the possible role of US in identyfing the most severe and common intestinal complication of CD, i.e. the enteropathy-associated T cell non-Hodgkin lymphoma.

Celiac disease (CD) is a chronic systemic autoimmune disorder, whose prevalence in the general population ranges from 0.2 to 0.94[1]. It occurs when the small bowel mucosa of susceptible subjects is damaged by dietary gluten, and its clinical picture ranges from mild to severe forms. The most frequent findings include chronic diarrhea, iron-deficiency anemia and dyspepsia. The diagnosis is supported by the determination of endomysial (EmA) and tranglutaminase (tTG) antibodies, characterized by a high sensitivity and specificity (> 85% and nearly 100%, respectively) and confirmed by consistent histological duodenal findings[2]. Clinical, serological and histologic characteristics have recently been extensively reviewed[1].

As reported above, clinical manifestations are proteiform and complications include refractory sprue, enteropathy-associated-T-cell-lymphomas (EATL), carcinoma of the oropharynx, esophagus and small bowel, ulcerative jejuno-ileitis and collagenous sprue[3-7].

In patients with gastrointestinal symptoms abdominal ultrasonography (US) represents the initial imaging technique, whose accuracy has recently been markedly improved by the widespread availability of high resolution equipment. In this context several ultrasonographic signs have recently been reported[8-12] and some of them have been proved to be of value in supporting or ruling out CD[13]. This review deals with the role of abdominal and doppler ultrasonography in detecting the presence of celiac disease and in assessing its most frequent com-plication, i.e. EATL.

ABDOMINAL ULTRASOUND IN THE DIAGNOSIS OF CELIAC DISEASE

Different US signs have been proved to be of value in suggesting the presence of CD, case reports[8-10] and two preliminary retrospective case-control studies, done in a pediatric[11] or adult setting[12] respectively. In the former series by Riccabona et al[11], which included 39 children with overt malabsorption and histologically proven CD (Table 1), an “abnormal” aspect of small intestine was observed in 36 cases (92%), consisting of increased peristalsis in 32 (82%) and free abdominal fluid in 30 cases (76%); interestingly, a pericardial effusion was observed in half of the cases. Based on the above findings the Authors concluded that even if intestinal biopsy still remains the reference standard for diagnosing CD, the awareness of CD-associated sonographic abnormalities could accelerate diagnostic work-up and the introduction of gluten-free diet (GFD). The second study, by Rettenbacher et al[12], included 11 adults with histologically proven CD and 20 healthy subjects (Table 2). An increase in intraluminal fluid content (11 cases), the presence of a moderate small bowel dilatation (8 cases) and of an increased peristalsis (8 cases), and the presence of moderate bowel wall thickness (7 cases) represented the most relevant findings. Other extra intestinal signs, as mesenteric lymph node enlargement, free abdominal fluid, superior mesenteric artery or portal vein dilatation , hepatic steatosis were also identified, with an overall frequency ranging from 52 to 84%. None of the healthy controls showed abnormal US signs.

Both the above series were aimed to answer a phase I question (i.e. are the results of the index test in patients with a target disorder different from those in controls). These type of studies have the advantage of being relatively quick and cheap to perform and serve as a promoter for further studies; however they could be affected by the presence of a possible “spectrum bias” as only patients with fully expressed disease are usually studied[14].

As a consequence, these types of studies should be confirmed in larger prospective cohorts to obtain both higher precision and wider generalizability.

In a recent study[13], we have prospectively evaluated the diagnostic accuracy of different US signs in predicting CD in a cohort of 162 consecutive patients investigated for chronic diarrhea (# 105), iron-deficiency anemia (# 25) and dyspepsia (# 32) (i.e. frequent CD manifestations), and characterized by a pre-test probability of the disease ranging from 5 to 10 % as estimated from a previous series[15]. All patients underwent anti-endomysial IgA antibodies determination and duodenal biopsy. Two operators, blind to both the clinical, serological and histological findings evaluated six US signs represented by fasting gallbladder volume, transverse diameter of small bowel loops, small bowel wall thickness, peristaltic pattern, presence of free abdominal fluid, and diameter of the mesenteric lymph nodes.

Twelve patients (7 %): six male and six female, aged 16-77 years with a mean of 49 ± SD 17 years, had EmA positive and duodenal histologic findings consistent with Marsh’s grade III -IV (11 and one cases, respectively). In detail, seven cases were observed among those with chronic diarrhea (6.7 %), four among those with iron-deficieny anemia (16 %) and one among dyspeptics (3.1%). The frequency of the above mentioned US findings was comparable in pauci-symptomatic celiacs and those with fully expressed disease. Of the 150 EmA negative cases, none had duodenal histology consistent with CD; 72 (48 %) and 78 (52 %), were eventually diagnosed as having functional or organic disease, respectively. In the latter group, an ileal involvement was observed in nine cases (six with Crohn’s disease and the remaining three with a final diagnosis of giardiasis and common variable immunodeficiency, primary lymphangiectasia and ileal carcinoid, respectively). Interestingly, in those patients with ileal Crohn’s disease, US pattern differed completely from that observed in celiac patients based on a localised and marked bowel wall thickening. The details concerning the diagnostic accuracy of the six US signs evaluated are given in Table 3. In particular, the positive likelihood ratio (LR+) > 10 observed for increased GB volume, free abdominal fluid and enlarged mesenteric lymph nodes allowed a confirmatory strategy, whereas the negative likelihood ratio (LR-) of 0.1, observed for dilated small bowel loops and increased peristalsis, supported an exclusion strategy.

The k values ranging from 0.76 (for increased peristalsis) to 0.95 (for dilatation of small bowel loops) supported the good inter-observer agreement in the evaluation of the above reported US signs. Interestingly, strict gluten-free regimen obtained EmA negativization and a complete reversal of US abnormalities at one year.

In conclusion, the finding of increased GB volume, abdominal free fluid and mesenteric lymph nodes enlargement reliably and accurately predicts CD, whereas the lack of intestinal dilatation and increased peristalsis makes it possible to rule out the diagnosis. The specificity of US was maximized up to 99 % in the presence of all the six US signs considered, with an obvious decrease in sensitivity (33 %); moreover an LR + value of 50 allowed a confirmatory strategy accounting for a PPV of 80 %. Co-nversely, in the presence of at least one US sign, sensitivity was 92 % with a negative likelihood ratio value of 0.10 and a NPV of 99 %, a diagnostic performance that was comparable to that of dilated small bowel loops.

Taking into account the above results, the actual role of US in the diagnostic strategy of celiac disease should be probably modulated according to the prevalence of the disease in the population under examination. As from Figure 1, the choice of the initial test depends on the estimated level of suspicion. In case of low CD prevalence (e.g. ≤ 10 % ), the negativity of the US signs, mainly the lack of “dilated small bowel loops with increased fluid content”, can more effectively exclude the diagnosis and also can be very useful in discriminating functional from organic disease. Conversely, the concomitance of all the six US signs increases the probability from 10 to up 84 %, still requiring a confirmatory intestinal biopsy. Facing with a moderate probability of CD (e.g. of about 30 %) both IgA EmA testing and US can confirm the diagnosis, based on a PPV > 90 %, a level at which the diagnostic role of histology could be challenged. Finally, independently of the test sequence, in the presence of both US and EmA results negativity, CD diagnosis can be confidently excluded as the post-test probability drops to less than 1% (NPV 99%). Obviously, in case of discordance, duodenal histology remains mandatory. 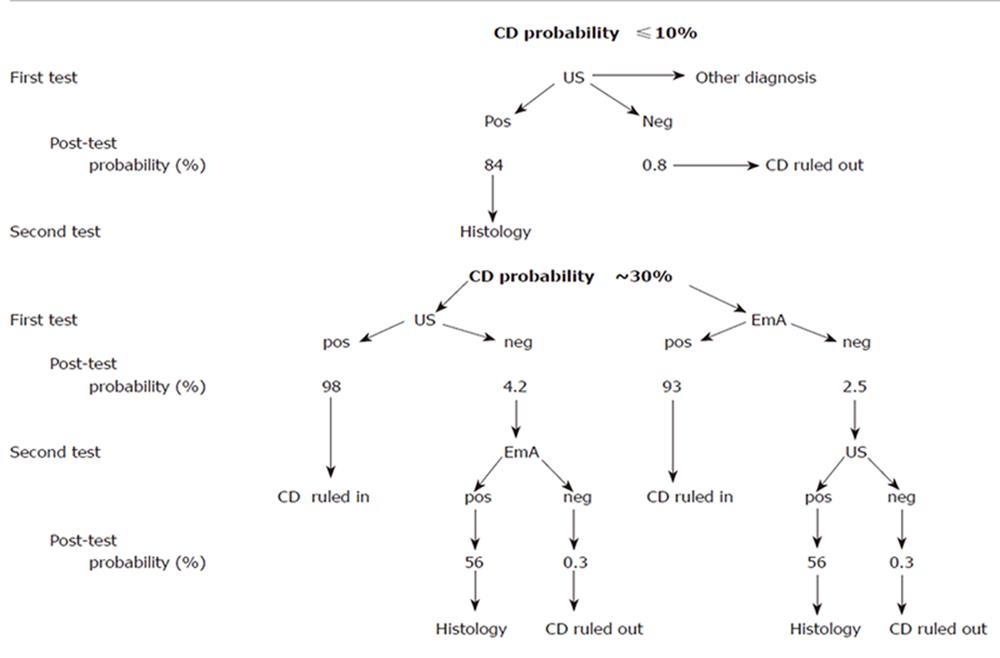 Figure 1 Diagnostic algorithm for celiac disease (CD), according to different pre-test probabilities of the disease. The post-test probability was calculated considering as a negative test the absence of “dilated small bowel loops with increased fluid content” (which showed the highest sensitivity: 92%, and the lowest LR- : 0.10) and as a positive test the presence of “all six US signs” (which has the highest specificity: 99%, and the highest LR+: 50). The post-test probability for EmA was calculated considering a LR+ of 31 and LR- 0.06 (where LR indicate the likelihood ratio)(2).

Overall, ultrasonography can accurately predict celiac disease but its place in the diagnostic algorythm should be varied according to the probability of the disease in a given population.

Basal and postprandial splanchnic blood flow (i.e. that in superior mesenteric artery, SMA, and portal vein, PV) was assessed in celiacs by doppler-US. Uniformly, in fasting condition, there was an increase in SMA velocity and flow, with lower resistivity index , and a higher PV velocity and flow as compared to controls[16-19]. As a consequence, when determined in postprandial phase all the above mentioned parameters showed a significantly lower variation as compared to that observed in healthy subjects[17,19]. Once again, successful long term gluten-free diet reverted all the above abnormalities.

Enteropathy-associated T cell non-Hodgkin lymphoma (EATL-NHL), whose annual incidence is nearly 0.5-1 per million people, is actually confined to patients with a previously or concomitantly diagnosed CD, and also complicates the refractory form of the enteropathy. Moreover, an increased risk of small bowel adenocarcinoma, an exceedingly rare malignancy with an annual incidence rate of 0.6-0.7 per 100 000 of general population(6), has also been reported.

In the presence of both these neoplasms, the typical US pattern is closely similar with evidence of the so called “bull’s eye”-, “target”- or “pseudokidney” sign related to an eccentric and localized bowel wall thickening(20).

In the above conditions, US is useful in both the disease location and staging; furthermore, it also allows both a detailed characterization of adjacent or distant lymph nodes and their sampling for histology , whenever indicated.

Overall, however, US should not be considered a first level technique in diagnosing superimposed intestinal lymphoma in CD patients, based on its low sensitivity even if performed by well trained operators. Accordingly, US as to be considered as ancillary to endoscopy in identifying and staging EATL in CD patients.