Benign multicystic peritoneal mesothelioma (BMPM) is a rare tumor that occurs mainly in women in their reproductive age. The pathogenesis of BMPM is unclear and a controversy regarding its neoplastic and reactive nature exists.

The biological behavior of BMPM is characterized by its slowly progressive process and high rate of recurrence after surgical resection. In addition this lesion does not present a strong tendency to transform into malignancy. Today approximately 130 cases have been reported.

We here report a 62-year-old woman who had diffuse abdominal pain, nausea and vomiting. Physical examination revealed a painful mass in her upper abdomen. She reported a mild dehydration, but the vital signs were normal. Peristaltic rushes, gurgles and high-pitched tinkles were audible. Upright plain abdominal film revealed small bowel loops with air-fluid levels. She was diagnosed having an incarcerated incisional hernia that resulted in intestinal obstruction. The patient underwent surgery during which a cystic mass of the right ovary measuring 6 cm x 5 cm x 4 cm, four small cysts of the small bowel (1 cm in diameter) and a cyst at the retroperitoneum measuring 11 cm x 10 cm x 3 cm were found. Complete resection of the lesion was performed. The patient had an uneventful recovery and had no recurrence two years after surgery.

Benign multicystic peritoneal mesothelioma (BMPM), also known as multilocular peritoneal inclusion cysts, is an uncommon lesion arising from the peritoneal mesothelium that covers the serous cavity. This lesion occurs most frequently in women during their reproductive years[1-3] and is associated with a history of previous abdominal surgery[4], endometriosis[5,6] or pelvic inflammatory disease[4]. However, there are reports concerning men[7-9] or children[10-11], as well as rare extra-abdominal cases[12-14]. To date, approximately 130 cases have been reported[1,6,8,15-18]. While the origin of the disease is known, the pathogenesis and pathological differential diagnosis remain unclear and controversial. We here report a case of BMPM admitted to our department with a review of the literature.

A 62-year-old woman was referred to the Surgical Outpatient Department due to diffuse abdominal pain, nausea and vomiting for 24 h. On physical examination a painful mass in the upper part of a median subumbilical incision was palpated. She reported a history of hysterectomy five years earlier. A mild dehydration was noted, but the vital signs were normal. Peristaltic rushes, gurgles and high-pitched tinkles were audible. An upright plain abdominal film revealed small bowel loops with air-fluid levels. She was diagnosed having an incarcerated incisional hernia that resulted in intestinal obstruction. The patient underwent an emergency surgery during which a cystic mass of the right ovary measuring 6 cm × 5 cm × 4 cm, four small cysts of the small bowel (1 cm in diameter) and a cyst at the retroperitoneum measuring 11 cm × 10 cm × 3 cm were revealed. Complete resection of the lesion was performed. The pathology report was benign multicystic mesothelioma of the ovary, bowel and peritoneum (Figure 1). The patient had an uneventful recovery and was closely followed-up by US and CT. She remained free of symptoms and had no recurrence two years after surgery. 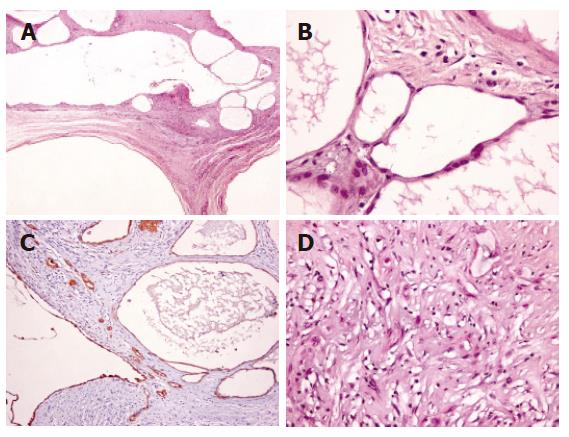 Figure 1 Histological and immunohistochemical findings in benign multicystic mesothelioma (A-C) and in ovary adenomatoid tumor (D) within collagenous stroma (A: HE x 20; B: HE x 400; C: AE1/AE3 x 100; D: HE x 400).
DISCUSSION

BMPM was first described in 1979 by Menemeyer and Smith[19]. Since then approximately 130 cases have been reported[20] and the information regarding BMPM is derived from a small number of patients from one institution or from isolated case reports. There are larger series reported from pathologist consultation files with patients from different institutions with incomplete clinical information and lack of long-time follow-up data[1,17]. Therefore, this disease is classified as an exceedingly rare medical entity, which challenges its origin, pathogenesis, diagnosis and therapy.

BMPM, a localized tumor arising from the epithelial and mesenchymal elements of the mesothelial cells, does not metastasize. It has a strong predilection for the surface of the pelvic viscera. When the tumor is found in the peritoneal cavity, lesions are found intimately attached to serosal surfaces of the intestine and omentum or in the retroperitoneal space, spleen and liver[21].

The pathogenesis of BMPM is a controversial entity. Some authors believe that the lesion is neoplastic, while others favor a reactive process[1,15-17,22]. The close relationship with inflammation, a history of prior surgery, endometriosis or uterine leiomyoma suggests that BMPM is probably a peculiar peritoneal reaction to chronic irritation stimuli, with mesothelial cell entrapment, reactive proliferation and cystic formation. Microscopic examination of the lesion reveals an inflammatory component in many cases. The close association of BMPM with familial Mediterranean fever characterized by periodic fever and peritonitis reinforces this assumption[23].

Other authors have proposed a neoplastic origin based on a slow but progressive growth of the untreated lesions, a marked tendency to recur after surgical resection, a low incidence of previous abdominal infection and a high disease-related mortality[1,15]. Malignant transformation of BMPM, an unusual occurrence, indicating a neoplastic nature underscoring the necessity of long-term follow-up has also been reported[20].

BMPM is rarely associated with adenomatoid tumor, another benign mesothelial lesion with its neoplastic and hyperplastic pathogenesis still argued[24]. Tumors with mixed histological features of multicystic mesothelioma and adenomatoid tumor have also been reported[24,25]. These facts indicate that a histogenetic relationship has led some authors to suggest that BMPM represents possibly a borderline lesion between an adenomatoid tumor and a malignant mesothelioma.

Pathological differential diagnosis includes a number of benign and malignant lesions that present as cystic or multicystic abdominal masses. Benign lesions include cystic lymphangioma (cystic hygroma)[8,15], cystic forms of endosalpingiosis[26,27], endometriosis[28], mullerian cysts involving the retroperitoneum[29], cystic adenomatoid tumors[30] and cystic mesonephric duct remnants[1]. Malignant lesions include malignant mesothelioma[17] and serous tumors involving the peritoneum[17]. Among the benign lesions, the most important differential diagnosis is BMPM from cystic lymphangioma and adenomatoid tumor. Cystic lymphangioma is restricted to the mesentery, omentum, mesocolon and retroperitoneum but rarely reported in the ovary. On gross examination the cystic component is often chylous and microscopic examination reveals bounds of smooth muscle and aggregates of lymphoid tissue. The cystic spaces are lined by a single layer of flattened endothelial cells which are immunoreactive to vascular markers (CD31, CD34, factor VIII, and VEGFR3). Cystic adenomatoid tumors are easily confused with BMPM on macroscopic and histological examination. However, the cystic component is usually accompanied with a recognizable solid component. Occasionally short papillae lined by mesothelial cells are seen. There are cases of tumors with mixed features of both adenomatoid tumor and BMPM[24,25], indicating that the two lesions are probably pathogenetically related. Cystic forms of endosalpingiosis differ from BMPM by the presence of a tubal type epithelium that may include peg cells, ciliated cells and/or secretory type cells. Blunt papilae and psammoma bodies may also present. The so-called “florid cystic endosalpingiosis” with multicystic involvement of either uterine or extrauterine sites appears to represent the extreme examples of this process[26,27]. Endometroid cysts typically containing dark chocolate-brown materials are composed histologically of endometrial stroma lined by endometrial-type epithelium. Commonly there is evidence of old or recent hemorrhage. Mullerian cyst is another benign condition that may be confused with BMPM. Nevertheless, as its name implies, it is composed of mullerian-type serous or mucinous epithelium containing smooth muscle fibers in the wall. The malignant conditions that mimic BMPM can be easily differentiated on the basis of malignant features including cellular atypia, increased mitotic count, abnormal mitoses and destructive infiltration of the underlying stroma.

In most cases, BMPM remains silent in abdominal cavity and may invade several underlying organs, and more rarely the retroperitoneum[31]. Sometimes BMPM is manifested as acute abdomen. In the case described here the first sign of the lesion was revealed only during surgery, which was performed on an emergency basis. In fact, most patients are diagnosed incidentally during examination or laparotomies for other reasons. The available modern imaging techniques, such as ultrasonography, computerized tomography and magnetic resonance imaging, can demonstrate the lesion. However a differential diagnosis is difficult to be made from other cystic neoplastic or inflammatory lesions arising from these anatomical areas[32-34]. From a clinical point of view, the differential diagnosis of BMPM from cystic tumors of ovaries is most important, since BMPM may be treated by local excision with preservation of the ovaries. Preoperative fine-needle aspiration biopsy of cystic lesions may help the differential diagnosis[35-37]. The diagnosis can be confirmed by electron microscopy and immunohistochemistry[38]. Benign cystic neoplasm with which BMPM is most likely confused is cystic lymphangioma, which occurs more commonly in males and may develop in children as well[17], but rarely recurs[8].

Surgery is the only effective treatment for BMPM. Complete removal of the cystic lesion if possible, remains the mainstay of treatment and the only hope to avoid local recurrence. Aggressive surgical approaches including cytoreductive surgery with peritonectomy are recommended[39]. However, some investigators who support more conservative methods particularly claim that treatment options and timing of surgery should be made individually based on the benign morphologic pattern of the lesion[40]. The laparoscopic approach has also been attempted[41,42]. Recurrences occur more frequently in women and can be shown by CT guided cystic aspiration[43], and treated by hormonal therapy with anti-oestrogens[44] and gonadotrophin-releasing analogues[45], hyperthermic intraperitoneal chemotherapy[46,47], and sclerotherapy with tetracycline[48]. In any case the degree of success following these procedures varies. Adjuvant chemotherapy and radiotherapy are not indicated because these tumors have a prevailing benign character.

In conclusion, BMPM is a rare benign cystic tumor. Although its recurrence is high after surgical resection, it does not present a tendency to transform into malignancy. Two cases of malignant transformation[20,49] out of the approximately reported 130 cases cannot establish the incidence of this change, even if its neoplastic nature is supported. Finally, a prolonged systematic follow-up of these patients, perhaps for life, is required since the lesion usually reappears and further resection or other therapy may be indicated. Moreover, this strategy may lead the investigators to have a definite aspect concerning the biological behavior of the disease.