Wistar rats (obtained from the Experimental Animal Center of Yanbian University College of Medicine) of either sex weighing 300-350 g were anaesthetized by a lethal dose of abdominal cavity injection of pentobarbital sodium (30 mg/kg), and the abdomen of each rat was opened along the midline. Because the rat stomach demonstrates significant regional differences in structure, we separated the stomach into three regions: the fundic or fundus, the cardiac, and the pyloric region or antrum (Figure 1). 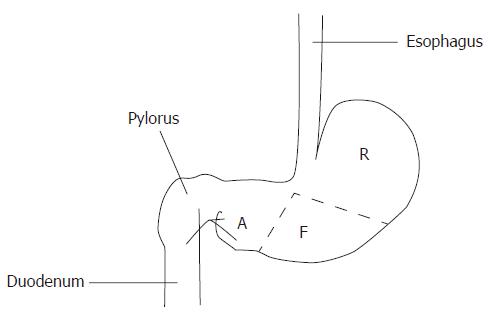 Freshly excised atria and stomach were fixed in 40 g/L formaldehyde fixative and embedded in paraffin. Sections (5 μm) were deparaffinated, rehydrated and incubated with 3 mL/L hydrogen peroxide in methanol for 15 min at room temperature to block endogenous peroxidase activity. After washing twice with phosphate-buffered saline (PBS) for 5 min, tissue sections were incubated at 37°C for 20 min with blocking solution. Sections were incubated at 37°C for 2 h with primary antibody: rabbie anti-rat ANP (sc-20158, Santa Cruz Biotechnology, Inc) 1:100. After washing twice with PBS (0.01 mol/L, pH7.4) for 10 min, tissue sections were incubated at 37°C for 30 min with biotin-anti-rabbit IgG. After washing two times in PBS for 5 min, the sections were incubated with streptavidin-HRP for 30 min. Then the sections were washed two times in PBS for 5 min, and they were incubated with metal-enhanced 3,3-diaminobenzidene solution for 15 min, then they were washed two times in distilled water and counterstained with hematoxylin. Negative control sections were incubated with normal rabbit serum instead of primary antibody. The positive staining for ANP-synthesizing cells was expressed as red brown granules, which were mainly located in cell cytoplasm under microscopy. At least 5 high-power (× 400 field) fields were chosen randomly for cell counting. The ratio of the positive distribution of ANP-synthesizing cells was calculated by dividing the number of positive cells over the total number of cells, and was expressed as percentage, counted , analyzed under the CMIAS image analysis system (Beihang, China), and photomicrographed (Olympus PM-10AD).

The gastric microvessels in density and distribution were investigated in different regions of stomach. After the experimental rats (Wistar rats) were perfused with 20 g/L compound fixative tannic acid solution, the stomachs were taken out and cut into frozen sections, then these sections were immersed in 20 g/L ferric chloride solution at room temperature for 20 min to reveal the microvessels. The blood vessels were revealed distinctively by TA-Fe staining method, and observed under the light microscope, the density and distribution of the vessels were measured and analyzed by CMIAS image analysis system. Density and distribution of microvessels in rat stomach was determined according to the KONG Xiang-yu et al method[13], and was photomicrographed (Olympus PM-10AD, Japan).

Data were expressed as mean ± SD. The two-tailed χ2 test was used to examine the correlation between ANP-synthesizing cells and microvessel density. Statistical significance was estimated by t test. Differences were considered significant when P < 0.05. All the calculations were performed using SPSS11.0. 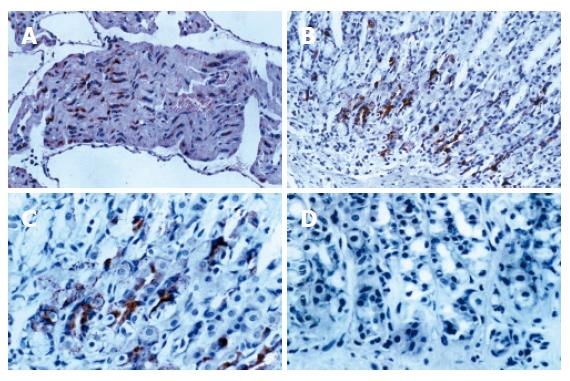 The gastric mucosa was cut into ultra-thin sections, and situs ultrastructural detection of ANP-synthesizing cells was carried out using a post-embedding immunogold labeling technique under electron microscope. The localization of immunogold labeling was displayed in the endocrine granule of the enterochromaffin (EC) cell of DNES (disperse or diffuse neuroendocrine system, DNES) in gastric gland of rat (Figure 3A). These results indicate that the EC cell synthesizes and secretes ANP in gastric mucosa of rat. In negative control, complete absence of positive staining was observed when normal rabbit serum was substituted for anti-ANP antiserum (Figure 3B and C). 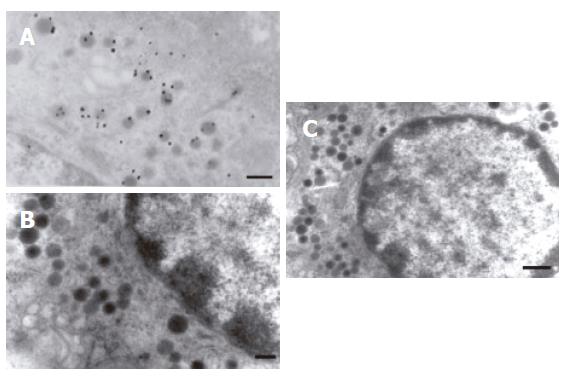 The distribution of ANP-synthesizing cells (enterochromaffin cell, EC cells) in the different regions of gastric mucosa was detected using a histochemical technique in rats. It has been identified that EC cell is only a chromaffin cell in the rat gastric mucosa. Consecutive serial sections were stained for chromaffin and the chromaffin granules (brown granules) were localized in EC cell cytoplasm. Negative staining for chromaffin granules were detected in the lamina propria, submucosa, smooth muscle and in negative control. The distribution of EC cells in gastric mucosa was further examined using chromaffin staining. There were three histologically distinct regions (cardia, fundus and antrum) in the distribution of EC cells in rats. EC cells existed in mucosal layer, and its density was the largest in gastric cardia, and the density order of EC cells (mean ± SD) was cardiac region > pyloric region > fundic region in mucosal layer (Figure 4, n = 18). 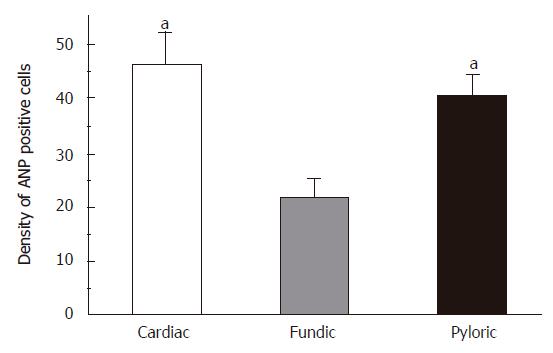 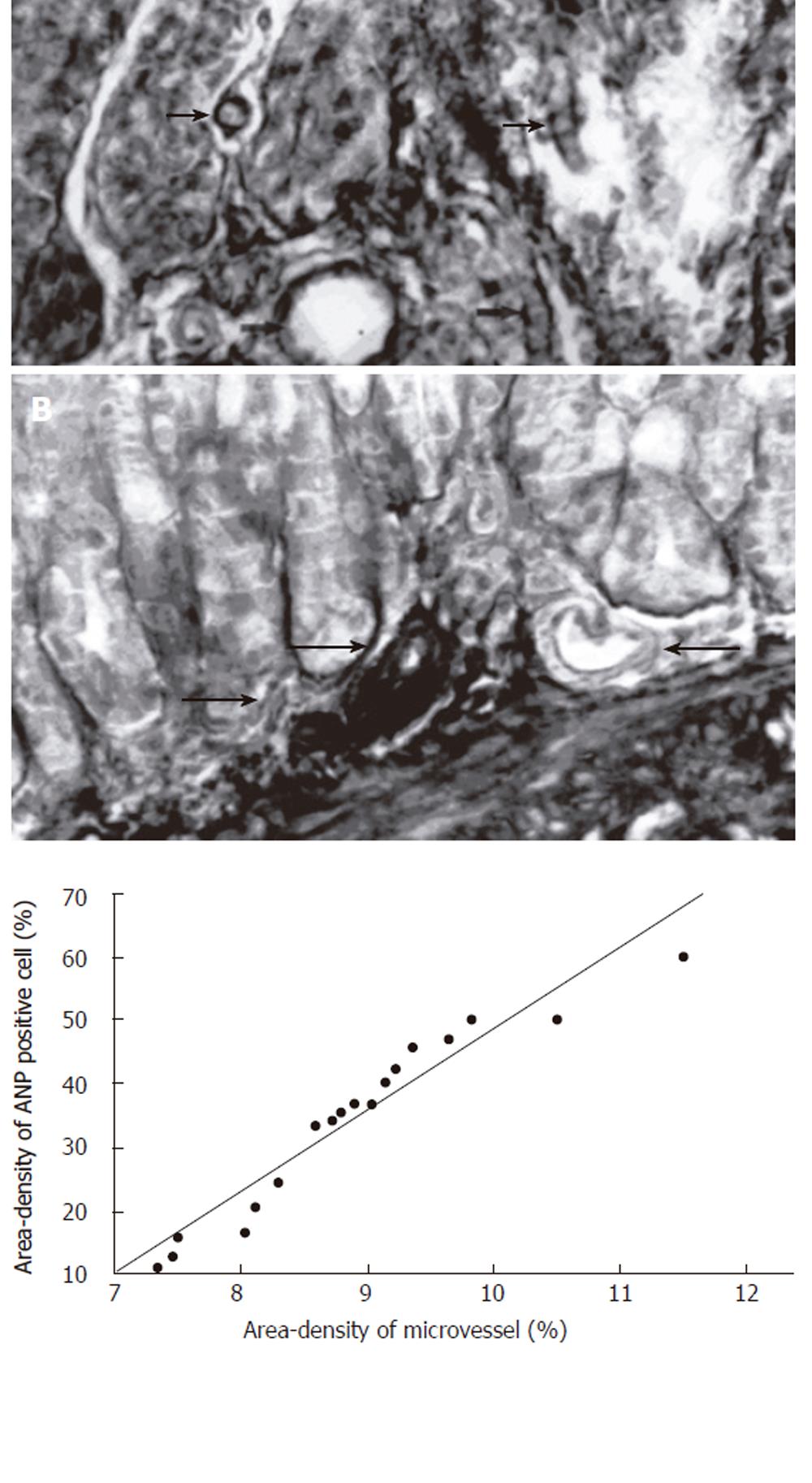 Figure 5 A: Microvessels of gastric mucous were in wriggled way and cut into different cross-sections, it could be clearly observed in distinct three-dimensions (arrow) (TA-Fe × 400); B: Some branch arteries from the large vessels run into the basal glands of the gastric mucosa (arrow) (TA-Fe × 400); C: There is positive significant relationship between the positive rate (%) of ANP-synthesizing cells and microvessel density (%) in cardiac region mucosa of rats (r = 0. 53, P < 0.05, n = 18).
DISCUSSION

In the present study, the ANP-expressing myoendocrine cells are most concentrated in the right atrium, to a lesser extent in the left atrium, and almost absent in the left ventricle[15,16].We have demonstrated that morphological distribution and ultrastructural localization of ANP-synthesizing cells in rat stomach. ANP may have tissue-specific functions within the stomach. Gower et al[17-19] and Vuolteenaho et al[20-24]earlier found that the rat antrum contains ANP-synthesizing cells coupled with our present results that similar immunostaining patterns are produced when antibodies are directed to antral mucosal cells, however we have also found positive cells in cardiac and fundus. EC cells are an abundant type of enteroendocrine cells that contain serotonin and occur throughout the gastrointestinal tract[25-28]. On the basis of differences in the ultrastructural appearance of the secretary granules, it has been suggested that EC cells are comprised of several subpopulations and store different peptides. Three types of EC cells for EC1, EC2, and ECn have been identified. EC cells have two types of open-type enterochromaffin cell and close-type enterochromaffin cell. Open-type enterochromaffin cells have a large basolateral compartment in contact with the basal lamina and a narrow apical process that allows access to the lumen. Results from our present immunohistochemical studies demonstrate that at least some of the ANP-synthesizing cells in the gastric mucosa are exposed to both basal lamina and lumen, and under immunoelectron microscopy they were identified as EC cells that synthesized ANP.

Guo HS et al[29] using a radioautograph technique, detected the distribution of NPR (NPR-A) in different regions of rat stomach. NPR-A existed in both the mucosal layer and muscle layer, and the distribution order of NPR-A in density being antrum > body > fundus in muscle layer. Rambotti et al[30] found that NPR-A extensively distributed in many tissues, for example, the bladder of the toad, bullfrog brain, in fetal ovine pulmonary vascular and in the porcine coronary. The present study confirmed that NPR-A also existed in the stomach of rat and the density was largest in gastric antrum in rats, demonstrating the presence of NPR-A transcripts in the extracts of gastric fundus and natriuretic peptide-induced cGMP production localized to the parietal, mucus secreting cells in the fundus, and pyloric glands, as well as gastric smooth muscle cells[29]. Because ANP is known to stimulate gastric acid secretion and relaxes gastric smooth muscle, the effect of atrial natriuretic factor (ANF) on exocrine pancreatic secretion and the possible receptors and pathways involved were studied in vivo[29,31]. These findings suggest that these effects of ANP may be direct. Rambotti et al[31] demonstrated the presence of ANP-induced guanylate cyclase activity on both apical and basolateral surfaces of mucosal cells within the pyloric glands of rat stomach, ANP released locally into the gastric lumen could target luminally directed receptors, suggesting that ANP may help control a “negative feedback” system within the stomach of increasing acid secretion and simultaneously enchance mucus production to protect the lining of the stomach from the effects of acid. This would provide for a regulatory mechanism to ensure that the acid produced after a meal does not injure the mucosal surcosal surface of the stomach. Previous studies also indicated that vagus nerve regulated many functions of NP, for example, ANP promoted gastric acid secretion[32], ANP and endothelin-1 (ET-1) might prevent renal dysfunction during the progression of congestive heart failure(CHF) through the cGMP pathway in dogs[33,34], ANP can reduce the pre-load and after-load in normal and failing hearts[35-37]. ANP each inhibited the growth of the human pancreatic adenocarcinomas in vivo and three of the four peptide hormonesed the volume of the tumors (up to 49%)[10,38,39]. The intestinal tract is a target organ for ANP, characterized by various biologic activities, immunoreactivity, as well as specific binding sites for ANP[40,41].