AIM: To evaluate the myoelectric manifestations of peripheral fatigability in patients with primary biliary cirrhosis in comparison to healthy subjects.

CONCLUSION: No instrumental evidence of peripheral fatigability can be found in women with primary biliary cirrhosis but no comorbidity, suggesting that fatigue in such patients may be of central origin.

The comprehension of this symptom has been hampered by the complexity of its nature and relationships with somatic illnesses, psychological disturbances, and stress reactions. Moreover, fatigue is subjective and difficult to measure[5]. The most used instruments for measuring fatigue in PBC are self-reported questionnaires such as the fatigue impact scale (FIS)[3,6-10].

Several studies support the hypothesis that fatigue has a central origin[10-13]. In contrast, Goldblatt and colleagues[7] assessed muscle fatigability in PBC patients with a grip strength protocol, and found that patients with high FIS scores are characterized by an accelerated decrease in muscle function compared with both healthy controls and non-fatigued patients.

However grip strength cannot distinguish if muscle fatigability is due to a central or a peripheral dysfunction, and it is not able to detect volitional components. Moreover, Stanca et al[14] have not found any difference in grip strength between patients with high FIS scores and controls. No study has completely excluded a peripheral component of fatigue in PBC patients.

A validated surface electromyographic technique which provides objective measures of peripheral fatigability has been developed[15-17]. This method is able to monitor central drive and has been applied in both physiological and pathological conditions, but never in chronic liver diseases[18-20].

The aim of this study was to investigate if myoelectric manifestations of peripheral fatigability during voluntary isometric contractions in women with PBC, but no comorbidity, are significantly different from those in healthy subjects matched for their age, sex and body mass index (BMI).

A subgroup of 16 women without nonhepatic causes of fatigue underwent EMG assessment of peripheral fatigability. The other patients did not participate in the study because of nonhepatic causes of fatigue or because they denied their consent. All patients were stable with no history of bleeding, ascites or encephalopathy. Laboratory investigations included blood cell count, liver function tests, detection of creatinine, thyroid hormones, HbA1c, iron, serum electrolytes, and anti-mitochondrial antibodies. All patients were treated with ursodeoxycholic acid (UDCA) at the time of the study.

Thirteen healthy women comparable for age and BMI who declared that they did not assume drugs or suffer from any disease served as controls.

The study protocol conformed to the ethical guidelines of the 1996 Helsinki Declaration and all subjects gave their informed written consent to participating in the experimental study.

Rand MOS depression screening is composed of 8 items to screen the depressive disorders (major depression and dysthymia) and has been used in general and chronic disease populations, and in PBC patients[23]. It does not consider physical depressive symptoms that can be found also in abdominal diseases.

EMG analysis of isometric contractions of the dominant anterior tibial muscle was conducted in this study. This muscle was chosen because of its simple anatomy and because it has been analyzed by other investigators for fatigue studies[15].

Subjects laying on a bed were asked to put on a specially designed boot. The ankle joint was fixed with Velcro straps. A force transducer (Digitalanzeiger mod. 9180) was displayed to measure the force produced by the dorsal extension of the feet, and a display located at bed side showed the instantaneous force values expressed in Newton.

Fatigue test for anterior tibial muscle isometric contraction was performed for 20 s at 80% of MVC. This target force was reached and held by means of the visual feedback display located at bed side showing the instantaneous force values. Standardised verbal encouragement was given throughout this force-failure point. Fatigue test was performed two times with 5 min rest between the two sessions.

The skin was cleaned and two pregelled disposable surface electrodes (Bionen Firenze) were placed 20 mm apart on the longitudinal midline of the dominant anterior tibial muscle between the motor point and the tendon. A ground electrode was attached to the knee. EMG signals were recorded during each session of the fatigue test.

Neurophysiologists were blinded to FIS scores of the subjects.

Twenty series of 500 ms windows were taken from the 20 s data of the EMG signal of the fatigue test. For each window, root mean square (RMS) amplitude of the EMG signal and spectral analysis (512 points, Hanning window processing, fast Fourier transform) were applied. The mean MNF and median MDF values of EMG signal frequency spectrum were computed. EMG parameters were normalized to the values generated at the beginning of each session. Then, linear regression was applied to the time-series of RMS, MNF and MDF to estimate their rate of change (slope of their respective linear regression).

MNF and MDF slopes are an estimate of muscle fatigability[15]. MNF and MDF tended to decrease during the trial in normal subjects, thus the slope values of their respective linear regression were negative. Subjects with a higher fatigability have greater absolute values of MNF and MDF slopes. RMS is an expression of the central drive and its value tended to increase during the trial, thus the slope value of its linear regression was positive. The analysis of peripheral fatigability was possible only when RMS slope was positive. The finding of a low central drive could be used as an index of the central pathology or it could be due to a volitional component.

The Mann-Whitney U test (non-parametric test for independent samples) was used to identify whether significant differences in MVC existed between subject groups. Statistical comparison was made between controls and patients, between controls and subgroups of fatigued and non-fatigued patients.

EMG parameters were analyzed during each recording session by repeated measurements (ANOVA). The univariate solution was obtained after correction for the Greenhouse-Geisser factor when appropriate, to protect against type I errors associated with nonsphericity of data. In each case, the approximate F value associated with the univariate test was reported. Variables showing significant effects or interactions (P < 0.05) were subjected to post hoc testing (Scheffé) using an alpha level of less than 0.05. Sample regression of EMG parameters was used to evaluate the inter-observation variation between the first and second session.

All statistical analyses were performed using StatView for Windows.

RMS did not increase during the trial in two patients (Figure 1), so EMG analysis of peripheral fatigability was performed on the remaining 14 patients. These two patients reached the fatigue threshold. Fatigue testing was performed twice in each patient, consequently 28 slope values of each parameter for patients and 26 for controls were obtained.

Figure 1 Normalized values of EMG variables during voluntary isometric contractions at 80% MVC from a patient with low central drive. In this case the trial was not included in the analysis of peripheral fatigue. 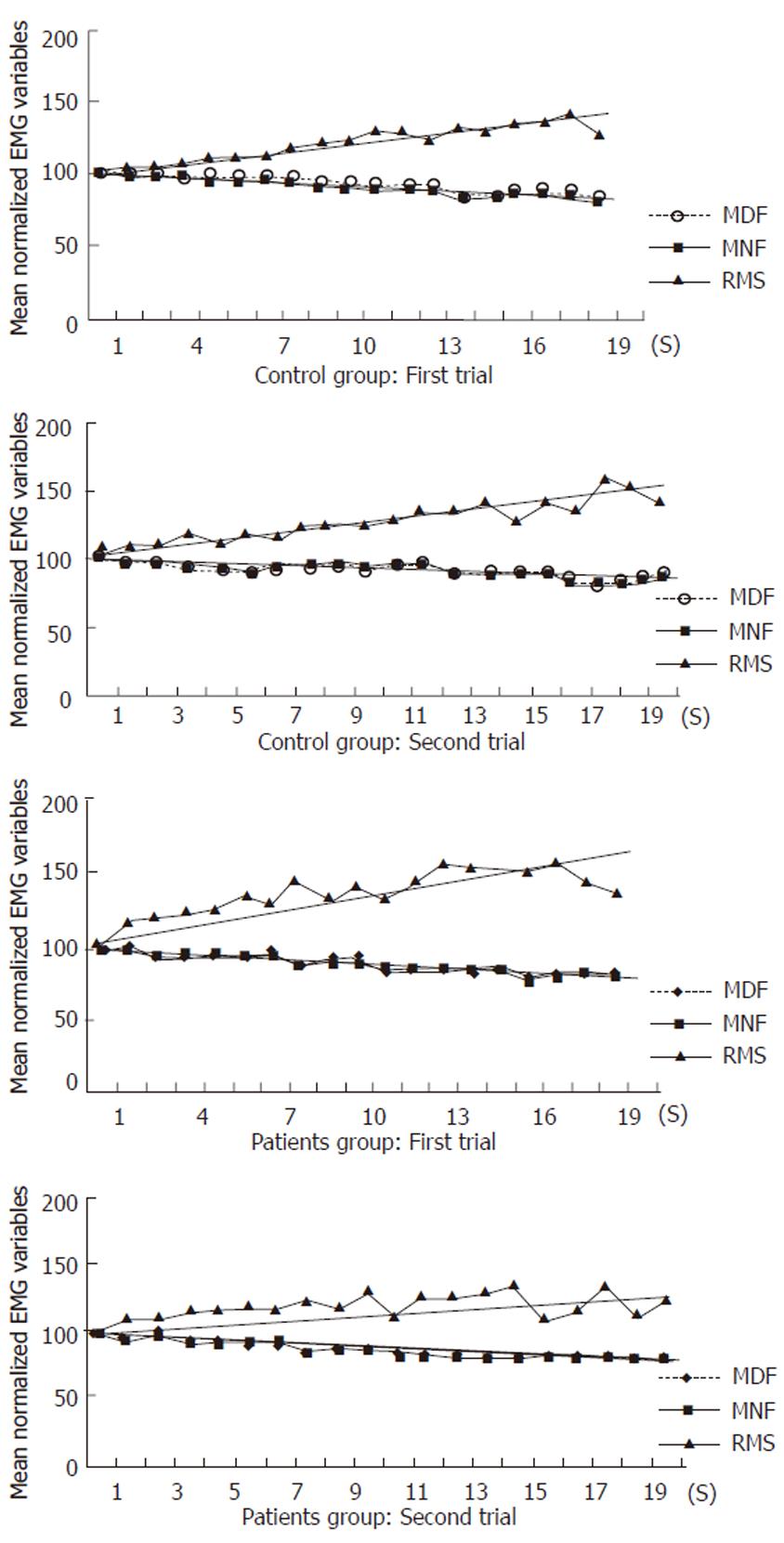 Figure 2 Mean normalized values of EMG variables during voluntary isometric contractions at 80% MVC from patients and controls. The time course of MNF, MDF, RMS and force were combined to produce a “fatigue plot”. Plots were obtained by normalizing each variable with respect to the initial value of its own regression line.
DISCUSSION

Fatigue is an overwhelming sense of tiredness, lack of energy or feeling of exhaustion. It is frequently present even at rest. Fatigue is a multidimensional symptom caused by the interaction of physical, psychosocial and cognitive factors. It cannot be confused with weakness or fatigability. The last one in particular is a generalised sense of exhaustion, not present at rest, affecting the patient after a few minutes of physical activity and disappears after a short rest[24].

Fatigue muscle arises only when muscle fibres are sufficiently activated and consequently develop an effective contraction. Stimulation can be obtained artificially with electrodes or through the physiologic voluntary nervous pathways. The first method gives a more constant elicitation, however it is not physiologic and it is quite an irritation for patients. The second one employs the will of the subjects in keeping the contraction of the analyzed muscle. In our study, isometric contraction of the dominant anterior tibial muscle was voluntary.

When a subject develops fatigue and is not able to keep a target force, it can be due to an inadequate force generation by muscle fibres or by a lack of central drive (peripheral and central fatigue)[25]. If muscle fibres are not sufficiently stimulated because of a lack of central drive, they do not contract enough to develop fatigue, thus in this condition peripheral fatigue cannot be evaluated.

Central drive is not sufficient for two main reasons: the subject is not motivated and does not make enough effort to execute an adequate muscle contraction and the subject is affected by a pathologic neurological central condition that does not allow activation of the muscle. Hence peripheral fatigue can be analyzed only in the presence of an adequate central drive, and central drive can be low for a lack of motivation or for a neurological pathology.

To the best of our knowledge, this is the first study in patients affected by PBC in which it has been used as an EMG technique able to quantify fatigability and analyse the presence of peripheral dysfunction.

In our population MVC values were similar in patients and controls. These findings agree with those of Goldblatt et al[7] and we can suppose that PBC patients are not weaker than the general population. In addition, fatigue testing showed that fatigability in women affected by PBC without comorbidity was not significantly different from that in healthy controls matched for age, sex and BMI. Moreover, we did not find any significant difference in peripheral fatigability between fatigued and non-fatigued patients as assessed by FIS.

Two patients had a defective central drive as shown by a flat RMS slope and both of them had high FIS scores and were not able to maintain the 80% MVC target (Figure 1). We do not know if this lack of central activation was due to a volitional component or to a central dysfunction. In fact, our EMG technique was not able to analyze central dysfunction. These two patients had a normal MVC and standard EMG did not show any pathological neuromuscular abnormality. Interestingly, both women were positive for Rand MOS Depression Screening. So, according to the previous studies showing a positive correlation between depression and fatigue, we may suppose a lack of motivation in these two patients[2,3,6]. If they would have been analysed only with force recording, as done in previous studies, they would be classified as subjects with high muscle fatigability[7].

In conclusion, no evidence of peripheral fatigability in PBC patients without comorbidity is demonstrable. If these data will be confirmed, fatigue pathogenesis in PBC patients may be related to a central mechanism. This central alteration may be due to a common genesis with the liver disease, or in alternative to one or more causes not related to the hepatic damage (specific or not specific symptom of PBC). Some data support the last hypothesis, in fact two recent reports have failed to demonstrate a significant difference in FIS scores between patients and controls and no correlation has never been found between fatigue and parameters of disease severity and activity[2,4,6,9,14]. Future research should be addressed on the investigation of central fatigue and the role of depression, which is the only parameter significantly associated with fatigue in several studies[2,3,6].

The authors thank Professor Calogero Surrenti for his helpful comments and suggestions during preparation of the manuscript, and Cristiana Martinelli for her kind technical assistance.