Cholangiocarcinoma (CCA) which arises from bile duct epithelium is a common hepatobiliary malignancy found in Northeastern Thais. Liver fluke (Opisthorchis viverrini) infection related to cholangiocarcinogenesis is strongly supported by evidence from both experimental and epidemiological studies[1,2]. In addition, exogenous and/or endogenous N-nitroso compounds have also been claimed to be responsible[1,2]. These studies suggest that liver fluke infection causes chronic inflammatory reactions and enhance the susceptibility of bile duct epithelium to carcinogenic chemicals such as N-nitroso compounds leading to genetic and epigenetic damages in the cells. CCA accounts for about 89% of all liver cancer cases in Khon Kaen with the highest incidence in the world (97.4/105 in males and 39.0/105 in females)[3]. Khon Kaen is one of the largest provinces in Northeast Thailand where the liver fluke is highly endemic. Most patients are diagnosed at late stage and difficult to cure successfully because of advanced metastasis at the time of diagnosis. The 3-year survival rates are 33%, 30% and 12% for stage III, stage IVa, and stage IVb, respectively, whereas 5-year survival rates are 0% for all three late stages[4]. CCA, like other common epithelial cancers is believed to develop through a multistep process. However, the molecular mechanism of carcinogenesis of CCA remain unclear. A series of different genes and chromosomal regions may be deleted or amplified in the tumor genome. Several genes are reported to be involved in CCA, e.g. p53 and MDM2[5], p16[6], K-ras[6], hMLH1 and hMSH2[7,8], and COX-2[9,10]. At the chromosomal levels, changes of several chromosomal arms have been reported, e.g. 13q[11], 6q, 9p and 17p[12], 17q, 5p, 6q, and 18q[13].

There are reports of genetic changes on the chro-mosomal region 22q in other epithelial cancers such as colorectal cancer[14,15], oral cancer[16], breast cancer[17], gastric carcinoma[18] and ovarian carcinoma[19] , except CCA. Alteration in gene copy number by amplification or deletion is a common mechanism that leads to deregulation of gene expression and finally to neoplastic transformation. Investigation of the prognostic or predictive significances of these genetic alterations requires a reliable and sensitive method for the measurement of gene copy number in clinical tumor samples. Quantitative real time PCR is increasingly used to quantify copy numbers of nucleic acids in clinical applications[20]. The measurement of gene copy number by qPCR has frequently been reported for human tumors including stomach cancer[21], neuroblastoma[22], and oligodendroglioma[23]. Our comparative genomic hybridization data in CCA showed copy number alteration at 22q13 at 21%. Taken together, this study aimed to investigate the allelic imbalance of the chromosomal region 22q12-qter by means of SYBR Green I-based qPCR assay and define its candidate genes which may be involved in carcinogenesis and pathogenesis of liver fluke related CCA. We also correlated our findings with clinical parameters including patient survival.

Sixty-five samples were obtained from liver fluke related CCA patients undergoing surgery at Srinagarind Hospital, Khon Kaen University, Khon Kaen, Thailand. The patients’ data and survival time are shown in Table 1. Informed consent was obtained from each patient prior to sampling under the guideline approved by the Ethical Committee of Khon Kaen University. Tumor tissues containing 70% or more tumor cells were prepared for DNA extraction following standard method. Peripheral blood samples collected from 50 healthy blood donors were used to extract DNA which was then pooled to yield 5 pooled DNA samples (10 cases each) for normal DNA copy number determination. DNA extracted from normal placenta was used for setting a standard curve.

Six target genes and 3 reference microsatellite markers spanning from centromere to telomere of the chromosomal region 22q12-qter were selected for DNA copy number quantification. The genes were NF2 (Neurofibromin 2), TIMP3 (Tissue Inhibitor of Metalloproteinase 3), D22S283, D22S423, ST13 (Suppression of Tumorigenicity 13), TOB2 (Transducer of ERBB2, 2), BIK (BCL2-interacting Killer), D22S274, and TP (Thymidine Phosphorylase). The sequence and location of each locus are shown in Table 2.

Allelic imbalance on the chromosomal region 22q12-qter was analyzed by SYBR Green I based qPCR using Rotor-Gene 2000 Real Time Amplification System (Corbett Research, Australia). Since SYBR Green I dye is a nonspecific dsDNA intercalating dye, we made the reaction specific by analyzing the annealing and signal acquisition temperatures for each primer. A relative standard curve was constructed for each locus using a 2-fold serial dilution of human placental DNA to get 4 different concentrations. Placental DNA with known concentration was used as a control to validate experimental precision. A relative DNA copy number was calculated for each sample as a ratio of DNA copy number for target locus and the average DNA copy number for 2 reference loci GAPDH and β-actin housekeeping genes. Relative DNA copy numbers of 9 tested loci in 5 pooled normal leukocyte DNA (n = 45) were calculated for normal reference range. The relative DNA copy number in the sample was interpreted as loss or gain when the ratio was less than mean - 2SD or more than mean + 2SD of normal reference range, respectively.

Quantitative PCR was conducted in triplicate in a 20 μL reaction volume containing 67 mmol/L Tris Base, 16.6 mmol/L ammonium sulfate in a 10 mL/L Tween 20, 3 mmol/L MgCl2, 5 pmol each primer, 100 μmol/L each deoxynucleoside triphosphate (dNTP), 1X SYBR Green I and 1 unit Taq polymerase with different concentration of genomic DNA. Each locus was amplified using optimal conditions. The thermal cycling conditions comprised 94°C for 300 s, and 40 cycles of 94°C for 15 s, 46°C -58°C for 20 s and 72°C for 15 s and hold at 72°C for 600  s. To assure the reproducibility and accuracy of qPCR, experiments were repeated when a coefficient of variation for triplicate samples was higher than 10% or a PCR efficiency lower than 0.85 was observed. 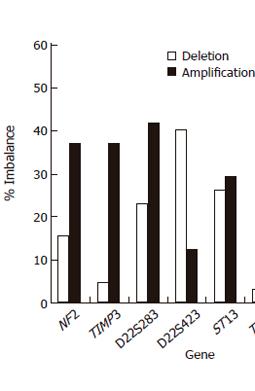 Figure 1 Percentages of deletion and amplification in each locus. 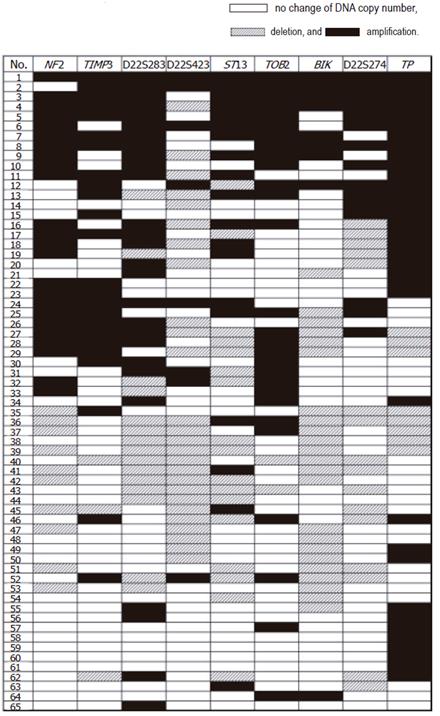 Figure 2 Fine mapping of chromosomal region 22q12-qter in CCA from centromeric (NF2) to telomeric (TP) ends. The regions of common amplification are TP, TOB2, and between NF2 and D22S283. The common deleted regions are D22S423 and BIK.
Correlation of clinicopathological features and allelic imbalance on chromosome 22q12-qter

Gene deletion and amplification are common events in tumorigenesis and progression. In this study, we examined the allelic imbalance of chromosomal region 22q12-qter by SYBR Green I-based qPCR assay and determined its association with clinicopathological parameters and survival in 65 CCA patients. TP showed the highest frequency of genomic DNA amplification (53.8%) (Figure 1), suggesting its important role in the development of CCA. TP gene located at 22q13.33 is an angiogenic factor, which promotes angiogenesis in vivo and stimulates the in vitro growth of a variety of endothelial cells. TP also has an enzymatic activity involved in pyrimidine metabolism. It catalyzes the phosphorolysis of thymidine to thymine and deoxyribose-1-phosphate and has a pro-angiogenic effect for which deoxyribose-1-phosphate may be responsible[24-26]. Since gene amplification is reported to play an important role in the initiation and progression of tumors[27], TP amplification and overexpression have been reported in many solid tumors with invasion and metastasis including CCA[28-30]. These observations indicate that the incidence of amplification and overexpression of TP is high in cancer and associated with carcinogenesis. Although we could not find any correlation between clinicopathological parameters and TP imbalance or impact of TP gene copy number on patient survival when treated with 5-fluorouracil (5-FU)-based chemotherapy (data not shown), its high amplification may be worth further investigation into its involvement in chemotherapeutic activity because normal TP protein activity is required for the activation of the cytotoxic activities of anti-tumor drug 5-FU. 5-FU-based chemotherapy is given to patients with advanced cancer and as an adjuvant treatment. 5-FU is a fluorinated pyrimidine that is metabolized intracellularly to its active form, fluorodeoxyuridine monophosphate (FdUMP), by TP to inhibit DNA synthesis. Our further studies will investigate whether TP expression also associates with chemosensitivity in CCA.

Microsatellite marker D22S423 was the most frequent locus loss (40%) among 9 loci, suggesting that this region may harbor a putative tumor suppressor gene (TSG), which plays a role in the development of CCA. LOH frequency at D22S423 was reported in 26.8% of informative cases in sporadic colorectal cancer[15]. Putative TSG located 1 cM distal to D22S423 are ST13 and EP300, however, the presence of unknown TSG located within this region cannot be excluded. ST13 encodes an adaptor protein that mediates the association of the heat shock proteins HSP70 and HSP90. The expression of ST13 is reported to be downregulated in colorectal carcinoma tissue compared with that in adjacent normal tissue, suggesting that ST13 is a candidate TSG[31]. Function and role of ST13 in tumor development is still unclarified. Further investigation into ST13 expression and its roles in carcinogenesis of CCA is needed.

D22S283 was deleted in 15 cases, which all had lym-phatic invasion, suggesting the deletion of unknown TSG, which functions on inhibiting invasion. D22S283 showed amplification in 27 out of 65 cases, indicating the existence of putative oncogene (s) at this location, for example, RAB member of RAS oncogene family, RNA binding motif protein 9, and eukaryotic translation initiation factor 3. On the other hand, some TSG at this location may amplify, leading to high expression which may result in good prognosis of patients with D22S283 amplification (Figure 3). Other putative TSG around D22S283 that play a role in apoptosis are caspase recruitment domain family, member 10 and phospholipase A2, group VI.

All 23 cases of BIK gene deletion were associated with lymphatic invasion. Many reports suggest that BCL2-interacting killer (apoptosis-inducing) functions as a proapoptotic protein, which enhances programmed cell death. Germain et al[32] identified BIK as an initiator of cytochrome C released from mitochondria operating from a location at the endoplasmic reticulum and activated caspases. Thus, role of BIK in pathogenesis and carcinogenesis of CCA needs further investigation. NF2 gene located at 22q12.2 produces the Merlin protein. It is thought to act as a tumor suppressor protein, however, the mechanism remains obscure. Xiao et al[33] have shown that merlin inhibits tumor cell proliferation and arrests cells at G1 phase, concomitant with decreased expression of cyclin D1, inhibition of CDK4 activity, and dephosphorylation of pRB. They suggested a unifying mechanism by which merlin inactivation might contribute to the overgrowth seen in both noninvasive and malignant tumors. DNA amplification of NF2 was found in 36.9 % of our CCA cases, hence, expression of NF2 may lead to significant reduction of proliferation and G0/G1 arrest in CCA cells.

The development of tumor is a multistep process that requires accumulated mutations or alterations of both oncogenes and tumor suppressor genes. It is generally believed that mutations in 5 to 10 genes are required for the development of a tumor. Thus, TP, BIK, NF2, and candidate genes on D22S423 and D22S283 are likely to play significant roles in carcinogenesis of liver fluke related CCA by this study. In addition, to our knowledge, we first propose that the D22S283 amplification acts as an independent indicator of favorable prognosis in liver fluke related CCA.