AIM: To determine whether the number of non-rejoining G2-chromatid breaks can predict the radiosensitivity of human cell lines.

CONCLUSION: The number of non-rejoining G2 PCC breaks holds considerable promise for predicting the radiosensitivity of normal and tumor cells when two or more than two doses lever is tested.

An important goal of current research in radiation oncology is the development of an assay or a combination of assays to predict the radiation response of individual human tumors and normal tissues. Accurate prediction of response to conventional therapy could lead to treatment modification when necessary. The important radiobiological factor that has a significant effect on a tumor’s response to radiotherapy is intrinsic radiosensitivity, which, determined with a colony assay, is significantly associated with treatment outcome after radiotherapy[1,2]. However, it is unlikely to use colony formation as a routine predictive assay, as it takes several weeks to complete. This is usually too long for patients to wait for appropriate treatment. Other assays should therefore be developed which can be used routinely in a clinical setting. Such assays should give a direct or indirect measure of cell killing, and chromosomal radiosensitivity is one of the potential endpoints for assessing cellular intrinsic radiosensitivity.

Researchers have studied the metaphase chromosome aberrations using conventional techniques, and found a close relationship between radiation-induced chromosome aberrations and cell kill[3,4]. However, it is difficult to obtain enough metaphase for cytogenetic analysis because of the cell cycle delay or interphase cell death after irradiation. These problems might be solved by studying the interphase cell aberration directly. Thus, PCC technique using phosphatase inhibitors is optimal. Because the method involves non complex procedures and generates results in the non-cycling state, it is an advantage for measuring chromatin damage by qualitatively different types of radiation because one can observe chromatin damage in the situation in which the effects on an LET-dependent cell-cycle delay and interphase cell death are removed, and PCC technique is very useful for measuring the radiation-induced chromatid breaks in all of the cell cycles, especially in G2 phase[5-8].

It has been shown a linear dose response in the same dose range used for cell-survival experiments in different in vitro cell systems using PCC assay to measure chromosomal damage[9-12]; and the repair kinetics of radiation-induced chromatid breaks has been studied[9,13,14]. Furthermore it was demonstrated that there is a good correlation between the induction of non-rejoining PCC breaks in interphase cells and cellular radiosensitivity[15-17]. However, it is well established that the radio-sensitivity is dependent of cell cycle progression, and among each stage of interphase, G2 phase is the most radiosensitive, G1 phase the second radiosensitive, and S phase the least radiosensitive; while G0 phase is radio-resistant for lack of oxygen and enough repairing time[18-20]. Previous studies led to the conclusion that G2 phase is a very important stage. However, there were only a few reports on the chromosome aberrations in G2 phase and little is known of the relationship between G2 chromosomal aberration and cellular clonogenic radiosensitivity.

The purpose of this study was to explore the chromosome aberrations in G2 phase. The non-rejoining G2-PCC breaks after 24 h of post-irradiation incubation by γ-rays of two human tumor cell lines were measured using PCC technique. In order to evaluate the potential of the PCC assay as a predictor of cellular radiosensitivity, the correlation between radiation-induced non-rejoining G2-PCC breaks and the cellular clonogenic radiosensitivity was studied. Furthermore, the results were analyzed together with the author’s previous results of human normal liver cells L02[21].

After irradiation, cells were plated at a density of about 100 surviving cells per 6 cm culture dish and incubated for about 14 d, and then fixed and stained with a solution of Giemsa.

Calyculin A, a specific inhibitor of protein phosphatase types 1 and 2A, which can induce PCC in various types of cells with high efficiency[5,22], was purchased from Wako Chemicals (Osaka, Japan), dissolved in 100% ethanol as a 1 mmol/L stock solution and stored at -20 °C. After irradiation, cells were incubated at 37 °C in a 50 mL/L CO2 atmosphere. Twenty-four hours later calyculin A was added (to give a final concentration of 50 nmol/L) to the cell cultures and cells were further incubated for 30 min. Chromosome spreads were then harvested by cell swelling in 75 mmol/L KCl for 20 min at 37 °C and fixed with Carnoy’s fixation. A final wash and fixation in the same fixative was completed before dropping cells onto a glass slide and hot humidity drying.

Colonies of more than 50 cells were counted as survivors. The number of colonies per dish was counted and the surviving fractions were calculated as the ratio of plating efficiencies for irradiated and non-irradiated cells. Plating efficiency was defined as the colony number divided by the number of cells plated. The survival data were fitted to the linear-quadratic model: LnS = -αD-βD2, where S is the survival fraction and D is the radiation dose.

Chromosome was stained with 50 g/L Giemsa for 20 min. Fifty well-spread G2 phase cells were scored under oil immersion with a light microscope for each dose point according to the standard criteria[23]. Briefly, chromatid discontinuing, misalignment of the distal to the lesion, or a non-stained region longer than the chromatid width were classified as a break. Iso-chromatid breaks were scored two breaks. The total chromatid breaks were calculated by summing the production of chromatid-type breaks and iso-chromatid breaks. The mean aberration values for the three separate experiments were obtained. These mean values and the standard error of the means were plotted and fitted by linear regression, and the slopes of the dose-response curves were calculated.

Cell survival parameter from the linear quadratic model fitted to the survival data is shown in Table 1. SF2 was measured from the raw data also shown in Table 1. For radiosensitivity, three cell lines displayed the different potency, in the order of, HepG2 > HO8910 > L02.

All cell lines showed a dose-related increase in the induction of non-rejoining G2-chromatid breaks (Figure 1). The dose-response curves were fitted by linear regression and the slopes of the dose-response curves were evaluated. The slope of HepG2 was the steepest, and that of HO8910 the second and L02 the least. Namely, the order of the slopes was HepG2 > HO8910 > L02. The values for the slopes of the curves are given in Table 1. 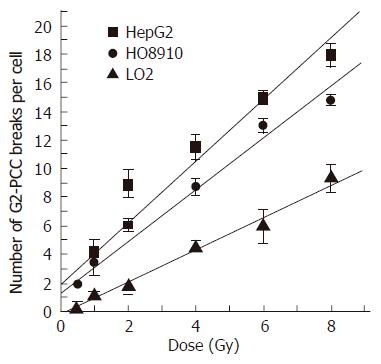 Consistent with previous studies[21], fitted cell survival curve of three cell lines were linear quadratic in the present study. Among the three cell lines, survival fraction of L02 cells was the highest after absorbing same dose of radiation. These suggested that human normal liver cells were of much lower sensitivity to γ-rays than both human ovary carcinoma cells and human hepatoma cells. These may be because reductive glycogens synthesized in normal liver cells which interact with free radicals reduce the radiation injury[21]. In addition, the theoretic basis of radiotherapy is that the normal cells are of low radiosensitivity, and our results further confirmed this.

It has been shown that the rejoining of radiation-induced DNA double strand breaks (dsbs) was saturated within 2-4 h in mammalian cell lines[24,25] and that the number of residual dsbs did not change between 4 and 20 h using the neutral filter elution[26]. So it is considered that the most important parameter related to clonogenic radiosensitivity is the residual dsbs for 4 h or more after irradiation[27]. The PCC technique measures the chromatid breaks caused by the dsbs[28,29], and the processes of chromosomal breaks rejoining contain a fast component and a slow component[5]. The G2-PCC breaks were rejoined with a half-time of 5 min for the fast component and about 3 h for the slow component after irradiation[5], implying that the rejoining of chromosome breaks occurred mainly during the early hours after irradiation. Furthermore, Borgmann[29] reported that the number of PCC fragments induced by radiation plateaued at 4-6 h after irradiation, and did not change for about 10 h. In addition, Suzuki[13] reported that the repairing process of radiation-induced chromosome aberration occurred during the early 10 h after irradiation. Based on previous studies, most kinds of cells end their spontaneous repair process within 24 h if they are injured, and after 24 h, injured and normal cells without any artificial factors will be stable and continue synthesizing, mitosis processes. Therefore, it is reasonable that the non-rejoined excess fragments examined after incubation for 24 h after irradiation may be the most important parameter related to clonogenic radiosensitivity. Based on these, the non-rejoining G2-PCC breaks were examined after incubation for 24 h post-irradiation in this study, and a good linear relationship was found between dose and the non-rejoining G2 chromatid breaks after the cells were exposed to 60Co γ-rays (Figure 1). In addition, we found that cells which were more sensitive to the cell killing were similarly more susceptible to induction of non-rejoining G2 chromatin breaks (Table 1 and Figure 1). Suzuki[15-17] and Borgmann[29] found similar results. Additionally, a good linear relationship was also found between dose and the initial chromatid breaks[7,21,30]. It is easy to study the radiation-induced chromatid damage with the PCC technique[11,31,32], and the data obtained thereby may accurately reflect the radiation damage for the chromatin level without the competition as a result of cell cycle and/or interphase cell death. Therefore the PCC technique is very useful for detecting chromatin damages by qualitatively different types of radiation. Furthermore, it is faster in obtaining the result by the PCC technique than by most of other techniques.

In the present study we have attempted to validate the use of radiation-induced non-rejoining G2 chromatid breaks as a measure of cellular radiosensitivity. One of the prerequisites for the potential use of such a rapid assay would be that the relationship with clonogenic survival, the Gold Standard and most relevant assay for tumor control, should be high. In this research, a good correlation (r = 0.923) was found between cell survival and the number of non-rejoining G2-chromatid breaks in the three cell lines (Figure 2A). It implies that radiosensitivity can be determined by the induction of non-rejoining G2-PCC breaks.

Dependent on the amount of primary tumor material (biopsy), it might not be feasible to obtain a complete dose-response curve consisting, for example, of four or more different doses. It is therefore more likely that only one or two doses could be studied with any statistical significance. Because of the limited number of cell lines in this study, it was not reliable to analyze the correlation between cell survival and the induction of non-rejoining G2-chromatid breaks for individual doses. For multiple doses, highly significant and good correlation were observed if two or more doses were used (Figure 2 and Table 2). Coco Martin[3] found similar correlation coefficients as reported here for 13 human tumor cell lines at two or more radiation doses using metaphase cytogenetic techniques. It indicates that two doses can be applied on fresh tumor tissue to obtain a relative high correlation. As for the individual doses, it is necessary to expand the number of cell lines to confirm the correlation between cell survival and the induction of non-rejoining G2-chromatid breaks.

In conclusion, it is suggested that the PCC technique is useful for determining chromosome aberration in G2 cells, and the amount of non-rejoining G2-PCC breaks induced by radiation can evaluate the cellular clonogenic radiosensitivity. To assess the general applicability of this approach, further studies are needed to expand the number of human cell lines.