AIM: To investigate the effect of the serum of patients with chronic hepatitis B (CHB) on apoptosis of renal tubular epithelial cells in vitro and to study the role of hepatitis B virus (HBV) and transforming growth factor-β1 (TGF-β1) in the pathogenesis of hepatitis B virus associated glomerulonephritis (HBV-GN).

METHODS: The levels of serum TGF-β1 were measured by specific enzyme linked immunosorbent assay (ELISA) and HBV DNA was tested by polymerase chain reaction (PCR) in 44 patients with CHB ,and 20 healthy persons as the control. The normal human kidney proximal tubular cell (HK-2) was cultured together with the sera of healthy persons, CHB patients with HBV-DNA negative(20 cases) and HBV-DNA positive (24 cases) for up to 72 h. Apoptosis and Fas expression of the HK-2 were detected by flow cytometer.

CONCLUSION: The serum of patients with chronic hepatitis B promotes apoptotic damage in human renal tubular cells by triggering a pathway of Fas up-regulation. HBV and TGF-β1 may play important roles in the mechanism of hepatitis B virus associated glomerulonephritis.

Hepatitis B (HBV) viruses are well-recognized causes for chronic hepatitis, cirrhosis, and even for hepatocellular carcinoma. Apart from liver disease, these viral infections are known to be associated with a spectrum of extrahepatic manifestations [1]. Hepatitis B is prevalent in China and hepatitis B virus associated glomerulonephritis has been one of the common renal damages secondary to HBV infection in Chinese children [2]. The cause of HBV-GN is generally believed to be immune mediated [3]. Recent studies showing expression of HBV viral antigens in kidney tissue and HBV DNA distributed generally in the nucleus and cytoplasm of epithelial cells of renal tubules suggest direct viral-induced pathological alterations and chronic immunologic injury [4,5]. Apoptosis is an active mode of cell death that promotes cell loss during both acute and chronic renal damage [6,7,8]. Here we investigated cell apoptosis in human renal tubular epithelial cells induced by sera of patients with chronic HBV infection and explored its mechanism.

Forty-four patients with chronic HBV infection (mild degree) came from Department of Infectious Diseases of the Affiliated Hospital of Luzhou Medical College, China during 2003-2004. All the patients conformed to the revised standard of the Sixth National Meeting of Infectious Disease and Parasitosis in 2000. There were 38 men and 6 women. The median age was 34 years (range: 17-62 years). According to the HBV DNA levels in serum assayed by polymerase chain reaction (Positive criteria: >1×106 copies/L), the patients were divided into HBV DNA positive patients group (24 cases) and HBV DNA negative patients group (20 cases). Twenty healthy persons whose serum markers of HBV were negative were used as the control. The blood collected from these persons was centrifuged at 4°C and the serum samples were stored at -80 °C until examination. The serum samples were in the water bath at 56 °C for 30 min to inactivate complement. The level of HBV DNA in the serum samples was estimated by polymerase chain reaction (Shanghai Fortune Medical Science Co. Ltd, China) and TGF-β1 protein concentration was determined by specific-ELISA (Jingmei Biotech Co. Ltd, China).

HK-2 was cultured in the presence of the serum (50 µL) of healthy persons, CHB patients with HBV-DNA negative and HBV-DNA positive for up to 72 h, respectively. The survival rate and apoptotic rate of HK-2 cells were determined by Annexin V and propidium iodide (PI)(Bio Vision, USA) staining. HK-2 cells were digested by 0.25% trypsin. Cells (5×105) were suspended in Binding Buffer. Annexin V (5 µL) and PI (5 µL) were then added and incubated with cells at room temperature for 5 min in the dark until detected by flow cytometry. HK-2 cells (5×105) suspended in binding buffer were stained at room temperature with CD95-FITC (20 µL) (Bio Vision, USA) for 20 min in the dark and evaluated by flow cytometry to determine Fas expression.

The data are expressed as means ± SD. Statistical analysis of data was performed using t test or F test, with a value of P < 0.05 considered to represent a significant difference.

Detection of apoptosis by flow cytometry 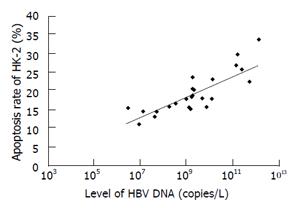 Figure 2 Relationship between apoptosis of HK-2 and levels of HBV DNA in HBV DNA positive serum.
Detection of expression of Fas by flow cytometry

Apoptosis plays an essential role in the regulation of renal cell number in both healthy and diseased kidneys [10]. Efficient deletion by apoptosis of excessively damaged, or nonfunctioning renal cells and infiltrating inflammatory cells may be beneficial. However, the loss of resident renal cells by uncontrolled apoptosis is detrimental as it may induce a reduction of functional renal mass and lead to renal insufficiency [11-13]. Several external and internal signals can induce apoptosis, which is then effected via a number of pathways. These pathways are either the Fas/FasL pathway and downstream MAPK (mitogen-activated protein kinases) and JNK (c-Jun N-terminal kinase) signal transduction, or the RANK/RANK-L (receptor activator of NFkB) pathway via activation of the caspase cascade [14,15]. Finally, irreversible branch of these pathways is the release of cytochrome c from the mitochondria, leading to nuclear fragmentation [16,17]. Previous studies indicated that pathological factors had a toxic effect on HK-2 cells by triggering an apoptotic pathway involving caspase activation, Fas up-regulation, Fas ligand (FasL) expression, the increase of Bax, the decrease of Bcl-2 protein expression and JNK signaling transduction[18,19], thus potentially interacting with mechanisms of cell loss which have been already shown to be activated in chronic renal diseases. In this study, we showed that CHB serum induced a significant increase in apoptosis in HK-2 cells detected by flow cytometry. It suggested that CHB serum might play a crucial role in the apoptosis of HK-2 cells. Excessive apoptosis of renal proximal tubular cells might be associated with renal injury in patients with chronic HBV infection.

Hepatitis B virus associated glomerulonephritis is occurring at a high prevalence in most Asian endemic areas [20]. The detailed mechanism of renal tubular epithelial cells (RTC) injury in HBV-GN remained unclear. The cause of HBV-GN is generally believed to be immune mediated [3]. Recent studies suggest hepatitis B viral direct infection in RTC may be correlated with renal pathological alterations. HBV DNA and HBV antigen were distributed generally in epithelial cells of renal tubules and the positive results from HBV DNA in situ hybridization correlated well with HBV antigen assays[4,5,20]. The analyses implied that the more extensive the existence of HBV DNA in the nephron unit, the more severe the clinical manifestation. The duration of proteinuria in cases with HBV DNA in renal tubules was much longer than in those with no HBV DNA in renal tubules [5]. Our previous study has observed that the rate of early impairment of renal cells in HBV DNA positive patients with HBV chronic infection was higher than that in HBV DNA negative patients with HBV chronic infection[21]. In this study, we demonstrated that apoptosis of HK-2 cells stimulated by HBV DNA positive serum was significantly higher than that of HBV DNA negative serum, and the apoptosis rate of HK-2 cells was correlated with serum level of HBV-DNA positively. These data suggested that the level of HBV DNA in CHB serum may have a significant effect on the apoptosis of HK-2 cells, and supported the viewpoint that hepatitis B viral direct infection in RTC could lead to cellular apoptosis and might cause renal pathological alterations.

Epithelial cell loss characterized as tubular atrophy is considered to be a hallmark in the development of chronic renal interstitial fibrosis[22]. Large amounts of research demonstrated that the proximal tubular cell may contribute to the pathogenesis of renal interstitial fibrosis[23,24]. Although the mechanism of epithelial cell loss remains uncertain, it is conceivable to assume that tubular atrophy primarily results from apoptotic cell death under pathologic conditions[25,26]. Previous studies demonstrated that TGF-β1 markedly potentiated cell apoptosis initiated by accelerating the activation of pro-caspase-9 and -3[27]. We observed that the level of TGF-β1 significantly increased in CHB serum compared with healthy person serum. Apoptosis of HK-2 cells stimulated by HBV DNA negative serum was notablely higher than that of healthy person serum. We speculate that TGF-β1 may contribute to progressive renal dysfunction after severe tubular injury.

Fas (CD95, APO-1) is a ubiquitously expressed member of the tumor necrosis factor receptor superfamily, which mediates diverse cellular responses, including proliferation, inflammation, angiogenesis, and apoptosis[28]. Fas and FasL are exclusively expressed in RTC undergoing apoptosis. Fas and FasL expression were related to the apoptosis of RTC[29,30]. The Fas-mediated cell death of a tubular cell may be true cell suicide or fratricide in which the FasL is derived from the same or neighboring tubular cell [31]. Binding of FasL to Fas leads to receptor oligomerization and recruitment of the cytoplasmic adapter protein FADD (i.e., Fas-associated death domain protein)[8]. FADD binds caspase 8, which subsequently becomes autoactivated. The catalytically active caspase 8 then initiates the caspase cascade, which leads to the rapid demise of the cell [32]. Our study showed that Fas was clearly up-regulated in HK-2 cells stimulated by CHB serum. These results indicate that apoptosis of proximal tubule kidney cells effects by triggering a pathway of Fas up-regulation. The extracellular microenvironment of injured kidneys may sensitize parenchymal renal cells to Fas induced death, leading to cell loss in the course of acute or chronic renal damage.