Gastric cancer is one of the most frequent cancers in the world; almost two-thirds of gastric cancer cases and deaths occur in less developed regions. In China, based on two national mortality surveys conducted in 1970s and 1990s, there is an obvious clustering of geographical distribution of gastric cancer in the country, with the high mortality being mostly located in rural areas, especially in Gansu, Henan, Hebei, Shanxi and Shaanxi Provinces in the middle-western part of China. Despite a slight increase from the 1970s to early 1990s, remarkable declines in gastric cancer mortality were noticed in almost the entire population during the last decade in China. These declines were largely due to the dramatic improvements in the social-economic environment, lifestyle, nutrition, education and health care system after economic reforms started two decades ago. Nevertheless, gastric cancer will remain a significant cancer burden currently and be one of the key issues in cancer prevention and control strategy in China. It was predicted that, in 2005, 0.3 million deaths and 0.4 million new cases from gastric cancer would rank the third most common cancer. The essential package of the prevention and control strategy for gastric cancer in China would focus on controlling Helicobacter pylori (H pylori) infection, improving educational levels, advocating healthy diet and anti-tobacco campaign, searching for cost-effective early detection, diagnosis and treatment programs including approaches for curable management and palliative care.

GASTRIC CANCER IN THE WORLD

In terms of geographic distribution, almost two-thirds of gastric cancer cases and deaths occur in less developed regions. High rates apply to Japan, China, Korea, Central and South America, Eastern Europe, and parts of the Middle East, and low rates to North America, Australia and New Zealand, Northern Europe, and India[1,2]. Five-year relative survivals of around 20% or less are frequently reported. The incidence ratios of men to women generally range between 1.5 and 2.5, with higher ratios for intestinal than diffuse cancers and in high-risk populations[2].

NATIONAL GASTRIC CANCER MORTALITY PATTERN IN THE 1970s AND 1990s

In China, two national mortality surveys were conducted in 1973-1975 and 1990-1992, respectively, both organized by the National Office for Cancer Prevention of Control, the Ministry of Public Health, China. These two surveys showed the detail pattern and distribution of mortality rates for cancers in China at that time[3-7]. The first mortality survey was a nation-wide study. An atlas was published based on the survey results[4], providing a visual geographic distribution of gastric cancer profile in early 1970s. A map of the gastric cancer mortality distribution for males is shown in（Figure 1）as an example. An obvious clustering of geographical distribution of gastric cancer appears in China, with the high mortality being mostly located in the north (Liaodong Peninsula, Shandong Peninsula, Yangtze River Delta and middle-western provinces along Taihang Mountain and ‘Hexi Zoulang”). 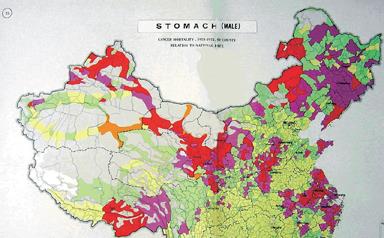 The second mortality survey covered 10% of the whole population that proved as a representative sample to reflect national cancer profile[5-7]. The crude mortality rate of gastric cancer in China was 25.2 per 100 000 (32.8 per 100 000 in men and 17.0 per 100 000 in women), which accounted for 23.2% of the total cancer deaths in 1990-1992, making gastric cancer the first leading cause of cancer death[8]. The geographic variety in the distribution was similar to that in the first survey in the 1970s. Table 1 shows the first 20 areas with high mortality rates for the gastric cancer (rates adjusted by the 1982 national census population). Most of these high-risk areas are located in rural areas, especially in Gansu, Henan, Hebei, Shanxi and Shaanxi Provinces in the middle-western part of China.

In addition to the above two national mortality surveys, there were a few publications on gastric cancer mortality trends at local levels, either in big cities such as Beijing, Shanghai, or in high-risk areas such as in Henan and Hebei Provinces[11-14]. Similarly, the mortality rates of gastric cancer remain high although there was a slight decreasing trend during different time periods among those areas. Therefore, gastric cancer is still the major common cancer and a big burden for local health resources and facilities.

Based on a routine mortality reporting system, covering 10% of the Chinese population, from the Ministry of Public Health which was submitted to the World Health Organization[15], the gastric cancer mortality trends in China were analyzed from 1987 to 1999, using the joinpoint model. The trends were further combined with the ratio of incidence to mortality from data in seven cancer registries in China that were published in the 8th edition of Cancer Incidence in Five Continents[16], to estimate and project the mortality and incidence for gastric cancer in 2000 and 2005 (by site, age, sex and area) at the national level, using the log-linear regression model with Poisson distribution assumption. These results have been serially published recently[17-19].

According to the data from the Center of Health Information Statistics (CHIS) under the Ministry of Public Health, gastric cancer mortality rates were higher in rural than urban areas, and in men than in women. During 1987-1999, slight but significant declines in mortality were noticed in almost the entire subpopulation (except in urban men before 1991) and for most age groups (except age group 15-34) in rural areas (Figures 2 and 3). In 2000, 0.3 million deaths and 0.4 million new cases were estimated for gastric cancer, similar to what was projected in 2005, while the latter had a slight decrease in men but increase in women (Table 3). In 2005, in terms of incidence rates, gastric cancer would rank the third among the most common cancers in China (after cancers of lung and liver in men and after cancers of breast and lung in women)[19]. 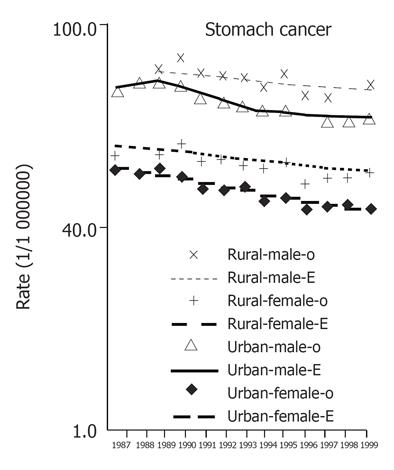 Figure 2 Time trends for age-standardized mortality rates (both observed and expected by model) of gastric cancer during 1987-1999 in China, by areas (rural and urban) and sex (per 100 000)

Figure 3 Time trends for age-specific mortality rates of gastric cancer during 1987-1999 in China, by areas (rural and urban) and sex, in CHIS data (rates per 100 000).
FACTORS INFLUENCING THE GASTRIC CANCER PATTERN IN CHINA

Despite a slight increase from 1970s to early 1990s, remarkable declines in gastric cancer mortality were shown during the last decade in China. These declines were largely due to the dramatic improvements in the social-economic environment, lifestyle, nutrition, education and health care system after economic reforms started two decades ago. These include better socio-economic circumstances, higher educational levels, better refrigeration, reduced consumption of salted, smoked, and chemically preserved foods, eating more fruit and vegetables and remarkably improved sanitary conditions of the house and living standards, supplement intake nutrients such as vitamin C, vitamin E, beta-carotene, selenium and decreased intake of nitrosamine, which was strongly suspected as a major risk factor for gastric cancer[20-31]. H pylori infection, which is defined by the World Health Organization as a definite gastric carcinogen, is linked to crowded living conditions, family size, sharing a bedroom, low socio-economic status, low educational level and poor sanitation, and infrequent hand washing before meals. The prevalence of H pylori infection has reduced dramatically due to the improved socio-economic status and lifestyle changes during last decades, especially among urban areas. In addition, widespread prescription of antibiotics may be responsible for reducing H pylori infection. Finally, some locally popular customs, such as drinking green tea, consuming tofu, and ginger have been suggested to have a possible protective effect on gastric cancer[32-35].

However, huge demographic changes in China make the total number of incident cases and deaths from gastric cancer slightly declined in men between 2000 and 2005, while the number increased in women, despite the significant declining trends in rates among all age groups (Table 2)[17-19].

It is estimated that gastric cancer currently ranks the third among most common cancers, and will remain a significant cancer burden in China during the next decade. It will be, undoubtedly, one of the keys in cancer prevention and control strategy in China. The essential package would focus on controlling H pylori infection, improving educational levels, advocating healthy diet and anti-tobacco campaign, searching for cost-effective early detection, diagnosis and treatment programs including approaches for curable management and palliative care[36].