Schistosomiasis is a chronic worm infection caused by a species of trematodes, the Schistosomes. We may distinguish a urinary form from Schistosomes haematobium and an intestinal-hepatosplenic form mainly from Schistosomes mansoni characterized by nausea, meteorism, abdominal pain, bloody diarrhea, rectal tenesmus, and hepatosplenomegaly. These infections represent a major health issue in Africa, Asia, and South America, but recently S mansoni has increased its prevalence in other continents, such as Europe and North America, due to international travelers and immigrants, with several diagnostic and prevention problems. We report a case of a 24-year-old patient without HIV infection, originated from Ghana, admitted for an afebrile dysenteric syndrome. All microbiologic studies were negative and colonoscopy revealed macroscopic lesions suggestive of a bowel inflammatory chronic disease. Since symptoms became worse, a therapy with mesalazine (2 g/d) was started, depending on the results of a bowel biopsy, but without any resolution. The therapy was stopped after 2 wk when the following result was available: a diagnosis of “intestinal schistosomiasis” was done (two Schistosoma eggs were detected in the colonic mucosa) and this was confirmed by the detection of Schistosoma eggs in the feces. Therapy was therefore changed to praziquantel (40 mg/kg, single dose), a specific anti-parasitic agent, with complete recovery. Schistosomiasis shows some peculiar difficulties in terms of differential diagnosis from the bowel inflammatory chronic disease, as the two disorders may show similar colonoscopic patterns. Since this infection has recently increased its prevalence worldwide, it has to be considered in the differential diagnosis of our patients with gastrointestinal symptoms.

S mansoni, a main agent of the intestinal form, is a trematode which infects human beings more frequently and also infects other primates too. Adult females of S mansoni deposit the eggs in the small veins around the large intestine of infected individuals. Some of the eggs may be trapped in the gut wall or break loose into it and are then eliminated by defecation. The eggs trapped in the gut wall are responsible for inflammatory and immunopathologic responses, leading to erythema, edema, granulomas, ulcerations, hemorrhages, and fibrosis. The infection is characterized by nausea, meteorism, abdominal pain, bloody diarrhea, rectal tenesmus, and hepatosplenomegaly[3,5].

Infection with S mansoni is still a major health issue in Africa, Asia, and South America[6-10], but recent epidemiological studies showed that its prevalence increases in Europe[11-15] and USA[16,17], due to international travelers and immigrants. In our country, the presence of acute S mansoni infection with progression to chronic lesions has been reported in a group of Italian travelers returning from Africa, showing both diagnostic and preventive problems[18].

Therefore, this infection was considered in the differential diagnosis of our patient with gastrointestinal symptoms. In particular, it is often hard to distinguish this infection from the bowel inflammatory chronic disease, since these two disorders may show similar colonoscopic patterns[19,20]. However, the contemporary presence of the two disorders (usually a chronic schistosomiasis precede the inflammatory disease in the same patient) represents a rare event[21,22].

We report a case of a 24-year-old patient without HIV infection, living in our region who immigrated from Ghana, and was admitted for an afebrile dysenteric syndrome. All microbiologic studies were negative and colonoscopy revealed macroscopic lesions suggestive of a bowel inflammatory chronic disease, and then treated with mesalazine, but without resolution. Further studies by bowel biopsy and feces examination revealed a Schistosoma infection, which was treated with praziquantel, a specific anti-parasitic agent and had a complete recovery.

A 24-year-old non-HIV patient immigrated from Ghana for economic reasons. He had pain in the left testicle 2 years ago and was hospitalized in his own country, where he was wrongly diagnosed and was given an unknown therapy. However, the pain occasionally recurred with exacerbation after the therapy. The patient was admitted to our hospital for diffuse abdominal pain with occasional bloody diarrhea and vomiting. Hematologic laboratory tests revealed no abnormalities; chest X-ray, and hepatosplenic ultrasonography were normal. The patient had no signs of distress but pain in epigastric and mesogastric regions. Small lymph nodes were observed in the latero-cervix area. All microbiologic studies were negative and colonoscopy revealed macroscopic lesions suggestive of a bowel inflammatory chronic disease reacutization (Figure 1A), like ulcerative colitis or a Crohn’s disease. During the colonoscopy, a bowel biopsy was done. Since symptoms became worse, we started a therapy with mesalazine (2 g/d), pending the results of the intestinal biopsy. One week later, a second colonoscopy documented a minor improvement in the endoscopic pattern and the therapy with mesalazine was continued. 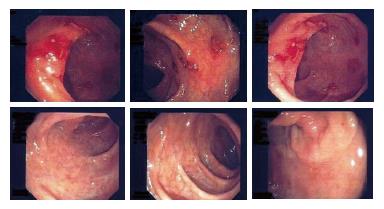 Figure 1 Colonoscopy before (A) and after (B) therapy.

Two weeks later, the result of the bowel biopsy was available but did not support a diagnosis of a bowel inflammatory chronic disease, as suggested by the endoscopic patterns. The histopathological findings in colonic biopsies were negative for a bowel inflammatory chronic disease. Glands were regular in shape, with a normal amount of cytoplasmic mucous and without crypt abscesses. By contrast, the number of inflammatory cells increased in the Lamina propria, mostly eosinophils. These aspects, together with the clinical symptoms and the nationality of the patient, suggested that a searching for a parasitic infestation should be made. We were able to detect two Schistosoma eggs in the colonic mucosa, both of them were surrounded by a granuloma’s reaction (Figure 2). Therefore, a diagnosis of “intestinal schistosomiasis” was made and was confirmed by the detection of S mansoni eggs in the feces (Figure 3). 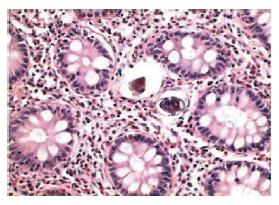 On this basis, after two weeks, mesalazine was changed to praziquantel (40 mg/kg, single dose). Three weeks later, a third colonoscopy documented a significant improvement (data not shown). Therefore, the therapy with praziquantel was continued at the same dosage, and further improvement of the colonoscopy pattern was documented one month later (Figure 1B). Nothing was found in the other laboratory or radiographic tests, except of a weak plasma eosinophilia.

Schistosomiasis is an infectious disease, which affects more than 200 million people worldwide. Since it is endemic in at least three continents, Africa, Asia, and South America, it represents the most important public health problem of the tropical and sub-tropical areas[1,2]. In particular, Ghana is one of the African countries where schistosomiasis is more prevalent in both the urinary and intestinal forms[23,24].

Since the transmission of schistosomiasis is linked to the intermediate snail hosts, in the endemic countries the disease is more prevalent in subjects whose skin is more susceptible to contacts with water in rivers, lakes, swamps or artificial irrigation systems. This may occur frequently in water-related activities of boatmen, fishermen, and rice workers. The infection is also promoted by unsanitary disposal of urine and feces and can occur in animals, such as dogs and cows[3,4,25].

S mansoni, a main agent of the intestinal form, together with S japonicum, S mekongi, and S intercalatum, is a trematode which parasitizes in human beings and also in other primates. Schistosoma eggs, upon deposition in the feces, mature in suitable environmental conditions (such as fresh water), giving rise to its larval forms (miracidia). These swimming forms reach and infect snails, species of the genus Biomphalaria (intermediate hosts), and mature in cercarie[26,27]. The cercarie are the infective forms for human beings and come out from the snails under specific conditions of light and temperature and infect men through the skin. During penetration, the cercarie shake off their tails and change into the next stage of the life cycle, the schistosomula, that reach the lungs and the liver. In the intrahepatic portal system, the worms complete the sexual stages of their development. Then, the adult females deposit the eggs in the small veins around the large intestine. Some of the eggs may be trapped in the gut wall or break loose into it and are then eliminated by feces. The eggs trapped in the gut wall are responsible for the inflammatory and immunopathologic responses, leading to erythema, edema, granulomas, ulcerations, hemorrhages, and fibrosis[28,29]. Regarding the pathogenesis of the disease, recent studies have dramatically changed the acknowledgment in this field. The T helper (Th) CD4+/CD8- cells, derived from hepatic granulomas of infected mice, may produce cytokines such as interleukin-2, interleukin-4, interferon-γ, with a type Th0 immuno-mediate response. After a longer period of infection, the murine models could show a type Th2 response[30-33].

The symptoms of our patient included nausea, meteorism, abdominal pain, bloody diarrhea, rectal tenesmus, and hepatosplenomegaly, which are consistent with those already reported[5]. The case showed some difficulties in terms of differential diagnosis of a chronic inflammatory bowel disease, since anatomical pathologic reports, in relation to the immediate endoscopic evidence, were not available.

Previous studies stated that colonoscopic findings are suggestive of schistosomiasis in about 45.3% of patients, but S mansoni eggs in feces are detectable in only 11.1% of the patients with colonic biopsies positive for S mansoni[34,35]. Endoscopic findings may not be typical and it is often hard to distinguish Schistosoma infection from a chronic inflammatory bowel disease, since these two disorders may show similar patterns, as shown in our patient[19,20].

Moreover, cystoscopy or rectosigmoidal endoscopy may be useful. In our case, the first probable diagnosis of bowel schistosomiasis was made by the detection of two Schistosoma eggs in the colonic mucosa, surrounded by a granuloma’s reaction. During the disease’s acute phase, the histological examination may show the presence of eggs on the ulcerated lesions as well as polyps-like forms on the bowel mucosa[36,37]. However, these aspects may be macroscopically and microscopically evocative of other disorders, such as chronic inflammatory bowel disease and infective colitis[38,39]. Therefore, diagnosis of schistosomiasis can be made by urine and feces examination and isolation of the agent.

When the correct diagnosis is made, the complete recovery of the patient can be achieved using a specific anti-parasitic therapy with praziquantel[40,41]. The intimate relationship between human beings and infected water leads to schistosomiasis elevated prevalence. Elimination of the intermediate hosts and avoiding the contact with infected water sources are the measures to prevent schistosomiasis[42]. For the treatment, current drugs include praziquantel, metriphonate[43], and oxamniquine[41].

We reported in this paper a case of an unsuspicious schistosomiasis, initially treated with mesalazine, for its peculiar difficulties in terms of differential diagnosis from a chronic inflammatory bowel disease. We suggest that the detection of the Schistosoma eggs in feces should always anticipate the colonoscopy examination. Since the prevalence of schistosomiasis has been increasing in Europe and USA, due to international travelers and immigrants[16-18,44], schistosomiasis should be considered in the differential diagnosis of patients with gastrointestinal symptoms.