AIM: To review the cases reported in the literature, examined their clinicopathological features, and evaluated the efficacy of different therapeutic modalities for this rare condition.

METHODS: A search of the MEDLINE database revealed 16 cases of pericarditis carcinomatosa (PC) originating from GC reported in the literature between 1982 and 2005. Additional detailed data were obtained from the authors of these studies for subsequent clinicopathological investigation. We have also described about a case study from our own clinic.

RESULTS: The mean age of cases with pericarditis carcinomatosa originating from GC was 54 years. Females were diagnosed at a younger age (46.3 years) compared to males (58 years). The mean survival period after diagnosis was 4.5 mo. No statistical differences in the length of survival time were found between different therapeutic modalities, such as drainage, and local and/or systemic chemotherapy after drainage. However, three cases who underwent systemic chemotherapy survived for more than 10 mo. Cases that developed metachronous cardiac tamponade for more than 2 years after the diagnosis of GC generally survived for a longer period of time, although this was not statistically significant. Multivariate analysis revealed that low levels of carcinoembryonic antigen (CEA), and CEA and/or cancer antigen 19-9 (CA 19-9) were associated with longer survival.

CONCLUSION: Cases with low levels of CEA, and CEA and/or CA 19-9 should undergo systemic chemotherapy with or without local chemotherapy after drainage.

Malignant pericardial effusion typically develops slowly and can spontaneously regress or remain stable. Some cases, however, may progress to cardiac tamponade[1]. Pericardial effusion can be caused by common primary malignancies that metastasize to the pericardium, such as lung cancer, lymphoma, breast cancer, and leukemia[2-4]. Cardiac tamponade due to pericarditis carcinomatosa (PC) originating from a primary gastric cancer (GC) is a rare condition. It is usually detected during the terminal stages of GC; however, it is also detected during cardiac emergencies. There are several reports of cardiac tamponade due to GC; however, most of them are only case reports. Due to the limited number of cases seen in a single institute, we performed a clinicopathological study of the cases of PC originating from GC reported in the literature, including a case from our hospital, and investigated the best therapeutic modality for this rare condition.

A search of the MEDLINE database revealed 16 cases of PC originating from GC reported in the literature and meeting proceedings between 1982 and 2005 (Table 1)[5-15]. Cases in which PC was synchronous with GC and its recurrence were included. In addition, we asked the authors of these studies to review the available medical records to obtain more information about the cases.

A 36-year-old female patient, diagnosed with Kruckenberg’s tumor, who consulted our clinic for further examination, was included in this case study. Endoscopic examination revealed GC of the antrum. The patient underwent distal gastrectomy with lymph node dissection. Histological examination showed that signet-ring cell carcinoma was mostly confined within the mucosal layer and had slightly invaded the muscular layer. Histology also showed lymph node metastases in a wide area with massive permeation into the lymphatic vessels. The patient underwent postoperative chemotherapy of sequential methotrexate plus 5-fluorouracil. Twenty-seven and a half months after the operation, she developed nausea and laboratory data showed elevated levels of aspartate aminotransferase (95 IU/L), alanine aminotransferase (152 IU/L) and alkaline phosphatase (312 IU/L). An abdominal CT scan revealed massive pericardial effusion and left pleural effusion. The patient underwent pericardiocentesis and left pleural centesis. Cytological examination of the fluid revealed signet-cell carcinoma. After drainage, 10 mg of cisplatin was infused into the pericardial space. The pericardial effusion subsequently disappeared. She underwent injection chemotherapy into the pleural space (135 mg cisplatin) and systemic chemotherapy (cisplatin and sequential methotrexate plus 5-fluorouracil) until the pericardial effusion reappeared 9.5 mo later. Pericardiocentesis was performed again and 150 mg cisplatin was infused into the pericardial space. She also underwent systemic chemotherapy, however, died 13 months after the onset of PC.

The clinicopathological features of cardiac tamponade due to PC originating from GC are presented in Table 2. More than half of the patients were males, an occurrence similar to that generally seen in GC. The mean age of the 17 cases was 54 years (range, 33-69 years). Females diagnosed with cardiac tamponade tended to be younger (mean, 46.3 years; range, 33-65 years) as compared with the males (mean, 58 years; range, 42-69 years). Of the 17 cases, 14 died within 6 mo of diagnosis. Figure 1 shows the Kaplan-Meier survival curve for all the 17 cases. The mean survival after the diagnosis of PC was 4.5 mo (range: 1.0-14.0 mo). Histological data was obtained for 12 of the cases. Of these, 11 were of the less differentiated type. Eleven of the twelve cases also showed lymphatic permeation, and nine showed lymph node metastasis. 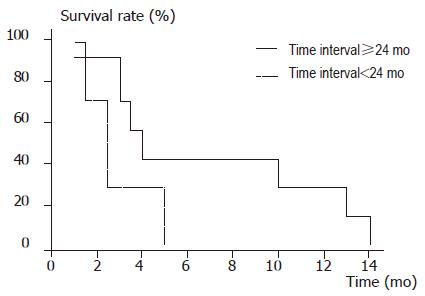 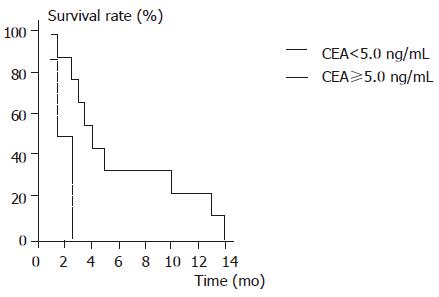 Figure 4 Kaplan-Meier survival curve according to CEA levels. The cases with normal CEA levels had a longer survival period as compared to those with high CEA levels (P = 0.0071).
DISCUSSION

Secondary tumors of the heart and/or pericardium are rarely diagnosed in clinical practice. However, it is not uncommon to find these during autopsy cases. Secondary cardiac metastases most frequently arise from primary lung tumors. Primary GC rarely metastasize to the heart, with 4.3-7.7%[16-19] reported from autopsy investigations.

We investigated 17 reported cases of cardiac tamponade due to PC originating from GC, and observed several characteristics specific to this condition. The mean age of the patients was 54 years, which was slightly younger than the average age reported for GC. Females tended to be diagnosed at a younger age than males. Histopathological results of 11 out of the 12 cases showed less differentiated tumors with massive lymphatic involvement. Raven[20] and Hanfling[21] reported that the hematogenous route was the most common metastatic pathway to the heart, while Warren and Gates[22] and Kline[23] believed that the cardiac lymphatic system was the major metastatic pathway to the heart. The fact that almost all cases showed massive lymphatic permeation suggested that the mechanism of pericardial metastasis might be through the lymphatic system.

There is no defined therapy for pericardial metastasis. Most reports describing therapeutic modalities for cardiac tamponade due to malignant pericarditis were based on cases in which lung cancer was the primary tumor. Drainage of the malignant effusion either by percutaneous pericardiocentesis or by pericardiectomy should be performed if this condition is diagnosed. The prognosis of cardiac tamponade caused by malignant pericarditis is grave and survival is limited. Fraser et al[24] reported the prognosis of 21 cases and more than half of the 21 cases originated from lung cancer. Seven patients treated with pericardiocentesis and provided with supportive care had a median survival time of 3 wk. Eight patients treated with pericardiocentesis and either radiotherapy and/or intrapericardial or systemic chemotherapy had a median survival period of 3.5 mo. Six patients treated with pericardiocentesis and pericardiectomy with or without radio- or chemotherapy had a median survival period of 6 mo. Moreover, Appelqvist et al[1] reported the prognosis of three cases of pericardiectomy. Among them, two cases had primary lung cancer, while the primary tumor was of unknown origin in the third case. The case who did not undergo treatment only survived for 5 wk, the case treated with radiotherapy survived for 7 wk, and the case treated with systemic chemotherapy survived for 9 mo[1].

To our knowledge, there are no reports investigating the different therapeutic modalities available for the treatment of cardiac tamponade originating from GC. Our review of the literature showed that the therapeutic modalities in 6 cases were only the drainage of malignant effusion, while the 10 cases underwent chemotherapy after the drainage. In addition, the chemotherapy treatment varied in the cases with the routes of administration of anti-cancer agents (e.g., intrapericardial infusion and/or systemic administration), the type of anti-cancer agents, and the dose of anti-cancer agents. More than half of the cases treated with local chemotherapy received various doses of cisplatin. We found that there were no complications caused by local chemotherapy in our review of the literature, and cisplatin was the most frequently used agent for local chemotherapy. The agents used for local chemotherapy should be less irritable to the heart. As the number of cases was limited, we were unable to determine which treatment was the most effective for this condition. However, we did find that cases treated with systemic chemotherapy tended to survive longer than those who were not (P = 0.0579).

The period of time from the diagnosis of gastric cancer to the onset of cardiac tamponade may influence prognosis. When the time period was less than 2 years, the survival was 2.9 mo, and if the time period was over 2 years, the survival increased to 6.9 mo. The cases with high levels of either of the tumor markers CEA or CA 19-9 had a shorter survival period than those with low levels of either of these markers.

Honda et al[25] reported a case of cardiac tamponade originating from lung cancer, in which the malignant cardiac effusion was controlled by weekly paclitaxel therapy. Sakusabe et al[15] also reported that weekly administration of paclitaxel was effective for the control of malignant pericardial effusion originating from GC. There are many reports demonstrating that malignant ascites arising from GC can be controlled by paclitaxel in patients diagnosed with peritonitis carcinomatosa of GC. We confirmed that the level of paclitaxel in malignant ascites remained effective until 72 h after systemic administration (submitted for publication). Paclitaxel may, therefore, be a promising agent for systemic chemotherapy, and should be considered for the treatment of malignant pericardial effusion.

In summary, we were unable to reveal which therapy was the best for extending the life expectancy in cases of PC originating from GC. However, the cases with systemic chemotherapy survived for a longer period of time compared to the cases treated with drainage only or with local chemotherapy. The cases that developed cardiac tamponade due to PC arising from GC more than 2 years after the diagnosis, and the cases in which the levels of CEA and CA 19-9 were not elevated may have a possibility of surviving for a longer period of time. Such cases should undergo chemotherapy following emergency pericardiocentesis. While a specific chemotherapeutic strategy has not yet been developed for these cases, the use of paclitaxel for systemic, and cisplatin for local chemotherapy may be promising for the treatment of cardiac tamponade caused by PC arising from GC.