Colon lipoma is remarkably rare in clinical practice. We reported a case of ascending colon lipoma in an 83-year-old woman. She was asymptomatic with a lipoma of 35 mm×30 mm×24 mm in size which was found by routine colonoscopy. Right hemicolectomy was performed uneventfully. The diagnosis was made by histological examination. Reviewing the literature and combining with our experience, we discussed the clinical features, diagnosis and treatment of this uncommon disease.

Colon lipoma is generally mildly symptomatic or asymptomatic. Even in the condition of presenting with dramatic characteristics in colonoscopy, barium enema and CT scan, colon lipoma is still underemphasized and misdiagnosed. We report a case of submucous ascending colon lipoma and review the literature to evaluate the clinical features, diagnosis and treatment of this disease.

An 83-year-old woman was admitted to the General Surgery Department of our hospital on January 2003 for intermittent mild anal pain. She denied any abdominal pain, constipation, diarrhea, hematochezia or melena. She had a past medical history of cerebral infarction for at least 10 years, and no cancer records were available. She received appendectomy for acute appendicitis 9 years ago. No meaningful findings were obtained in abdominal examination. Complete evaluations of the ano-rectum were carried out which included visual inspection, digital examination and anoscopy. The diagnosis of external hemorrhoid was established and conservative treatment was adopted. Detailed laboratorial studies showed all results within normal limits, including complete peripheral blood cell counts, blood biochemistry and carcinoembryonic antigen. Fecal occult blood test was negative thrice consecutively. Colonoscopy was performed afterward, and a yellowish hemispherical tumor of 45 mm in diameter was detected at the site of ascending colon. The overlying mucosa was smooth, and the lesion was soft and compressible (Figure 1A). According to these features, the diagnosis of submucous tumor (SMT) was made by colonoscopy. Biopsy showed non-specific colitis. Barium enema revealed an ovoid filling defect with smooth border at the proximal area of colon hepatic flexure (Figure 1B). Abdominal CT scan found a pedunculated neoplasm protruding into the lumen of ascending colon with sharp margin and soft tissue density (Figure 1C). Lipoma was considered to be the most probable cause, but malignancy could not be excluded. Finally, the patient underwent laparotomy, although she was asymptomatic and the tumor showed benign features. Right hemicolectomy was performed uneventfully. Surgery certified the diagnosis of colon lipoma. Macroscopic inspection of the resected colon segment showed a smooth round polypoid submucous tumor with elastic character and 35 mm×30 mm×24 mm in size (Figure 2A). Fault of the specimen demonstrated the tumor with pedunculated appearance. The base of the lesion was 8 mm in size. The tumor was covered by normal mucosa and had uniform parenchyma in bright yellow color (Figure 2B). Histological examination revealed characteristic lipoma of colon (Figure 3). 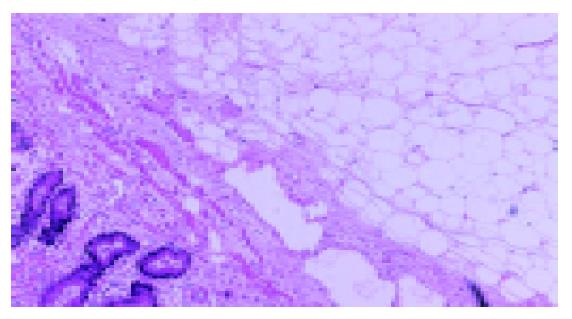 Colon lipoma was described initially by Bauer in 1757. The incidence was estimated to be about 0.26%[1] 10 years ago, however the available data was kept insufficient during the recent decade. Rogy et al[2], reported that colon lipoma constituted 0.3% of the cases treated for colorectal diseases and 1.8% of the cases of benign colorectal tumor during the same period. Elders are more likely to be involved, and neither male nor female was found to be predominant according to most of the current literatures, but this conception was disagreed by some authors who reported a higher incidence in women than in men[2,3]. Most of the lesions were located at the right side of large bowel, accounting for nearly 90% of cases. The majority of colon lipomas presented as single while only 10% of cases were multiple. The most frequent type was submucous lipoma with sessile or pedunculate appearance, the remainder as subserosal lipoma was less than 10%. Generally, colon lipoma is mildly symptomatic or asymptomatic. Sometimes it was detected accidentally in examinations for other purpose. Rogy et al[2], insisted that the clinical manifestations were associated with the size of tumor and not related to the involved segment of large bowel. As widely accepted, lipoma larger than 20 mm in diameter, is likely to be symptomatic, it is quite unusual that the lipoma with a maximum diameter of 35 mm is asymptomatic. The common symptoms of colon lipomas include abnormal bowel habits, abdominal pain, diarrhea, rectal bleeding, abdominal discomfort and melena. Occasionally, patients may complain that a lump of hemorrhagic tissues defecate from the rectum due to self-amputation of the lipoma[3]. The episode of intussusception or intestinal obstruction can also be seen in the patients with larger lipoma[4]. Even in some situations, abdominal emergency due to the complications of colon lipoma was the first manifestation of these patients. Sometimes colon lipoma can also be the source of massive lower gastrointestinal bleeding[5].

Since no specific symptoms and physical signs are available, accurate preoperative diagnosis is difficult to achieve. Regarding the age and symptoms of these patients, malignant colon tumors are often considered. With the development of colonoscopy, barium enema and CT scan, some characteristic findings of colon lipomas are useful in making diagnosis, even there is a case report that colon lipoma was correctly diagnosed by sonography[6]. For the submucous lipoma, colonoscopy may directly visualize the mass with tenting of the mucosa, which may be easily indented with a closed biopsy forceps. As the forceps are withdrawn, the tumor will soon spring back to resume its previous shape (pillow or cushion sign)[7]. The pressure exerted on the lesion may compress the superficial vessels and the distinctive yellow color of fat will disclose. Adipose tissue may protrude through the biopsy site (naked fat sign) which reveals fatty characteristic of the tumor[1]. But usually biopsy is not recommended in the patients with suspected lipoma, because the lesion is beneath the normal mucosa and biopsy often cannot promote diagnosis just as the result of non-specific colitis in our case report, on the contrary, it increases the risks of bleeding and perforation. According to the radiolucency of fatty tissue, barium enema is helpful in making diagnosis by showing a relatively radiolucent mass. Generally, lipoma appears as an ovoid, well-demarcated filling defect. The characteristic of lipoma on barium enema is so-called “squeeze-sign” which means that the tumor can deform by external pressure or peristalsis. Computerized tomography is considered to be the definitive diagnostic measure in recognizing colon lipomas because the masses present characteristic fatty densitometric values[8]. On CT scan image, lipoma has uniform appearance with fat-equivalent density and smooth border. But for small lipoma, the diagnostic value of CT is low.

Patients with small asymptomatic colon lipomas need regular follow-up, and additional treatments are unnecessary. Larger lipoma may cause symptoms, so resection should be considered for those bigger than 20 mm in diameter[9]. Currently, the indication of endoscopic resection of colonic lipoma is still a controversial subject. In our opinion, lipoma is unreliable to endoscopic removal, partly because the fatty tissue is inefficient conductor for electronic current and may result in a significantly high rate of complication[10]. The risk of perforation or hemorrhage is notably increased when the lesion is sessile or broadly-based. Surgical resection seems to be the ideal choice of treatment, especially when the malignancy cannot be completely excluded. Colotomy excision or segmental colon resection is recommended for complete removal of the lipoma. If the preoperative diagnosis of colon lipoma can be made correctly, extent of surgery may be appropriately limited.