AIM: To investigate the effect of emodin on small intestinal peristalsis of mice and to explore its relevant mechanisms.

RESULTS: Different dosages of emodin can improve small intestinal peristalsis of mice. Emodin increased the content of motilin, while reduced the content of somatostatin in small intestine of mice significantly. Emodin 0.2, 0.4, 0.8, and 1.6 g/L decreased PD when there was glucose. However, emodin had little effect when glucose was free. The Na+–K+-ATPase activity of small intestinal mucosa of mice in emodin groups was inhibited obviously.

Rhubarb has been used to treat gastrointestinal disorders for hundreds of years. The effective components of rhubarb are anthraquinone derivatives, emodin being the most important. Traditional viewpoints hold that emodin primarily acts on the large intestine and it can enhance the excitability of smooth muscles of the large intestine[1,2]. We have obtained more than 95% pure emodin from China Pharmaceutical University In this study, we evaluated whether emodin had any effects on small intestinal peristalsis of mice and explored its relevant mechanisms.

Fifty healthy ICR mice (weighing 18-22 g) were randomly divided into five groups: normal control, model, low dose of emodin, medium dose of emodin and high dose of emodin. The animals in emodin treatment groups and model group were put through intragastric gavage (IG) with compound diphenoxylate 0.2 mL/10 g. Those in normal control were treated with NS. Thirty minutes later different medications were given: mice in normal control and model group were given NS, and those in emodin treatment groups were given emodin 0.1, 0.2, and 0.4 g/kg respectively. All of the animals were administered as above for 1 wk and were fasted for 12 h before the last administration.

Determination of motilin and somatostatin

Fifty mice were administered as above. Thirty minutes after the last administration, the small intestinal tissues were treated according to Sun et al[5]. The contents of motilin and somatostatin in small intestine of mice were determined by radioimmunoassay according to the protocols of the kit.

About 8 cm of jejunum was taken, and cleaned with K-H solution. The wall of intestinal sacs was reverted. We ligated one end, and the other end was tied with tubuliform glass-tube. The reverted intestinal sac full of K-H solution was put in a tube full of 25 mmol/L glucose K-H solution (glucose K-H) or glucose-free K-H (at 37 °C). The mixed gas including 50 mL/L CO2 and 95% O2 was injected. The electrical potential difference (PD) was measured across the wall of reverted intestinal sacs. The drugs in experiment were dissolved by glucose-free KH or glucose KH, PH was regulated and the osmotic pressure was modulated with mannitol. PD was recorded every 2.5 min and observed 15 min continuously.

All data were expressed as mean±SD. Statistical analysis was performed using unpaired t test. Differences were considered significant when P≤0.05. 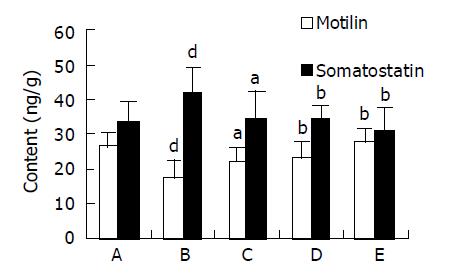 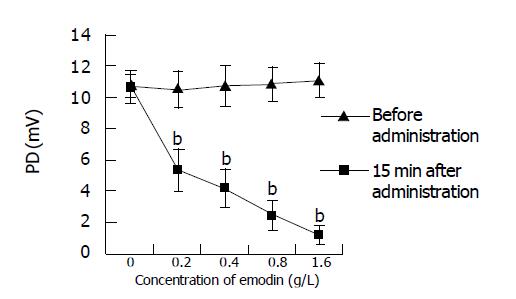 Effect of glucose-free K-H and different concentration of emodin on PD of isolated small intestine There are no significant differences in comparison between the same group before administration and 15 min after administration. The results indicated that emodin dissolved by glucose-free K-H had no evident inhibitory effect on PD of isolated small intestine (Table 2).

Rhubarb is one of the most frequently used evacuants in clinic. Emodin is one of the primary components of rhubarb. Emodin is thought to be acting mainly on the large intestine[8-11]. In this study, we have attempted to investigate the effect of emodin on small intestinal peristalsis of mice and to explore its relevant mechanisms.

Motilin, which is made up of 22 amino acids, has long been recognized as an important endogenous peptide regulator of gastrointestinal motor function. Motilin is secreted by M0 cells distributing in the recess of mucosa in duodenum and jejunum[12-14]. In the interphase of digestion, motilin is secreted with periodicity. Motilin can touch off the occurrence of three phases of migrating motor complex (MMC) through acting on the motilin nerve cells in the nervous system of intestinal tract, which arouses the intense constriction of stomach and segmentation contraction of small intestine. The punchy contractive wave of three phases of MMC extended to a distance along the small intestine at the rate of 5-10 cm/min. And when it passes through the gastrointestinal tract, it can clean up the contents of gastrointestine including the alimentary residue of last diet, cellular fragment falling off and bacteria. So motilin is a street sweeper[15]. Motilin plays an important role in regulation of gastrointestinal movement by touching off the occurrence of three phases of MMC. In our study we found that the content of motilin in small intestine of mice in model group was lower than that in normal control, and after treatment with emodin, the content of motilin was increased at different degree. So emodin can enhance the function of small intestinal peristalsis of mice by promoting secretion of motilin.

Somatostatin distributed in the gastrointestinal tract diffusely. Somatostatin can inhibit gastrointestinal function by two ways: one is by inhibiting the activity of adenylyl cyclase through inhibitory G protein; the other is by inhibiting the release of cholinergic neurotransmitter[16-19]. The result of this study showed that the content of somatostatin in small intestine of mice was increased significantly comparing with normal control. Different dosages of emodin could inhibit the secretion of the somatostatin prominently. This may be another mechanism of emodin to promote the movement of small intestine.

In conclusion, emodin can enhance the function of small intestinal peristalsis of mice and its mechanisms may be relevant to promoting secretion of motilin, lowering the content of somatostatin and inhibiting Na+–K+-ATPase activity of small intestinal mucosa.