METHODS: We evaluated the colonoscopic findings and liver function of 47 patients with liver cirrhosis over a 6-year period. The main cause of liver cirrhosis was post-viral hepatitis (68%) related to hepatitis B (6%) or C (62%) infection. All patients underwent upper gastrointestinal endoscopy to examine the presence of esophageal varices, cardiac varices, and congestive gastropathy, as well as a full colonoscopy to observe changes in colonic mucosa. Portal hypertensive colopathy was defined endoscopically in patients with vascular ectasia, redness, and blue vein. Vascular ectasia was classified into two types: type 1, solitary vascular ectasia; and type 2, diffuse vascular ectasia.

CONCLUSION: As the Child-Pugh class worsens and platelet count decreases, the prevalence of portal hypertensive colopathy increases in patients with liver cirrhosis. A colonoscopic examination in patients with liver cirrhosis is indicated, especially those with worsening Child-Pugh class and/or decreasing platelet count, to prevent complications such as lower gastrointestinal bleeding.

We evaluated the liver function and colonoscopic findings in 47 patients with liver cirrhosis over a 6-year period. Liver cirrhosis was confirmed by histology or by compatible physical findings, laboratory data, and radiographic features. The etiologies of cirrhosis are shown in Table 1. The main cause of liver cirrhosis was post-viral hepatitis (68%) related to hepatitis B (6%) or C (62%) infection. In addition, 13 patients (27%) had hepatocellular carcinoma. 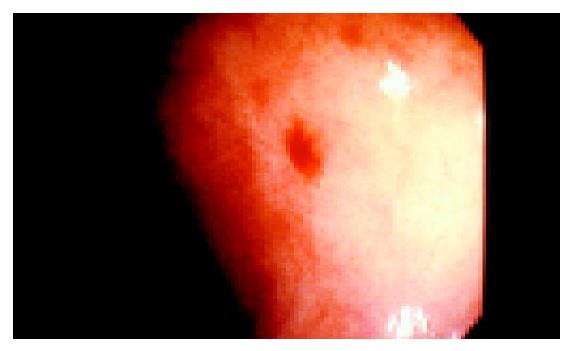 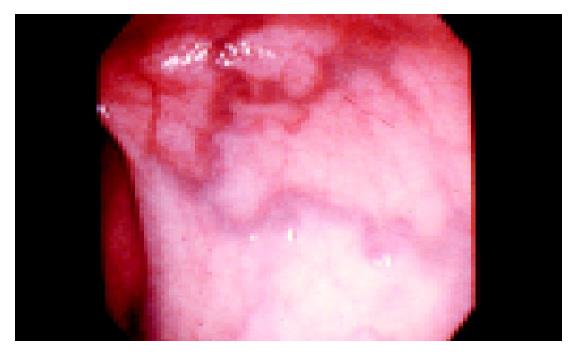 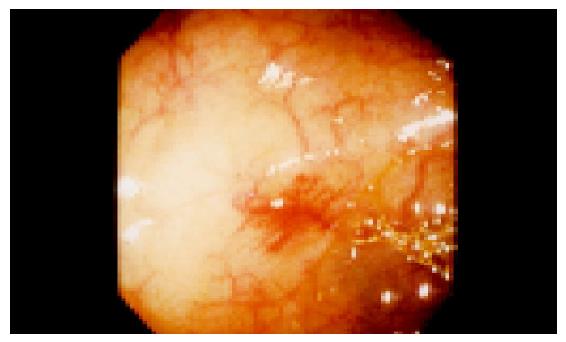 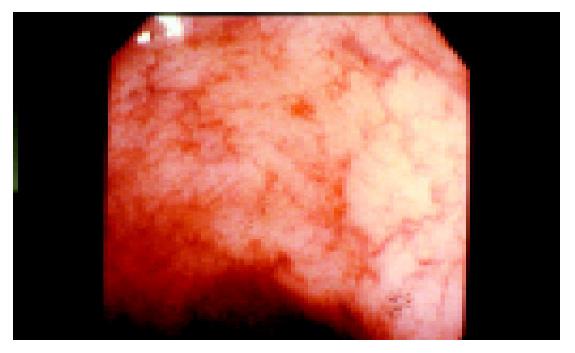 Data are expressed as mean±SD. Statistical comparisons were made with the χ2 test. A P value less than 0.05 was considered significant.

Various vascular abnormalities have been observed in the mucosa of upper gastrointestinal tract of cirrhotic patients, including gastroesophageal varices and gastric antral vascular ectasia[1-3]. These vascular lesions account for most of the upper gastrointestinal bleeding in cirrhotic patients. Similarly, vascular ectasias and varices may occur in the colonic mucosa of cirrhotic patients, and bleeding from these vascular lesions was reported[4,5]. In the present study, portal hypertensive colopathy was present in 66% (31/47) of the cirrhotic patients. Several studies have described the colonic findings associated with cirrhosis and portal hypertension was observed in 50-84% patients with liver cirrhosis[6-15]. Histologic examination of rectal mucosal lesions in patients with liver cirrhosis revealed dilatation of blood vessels in the mucosa, increased lymphocytes and plasma cells in the lamina propria, and edema of the mucosa[4,7]. In our study, portal hypertensive colopathy was found in 23% of patients in rectosigmoid colon, 11% in the descending colon, 24% in the transverse colon, 23% in the ascending colon and 16% in the cecum.

In conclusion, as the Child-Pugh class worsens and platelet count decreases, the prevalence of portal hypertensive colopathy increases in patients with liver cirrhosis. Colonoscopic examination is needed in these patients, especially those with worsening Child-Pugh class and decreasing platelet count, to prevent complications, such as lower gastrointestinal bleeding.