METHODS: Thirty-five New Zealand rabbits were included in the study. VX-2 tumor was implanted subcutaneously in 14 rabbits and intrahepatically in 6 for pre-experiments. VX-2 tumor was implanted intrahepatically in 12 rabbits for experiment and three were used as the control group. DWI, T1- and T2-weighted of MRI were performed periodically in 15 rabbits for experiment before and after implantation. The distinction of VX-2 tumors on DWI was assessed by their apparent diffusion coefficient (ADC) values. The statistical significance was calculated by analysis of variance (ANOVA) of the randomized block design using SPSS10.0 software.

CONCLUSION: The DWI signal of rabbit VX-2 tumor has its characteristics on MR DWI and DWI plays an important role in diagnosing and discovering VX-2 tumor.

The main imaging diagnostic methods of hepatic tumor include computed tomography (CT), magnetic resonance imaging (MRI) and ultrasonography (US)[1-4]. In recent years, however, the application of MRI, especially MR diffusion-weighted imaging (DWI) in the diagnosis of hepatic tumor and evaluation of its progression is much less than that of CT and US[5-8]. With the development of software and scanning technology of MRI, many problems, for example, poor imaging quality, slow scanning speed, have been overcome[8-11] and more studies on it have been reported in recent years[12-15].

Diffusion is caused by the free movement of water molecule[8,10,13-16]. The amount of diffusion is determined by the diffusion coefficient (DC). However, because the measurement of DC in vivo may be affected by many factors, such as temperature, perfusion, magnetic susceptibility in the tissue, or other kinds of the motion, the apparent diffusion coefficient (ADC) is used much more in clinic than DC[14,17-19]. DWI was initially used to evaluate early ischemic stages of the brain and its values have been accepted in recent years all over the world. At the same time, several research groups have concluded that DWI has great potential for understanding normal and pathological brain function[20]. But few studies are available on the value of DWI in diagnosing or evaluating the progression of hepatic lesions, especially the VX-2 tumor of rabbits[17,21-23].

Hepatocellular carcinoma (HCC) is one of the most frequent tumors and many studies about its CT, DSA, MRI characteristics have been undertaken in recent years[3-5,6-9,24]. Rabbit VX-2 tumor is the most valuable animal model of HCC in researching its imaging characteristics[25,26], because the blood supply to VX-2 tumor and HCC is similar[23,26,27].

The purpose of our experiment was to investigate the implanting method of rabbit liver VX-2 tumor and the characteristics of rabbit VX-2 tumor on DWI.

The VX-2 tumor strain of rabbit was provided by the Fourth Military Medical University.

First, we extracted the VX-2 tumor strain from the subcutaneous tumor which was implanted during the preexperiment. After the rabbits were anesthetized, by injecting 3% soluble pentobarbitone into auriborder vein or abdominal cavity at a dose of 1 mL/kg, we incised the skin to expose one cauliflower of the tumor and then excised one cauliflower from it. Then we put the tumor parenchyma into saline containing 40000 unit gentamycin per 100 mL, and discarded the necrosed tissue and blood clot and then cut it into 1-2 mm3 microblocks.

After implanting, we injected 200000-unit penicillin into the muscle daily for 4 d. At the same time, the animal room was kept dry and ventilated.

Based on apparent diffusion coefficient (ADC) value of regions of interest (ROIs), images were evaluated quantitatively, including the difference between normal rabbit liver parenchyma and VX-2 tumor and between different b-value groups. ADC values of normal rabbit parenchyma were obtained by the average value of five different ROIs (50 mm2 each area). We took 80% rabbit VX-2 tumor area as their ROI and measured their ADC values.

The statistical significance was calculated by analysis of variance (ANOVA) of the randomized block using SPSS10.0 software.

The results of rabbit VX-2 tumor implantation are shown in Table 1.

The image quality and tumor signal of DWI were higher when the b-value was 100 than those when the b-value was 300 (Figures 1A and 1B). Eight tumors were detected with b-value 100 on DWI while 10 tumors were detected with b-value 300 on the 7th d after implantation and 15 tumors were detected on DWI with b-value 100 or 300 after 14 d. All tumors showed high signals on DWI. The tumor signal on DWI was fairly uniform 14 d after implantation while it was not uniform on the 21th and 35th d and it also showed higher signals in different area tumor sometimes. In addition, one or two low signal areas could be seen in three tumors on the 21th d. T1WI, T2WI or DWI could not be seen on d 35. The margin of 15 tumors not only displayed distinctly but also differed significantly from the structure around. ADC values of all tumors are summarized in Table 2. As shown in Figure 1C, 12 of the 15 cases appeared to have low signals while three were equal or slightly low signals. The number of displayed tumors on T1WI and T2WI was same as that on DWI on the 21th or 35th d. The tumors displayed low signals on T1WI and high signals on T2WI. In addition, the margin of most tumors was distinct but less significant on T1WI or T2WI (Figures 1D and 1E) between the tumor and the liver parenchyma with different than that on DWI (Figures 1A and 1B). One of them displayed multi-tumors sizes, the biggest diameter of tumor was about 4 cm×4 cm. They showed different high signals on DWI, and low signals on TIWI and high signals on T2WI. In addition, the size of low signal zones was different in the tumor. The results of autopsy are shown in Figure 2. 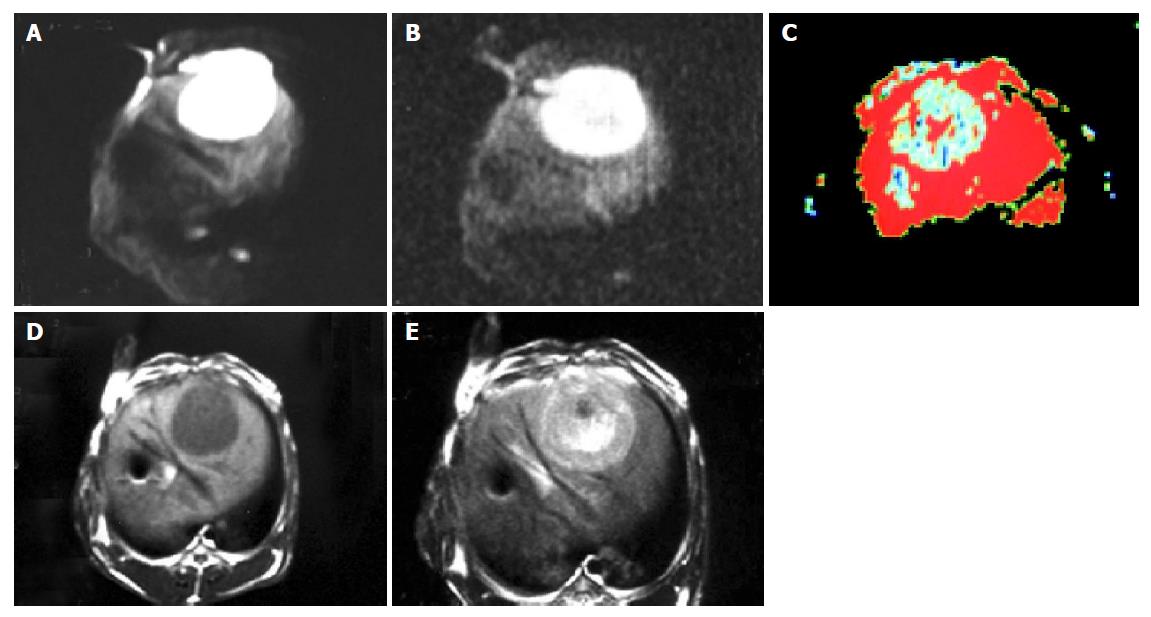 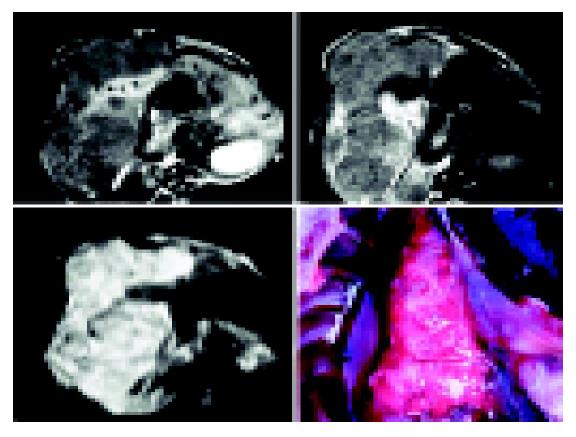 MRI and DWI were performed periodically on 12 rabbits in experiment to observe their growing and transferring or metastasizing characteristics (Table 3).

Intrahepatic VX-2 tumor appeared pale with no envelope and identifiable margin, the extrahepatic surface was uneven (Figure 3). Lung metastases showed many pale nodular foci in size of Mung bean or soybean (Figure 2). After the tumor was removed, the extralayer was thick and tough with rich blood supply. The interior tumor cells were pale. When the tumor grew bigger, irregular cavities could be found in it. Under low power microscope, we could see multilump nests without clear margin. In addition, more parenchyma tissue was found in the tumor than connective tissue in the tumor and there were rich and new blood capillaries between tumor cells. Calcified part in VX-2 tumors could be observed at times. Under high power microscope, VX-2 tumor cells mainly were big and irregular. In addition, the cytoplasm was rich and the nuclei were thickly stained and irregular. 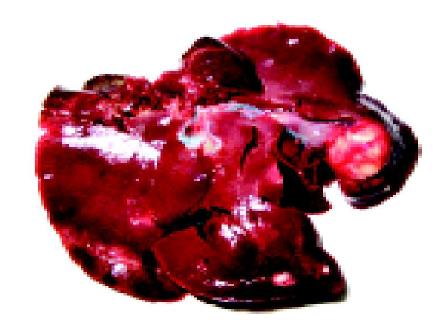 VX-2 tumor is induced by the Shope virus and develops after 72 times or more transfer of culture[17,23,24]. Its blood is mainly supplied by the hepatic artery. VX-2 tumor is implanted easily and grows quickly so that the diameter of the tumor can reach 2 cm, 3 or more weeks after implanted and it is able to metastasize to the liver, the lung, mediastinum in the early stage, which is suitable for making animal models. The rate of lung metastasis was 91% (10/11) in our group. In addition, it is advantageous to be manifested by imaging because VX-2 tumor is a solid tumor and rabbit weight is relatively great. Thus, in research of HCC imaging, VX-2 tumor is the widely used animal model[24,25].

The methods of VX-2 tumor implantation mainly include tumor cell injection by hepatic artery catheterization, percutaneous transhepatic injection of tumor cells and direct intrahepatic tumor block implantation[23,24,27]. The successful rate of the last method is the highest, which is usually more than 90%, while that of other two methods is relatively low, which is often lower than 70%[24-26]. In our experiment, we chose tumor block implanting and found the successful rate of intrahepatic implantation was 83% in experiment and 33% in pre-experiment and that of subcutaneous implantation was 29%. For this, on the one hand, we have not gotten the most vigorous tumor cells because of our poor experience and, on the other hand, many rabbits die of diarrhea because of dampness and poorly ventilated animal room as well as rabbits of unsuitable weight and age. In order to increase the successful rate, it is very important to pay attention to these implant technologies. First, we should get the most vigorous tumor cells, the mother of which is no more than 21 d after being implanted and which is observed to be pale or resembling fish flesh and is easy to separate from the tumor. Second, we should choose an appropriate implanting spot, reduce bleeding and prevent abdominal cavity implantation. Finally, clean, ventilated, dry living environment and healthy, strong rabbits are also very important.

Diffusion is caused by the free movement of water molecule, known as “Brown motion”. It is able to change the intensity of local magnetic field around hydrogen proton so that its phase position in magnetic field is changed. If we add a powerful polar and quick switching gradient radiofrequent (RF) pulse, we are able to amplify these phase changes so that we can detect water molecule diffusion motion, known as diffusion-weighted imaging (DWI). The signals on DWI are low when water molecule diffusion motion is high while the signals on DWI are high when water molecule diffusion motion is low. VX-2 tumor is a solid tumor and its body mainly consists of tumor cell nests and other cells so that its water molecule diffusion motion is restricted. The signals of most VX-2 tumor on DWI are high and its margin is usually distinct (Figures 1A and 1B). When b value increases, the signals of VX-2 tumor become lower and lower (Figures 1A and 1B) but the ability to detect lesions becomes stronger and stronger. All the 15 VX-2 tumors showed high signals in our experiment and the signals of tumors were lower when b value was 300 than when it was 100 (Figures 1A and 1B). The amount of diffusion is determined by the diffusion coefficient (DC). Because DC is affected by many factors, the apparent diffusion coefficient (ADC) is used more clinically rather than DC. In our experiment, the mean ADC value of 15 VX-2 tumors was 1.87±0.25 while that of the normal hepatic parenchyma was 2.57±0.26. When b value increased, ADC value became low. The mean ADC value of VX-2 tumor was 1.87±0.25 when b value was 100 while it was 1.57±0.23 when b value was 300.

We thank the staff of the Radiology Department and the Laboratory Animal Center of the Second Xiangya Hospital for their help and support, especially Miss Ying-Si He.