AIM: To investigate the killing effect and radiosensitization of double suicide gene mediated by adenovirus on colorectal carcinoma cells.

RESULTS: After prodrugs were used, the survival rate of colorectal carcinoma cells was markedly decreased. When GCV and 5-FC were used in combination, the cytotoxicity and bystander effect were markedly superior to a single prodrug (χ2 = 30.371, P<0.01). Both GCV and 5-FC could sensitize colorectal carcinoma cells to the toxic effect of radiation, and greater radiosensitization was achieved when both prodrug were used in combination.

Colorectal carcinoma is one of the most frequent and life-threatening diseases throughout the world, especially in developed and industrialized countries[1]. Despite the improvements in surgery, radiotherapy and chemotherapy, the overall 5-year survival is around 50%[2]. Therefore, interest has been in the development of new treatment modalities due to the significant limitations of currently used local and systemic therapies for colorectal carcinoma. Gene therapy is a promising new treatment which can be used in combination with existing therapies[3]. The most extensively used strategy is suicide gene therapy. The suicide genes are those that have the ability to convert a nontoxic prodrug into a toxin within tumor cells when they are introduced into tumor cells[4]. Two of the best characterized genes are herpes simplex virus thymidine kinase (TK) gene and Escherichia coli cytosine deaminase (CD) gene. The enzyme TK efficiently phosphorylates nucleoside analogs such as GCV, and phosphorylated products interact with DNA polymerases, causing an arrest of DNA synthesis and fragmentation and thereby leading to cell death[5,6]. The CD gene is present in many bacteria and fungi but not in mammalian cells. The enzyme CD can convert the relatively non-toxic prodrug 5-FC to 5-flurouracil (5-FU), a metabolite highly toxic to mammalian cells[7,8]. Both TK and CD have been shown not only to kill transfected cells but also to exert toxic effect on neighboring cells, the so called “bystander effect”[9,10]. This is the phenomenon by which small molecules such as active drug metabolites are able to pass between cells so that untransfected cells are subjected to the same effects as those expressing the transgene. It has been shown that experimental tumors can be completely eradicated by cytotoxic gene therapy when only a proportion of the cells have taken up and expressed the relevant gene[11,12].

However, there are contradictions existing about double suicide gene therapy. For example, single suicide gene systems employing TK or CD may be preferable over combinations of the two[13]. In order to develop a protocol for an effective prodrug gene therapy of colorectal carcinomas, we used adenovirus-mediated gene delivery vectors to investigate whether CD-TK fusion gene systems could be combined to produce synergistic antitumor effects and whether CD-TK fusion gene systems could increase radiosensitization on colorectal carcinoma.

Adenoviral backbone vector pAdEasy-1 and shuttle vector pAdTrack-CMV-CD/TK were generous gifts of Cancer Research Institute in Xiangya Medical School of Central South University. Adenoviral vector was generated based on the principle of He et al[14]. Briefly, pAdEasy-1 plasmid was transformed into competent BJ5183 bacteria to generate pAdeasy-1 bacteria. pAdtrack-CMV-CD/TK plasmid was linearized with PmeI and transformed into competent pAdeasy-1 bacteria prepared by CaCl2 method to generate recombinant CD-TK adenoviral plasmid. HEK293 cells were transfected by lipofectamine with recombinant adenoviral plasmid which was linearized with PacI. Transfected cells were monitored for green fluorescent protein (GFP) expression and collected 7-10 d after transfection. After three consecutive freeze-thaw cycles, the virus was collected from supernatant. The titer of the virus was determined by plaque assay using HEK293 cells, and expressed as plaque-forming units (PFU). The presence of CD-TK fusion gene in recombinant adenoviral plasmid and viral DNA was identified by PCR with forward primer (5’-GTGAATTCAGGCTAACAGTGTCGAATAACGCT-3’) and reverse primer (5’-TCCTTGCGTGTTTCAGTTA-GCCTC-3’).

SW480 cells were plated one day prior to infection and infected with adenovirus at the desired MOI for 1 h at 37 °C, followed by the addition of growth media. In order to confirm the successful infection, RT-PCR was performed according to the manufacturer’s protocol (Promega Corporation).

A total of 1×104 infected (SW480/CD-TK) or non-infected cells (SW480) were plated per well into a 96-well tissue culture plate and allowed to adhere overnight. For prodrug treatment, medium was removed and replaced by a fresh medium containing 5-FC or GCV or both of them in different concentrations. Seventy-two hours later, cell survival rate was determined using routine MTT-method and absorbance value (optical density, A) was read on a BioRad plate reader at 570 nm wavelength. All experiments were performed at least in triplicate. Survival rate was determined by ratios of absorbance values from test conditions over absorbance values from non-infected cells. Survival rate = (A value of the test well/A value of the control)×100%.

SW480 and SW480/CD-TK cells were seeded at a density of 5×103 cells/well in 96-well plates with proportion of 1:1. GCV and 5-FC were added at a concentration of 10 and 100 μg/mL, respectively. Then routine MTT assay was performed and assays were tested at least thrice.

SW480 and SW480/CD-TK cells were plated in six-well tissue culture plate and allowed to adhere overnight. Then the medium was replaced by a fresh medium containing 100 μg/mL of 5-FC or 10 μg/mL of GCV or both. After 48 h, cells were exposed to a single dose of X-irradiation (0-6 Gy). Clonogenic survival was determined by counting crystal violet-stained clones 14 d after treatment. Cytotoxicity was assessed using cell survival curve.

All experiments were repeated at least three times, and SD or standard error (SE) was calculated. χ2 test was used to analyze the data of in vitro cytotoxicity and bystander effect assays. Survival curves were fit using SPSS 10.0 software. Statistical analysis and data fitting of radiosensitivity assays were performed using GraphPad Prism 4.02. A two-sided t-test was used to compare the means between sample groups.

HEK293 cells were transfected with the recombinant adenoviral CD-TK plasmid linearized with PacI. After 3 days, 30% of cells expressed green fluorescent protein (GFP) under fluorescence microscope (Figure 1). After three consecutive freeze-thaw cycles, the titer of adenoviruses was 1×1012 pfu/mL by plaque assays. We used the recombinant CD-TK adenoviral plasmid and adenoviral DNA as templates to amplify CD-TK fusion gene. The result showed that the CD-TK fusion gene was present (Figure 2). 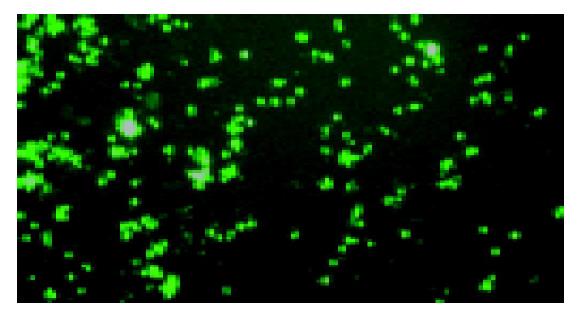 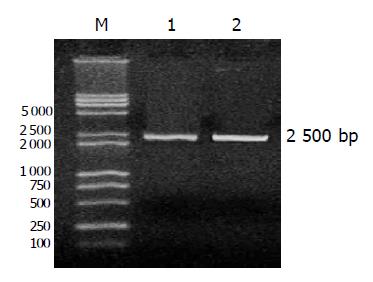 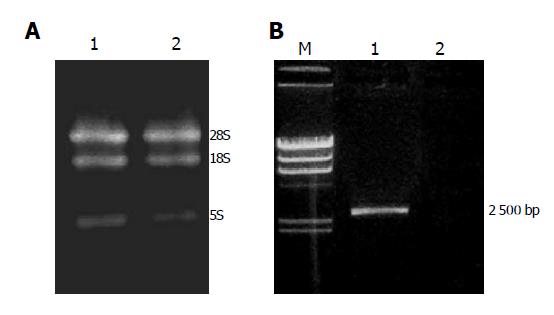 To determine whether double prodrugs could enhance the cytotoxicity of suicide gene in vitro, SW480 cells were infected with the recombinant adenovirus containing CD-TK fusion gene and their sensitivity to prodrugs was compared using MTT assays. As shown in Figure 4, both prodrugs yielded killing effects on SW480/CD-TK cells in a concentration-dependent manner. The sensitivity of SW480/CD-TK cells to 5-FC+GCV was greater than that to 5-FC or GCV alone (χ2 = 30.371; P<0.01). To achieve the equal killing effect, lower doses of 5-Fc+GCV should be used. These results demonstrated that double prodrug therapy was superior to a single prodrug. From Figure 5, we found that both GCV and 5-FC had no significant effects on non-infected SW480 cells compared to the control (χ2 = 6.540; P>0.05). 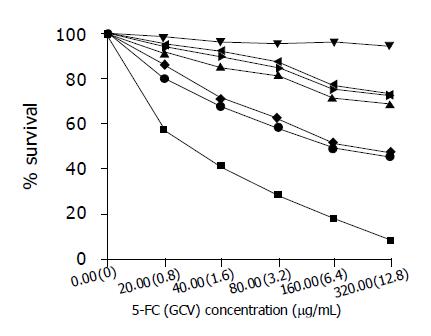 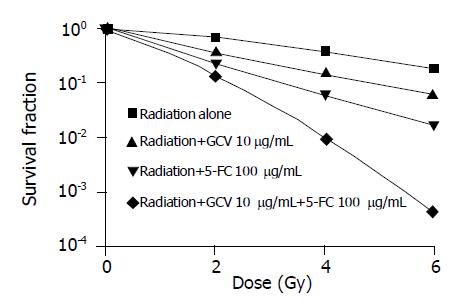 Figure 5 Effects of 5-FC and GCV on radiosensitization of SW480/CD-TK cells.
Bystander effect

SW480/CD-TK cells exhibited a bystander effect when mixed with non-infected SW480 cells. The results showed that the cell inhibitory rate was 75.3±6.8% when both prodrugs were used. The inhibitory rate was 39.3±5.4% and 32.6±6.3%, respectively when 5-FC or GCV was added alone, demonstrating that 5-FC and GCV could be combined to achieve synergistic effect (Figure 5).

For radiocytotoxicity studies, SW480/CD-TK cells were treated with fixed concentrations of 5-FC or GCV alone or both for 48 h prior to irradiation. The SERSF2 of SW480/CD-TK cells was 1.86 for GCV, 2.96 for 5-FC and 5.05 for both GCV and 5-FC, respectively. Although GCV or 5-FC alone sensitized the tumor cells to radiation, 5-FC and GCV in combination had a more radiosensitizing effect than a single prodrug (P<0.01).

Insertion of genes that activate pro-drugs to produce cytotoxity in tumor cells is considered as a potential therapeutic strategy for cancer treatment. As demonstrated before, double suicide gene therapy is important in controlling tumor growth, reducing cell survival and eradicating tumors such as gliosarcoma[15], mammary adenocarcinoma[16], pancreatic cancer, prostatic[17] and ovarian cancer[18]. We transferred CD-TK fusion gene into human colorectal carcinoma and investigated the in vitro efficacy of single and combined prodrugs. The results showed that CD-TK fusion gene had a killing effect on colorectal carcinoma. Although each single prodrug effectively kills tumor cells, prodrugs in combination could have a more powerful killing effect (P<0.01). In addition, the advantage of combined prodrugs can also be appreciated by reduction of dose. Taken together, our study demonstrated that strong synergism occurred when tumor cells expressing CD-TK fusion gene were treated with 5-FC and GCV in combination.

Our study also found that SW480/CD-TK cells exhibited a bystander effect when 5-FC and GCV were used alone or in combination. The bystander effect represents the ability of tumor cells expressing a prodrug-activating enzyme to eradicate neighboring nontransduced tumor cells following prodrug treatment[19,20]. We found that improvement in bystander effect was achieved by double prodrugs. In culture, the bystander effects of these prodrugs probably result from transfer of active metabolites of prodrugs from enzyme-expressing cells to nontransduced tumor cells, either by facilitating diffusion in the case of 5-FC or through gap junctions or apoptotic vesicles in the case of GCV[19,21-23]. The synergy bystander of double prodrugs is important especially in in vivo gene therapy, because it can decrease the disadvantage of low gene transfer efficiency and augment the antitumor effect of suicide gene[24].

In humans, treatment of advanced tumors usually requires a more rigorous approach, involving several different modalities. In this regard, we explored the possibility that combining suicide gene therapy with radiation therapy might result in enhanced cytotoxicity, thereby providing a more effective means of eliminating tumor. Our results demonstrated that suicide gene therapy could sensitize tumor cells to radiation therapy. 5-FC and GCV could independently potentiate the killing effects of radiation. Even greater radiosensitivity was observed when both prodrugs were used in comparison with a single prodrug. The advantage of this approach is that it is possible to decrease radiation dose and minimize damage to normal tissues[25]. Suicide gene therapy and radiotherapy produce a synergistic effect and make the combined therapeutic effect even greater[26].

Although current gene therapy techniques are potentially powerful therapeutic tools, practical clinical application of these techniques remains to be studied[27]. One of the rate-limiting factors affecting gene therapy is the development of a safe and reliable vector that can insert the desired gene into the target[28]. Adenoviral vectors can facilitate highly efficient transfection of therapeutic genes into tumor cells. Adenovirus has several characteristics that make it ideal for use in tumor gene therapy. For example, since adenovirus can be efficiently delivered into replicating or nonreplicating cells of epithelial origin, it may be ideal for in vivo systemic therapy. The safety of adenoviral gene therapy vectors has been proved in human trials[29]. In conclusion, CD/5-FC and TK/GCV can enhance radiosensitization of colorectal carcinoma.