Core tip: Fiber-fluorescence in situ hybridization analysis has the potential to reveal the orientation of duplicated and triplicated segments of chromosomes. Previously, we reported that interstitial duplications were aligned in tandem configurations, supporting the hypothesized mechanism of non-allelic homologous recombination; however, there were rare cases of inverted duplications. Further analysis is therefore required to fully elucidate the basic mechanisms underlying such duplications/triplications.

Chromosomal microduplication is a type of chromosomal anomaly. Although several chromosomal duplications have been reported previously, small microduplications that were invisible under the microscope were not recognized before chromosomal microarray testing was available. The only known microduplications were those involving specific genes, such as the peripheral myelin protein 22 gene (PMP22) and the proteolipid protein 1 gene (PLP1). Previously, we knew that patients with PMP22 mutations manifest Charcot-Marie-Tooth disease [Mendelian Inheritance in Man (MIM) #118220] and patients with PLP1 mutations show Pelizaeus-Merzbacher disease (PMD; MIM #312080); microduplications of these genes were revealed under the hypothesis that copy number gain of these genes may be related to disease occurrence[1]. Before the availability of chromosomal microarray testing, a targeting system was used to detect such duplications, including fluorescence in situ hybridization (FISH), quantitative polymerase chain reaction (PCR) and multiple ligation probe amplification (MLPA) (Table 1).

It is possible to detect the numbers of the targeted signals by FISH - whole subtelomeres can be analyzed in this manner[2]. Specific regions have already been analyzed previously using this method; e.g., the 22q11.2 region for DiGeorge syndrome and the 7q11.2 region for Williams syndrome. Although FISH is a powerful tool for detecting deletions of targeted regions, the biggest disadvantage is that it is difficult to detect small duplications owing to overlapping signals.

Generally, PCR cannot be used to quantify amplified fragments owing to saturation of amplification. However, in cases of linear amplification, quantity can be estimated by using a real-time PCR monitoring system. The chief feature of this system is that the target is fixed at the start of analysis[3]. Although MLPA is based on a PCR system, the targets of amplification are fused probes included in the buffer. Because various sizes of the amplicons can be included in the same tube, multiplexed targets can be measured simultaneously[4] and whole subtelomeric regions can be analyzed comprehensively[5].

At present, it is easier to detect genomic copy number aberrations by using chromosomal microarray testing as a comprehensive method. We subsequently realized that there are numerous microchromosomal duplications that are genetic causes for various diseases. 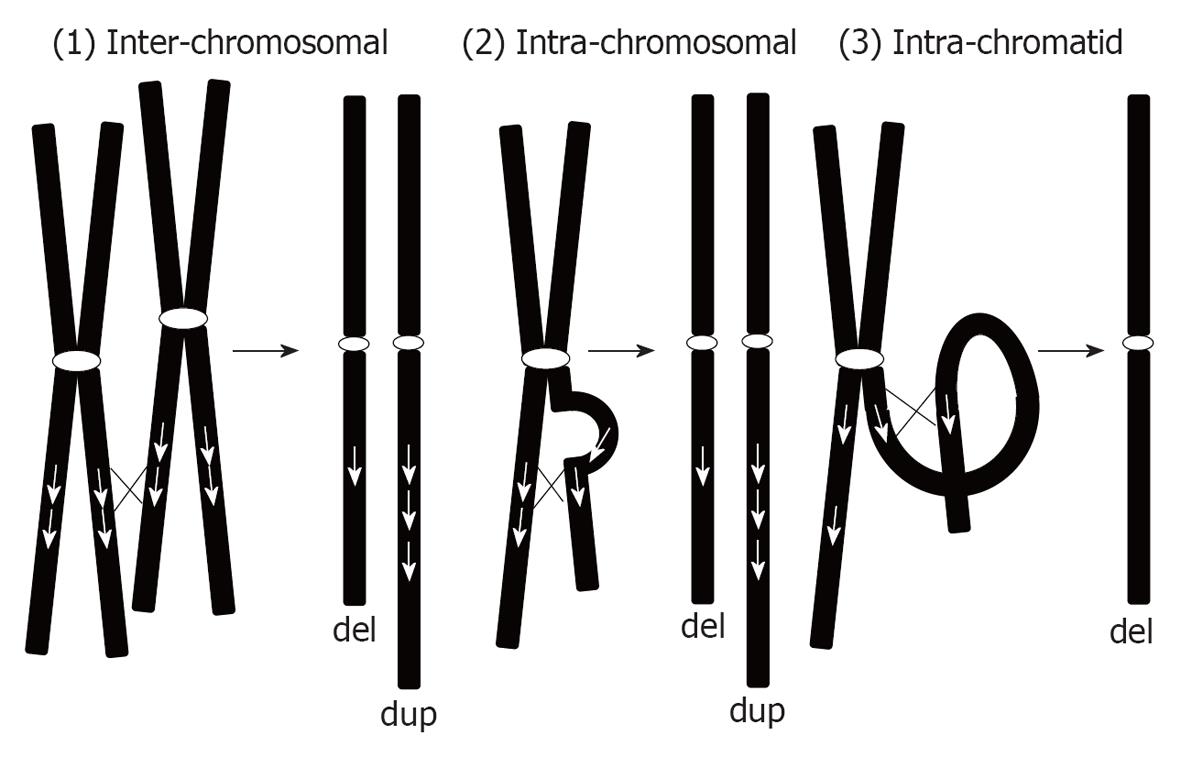 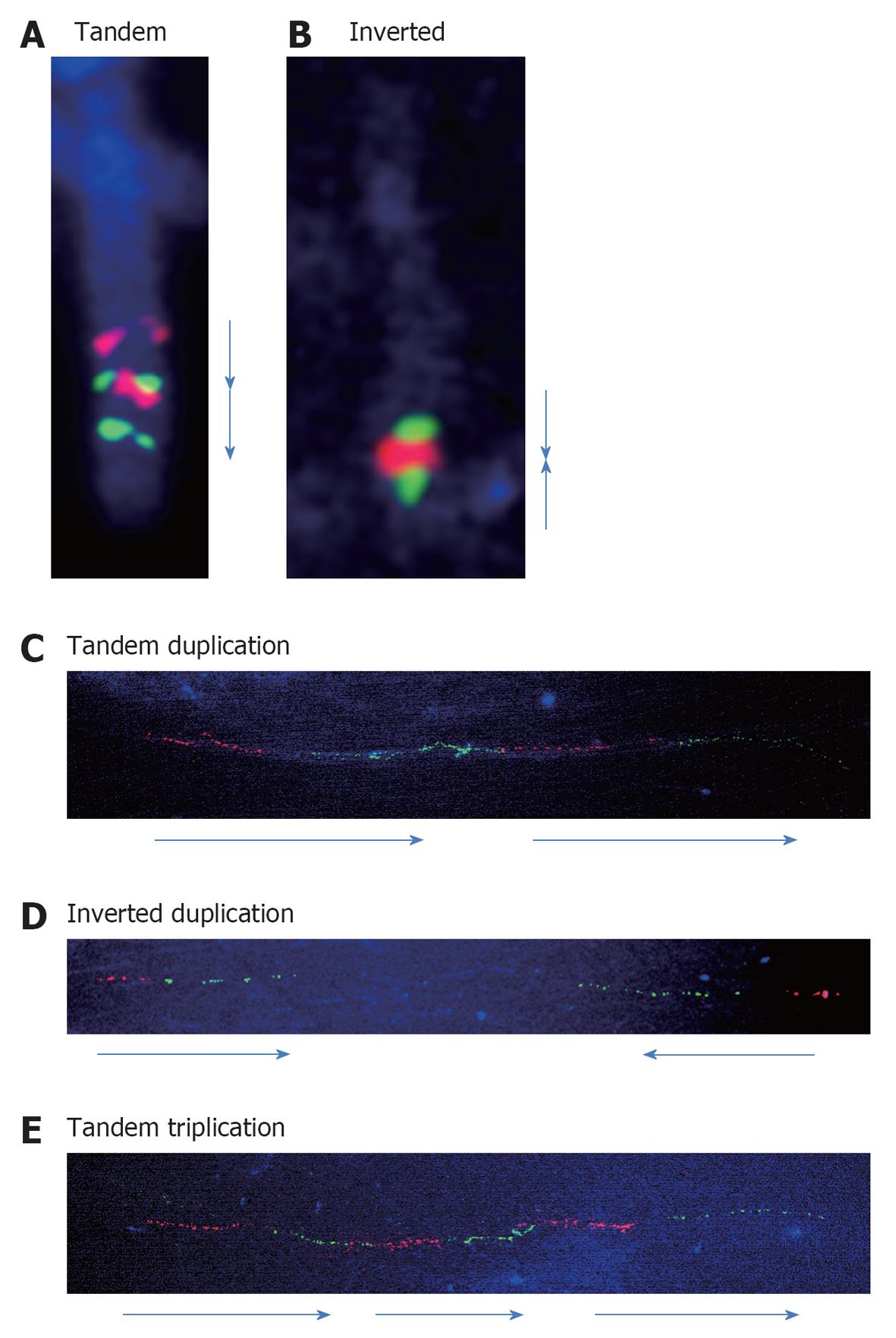 Compared to such interstitial duplications, subtelomere duplications are different because they are most commonly a result of U-type exchange between the sister chromatids during the meiotic process[8]. We observed inverted duplication and deletion in the 10q26 region[9]. Inverted orientation was confirmed by FISH in this case (Figure 2B).

Chromosomes are composed of 3-dimentional structures that consist of DNA and histones. Thus, targeted signals can be overlapped. In such cases, fiber-FISH analysis has the advantage of being able to detect the orientations of the duplicated segments accurately[11-13] (“fiber” means DNA fibers).

DNA fiber specimens can be prepared after separating chromatin structures by surfactants. To perform fiber-FISH analysis, traditional Carnoy fixation can be used. The method is as follows: Carnoy-fixed samples should be mounted on the surface of the glass slides and the slides should be immediately dipped into sodium dodecyl sulfate solution and then slowly pulled out. Consequently, the separated DNA fibers can be fixed onto the surface of the glass slides.

The same probes used for standard FISH can be used for fiber-FISH. Compared to standard FISH, targeted signal intensity is extremely weak. Because live signals are not visible by microscopy, long exposure time is required for signal capture. To capture standard FISH pictures, interphase nucleus or metaphase labeled by DAPI can be used as landmarks; however, there are no interphase nucleus and metaphase in fiber-FISH specimens. Thus, it is necessary to search the entire surface of the slide to detect signals.

Not all fibers show the same rate of extension on the same slide. This is dependent on the duration of the dip into the surfactants solution. If the length of the targeted fiber was too long to be captured in a single field of view, not all the target signals can be captured in the same field of view. It also depends on the size of the targeted duplications. If signals can be successfully captured, the directions of the fragments can be determined.

In terms of the clinical point of view, detection of microduplication orientation is not a suitable strategy for clinical analyses. Thus, fiber-FISH analysis is a specialized method for research work.

Orientations of the duplicated segments

Almost all duplications analyzed previously showed tandem configurations, as seen in cases of large duplications visible by general FISH analysis. The only exception was a benign copy number gain identified at the Xp22.31 region that included the steroid sulfatase gene (Figure 2D)[12]. This may indicate that the mechanism of the copy number gain in the benign region may be different from that of the pathological CNV.

In conclusion, as a result of the wider adoption of chromosomal microarray testing as a diagnostic tool, many genomic copy number gains were found to cause multiple congenital anomalies and intellectual impairments. Thus, this is just a starting point to understanding the mechanism of such genomic copy number gains. For this purpose, we should accumulate more cases of duplications and triplications and analyze the orientations of the segments.